Marx & Philosophy Review of BooksReviews‘Socialism in Marx’s Capital: Towards a Dealienated World’ by Paresh Chattopadhyay reviewed by Görkem Giray 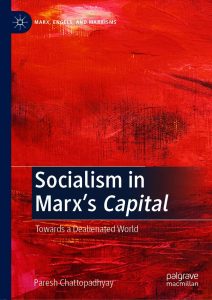 Paresh Chattopadhyay
Socialism in Marx’s Capital: Towards a Dealienated World

Interpretations on Marx’s account of socialism are usually based on the works in which his views on the post-capitalist society are expressed explicitly, such as his Economic and Philosophic Manuscripts of 1844, Comments on James Mill, The German Ideology, and The Critique of the Gotha Programme. Paresh Chattopadhyay’s Socialism in Marx’s Capital: Towards a Dealienated World appears as a promising and unusual attempt, since it aims to expound on Marx’s ideas on socialism by appealing to his Capital. Chattopadhyay’s primary motivation in the book is deducing the material foundations and features of the socialist society from Capital. The secondary accompanying motivation is an accusatory criticism of the 1917 October Revolution and, in particular, that of Lenin.

The first chapter aims to show that Marx’s economic work, which presents a comprehensive and thorough critique of the bourgeois political economy, is unique in comparison to the work of classical political economists. The second chapter focuses on the key concepts of Marx’s economic theory such as capital, alienation, wage labour, surplus labour, as well as the antagonisms, contradictions and crises of capital to make sense of his distinctive approach. Chattopadhyay provides a whole raft of page-long quotations from Marx, which makes this chapter structurally quite different from the others.

In the third chapter, the writer elucidates his approach to the transition from capitalism to socialism. Credit has a prominent role in this transition, because it results in the transformation of private capital to social capital, in other words, the socialization of the capital invested in production. Chattopadhyay defines this as ‘the sublimation/negation (Aufhebung) of capital as private ownership within the limits of capitalist production itself’ (59). The stock company form is depicted as ‘the result of the ultimate development of capitalist production’ that ‘is a point of transition toward the reconversion of capital into the ownership of [associated] producers’ (60). Under these conditions, the industrial capitalist appears as a ‘functionary without any link with capital,’ ‘an agent of the labour process in general,’ and ‘a wage labourer’ (64), which is why the capitalist ‘disappears from the process of production’ (65). Sublimation of the capitalist mode of production within the capitalist mode of production, therefore, creates one of the contradictions from which the future society arises (69). However, Chattopadhyay’s intention to show that this course of progress is an inevitable preparatory stage (70-72) implies an evolutionary, economic determinist tone in his approach to the overcoming of capitalism.

Chapter 4 deals with 20th century socialisms, which Chattopadhyay claims ‘have been marked by the absence of democracy’ contrary to Marx’s understanding of socialism as a democratic body (76). This antidemocratic tradition of single party rule is mostly attributed to the Bolsheviks under the leadership of Lenin. The writer criticizes the concepts of the vanguard party and of bringing consciousness to the working class from the outside. In opposition to these Bolshevik theories, Chattopadhyay argues that Marx was a firm believer in workers’ self-emancipation and never claimed to guide the workers (77) and advances instead a rather well-known argument that Lenin describes as ‘spontaneity,’ that is, the self-liberation of the working class in the labouring activity without any need for an intervention from the outside: Accordingly, the contradictions of the mode of production will make workers gain class consciousness by themselves and lead them to overthrow capitalism.

Chapter 5 starts with an elaboration of the relation between socialism and emancipation but then turns out to be a critique of the October Revolution. Lenin is accused of not justifying ‘his reason for a socialist revolution […] in terms of the materialist conception of history’ (79), because, Chattopadhyay explains, ‘Russia in 1917 was one of the most backward countries of Europe dominated by pre-capitalist social relations; the industrial working class did not reach even ten percent of the labouring population’ and the revolution erupted long before the conditions of a socialist revolution could materialize (104). According to Chattopadhyay, although Marx sees capitalism as a transitional stage, Lenin shifts this transitional stage into socialism by distinguishing socialism and communism from each other – which are supposed to be identical (98) – under the conditions of a less developed capitalism in Russia. Therefore, Bolsheviks are wrong to intervene in the developing capitalism in Russia through the October Revolution, and they swerve from Marx’s idea of socialism and social revolution (75).

Chapter 6 deals with the freedom of social individuals in the future socialist society. Alienated and fragmented individuality will be overcome in socialism through two consecutive stages in history: The first is the stage of personal dependence in pre-capitalist societies and the second is that of personal independence with material dependence in capitalism. This socialist society is characterized as a society free from classes and their antagonism; it is the (re)union of free and equal individuals who produce in and for society, in which the total labour is distributed among the members of the association (124-127). However, socialist society finds its prerequisite material conditions in the creations of capital (90-91, 127, 129). Otherwise, all attempts for a radical social revolution would be ‘Don Quixotism’ (129) just like the October Revolution.

Although his effort to derive a conception of socialism from Marx’s Capital is an illuminating attempt, I think Chattopadhyay’s critique of historical political events on the aforementioned basis has problems. Marx excludes the political aspect of the class struggle from Capital to an extent in order to lay bare the laws of motion of the capitalist mode of production and the tendencies of capital accumulation in its normal course. Chattopadhyay criticizes the October Revolution on the basis of this restricted framework derived from Capital and promotes a mechanical, economic determinist theory of social transformation, mostly abstracted from the political content. However, as Ellen Meiksins Wood argues, historical materialism is not economic or technological determinism; its strength lies ‘not in any unilinear conception of history but, on the contrary, in a unique sensitivity to historical specificities,’ and the socialist project does not necessitate ‘a theory of history according to which socialism is the culmination of one universal pattern of historical evolution’ (Wood 2000, 122).

While the Soviet Union is not exempt from criticism, especially in such areas as bureaucratization, bulkiness, and inaction for the withering away of the state apparatus merit criticism, Chattopadhyay’s description of Lenin’s State and Revolution as a manual of state capitalism (107) is highly questionable. Accusations of being anti-democratic, authoritarian, and statist, as well as those of supporting ‘state ownership of means of production’ (107) in contrast to what Marx envisages in socialism, seem inaccurate, and arise from a neglect of political writings by Marx –and also Engels– on the proletarian revolution. In one of these early works, The Communist Manifesto, Marx and Engels describe the first step in the revolution as to ‘centralise all instruments of production in the hands of the State, i.e., of the proletariat organised as the ruling class’ (Marx & Engels 1976, 504). This is not a temporary view, and later on, Engels emphasizes in Anti-Dühring that the ‘proletariat seizes political power and turns the means of production in the first instance into state property’ (Engels 1987, 267).

Chattopadhyay condemns any kind of centralization of power and instead approves of participatory democracy – as in the Paris Commune – which allows for the direct rule of the proletariat having seized power as a class of the immense majority (81-84); however, in a letter to Kugelmann, Marx designates one of the prominent mistakes of the Commune as The Central Committee’s surrendering ‘its power too soon [emphasis added], to make way for the Commune’ (Marx 1989a, 132). To add, in his letter to Liebknecht, Marx suggests that precious moments to seize a possible victory were lost ‘by the election of the Commune, the organisation of which, etc., cost yet more time,’ so as to evade appearing usurping power (Marx 1989b, 128).

Moreover, Chattopadhyay makes Marx’s theory of a socialist revolution converge to that of anarchists (120) without any mention of Marx’s writings on Bakunin’s Statehood and Anarchy and the former’s discussions with the anarchists. Chattopadhyay caricatures the debate against anarchists by showing it as arising from the attitudes of the Bakuninists in the International Workingmen’s Association (122) in order to trivialize the role of the state after the revolution – such as the use of ‘forcible means, that is to say, governmental means’ as long as the capitalist class exists (Marx 1989c, 517). Nevertheless, Marx’s position in the debate with Bakunin and other anarchists offers us the outlines of a socialist revolution and Lenin’s State and Revolution emerges as an elaboration of these outlines.

Furthermore, Chattopadhyay studiously tries to keep the state and the dictatorship of the proletariat outside of the boundaries of socialism – or communism. Because, according to him, ‘Marx was anti-state almost from the beginning of his adult life’ and ‘the existence of state and the existence of slavery are inseparable’ (120). He is right in his position if the state is taken as such. However, Marx’s understanding of the dictatorship of the proletariat is different. According to Marx, the workers’ state is only the first phase of the process that he calls communism. Contrary to the usual meaning of a state, its telos is withering away in this progress. For this reason, Lenin persistently emphasizes the character of the dictatorship of the proletariat as the state ‘which is no longer the state proper’ (Lenin 2014, 80) and argues that ‘Marx gives an analysis of what might be called the stages of the economic maturity of communism’ instead of fruitless disputes ‘[over] scholastically invented, “concocted” definitions [and] words (what is socialism? what is communism?)’ (Lenin 2014, 137).

Does this mean that there is a contradiction between Marx’s ideas on the transition from capitalism to communism in Capital and in his political writings? It only means that Capital tells us a different story, one that is independent of volitional processes and the political aspects of the ongoing class struggle, due to its framework deliberately limited to serve its specific purpose.