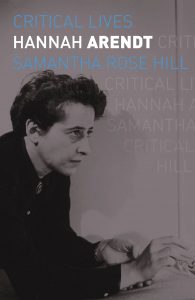 Marina Lademacher is studying for a PhD in Social and Political Thought at the University of Sussex. …

Samantha Rose Hill’s Hannah Arendt is a recent addition to the ‘Critical Lives’ book series which presents the work of ‘important cultural figures in the context of their lives’. Hill, as an assistant director of the Hannah Arendt Center for Politics and Humanities at Bard College (which houses Arendt’s enormous personal library) and accessible communicator of Arendt’s writings, is certainly well-suited to undertake this ambitious project. Blending biographical detail, sharp commentary and personal correspondence, Hill’s focused and fast-paced book contextualises Arendt’s major works by exploring the experiences which shaped the contours of her thought, engaging with a figure who continues to be widely read and debated as a guide to understanding contemporary political conditions. Yet Hill argues that Arendt would dispute the use of her ideas today as an analogy for our present crises. Though many of the problems focused on by Arendt are nothing new – whether the need for actual democracy and more spaces of freedom, to the problem of evil and crises of judgement – their unpredictable changes over time call for fresh thinking and understanding. With how to think always more important than a set of arguments on what to think, Arendt understands concepts not as ‘ends in themselves, but wellsprings from which to begin the work of thinking’ (10).

Born in Hannover, Germany in 1906 before moving to Königsberg aged 3, Arendt’s childhood was impacted by the loss of her father and fluctuating social and political circumstances that made East Prussia unsafe for Russian Jews like her family. These experiences engendered in the young Hannah a sense of rootlessness and the importance of grounding oneself and caused her to ‘retreat further inward, and her inclination towards always being the teacher became even stronger’ (23). Being taken as a child to see Rosa Luxemburg speak at a Spartacist rally ignited a lifelong fascination with this ‘independent, passionate woman with whom she could identify, someone who was committed to freedom and participation in public life’ (25). Like Luxemburg, Arendt considered the unequal treatment of women as an economic problem reflective of larger social and political problems that had to be addressed.

Drawn by the swirling rumours that ‘thinking had come to life’ (32), Arendt enrolled at the University of Marburg in 1925 to study with Martin Heidegger, who professed the intoxication of his love only two weeks after their first meeting. Their relationship, however, was blighted by frustration at his remoteness and ended in 1927. Horrified by Heidegger’s Nazi activities and actions as the Nazi-approved Rector for Freiburg University, Arendt did not speak to him for 17 years up until her return to Europe in 1949, where they spent two evenings together in a tense encounter of which little is known. Fleeing 1933’s Berlin for Paris without papers and with little French, for a brief time the ‘refugees in exile’ – involving, amongst others, Bataille, Breton, Merleau-Ponty, Sartre, Lacan and Arendt – forged a dynamic intellectual community amidst a fast-changing situation. Despite horrendous conditions at the Gurs interment camp where Arendt was imprisoned in 1940, she and co-inmates organised discussion groups and classes from English lessons to lectures on philosophy. The confusion and chaos resulting from the French surrender, however, provided a unique opportunity to escape, evading the return to normality only days later when the camp fell under the authority of the Vichy regime. A chance encounter in Montauban reunited Arendt with her second husband Heinrich Blücher (a communist influential in Berlin’s anti-Stalinist circles), but their close friend Walter Benjamin lacked an exit visa from France and committed suicide trying to cross the border into Spain. Receiving 2 of the 238 US visas granted, Arendt and Blücher travelled to the United States carrying in tow a set of Benjamin’s last writings including the Theses on the Philosophy of History.

The silence and complicity amongst so-called ‘professional thinkers’ toward the Nazification of cultural and political institutions in Germany made it clear to Arendt the importance of leaving the world of academic philosophy in order to think politically. Convinced that intellectuals were no more likely than anyone else to resist the tide of fascism, she was wary of forms of introspection and individualism that turned people away from the world. The failure of the nation-state system to guarantee basic rights for all human beings, moreover, influenced the ‘right to have rights’ principle formulated in her 1951 book The Origins of Totalitarianism. While not explicitly about the ‘origins’ of totalitarianism but the ‘elements’ which ‘crystallised’ into the phenomenal appearance of totalitarianism in Hitler’s Germany and Stalinist Russia, Arendt focuses her analysis on what makes totalitarianism a radically new form of government. Careful not to erase the distinction between these two regimes – the elimination of spontaneity, radical atomisation of individuals, destruction of the public sphere and the blurring of fact and fiction – are considered crucial to enabling the spread of totalitarian movements. Objecting to the sloppy use of terms like totalitarianism and nationalism ‘for all kinds of political phenomena’, Arendt understands loneliness (‘the experience of not belonging to the world at all, which is among the most radical and desperate experiences of man’) as the common ground of terror that destroys the space of solitude necessary for self-reflective critical thinking.

Toward the approach of the Frankfurt School and the tradition of Critical Theory, Arendt remained sceptical, stemming, as Hill suggests, from the irreconcilability of their respective influences. Adorno in particular, blamed for the failure of her first husband’s habilitation, inspired in Arendt an animosity both ‘personal and philosophical’. Whereas Arendt was influenced by ‘Aristotle’s conception of politics, Kant’s understanding of reason and judgement, Heidegger’s phenomenology and Jasper’ existentialism’ (59), the approach of Horkheimer and Adorno, as well as rejecting the ontological assumptions of the phenomenological tradition, drew on those areas objectionable to Arendt: Marxist economics, Hegelian dialectics and social psychology.

Published in 1958, The Human Condition examines the life of action from the perspective of human experience and activity in the world, and is described by Hill as a ‘book which demonstrates the activity of thinking itself’ (138). Criss-crossing disciplinary boundaries, it neither addresses a single political problem nor offers practical solutions for contemporary political problems, with W.H. Auden suggesting the book be read ‘almost like a dictionary of conceptual definitions: earth, world, labour, work, private, social, public, political, promises, forgiveness’. Coupled with identifying the fundamental activities of human life (labour, work and action), how they have changed over time and their corresponding conditions (natality, mortality, worldliness and plurality), Arendt draws on a set of set of spatial distinctions between private, social and public to argue that the socialisation of the public and private spheres restricts our freedom to ‘move between different the different realms of life and engage in human activity’. In developing the phenomenon of ‘world alienation’, signalling the twofold flight of man from earth into the universe and from the world into the self, Arendt uses this complex concept as a lens on a variety of interrelated transformations generated by capitalist economic processes including the accelerating destruction of nature and emergence of a ‘waste economy’, the instrumentalism of political life, and decline of shared experiences necessary for meaning-making.

Growing out of a series of lectures on ‘The Totalitarian Elements of Marxism’, Arendt’s central criticism levelled against Marx in The Human Condition is the elevation of the labouring activity to the fundamental activity of the human condition, and the apparent refusal to distinguish between work – meaningful, productive of useful and durable objects which make up the world’s artifice –, and labour – mind-numbing and repetitive tasks with a biological rhythm. Rejecting the so-called ‘myth of progress’ and perceiving Marx’s project as ‘not concerned with justice, but with freedom from labour’ (although Arendt wrote to Jaspers ‘I would like to rescue Marx’s honour in your sight’), Hill notes that Arendt’s relationship to Marx is ultimately ambivalent. Though the misreading of Marx’s thought across Arendt’s writings are documented at length elsewhere and exceed the purpose of Hill’s biography, they are worth pausing to revisit.

Contrary to Arendt’s assessment, as authors such as Hägglund have shown, freedom for Marx does not consist in a liberation from labour and the realm of necessity. Construing all forms of purposeful activity in terms of labour, whether freely chosen or coercive work, actual freedom involves being free from wage labour as well as being free to pursue meaningful ends for their own sake. Crucially too, Marx does not criticise capitalism in the name of an external ideal but does so immanently via the gulf between what liberalism professes and what it actually does. Thus Marx, like Arendt albeit differently, criticises dehumanising work processes, considers freedom as a value in and of itself, understands individuals as ends in themselves and individuality impossible in isolation, and views the realm of freedom and the realm of necessity as existing in an interdependent relationship. Conversely, Arendt’s own structuring of the human condition around the tripartite distinction of labour/work/action, and the somewhat ahistorical status granted to politics, raises a set of unanswered questions on the normative justifications and foundations relied upon.

Despite writing in the preface to Between Past and Future that ‘thinking itself arises out of the incidents of lived experience and must remain bound to them as the only guideposts from which to take its bearings’, on the social and political significance of racism Arendt’s blindness is stark. In a 1957 essay ‘Reflections on Little Rock’, Arendt criticises the 1954 Supreme Court decision in Brown vs Board of Education to mandate integration in schools, advancing the doctrine of ‘separate but equal’. Arguing that social equality must be won through conversation not legislation and that educational institutions are social spaces which must remain free from politics (the rhetoric of social equality being harmful for democratic life motivates a preference for the American over the French and Russian Revolutions), Hill describes how scholars have viewed Arendt’s writings on race ‘as a contradiction in her thinking between the condition of plurality and the right of discrimination’ (151). For someone familiar with the poison of hatred, it is surprising both that Arendt fails to realise that racial equality undermines the basic condition of politics, namely the ability to move freely between the different spheres of life, and that in doing so she inadvertently ends up reproducing the very hierarchies which prevent equal access to the public realm.