Marx & Philosophy Review of BooksReviews‘On Biopolitics: An Inquiry into Nature and Language’ by Marco Piasentier reviewed by Matthew Dermot Collins 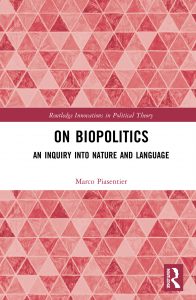 Marco Piasentier
On Biopolitics: An Inquiry into Nature and Language

Matthew Dermot Collins is a PhD Candidate at the University of Newcastle Upon Tyne. …

Posing the question of anthropological difference, Marco Piasentier argues that any attempt to imagine the human as inaugurating a harmonious marriage between nature and language conceals a disharmonious ménage à trois. This is because regardless of whether one approaches the question ‘What is human life?’ from a philosophical-philological or philosophical-biological perspective, one is always haunted by the spectre of anthropomorphism which spoils the unproblematic union of nature and language in the human. Consisting in the attribution of human characteristics to the functioning of nature, anthropomorphism amounts to the silencing of nature’s voice.

The philosophical-philological perspective is one according to which any thinking about the place of the human in nature is always mediated by language. According to the philosophical-biological perspective, an idea of life pre-exists and persists in spite of human language (1). The first three chapters of On Biopolitics consider the philosophical-philological perspective as embodied by two of the most prominent biopolitical philosophers, Michel Foucault and Giorgio Agamben, while the latter half of the book considers a physiological approach to the question of the human as elaborated elsewhere by Foucault, as well as by a number of naturalist philosophers such as Richard Dawkins and Daniel Denett. Piasentier’s effort is thus directed towards locating a space in philosophy ‘where the manifest [philological] and scientific images of the human being are fused into one coherent image.’ (117)

The first chapter presents a critique of the philosophical lineage of Martin Heidegger to which both Foucault and Agamben are attached. It grounds a significant part of the discussion which will follow in the rest of the book. Piasentier’s argument is that as a result of Heidegger’s linguistic turn, two voices are discernible in the Heideggerian consideration of the question of being: the better known ‘voice of conscience’ from Heidegger’s Being and Time, and a more concealed ‘voice of being’ (20). The voice of conscience calls Dasein (the being-in-the-world of the human) to appropriate the void, or more simply the possibility of death, as the essence of being. This voice is logocentric, insofar as the appropriation of the void entails ‘a voice more authentic and originary than everyday language’ (13). On the other hand, the voice of being is an appropriation of Dasein by the void, through the saying of language which is simultaneously the clearing or revelation of signification and the concealment belonging to the unsaid reserve of signification (18).

The second chapter then considers the effects of Heidegger’s linguistic turn for the relation of the human to its biological dimension. Here Piasentier is critical of Agamben for failing to fully appreciate the consequences of the linguistic turn. Piasentier agrees with Agamben that the voice of conscience powers an anthropological machine, according to which Dasein’s appropriation of the possibility of death is effectively an inclusive exclusion of biological death, by which the human becomes a being in excess of their biology through their ability to conceptualise death (33). However, for Piasentier, this reading of Heidegger as a metaphysical humanist conceals the ‘subtractive gesture’ inaugurated by the turn. After the turn, Dasein’s essence lies no longer in an appropriation of the possibility of death, but rather in the historical coming into existence of Dasein itself through language. As such, Dasein is less than a living being after the turn (36), insofar as it loses access nature through being unable to think beyond its own articulation of language.

Piasentier then moves to perform a comparative evaluation of Agamben and Foucault with regard to their conceptualisation of the biopolitical shift which occurs with modernity. For Piasentier, Agamben remains too wedded to a conception of ontology founded on the inclusive exclusion of biological life to appreciate the radical biopolitical shift which modernity signifies. Foucault’s biopolitical philosophy is therefore more successful for Piasentier, insofar as it utilises Heidegger’s conception of ‘biologism’ to define modernity as the abandonment of the search for a metaphysical definition of the human. Rather, the human comes to be defined as that which is non-metaphysical, or in other words, by its biological life alone (41).

Agamben’s counter to the anthropological machine is the ‘form-of-life’ or a life which is ‘neither a meta-physical soul nor a biological life, but […] a “life” which perfectly coincides with its use, or a soul that is only its modes.’ Piasentier’s argument is that the ‘form-of-life’ is ‘nothing but another name for Heidegger’s Dasein (44) after the linguistic turn, or in other words, a human life defined by the subtraction of biological life. Analysing Foucault’s conception of the human, Piasentier finds similarly that homo sapiens is defined as an ‘epistemological indicator’ for the operation of a specific cultural elaboration of knowledge/power and is thus essentially lacking any relation to nature. Piasentier concludes in the third chapter that whether as ‘form-of-life’ or’ epistemological indicator’, both Foucault’s and Agamben’s conceptions of the human reintroduce an anthropomorphic principle in nature in the form of ‘a pure will to signify’ (63-64) which continues to enchant the world through the revelation of signification and the silence of the unsaid.

Considering the argument of the first half of the book, Piasentier offers a cogent reading of Heidegger through the distinction of the voice of being from the voice of conscience which is convincing in-itself. However, the distinction seems to blur in the second and third chapter as the voice of being seems to lead, at least in the case of Foucault and Agamben, to an appropriation of the void as human essence, the essence being here a will to signify, or an essential lack with respect to nature.

Furthermore, while the support for Foucault’s conception of modernity is well-argued, there is at times a slight lack of clarity on the distinction between the Foucauldian and Agambenian ontologies. Indeed, the critique Piasentier levels against Agamben for reducing life to a will to signify is similar to the criticism Agamben himself levels against Foucault in The Use of Bodies, according to which ‘[t]he horizon of power relations and governmentality remains […] unsurpassable’ for Foucault (Agamben 2016: 108), thus raising the questions of whether both ontologies can neatly fit together under the heading of a will to signify.

In the second half of On Biopolitics, Piasentier considers the philosophical-biological approach to anthropological difference. This inquiry begins by elucidating an often disavowed aspect of Foucault’s thought which seeks a use of the body which pre-exists or escapes language. According to this approach, Foucault, through Nietzsche, attempts to conceive of biological purpose or normativity which would not result in a deified, or ‘intelligent design’ conception of nature. This biological normativity consists in the determination of the object through its deviation from the norm. Nevertheless, as Piasentier argues, ‘a diseased organic item is [still] supposed to perform a particular task even though the requisite capacity is absent.’ (75) As such human norms are still imposed on nature. Moreover, if life is defined as the erratic tendency of nature, then this hides a new ‘vital imperative’ according to which biology has intended humans to err (77), and thus Nietzsche’s ideal of ‘a “de-deified” conception of nature’ (68) remains unfulfilled in this approach.

The final two chapters then take up the question of a post-human conception of nature from the perspective of theories of natural selection. Piasentier critically examines selected effects (SE) theory, a particular formulation of Darwin’s account of natural selection in order to challenge the link presupposed by SE theory between selection and purpose or teleology. SE theory suggests that functions explain the existence of a trait, and that the effect of a function is a consequence of the existence of that trait (90). Piasentier argues that the trait is a retroactive consequence of the discerned effect, and that to consider the effect as the purpose of the trait illegitimately infuses the process of natural evolution with both teleology and normativity (97). The consequence of this is the reintroduction into nature of the anthropomorphic agential powers necessary to ground any norm.

The final chapter shows that a naturalistic worldview which attempts to prohibit its own reference to intentions or teleology fails. Taking up the naturalist philosophy of Richard Dawkins and Daniel Dennett, Piasentier highlights how in spite of their naturalism, both are forced to resort to the language of teleology, because of the analytic power afforded by teleological metaphors in analysing nature. The decision for such a tool inaugurates ’a problematic continuity between modern biology and natural theology.’ (108) The danger for Piasentier exceeds the use of teleological language and lies rather in the transformation of Darwin’s theory of natural selection into a grounding process. In other words, natural selection is used by Dawkins and Dennett to give a metaphysical significance to life unwarranted by Darwin’s theory, inaugurating an anthropomorphic ‘pure will to survive and reproduce’ (113).

The criticisms which Piasentier levels against Foucauldian normativity, SE theory and naturalism in the second half of the book are convincing. They are essential to any scholarship concerned with critical philosophy’s relation to science. Most importantly, it is by using Darwinian theory that Piasentier offers a critique of the implicit theology of naturalist ontologies. He therefore succeeds in his ambitious aim of instantiating a path towards the co-articulation of biological science and critical philosophy.

Piasentier concludes his book with a call to use the ‘lack of any ultimate ends for biological life’ as elucidated by Darwin in order to ‘start thinking about a new way to place our existence as living beings at the centre of political intervention.’ (114) One might suggest that here Piasentier is a victim of his own success. He so thoroughly demonstrates the barriers to removing teleological conceptions from both the philosophical-philological and philosophical-biological approaches that one now wonders whether philosophy is up to such a task.