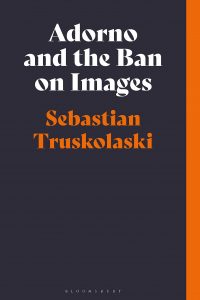 Sebastian Truskolaski
Adorno and the Ban on Images

Iaan Reynolds received his Ph.D. in Philosophy at Villanova University in 2021. His dissertation, …

In three thematically distinct but closely interwoven chapters, Sebastian Truskolaski organizes the work of Theodor W. Adorno around the Old Testament ‘ban on images’ [Bilderverbot], treating the figure of this ban as an overlooked ‘leitmotif’ of Adorno’s work. As the author notes, this monograph’s intention is not a comprehensive overview of Adorno’s work, but a ‘reorganization’ of his ‘uncomfortably systematic “anti-system”’ (8). Through attention to the figure of the image ban, Truskolaski claims, we can understand the way in which Adorno’s political thought differs from those of his contemporaries, as well as ours. Tracing out the metaphysical, theological and aesthetic implications of the prohibition on images, Truskolaski’s masterful treatment of Adorno’s project thus works against dominant interpretations of the latter as a politically quietist or normatively impoverished project. This book is valuable not only as a contribution to ongoing debates concerning the political orientation of critical theory, however, but also as a well-structured introduction to a wide range of Adorno’s concerns.

Beginning with Adorno’s invocation of the image ban in the section of Negative Dialectics titled ‘Materialism Imageless’, the first chapter elaborates this passage’s relation to Adorno’s criticism of the ‘official materialism’ of the Eastern Bloc. According to Truskolaski, Adorno attempts to develop a materialist dialectic – ‘he is a materialist and a Marxist after all’ (22) – without succumbing to the theories of reflection relied on by some exponents of this tradition. Truskolaski’s brief but informative reconstruction recounts how for Engels, the movement of the dialectic occurs not only in and for consciousness, but also within nature itself, setting up a dualism that materialist theory will struggle to overcome. From Engels’s perspective, the development of theoretical consciousness is understood as a ‘reflection’ of the dialectical unfolding of physical, historical and otherwise ‘objective’ processes (14-15). In Lenin’s Materialism and Empirio-criticism (1908), in which this commitment is further developed, the purported Berkeleyan subjectivism of Bogdanov and Mach is rejected in favor a theory of reflection that views the products of subjective consciousness as the ‘image’ of the objective world (18). Lenin’s and Engels’s dependence on a ‘trans-historical metaphysics of matter’ (32) gives Adorno an opening to criticize these versions of materialism for their undialectical conception of reflection. The ability of simple forms of consciousness to faithfully represent an underlying objective world is denied: ‘It is only by venturing through the proverbial desert of abstraction that something like materialism becomes conceivable’ (22). Truskolaski also extends this criticism to the works of Quentin Meillassoux, showing how Adorno’s philosophical materialism also complicates more recent attempts to think nature without humanity. According to Adorno, materialism’s desire to faithfully account for objective reality ‘means nothing less than a radical reconfiguration of the relationship between the “subject” and “object” of thought with respect to their socio-historical analogue: the relationship between “humankind” and “nature” in capitalist modernity’ (11-12).

The metaphysical iconoclasm of Adorno’s materialism destroys any image of redemption or harmony between humanity and nature as an ideological expression of the status quo (43). Adorno’s metaphysical use of the image ban is accordingly meant to provide the negative outline of a theoretical perspective more fundamentally oriented against the status quo. As Truskolaski ably shows here, Adorno aims not at the better or more rational organization of the social world, but at the end of human suffering: ‘the demonstration of the internal contradictions of – in this case – Leninist reflection theory is supposed to throw into relief the outline of what ought to be: not the blind insistence on a priority of matter, but a concern with the alleviation of suffering’ (37). In this book’s meditation on ‘imagelessness’, Truskolaski thus develops the central themes that frame the remainder of the book, most prominently those related to the ‘beating heart of Adorno’s politics’: his conception of a ‘utopia of cognition’, described as ‘differentiation without domination, with the differentiated participating in each other’ (47).

In the next chapter, Truskolaski shows how Adorno ‘critically repurposes theological terms’ in his construction of a negative universal history (59). Theological forms have an importance for the criticism of the present because they allow us to grasp the guises into which rational thought has settled. Investigating their ‘afterlife’ thus allows us to unlock the possibility of a non-alienated reason in negative form. According to Truskolaski then, not only traditional theological concepts, but indeed the dynamic of secularization itself – according to which religious terms return in a secular guise – are both inverted by Adorno: ‘theological terms return – transfigured – in the midst of a purportedly secular modernity as the improbable register most appropriate to a critique of this situation’ (55).

This chapter also addresses some of the prominent critics who fault Adorno’s project for political quietism (Jacob Taubes and Giorgio Agamben), or for its ‘normative deficit’ (Habermas). Truskolaski first discusses Habermas’ objections to Dialectic of Enlightenment, according to which Adorno and Horkheimer refuse to claim normative concepts such as justice or redemption, but at the same time wish to utilize them as regulative ideals (73). In a different set of critiques, Taubes and Agamben criticize Adorno for positing the standpoint of redemption as a ‘regulative fiction’ or an ‘as if’ judgment (101); by making utopia in-principle unattainable, Adorno seems to limit his theoretical scope to a contemplation of the appearance of redemption. It is in the light of criticisms such as these that a better understanding of Adorno’s inversion of theology becomes necessary. Since he views theology as a ‘guise of rationality’, Adorno’s approach to critique is able to indicate the standpoint of the appearance of the ‘wholly other’ without needing to specify its determinate shape. The trace of redemption found in the present world does not index a fictive utopia, nor an extant set of social arrangements, but the work of critique itself. The critical intervention specific to Adorno’s project thus seems to involve shifting from a register of normativity and justification to one concerned with bodily suffering.

In the final chapter, Truskolaski examines the aesthetic role of the image ban by considering Adorno’s unfinished Aesthetic Theory in relation to the treatments of natural beauty found in Kant and Hegel. After outlining Kant and Hegel’s respective accounts of natural beauty and situating their comments on the image ban within these accounts, this chapter shows how Adorno modifies the terms of the debate between Kant and Hegel – and its more recent discussion in Lyotard – through an idiosyncratic return to the concept of natural beauty. Whereas for Kant, the image ban served to express the limited power of the imagination, and for Hegel, to express the gap between historical forms and divine content, for Adorno ‘the significance of this figure […] might instead by seen as lying precisely in its “cognitive character”, that is, in the “Utopia of cognition” that it intimates in art’ (135). By ‘laying bare the very artificiality that lies concealed in a phenomenon like landscape’ (139), art is capable of expressing the way in which nature – that which is repressed – resists representation. The repurposing of natural beauty in Adorno’s iteration of the image ban thus serves the same iconoclastic purpose as this figure had served for metaphysics and theology, dissolving the forms in which the relationship between beauty and nature has been thought, in order to indicate their nonidentity.

The most interesting dimension of Truskolaski’s book is its forceful evocation of a political orientation in Adorno’s thought through an explication of the image ban – a customary site of his work’s depoliticization. This project is well-framed and evenly argued, and Truskolaski helpfully draws connections between Adorno’s thought and a number of contemporary debates. There are, however, some technical questions concerning the discussion of contemporary interlocutors, particularly when it comes to Meillassoux, whose rejection of correlationism also contains a critique of something like ‘reflection theory’. In this case it might have been interesting for Truskolaski to outline with a bit more detail the way in which Adorno shares an assumption held by Engels and Lenin: that critical theoretical work should aim for a certain kind of relationship between the subject and the object. What would the implicit critique of speculative realism found in Adorno’s project say about projects rejecting at the outset any commitment to the subject-object dyad (even as a nonidentity)? While Truskolaski’s critiques of Meillassoux’s metaphysics of matter are convincing, I wonder to what extent they engage with Meillassoux on his own terms, which might ultimately require a defense of ‘critique’ itself.

Another question raised by the book concerns the image ban’s relationship to an area of Adorno’s work less extensively discussed here – his social theory. In the closing ‘Reprise’, Truskolaski characterizes Adorno’s politics as ‘a means of delimiting the epistemic, ethical, and aesthetic conditions under which a life free from domination might become conceivable’ (151). With this characterization in mind, how are we to read Adorno’s discussion of ideology, for example, or his interventions into social psychology? Is Adorno’s reticence to designate nonideological consciousness related to the image ban? Aren’t there social conditions under which a life free of domination might become conceivable? Or, if we take Truskolaski’s framing seriously, are these conditions always articulable in epistemic, ethical or aesthetic terms? Particularly intriguing is the possibility that the structural feature of the image ban – the way it allows Adorno to chart a course beyond seemingly intractable alternatives through an appeal to the nonidentical (e.g. expressed through the ‘feeling of resistance’ (147), or the felt wrongness of bodily suffering) – might improve our understanding of the resistance to right wing politics. If fascism lives on partially through the lack of self-reflection pervading postwar industrial societies, as Adorno claims elsewhere, how can the ‘labor of critique’ or ‘labor of the negative’ (40, 74, 151) contribute to the social possibility of reflexivity? If the image ban [Bilderverbot] prevents critique from positing illusory forms of harmony, how can we conceive the social possibility of educational formation [Bildung] without these kinds of images? How could the unrepresentable be incorporated into a theory (and indeed a practice) of education?

It is a strength of Truskolaski’s work that it facilitates the process of such questions coming to light. He has provided not only scholars of Adorno’s aesthetics, but also those with any level of interest in the latter’s work, with the kind of meticulous reading of its core dimensions that only a tightly focused study can provide. His work will be useful not only to those who work on Adorno and the Frankfurt School more generally, but also to anyone with an interest in the theoretical and practical challenges facing the struggle toward a world free of exploitation.