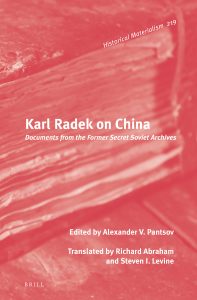 Sometimes, the greatest theoretical works come to us in the form of lectures rather than systemic books. This is the case with Karl Radek, whose lectures on the Chinese Revolution have recently been published by the Historical Materialism book series. Stenographic copies of Radek’s lectures given at the Communist University of the Toilers were discovered by Alexander Pantsov in the Soviet archives, which had been kept secret for over ninety years because of Radek’s involvement with the left-opposition. Along with other recent books such as Mao Zedong Thought by Wang Fanxi, Karl Radek on China provides us with important documents on how the left-opposition approached the Chinese Revolution.

The book has a helpful introduction by its editor Alexander Pantsov, a scholar who is well known for his book The Bolsheviks and the Chinese Revolution. In 1925, Radek was appointed head of Sun Yat-Sen University of the Toiler of China, which was a school set up to provide Chinese communists with Marxist political education. The book contains Radek’s lecture course from 1925-1926 in which he tries to teach his students how to apply Marxist theory to China’s history in order to identify its primary class contradictions. Throughout his lectures, Radek reminds us that he does not know Chinese and that his goal is to identify general trends in Chinese history in order to equip Chinese revolutionaries with the theoretical tools to produce a clear political strategy.

One of the primary questions that Radek addresses in his lectures is why capitalism failed to develop in China, and whether it was still a feudal social formation in the 1920s. A number of prominent Marxists held an orientalist view of China, which Radek tries to disprove because it mystifies social relations. Eugene Varga, for example, thought that the Chinese state had a non-repressive role and arose ‘from the necessity of regulating water supply, defence from floods and guaranteeing the irrigation of land’ (210). He then concludes that the absence of a repressive state prevented the Chinese ruling class from establishing capitalism and kept them stuck in a feudal mode of production. This mistaken view was held even in the Comintern, which sometimes claimed that the revolutionary movement was directed against antiquated feudal relations in order to carry through the Chinese bourgeois revolution.

Radek rejects this thesis by showing that the Chinese state arose because the ancient feudal nobles sought to subordinate the peasantry in order to establish feudalism. Contrary to the prevailing opinion at the time, Radek argues that feudalism was abolished in the third century B.C.E. and replaced with a mode of production in which land was privately-owned and commodities sold on the market by merchants. He claims that China could not develop capitalism because it became isolated in the fourteenth century due to the collapse of the Mongol empire, with the result that ‘Chinese merchant capital was confined to China itself, cut off from all foreign markets’ (40). Although Chinese manufacturing was highly developed in the fourteenth century, it could not further develop because of China’s isolation and its inability to engage in colonial expansion. While feudal practices continued to exist in the countryside, the peasants consumed the products of their labour and sold their goods as commodities on the market. Private land ownership combined with commodity market relations formed the nucleus of Chinese capitalism, which could only fully crystallise in the nineteenth century when the Treaty of Nanjing opened China to imperialist exploitation.

Radek devotes considerable attention to the emergence of a Chinese bourgeoisie. He notes that during the Qing Dynasty there existed large landowners connected to commercial capital, the state bureaucracy and tax collectors. Radek argues that a distinct mercantile bourgeoisie emerged in the nineteenth century when imperialist countries such as Britain began engaging with China. In order to gain access to China’s markets, the imperialists aligned themselves with Chinese merchants who were already embedded in capitalist social relations and had access to large amounts of land. This new Chinese comprador bourgeoisie ‘acted as an intermediary between foreign capitalists and the Chinese market’ (85) and advocated for imperialist interests in the Chinese state by bribing public officials. Radek notes that the Chinese comprador bourgeoisie was often a ‘junior partner’ of a large capitalist firm and had their own office, some autonomy over business decisions and was a key figure in all large transactions. The Chinese comprador bourgeoisie was important in getting business contracts for British, German and Russian capitalists so that they could build railroads, get access to China’s ports and import goods.

In great detail, Radek explores the process by which imperialist countries such as England, Russia, Germany and France sought to win strategic positions within China in order to dominate the region. He makes the controversial claim that by bringing China out of its isolation, imperialism played a progressive role by smashing ‘the wall of social stagnation which separated China from the rest of the world’ (188). However, he points out that this progressive role did not last long, for imperialism became increasingly aggressive towards China when a section of the Chinese bourgeoisie split and began adopting an anti-imperialist stance. The national bourgeoisie found its political leadership in the right-wing of the Guomindang and united around figures such as Kang Youwei, who wanted to create a modern bourgeois parliament, create modern industry in China and build a centralised army in a unified China.

In the 1920s, the Communist Party of China was in a formal alliance with the Chinese nationalist party, the Guomindang (GMD). Chinese communists sought to win over its left-wing members while isolating the right-wing elements aligned with the bourgeoisie. As Radek notes, ‘we entered it so as to win the petty bourgeoisie and the peasant who were still plodding along behind’ (356) the merchants, landowners and factory bosses. Although Radek supported this strategy, he was critical of rightist elements such as Stalin and Bukharin who were afraid of making radical demands that would isolate the national bourgeoisie. They argued that the entire Chinese national movement should be subordinated to the fight against imperialism, which resulted in the emergence of a ‘bloc of four classes’ consisting of the national bourgeoisie, the petty bourgeoisie, the working class and the peasantry. This caused Chinese communists to sometimes support strike-breaking, censor news about the shooting of workers by Guomindang forces and refuse to make demands for agrarian revolution.

Radek was very critical of including the national bourgeoisie in the united front, for the Chinese bourgeoisie was directly connected to the landlords that exploit the peasantry and cause their impoverishment. Thus, Chinese peasants cannot rely on the bourgeoisie to liberate them and will only suffer if they are included in the united front. As was continually demonstrated in the twenties, the Chinese bourgeoisie constantly struggled ‘against the national movement’s efforts to free the peasantry from its unprecedented difficult position’ (204) by opposing agrarian revolution. Even though the national bourgeoisie was against imperialism, its class foundations were founded on the exploitation of the peasantry and therefore prevented it from supporting land reforms. With the development of modern capitalism, Radek argues that the primary ally of the Chinese peasantry was to be found in the working class situated in the large industrial centres located in cities like Shanghai.

As events such as the Shanghai Massacre and the split in the Guomindang unfolded in China, Radek’s lectures and speeches take on an increasingly polemical tone, and eventually result in a sharp criticism of the Comintern strategy. In 1927, a major split occurred in the Guomindang, resulting in the leftists being concentrated in Wuhan under Wang Jingwei’s leadership while the reactionary rightists were centred in Nanjing around Chiang Kai-Shek. Stalin argued that communists should struggle to win a hegemonic position in the Wuhan government by uniting with leftist GMD members and using the GMD as a tool to advance the Chinese Revolution. Radek was very critical of this position because the GMD administration in Wuhan had ties to landlords and militarist interests. He worried that even the leftist Guomindang leadership would eventually betray the workers and peasants as soon as they began making radical demands. Aligning himself with Trotsky and Zinoviev, Radek argued that communists should withdraw from the Wuhan government, strengthen the independence of the Communist Party, arm the workers and peasants and create Soviets for the coordination of revolutionary activity. They should wage campaigns of exposure against the Guomindang leadership but seek to win over progressive rank-and-file GMD members by putting out the slogan ‘down with the landowners’. Radek points out that the united front of ‘the workers, peasants and the urban petty bourgeoisie is the guarantor of the victory of the Chinese revolution’ (356).

By having had the courage to use his position at the Communist University of the Toilers to criticise Stalinism, Radek caused a major debate to occur on Comintern strategy. Unfortunately, instead of engaging with his criticisms, the Stalinist leaders dismissed Radek from his teaching post, expelled him from the Communist Party and later exiled him to Siberia. Stalin and Bukharin’s policy of class collaboration was not just refuted by Radek in his lectures, but by the subsequent events in China that resulted in a civil war that killed thousands of Chinese workers, trade unionists and communists. Although Radek later capitulated to Stalin and betrayed his Trotskyist comrades, his critique of Stalinism in China remains tremendously important for understanding the politics of the left-opposition. The publication of Karl Radek on China is therefore tremendously important and will hopefully result in Radek being studied by socialist activists, Marxists and China scholars.