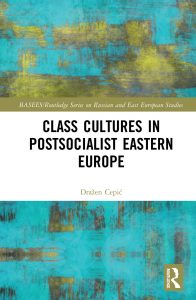 Within the discourse of transition of former socialist counties towards liberal capitalism, problems related to inequality and class positions are mostly neglected and rarely tackled. The exceptions are few, especially during the initial phase when anti-communist sentiment had been particularly strong. Later on, as the discourse of liberal capitalism expanded, other dimensions of social and cultural inequalities overshadowed the role of economic inequalities which since then have been under elaborated and underestimated. Opening up any of the topics related to poverty and social inequality after the fall of socialism, even in the most general way, has become an unpopular move. Therefore, Cepić’s Class Cultures in Postsocialist Eastern Europe, based on a doctoral dissertation, deserves special attention. While it could be contested whether the author’s stated ambition of providing a theoretical and methodological contribution to the topic and relevant fields is achieved (152), opening up the topic supported by qualitative empirical research is undoubtedly a valuable input and initiation into the examination of how class configurations have functioned and are functioning within transitional transformations.

From a theoretical point of view, the research has been designed following the Bourdieusian tradition (114). The application of Bourdieusian class theory is not consistent but rather apposite, combined with other convenient conceptual and methodological efforts. Unlike structurally focused theories of class or those pointing more to the material conditions on which class formation has been based, Cepić holds a post-structuralist, and more generally speaking culturalist, tendency of understanding and interpreting class in terms of identity. Despite this designation, however, the definition of class we find in the book rarely implies the intersectional dimension of crossing with other important categories of identity and does not often connect to gender, ethnicity, nationality or another kind of identitarian differentiation markers which have brought additional value to the conceptual and theoretical apparatus. Aspects of identity of particular interest to the author are various features of social life, values, identity building and friendship making, as the main dimensions of class (13).

The main question for which the author seeks to find answer is how social class has been transformed in Eastern and Central Europe (or more precisely, former Yugoslavia) since the fall of communism. In four chapters composed as mosaics, we have the opportunity to go through empirically collected material via a qualitative ethnographic survey for describing how people from both working class and upper middle class understand and represent various topics related to their class position and their relations to others, with the accent placed on manipulation within social boundaries and the changes in status of the working class population. To answer the main research question, the author places his study in the context of post-socialism aiming to explore ‘the reality of Eastern Europe’ and deal with different forms of post-socialist legacies (2). In this context, it is surprising that the position of Croatia is compared mostly to the West and we barely find reference or comparison to any other former socialist or former Yugoslavian country.

In the introductory part of the book, we find plenty of information, but not much actual data on what class formation looked like in Croatia and former Yugoslavia during the socialist period, which is the supposed point of comparison to the current state. The axis from which most of the conclusions are drawn on what class formation looks like in the contemporary period leaves an impression of not being thoroughly grounded. State socialist regimes are mostly described as designed to establish complete egalitarianism but unsuccessfully, while the effect of vertical mobility ceased to prevent elitism and obstructed mechanisms of distinction still in power. The improved status of the working class and the reduced gap in incomes as socialist legacies were not lasting, while the most visible effect of the transitional switch has been sharper class polarization between social strata (7).

On the other hand, the represented research is a rare and valuable effort to empirically ground network analysis in the form of a survey related to a widely unpopular attempt to impose a question of social stratification and legitimacy of its translation to wealth and status distribution. Not much research has been accomplished opening up the debate on how transition contributed to social inequality and commitment to a qualitative approach that gives insight into the lived experience of people deserves congratulation. The research sampled 65 subjects including in-depth interviewing pursued in the period from 2008 to 2011 in Croatia, lasting approximately one hour and accompanied by a list of 20 people in their social network and its interpretation organized in an ‘affective map’ (22). In general, the purpose of this procedure was to expose the patterns of sociability that have been enhanced by autobiographical data.

The focus of the first chapter is on the upper-middle class and how it uses symbolic and cultural mechanisms to establish social boundaries with others. The domain of culture exposes the class distinctions and allegedly served, even during socialism, to maintain class differentiation. For the people belonging to this social group, the cultural practices are especially highlighted and accentuated, since they play an important role in class definition. Most of the chapters in the book, unexpectedly, extensively elaborate on some additional, separated topic, which in the case of the second chapter is educational policy and reform pursued during socialism by Stipe Šuvar, better known as ‘šuvarica’. This reform aimed for directed rather than general training and inevitably included practical training while diminishing gymnasiums, which later on was understood as the destruction of the Croatian educational system. The other indicator included within this chapter was cosmopolitanism and its well-known role in establishing superiority for the upper-middle class.

The third chapter thematizes the stratum of entrepreneurs and private business openly despised in the socialist regimes, while after the fall of socialism, were uncritically worshipped even by troubled post-capitalist subjectivities. On the opposite side of the so-called ‘losers of the process of transition’ are those belonging to the upper classes who acquired new possibilities and mechanisms of social closure, with numerous young people showing not much regret over the past and adjusting quickly to the new circumstances (62). Other topics typical for liberal capitalism appeared relevant, such as interviews of the private and professional sphere but also an arising consumerism. The observation is given that what once has been considered shameful or something no one could be proud of in terms of using social ties to ease endeavours, now becomes ‘a source of pride and self-worth’ (75).

The subsequent chapter on the working class somewhat counterpoises the previous one and aims to demonstrate the bad side of the process of transition and the ‘transition losers’ to whom the change of the regime brought the downgrade of status, declining working conditions and unfulfilled expectations. The decline of the trade unions had devastating consequences for the position of the working class and their overall social status greatly suffered. An especially interesting peculiarity of Croatia is that even the word used to designate working people changed. In sum, the overall picture portrayed by the oral narratives of working people is far from optimistic. Nevertheless, the persons whose stories were included probably cannot be described as the most difficult destinies and characteristics for the period of the last few decades in the area of former socialist countries.

The final chapter deals with the cross-class sociability and the usage of social capital as a mechanism of exclusion and creating social distance, or in a more Bourdieusian manner, the distinction by means of culture and socio-economic success. Cross-class sociability enhances social mobility and is therefore important for mediating the sharp social opposition and counterpoising. Within this chapter is also the topic of war veterans, despite their stories not being very present in the book’s narrative but rather as some general and descriptive facts. Since the qualitative data does allow for stronger generalizations, we rather have a mosaic of chosen individuals without much chance of developing any reliable claims on the broader trends, nor do we have descriptive data supported by more infrastructural and statistical information, which would have give us better insight into the context of those subjects whose stories are portrayed.

Bearing in mind the author’s goal of providing a significant theoretical and methodological contribution, and reflecting on the book overall and especially on the given conclusions, one could develop quite a long list of what in the design of the research could have been different for this contribution to secure a sense of broader significance. However, there are at least three important questions to be raised whether the approach of the author regarding the general framework of the book has been the most appropriate one. Firstly, the most important question we might raise is whether the theory of Pierre Bourdieu is the most appropriate one for the post-capitalist epoch and the perspective of former socialist countries? Besides plenty of theses on the precariat, we don’t see this topic of discontinued biographies and life stories of the informants raised much. Therefore, the question of whether there is some more current theory better suitable for transitional post-socialist subjectivities could be seriously raised. Secondly, the circumstances of the fall of the socialist Yugoslav federation seems to be slightly neglected, including the complexities of intersectionality. Other identity differences and their impact on the life of subjects are not really debated in the study; nor do we see any presence of different ethnicities along with given class differences. This is also an important dimension whose omission makes the overall picture less complete.

Finally, the expectations that the term post-socialism could be used as an analytic category are simply too ambitious. It is not a theoretical category with the explanatory potential but rather a historical notion used to signify, above all, an epoch for the region, a period with no better conceptual term that might help this group of countries acquire a better definition of the shapes of social and political formations that define their situation. While in the conclusion, the author comes to accept the fact that this concept appears useful, we should be reminded that this is the only one we currently have for beginning to understand the contemporary class dynamics and formations.