Marx & Philosophy Review of BooksReviews‘What Times Are We Living In? A Conversation with Eric Hazan’ by Jacques Ranciѐre reviewed by Jake Parkins 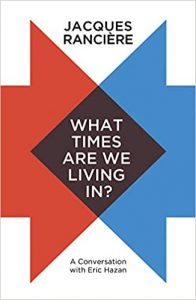 Jacques Ranciѐre
What Times Are We Living In? A Conversation with Eric Hazan

Jake Parkins currently works as a Library Assistant at Newcastle University Library. His area of …

Ranciѐre declares that ‘[l]iving without a government’ – with the latter’s political elites – ‘is certainly a great aim to have’ but viewing the representative democracy as a dying façade of given, underlying social forces is certainly not (4-10). So goes the central thesis of Ranciѐre’s timely analysis of our contemporary political world – ranging from Nuit Debout (“Stay Up All Night”) to Left populism (1-10). Despite the apparent sporadic order of themes, the interview follows roughly four, interconnected topics: firstly, the danger of reducing the current lacunas of the electoral system to symptoms of an underlying social system; secondly, whether there is any role for ‘globalizing’ perspectives of the world; thirdly, prospects of ‘resistance’ and alternative ‘strategies’; and fourthly, how does the world beneficially challenge the way we conceive of it and what is the role of Ranciѐre as a philosopher (32, 65, 73)?

The premise of Hazan’s discussion is whether, in light of the crisis of representative democracy across the world, Ranciѐre’s understanding of ‘democracy’ – that is, the assertation of equality, when those who are not accounted for assert themselves – is still important for understanding the world and whether having no government is fruitful (1-2, 10)? Ranciѐre’s retort is consistent with his previous work albeit with some surprising developments. He begins by stressing that one should avoid a symptomatic reading of this situation: there is no pathology of representative democracy that reveals the true socio-economic reality – such as class struggle –underneath it (4-10). Instead, ‘“[a]ppearances” are solid’ (7-8). Contra traditional Marxist approaches, this argument follows Ranciѐre’s idiosyncratic resistance to rendering ‘the political into an expression, or a mask of social relationships’ (1995: vii). Rather than viewing agents’ political thoughts and actions as autonomous from social conditions, theorists view them as the result of problematic social conditions that operate behind agents’ backs.

Why, then, do these electoral systems continue to exist? Why do people vote for candidates who fail to enact their electoral promises (10-11)? Ranciѐre provides two inter-linked reasons for this. Firstly, representation is not democracy per se, but a compromise insofar as the representatives – the political elite or professionals – assert themselves as being ‘naturally’ more capable of ruling and produce political people (the ‘electorate’ who subsequently vote for certain representative groups and reproduce the system) (11-12). Secondly, peoples’ ‘adherence’ to the electoral system relies not – at least in France – on ‘false belief’ in the mystifying narratives of politicians or the ‘media’ (14-15). Instead, it relies on ‘unbelief’ insofar as it spreads ‘discouragement’ of ‘revolutionary’ alternatives via the electoral system (14).  As such, citizens know what is going on and subsequently ‘vote’ (or do not vote) to display their ‘contempt’ for the system which attempts to make them ‘inferior’ – to assert themselves as capable people (14). This follows Ranciѐre’s ‘Jacotot’ method insofar as the lack of emancipation stems from people’s lack of ‘will’, rather than one’s intellectual capacities, as well as his broader critique of domination in terms of ‘organic’ and ‘coherent’ totalities (Ranciѐre, 1991: 12-13; 15).

While Ranciѐre limits the concept of ‘unbelief’ to French electoral politics, it can be useful for understanding mistaken approaches by liberals explaining why Northern, traditional working classes voted for Brexit and the Conservatives in the U.K. (14; Hanson, 2020). Many commentators and activists tended to provide symptomatic accounts to explain why these people voted – from being mystified by the media to an irrational protest vote due to their social conditions – alienating these voters (Oduor, 2020). While Steve Hanson (2020) implies that Ranciѐrian unbelief can beneficially account for the working classes’ simultaneous resistance to the system and their lack of belief in the possibility of radical change, he hardly emphasises the other key point – it does so without potentially stultifying or rendering them ignorant (Ranciѐre, 1991: 7, 38).

Despite its pervasiveness, this discouragement does not affect everyone, and the 2016 movement Nuit Debout stands as testament to this (23-24). However, Ranciѐre is unsure to what extent these movements have: a) avoided pitching the ‘political’ as a symptom or mask for underlying social forces; and b) created viewpoints that resist the current ‘political’ order of representative democracy (16).  On the one hand, for Ranciѐre, the 2016 movement ‘attested’ the idea that while there is workers struggle ‘and a principle of community’, work itself ‘no longer forms the world’ (18-19). Furthermore, the 2016 movement went beyond attempting occupy workplaces and education centres, instead it attempted to occupy ‘the vacant space of the city’ and to construct an entirely new ‘community’ – which simultaneously disrupts and creates something distinct from those created by the ‘electoral process’ (20-28). This trajectory fits with the Ranciѐrian notion of emancipation or equality (contra, say, Leninist seizure of state power): disturbing the ‘distribution of the sensible’ – alternative ways of recasting the foundations for, and living in, what we ‘perceive’ as having/not having a ‘part’ in our common world (30-31; Ranciѐre, 2004, 12-13, 85). On the other hand, since the 2016 movement attempted to discard the idea of a given, work-based social underlayer to pitch against the electoral system – thereby lacking foundations to ‘lean on’ – they paradoxically tended to revert to the view that the ‘system’ was on the verge of ‘collapse’ (20-21).

In light of Ranciѐre’s rejection of ‘domination as a coherent system’, Hazan wonders if one should avoid a ‘globalizing’ view of the state of the world – ‘a great black cloud’ constituted by authoritarianism, man-made climate change and ‘terrorism’ etc. – since it crudely combines ‘different situations in a great defeatist mash’ (32)? Ranciѐre argues that this ‘“defeatism”’ stems from actual historical defeats of the Left and spurs on this unhelpful ‘globalizing’ perspective (31-34). This latter globalising perspective begins with Marxism’s separation of two totalities: a) ‘action’ – one concerned with specific practices in relation to a plurality of interconnected ‘dependencies’; and b) ‘science’ – which grounds these practices to a singular base – such as an economic base in Marxism – according to a set ‘system of causes and effects’ (35-36). Following this, sociologists (e.g., Pierre Bourdieu) tended to reduce action to social or historical science and subsequently stunted action (37). Today it is post-Heideggerian forms of totality – from Badiou to Sloterdijk – that are Marxism’s successors: a ‘decadent world’ whereby democracy is symptomatic of commodity relations and thus requires ‘a radical turnaround’ (38-39).

In response to this form of globality which starts from the global – as opposed to starting from the particular – Ranciѐre offers his strongest indication of having a conception of ‘globality’ or ‘totality’ (he seems to use these terms interchangeably): admitting that ‘[p]olitics has always needed a certain globality’ and that one cannot individually deal with the ‘parts’ of the ‘great black cloud’ (35-37, 39). In short, Ranciѐre’s position is that demands of equality – such as employment rights – undermine our usual understanding of the relation between the ‘particular and the universal’ and therefore assert a global struggle via the particular (40-41). To unpack: when those who simultaneously have and do not have a ‘part’ make a demand, they disrupt and re-define our intelligibility of the world or ‘the common’ (Ranciѐre, 2004, 12-19; 41). Conversely, by trying to integrate particular struggles into a universal picture – toward a specific opponent, e.g., capital – theorists fail to consider that the very specificity of a particular struggle assumes globality (40-41). Along with being non-ideological and not hard-functionalist, a strength of Ranciѐrian totality is that it starts from the particular experiences of – and is visible to – ordinary agents.

The interview then shifts to the questions of resistance and strategy. While both interlocutors agree that creating ‘egalitarian forms of the common’ are inseparable from struggling against domination, Ranciѐre disagrees with the view that capitalism is the primary form of domination that needs to be overcome (55). Firstly, it is questionable whether capitalism is the form of domination that others – from gender to race – rely on. Secondly, again, it wrongly implies that capitalism operates ‘behind barriers of the state’ (57). Instead, capitalism is a) more entwined with state than ever before; and b) it is our very environment but not to the extent that it completely controls us nor that it forms the basis for ‘the collective intellect of communism’ (57, 69-70).

In light of capitalism’s encircling environment Ranciѐre thinks that our strategies must change (69-70). The strategies up to now – such as Left populism – ultimately maintain ‘inegalitarian logic’ insofar as it sets identified groups against one another (73). Rather, it should be a conflict of ‘worlds’ – of ‘equality’ and ‘inequality’ (p. 72-73).

The interview ends with Ranciѐre noting three ways that one’s conceptualisation of the world can be beneficially challenged (73-74). The first stems from critique received from one’s detractors, which, for Ranciѐre, he finds mostly unhelpful since his detractors hardly consider his philosophical blind-spots (74). The second challenge is from one’s objects of inquiry which Ranciѐre personally finds much more helpful. The third challenge is from the environment where one presents their theses and from the people one wishes to inspire. Ranciѐre boldly believes that he avoids challenges from the latter because he refrains from providing his addressees any ‘methods of action to verify’ (76). Rather, Ranciѐre ‘explain[s]’ the ‘world’ he inhabits (76). This is particularly interesting as Ranciѐre has historically refrained from providing positive, systematic frameworks for how philosophers should relate to their addressees. In spirit of his anti-explanatory/Jacotot approach, Ranciѐre argues that it is ‘up to them [the oppressed] to know what they want’ and what ‘meaning’ his discourse provides (76). For Ranciѐre’s it is this latter aspect of his approach that gives the oppressed ‘hope’ (76-77).

Despite the strengths highlighted above, there are at least two limitations. Firstly, although Ranciѐre clarifies that he accepts some form of explanation – a descriptive one – it is not entirely clear how explaining to agents how and why they have misunderstood their condition is necessarily stultifying and subsequently paralysing (see: Seymour, 2019, 231; 37). It seems possible for theorists explain their addressees’ misunderstandings while assuming that agents have the capacity to realise this themselves as e.g., Kate Seymour (ibid: 231-244) and Robin Celikates (2018: 8-9) do.

Secondly, while I am sympathetic to Ranciѐre’s claim that totalising approaches undermine one’s motivation for resistance, there could be examples of the contrary. For example, movements such as Extinction Rebellion potentially gain traction through their narrative of the potential total extinction of humanity. Perhaps these narratives only motivate already active members of the population – as Ranciѐre recently seemed to suggest (2021) – but more needs to be unpacked on how stultification operates.

Overall, beyond the limitations and remaining questions, Ranciѐre’s book is an excellent continuation of his demonstration to take the oppressed seriously, in an age so adamant to condemn them as “stupid”.