Marx & Philosophy Review of BooksReviews‘The Memeing of Mark Fisher: How the Frankfurt School Foresaw Capitalist Realism and What to Do About it’ by Mike Watson reviewed by Jack Dignam 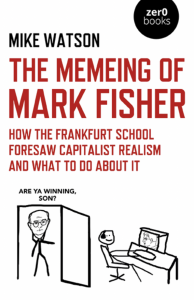 Mike Watson
The Memeing of Mark Fisher: How the Frankfurt School Foresaw Capitalist Realism and What to Do About it

In the introduction to The Memeing of Mark Fisher, Watson writes that the book is ‘laid out here in six more-or-less standalone chapters’, leaving the reader to assume that each chapter is self-contained and their consequences to be theorised independently. Yet, in his final chapter, entitled ‘Psychedelic Dreams: Marcuse, Fisher, and Acid Communism’, one finds a coherent vision that provides direction for the late Mark Fisher’s ‘Acid Communism’, a vision that synthesises the work found in the preceding chapters. Perhaps Watson’s comment is best understood as an attempt at modesty, then. Whatever the intention, however, his latest release is a testament to the importance of reading both the Frankfurt School and Fisher in light of our present conjuncture, not only theirs, and is an effort that is far from modest in its scope and consequence.

Building on his earlier work, also published by Zer0 Books and titled Can the Left Learn to Meme? ‒ in which various twenty-first century pop culture instances are investigated under the guise of a collective imagination, such as Netflix’s Stranger Things and its widespread resonance, the video series Don’t Hug Me I’m Scared and its propensity for millennial sensibilities and the inherent fraternity found in online gaming communities ‒ Watson depicts a constellation that forces us all to take seriously online leftist movements in light of a thorough reading of the Frankfurt School’s main proponents (Theodor Adorno, Walter Benjamin, Max Horkheimer and Herbert Marcuse) and, of course, Mark Fisher. Watson opens his work by situating it against the backdrop of a larger political moment, namely that which has come to pass since the death of Fisher in 2017: the lights of seemingly burgeoning left-wing movements in both the United States and the United Kingdom, Bernie Sanders and Jeremy Corbyn respectively, have been defeated, and number 45 has both started and finished his term as president. Covid-19, meanwhile, left all but the wealthiest of us looking down the barrel of (some of the) constraints that the working- and under-classes have been subjected to for far too long: ‘‘going nowhere, doing nothing, and with no forecast date of release from these prison-like conditions.’’ (1). We might say, then, that Fisher’s dictum that ‘‘the widespread sense that not only is capitalism the only viable political and economic system, but also that it is now impossible even to imagine a coherent alternative to it’’ (2010: 2), appears more tangible than ever, and its repackaging into memes throughout various Facebook groups ‒ such as the one founded, and eventually closed by Fisher ‒ and different internet forums ranging from Reddit to 4chan only reaffirms the impossible situation that the left finds itself in today: what do we do when the resistance against commodification has itself become commodified?

Watson’s answer lies in the battleground of online culture today, one in which he sees a warm hope for the online left in the tradition of modernist philosophical aesthetics. More precisely, Watson implores internet content creation as a cultural endeavour that could begin to open cracks in capitalism’s totalisation, which is fitting given that Watson credits many of the ideas found in the book to the online movement he co-runs, The Acid Left, and accords with Fisher’s final remarks in Capitalist Realism. Watson finds different remedies to our current impasse in the Frankfurt School’s large assemblage of essays, books and letters: Adorno provides direction for memes in the guise of artistic abstraction; Benjamin through the constellation of (digital) objects by which one can understand our current standing; Horkheimer via a rethreading of philosophising the (online) Other; Marcuse’s alliance with the student movements of the 60’s supplies an actual meatspace vision for a counterculture that the Left can tap into today.

Watson’s work, however, is approachable in a way these aforementioned theorists’ works often are not and injects a flair of humour that makes this easily recommendable to those not familiar with the theorists he draws from. As Watson writes in my favourite chapter of the book, ‘Benjamin and the Digital Flaneur’: ‘Undertaking The Arcade Project was akin to trying to understand the machinations of today’s data capitalism by trawling online shopping pages using a Windows 95 browser.’ (63).

Of course, such an undertaking brings to mind Fisher’s notion of hauntology in which our current cultural conditions for production are understood as an aggregation and extension of the past, and one can read this via the commodities of our conjuncture. This leads Watson to posit the question of whether ‘the audience [can] reconfigure history in new constellations given the proximity of power to the act of viewing in a data economy?’ (72) The left, says Watson, needs to compose the fragmented representations of reality found in the likes of memes, Youtube, Instagram, Netflix, etc. and to make from such a composition of the past and future a reformulated economic reality. In other words, the left is already equipped with all it needs to disseminate its politics to the wider world; we just need to seize the memes.

Such praise for an alternative, however, should not make the potential reader think that Watson glosses over the worse parts of the digital world today. Indeed, as Watson readily concedes, the internet may well confirm the Adornian proclamation that the culture industry grants us the freedom to choose what is perpetually the same through the data economy: culture is seemingly more monolithic than ever online, and the choke-hold that giant corporations like Facebook, Google and Twitter have on the web is not the only way in which this pronouncement manifests itself. Clickbait culture, which promotes Top 10 lists and supposedly trust-worthy headlines like ‘You’ll never believe…’ or ‘This … will blow your mind!’, is based on equating value with popularity rather than anything else. Similarly, search engines are inherently value-laden, asking us, ‘Did you mean … ?’ when we try to search for something out of the ordinary, and promoting web-pages based on a profile of the user, the page-rank and a whole host of other elements unbeknownst to the user through opaque algorithms, rather than the relevant search criteria alone. What agency can the left utilise today in opposing such a hulking infrastructure, then?

In reducing those of the left’s most fantastical desires to purely quantitative measurements, so that all desires can be easily satisfied, Watson argues that the behemoths of the data economy have provided us with the (ir)rationality needed: a passionate negation of the existing order that is constituted by an irrational act of consumption. In opposition to further fetishisms of online production ‒ that everyone can have their 15 minutes of fame, for instance ‒ online content production by the left contains the potential to stoke the contingencies for activities in the physical world that attempt to recover our desire and purifies it for the establishment of a communitarian politics. Indeed, Watson’s work, given that it was borne through online content production on the left, is a testament to the realisation of such a possibility. Therefore, ‘What the online left should be doing in the wake of covid is encouraging far-out creative output that challenges the tendency of the data economy to push us toward quantitative goals both online and in real life.’ (100).

Watson, while not affiliated with any third-level institution, presents a work that deserves to be read by both academics and leftists alike, a work that offers quick catching fuel to the fire that is the leftist imagination in 2021 – a much needed remedy for our present political climate, both online and offline. He is a digital heir to the Frankfurt School, the New Left and Fisher, and his next work should be eagerly awaited as we work to diagnose the ever-stranger times we find ourselves in.