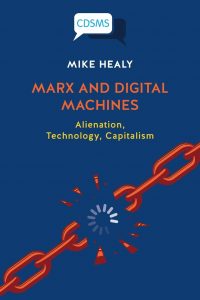 Ever since German philosopher Hegel discussed alienation and Karl Marx converted it into the sensible framework of the economics of capitalism, alienation isn’t really a new subject – many might even think all has been said. Yet, Healy’s exquisite book applies several recent frameworks of alienation to two groups of workers – IT workers and academics. His book delivers surprising insights and results. Healy has divided his book into eight short and very readable chapters starting with a conceptual chapter on “alienation”. The book’s key empirical chapters are on IT professionals.

Healy starts with a line that – to many might – signify alienation today when he says, ‘the iPhone controls me, I don’t control it’ (1). Surely, iPhones connect people to the Internet. In the background, however, runs something else. One of the founders of the Internet, Berners-Lee, ‘warned of the loss of control of personal data’ (1). Very likely, the hallucination of Internet privacy has always been an oxymoron, as Edward Snowden has shown us. Yet, processing our data has even worse implications as ‘data centre … contributes 19% of total carbon footprint using 30 billion watts and wasting 90% of the energy they use’ (1). Perhaps, some might think twice about this when carelessly checking tonight’s cinema schedule again, watching an online video, and reading a newspaper half-way around the world. Besides these issues, our increased reliance on the Internet also leads to alienation, as Healy shows.

Beyond all that, Healy wants to see whether or not ‘Marx’s view of alienation provides greater explanatory power and clarity than other theories of alienation in helping us in researching and understanding ‘the contradictory nature’ (3) of work under capitalism. Years ago, Sayers (2001) has discussed the link between Hegel, Marx, and alienation. Yet, long before Sayers’ work, Seeman (1959) had ‘constructed five categories of alienation: powerlessness, meaninglessness, normlessness, isolation, and self-estrangement’ (8). One of the advantages of Marx is that he makes clear that ‘labour itself becomes a commodity’ in capitalism. As a consequence, alienation is inextricably linked to capitalism (13) – there is no escape and no change of work arrangement can alter this as long as capitalism exists.

Yet, alienation does not only take place at work as capitalism reaches beyond the workplace. Healy argues that ‘alienation is everywhere. It exists at work in production, at home in consumption, and it dominates much of politics and daily life’ (21) reaching even into human intimacy (Klotz 2006). On the other side is Blauner (1964) who ‘trivialised Marx’s concept of alienation reducing it to a study of job satisfaction’ (23). This is important for management studies, business schools and Managerialism. It downgrades alienation to job satisfaction and through that, it becomes, in the minds of business school professors, a manageable category (Klikauer & Simms 2021). All this aids the hallucination of ‘the possibility of overcoming alienation within capitalism’ (25). This chimera remains a vital step in sustaining capitalism through the ideology provided by business school and management studies.

On the empirical side, software engineers believe that they do not have any control over what they do (43) and that they do not have control over what is in store for them (43). Workers also say that management uses various pretexts to reduce workers’ pay and benefits and to lower the status of IT jobs. Workers feel that they have been squeezed quite severely by management (43). Meanwhile, other workers note how external customers have gained power over their work leading to alienation. This occurs when external customers take over the running IT projects. That means, they furnish themselves with the ability to allocate work to IT professionals. In some case, they simply tell workers, ‘this is what we need’ (44). Yet, management keeps up the illusion that IT workers can pick their own work assignments. In reality however, IT workers often get pressured by management to carry out job assignments defined by others. This is a further source of alienation. The empirical section of the book contains plenty of statements like these. Yet, it has gotten worse since the global financial crisis of 2008. This has been used to intensify competition within the IT sector (45).

This is reflected in the following statement made by an IT support worker, ‘once upon a time … there was a lot more support from the company … this has been whittled away’ (46). Meanwhile, many IT workers used to have a relatively clear career path formed with a specific ‘career development manager’. In many cases, such clear career paths have been eliminated. What determines an IT worker’s career is the ability to obey business imperatives (46). Beyond that, there is always the threat of outsourcing. These battles have been turbo-charged under the managerial threat of changing the business’s location to India (48). This creates not only work stress but also aids alienation. Simultaneously, there has been pressure on IT workers to travel domestically. Many IT engineers are under contracts that force them to travel domestically. Such requirements to travel have obvious ramifications. They increase stress, lead to additional work pressures, and force IT workers to work far away from home. All of this alienates IT workers. In many cases, it boils down to simple management logic; management does not want IT engineers who do not want to travel.

Beyond that, the much acclaimed “customer-is-king’ ideology contributes strongly to alienation. An IT worker revealed how the “customer-is-king” ideology works when saying, ‘the primary contractor said I don’t want this gentleman on site anymore. Within a week I was gone … that adds to the stress in that you can’t even sneeze the wrong way for fear of being let go from a particular piece of work’ (49). Contributing further to our understanding of alienation, an IT worker explained, ‘I have at least three managers … we are micro-managed [and a systems designers said that there is] a direct management mechanism to control staff’ (51). In other words, in the world of IT work, alienation also comes with a sharp increase of control by management. Inevitably and just as IT support workers say, ‘it creates stress because people are forced to come into work and there is nothing to do. It is humiliating and degrading; their skills are deteriorating. It is horrible’ (52). Much of this indicates IT workers have been asphyxiated inside an overpowering process of alienation – applied throughout the IT industry.

Virtually, the same applies to academics who now work under the anti-democratic despotism of Managerialism. As a consequence, ‘54% of UK academic staff are employed on insecure contracts [as] the rise of Managerialism [results in] a diminishing influence of the academic choice’ (61). In many cases, it is Managerialism that sets out what has to be achieved. It renders academics incapable to function as academics. This phenomenon is known as “Academentia” (Klikauer & Young 2021). Academentia confines academics to ‘quantification, standardization, and surveillance’ (62) while simultaneously destroying academia as they become incapable of functioning in their traditional surrounding.

One of the old and now managerialist-enforced issues remains: “publish-or-perish”. Yet, academia’s free labour – creating an idea and a plan to realise it, getting funding, getting ethics approval, conducting research, writing scholarly articles, etc. – feeds a gigantic profit-making machine (Monbiot 2011). Not surprisingly,

For-profit academic publishing is a $25bn industry with profit margins reaching between 35–40% … consequently, five major for-profit publishers (Elsevier, Springer, Wiley Blackwell, Taylor & Francis and Sage) own over half of the world’s academic material … with an estimated three publishers, Elsevier, Springer and Wiley Blackwell, controlling 42% of all published articles (64).

It is just as the former Harvard Business Review editor Magretta (2002: 80–81) once said, ‘business executives are society’s leading champions of free markets and competition, words that, for them, evoke a worldview and value system that rewards good ideas and hard work, and that fosters innovation and meritocracy. Truth be told, the competition every manager longs for is a lot closer to Microsoft’s end of the spectrum than it is to the dairy farmers. All the talks about the virtues of competition notwithstanding, the aim of business strategy is to move an enterprise away from perfect competition and in the direction of monopoly’. Magretta’s accounts testified to what Karl Marx once said, capital strives to create monopolies – even in academia.

Typically for Managerialism, it ‘reduces human action [to] performance and competency … [and it does so] to obliterate the humanness in human action’ (67) – just as Klikauer’s “Managerialism” (2013) predicted. Worse, university Managerialism forces academics into ‘the obligation to fill in time-consuming grant applications [creating an even] heavier workload [leading to] frustration and stress [as Managerialism becomes] omnipresent’ (69). This is a gigantic waste of time and money. It is engineered through the games played by managerialist, funding managers, and university apparatchiks. Their grant announcement of, let’s say, $50,000 in research funding, leads many academics to apply – let’s say, fifteen academics apply for the grant. In the end, one gets $50,000 and fourteen academics do not. This creates heavier workloads, stress, and frustration.

But wait, there is more. University apparatchiks can announce the winner in an imposing university setting and announce the winner on university websites. They can show off that the university hands out money while encouraging aspiring academics to join the game in to the next round of managerialist “fun-&-games” with grant applications. In the end, one academic, Managerialism, and university apparatchiks win while research and plenty of academics are the silent, unrecognised, and unseen losers – a near perfect system. And best of all, the system goes on.

Healy closes his marvellous book by saying that ‘alienation is a constant feature and is experienced as a norm rather than as an aberration’ (124). Indeed, it is just as Hegel and Marx had predicted (Sayers 2011). One might indeed argue that there is no capitalism without alienation and there is no alienation without capitalism, well hopefully. In the end, Healy is correct when saying, ‘Marx’s theory of alienation offers much greater explanatory power than any other current theoretical approach’ (131). Once again, my old neighbour from Trier was right and so will be everyone studying alienation when sticking to Hegel and Marx, and now also to Healy’s most exquisite book.