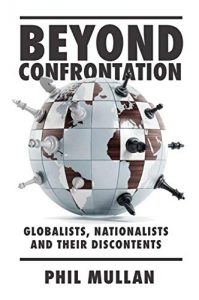 Phil Mullan
Beyond Confrontation: Globalists, Nationalists and their Discontents

Fouad Mami is a literature scholar from the department of English, University of Adrar (Algeria). …

The central argument in Phil Mullan’s Beyond Confrontation specifies that protectionists (nationalists) and globalists (free traders) are equally leading the world to wall, and unless these elites find a third way to mediate and transcend their diametrically-opposed standpoints, the world may very well be facing a global carnage. The antidote according to Mullan lies in invigorating democratic rules through a genuine internationalist framework, which alone can resolve the present stalemate and contribute towards a positive change that could satisfy both globalists and nationalists.

The first message of the book is that humanity has been living in a false omnipresent in the sense that institutions charged with informing populations, namely news agencies, do not even begin to approximate the quagmire besetting geostrategic relations. The post-1945 world has eroded and the task of founding a less contentious order is more than vital. According to Mullan, both nationalists and globalists need to show more maturity when standing behind their respective choices and this maturity can only materialize by shedding their mutual distrust. Examining the root behind this distrust, Mullan finds a long string of clichés and misnomers. Contrary to several clichéd portrayals, globalism has never been about free trade, and the latter rarely translates a commitment to the lifting of all or most trade barriers. Similarly, globalism is not the cause behind the world’s present stalemate, uncertainty or the fact that the world has been spinning out of control for quite some time now. Rather, globalism, as is the case with nationalism, is but one recent codification of today’s world, which has increasingly become more complex, translating intensities that are congruent with the world’s political economy. Unlike facile caricature, Mullan’s analysis emphasizes how nationalism has been rarely a clarion call for parochialism or nativism.

Besides the demystification work, Mullan charts his own ‘third way’ or internationalism which he deems capable of teasing the tension between the globalists and nationalists. In order to ensure that that internationalism has a qualitative advantage in current conjunctures, Mullan envisages internationalists with the capacity to go beyond the formal setting of rules (like globalists), no matter how well-intentioned the latter are. In addition, internationalists will need to effectively work with the state apparatus of elected governments, which internationalists cannot pretend to be a mere formality. Similarly, and in order for nationalists to meet their objectives and satisfy their voters, they need to subscribe to an internationalist framework via cooperating with cross borders actors. The book convincingly claims that the post-1945 consensus has become obsolete and that the world desperately needs a new one, not necessarily a more egalitarian one but one that is more reflective of the intensities from present capital accumulation.

The book lies in three parts: the first two contain four chapters each while the third has only three. Apart from tracing the genealogy of globalism, the first part ‘A World of Rules’ enumerates the central tenets of globalism and examines its pros and cons Globalists’ commitment to rules masks their deeply-seated distrust for mass democracy. Their supranational arbitrations are eventually canceling politics. With a vivid experience of the two world wars, these international elites blame the masses for being prone to whims that put populist governments in power. Nevertheless, rules significantly curtail the possibility for an alternative life and reduce it to a predetermined and stultifying overall structure. Probably, Mullan should have highlighted that what is contested is the governing principle behind the rules or the rules that set the rules, the procedural structure itself along with its logic. Mullan has a point when underlining that in emphasizing the procedural, ‘[t]he rules become weapons in this struggle, especially by those who want to preserve the old order.’ (76).

Part Two: ‘Myths about Trade’ lay out the main contention behind the nationalists/protectionists’ criticism of international elites. Mullan assumes that in their incapacity to meet electorates’ ever rising expectations, nationalists resort to a cheap discourse and often ineffective protectionist measures which overall confuse causes with effects. Their fixation on commerce further depreciates their capacity in the creation of added value. For nationalists, the globalists’ emphasis on human rights impinges on national sovereignty. Nationalists are right in noting that a legalist or procedural subscription to law only alienate them before electorates. The UN-sanctioned US invasion of Iraq in 2003, justified on the ground of destroying the inexistent weapons of mass destruction, often comes handy in the nationalists’ arsenal against global elites.

Part III: ‘Internationalism Starts at Home’ specifies the author’s conception for a solution which lies in: ‘enlightened internationalism’. This latter is deemed by the author as qualitatively and quantitatively different from the globalists’ response to crises within matured industrialized nations. Internationalists, for Mullan, will extend the links between nations through bottom-up democratic forums. Conflict between nations can be significantly contained via interdependence between these states, not through isolation. This zero-conflict strategy will be effective only by addressing ‘the economic atrophy at home’ (145). Thus, internationalism will be – according to the author – the matrix that can promote law and order but without the side effect of either denigrating or revoking the political. How this will be carried out in practice remains to be examined.

Methodologically, Mullan dismisses neoclassical theory of value, the one which stipulates that value emerges from exchange rather than from production. Put differently, if indeed only human labor creates value (as machines cannot be exploited and the machine’s value is always prepaid), then protectionists will have no case. But the ingenious part of Mullan’s analysis stresses that nationalists and globalists are certainly never a black-versus-white divide. Dialectically rich, Mullan’s study finds ‘[t]he coming breakdown of order is most likely to pit not mercantilist-versus-globalist but globalist-versus-globalist.” (84). The author refers to policies taken by the Obama administration that were received as nationalist where in reality they were globalist. Indeed, it was the Obama administration that took protectionist measures and which were far more outreaching than those taken by the Trump administration. However, the media instead chose to diabolize Trump and not Obama for reasons that are not entirely foreign to Mullan’s own internationalist project.

Mullan’s examination of the ills of the present modus operandi is most up-to-date. Drawing on historical parallels from the second half of the nineteenth century and the first half of the twentieth, readers will find in Beyond Confrontation an uplifting analysis from the commonsensical analysis that predominate TV stations and leading newspapers. The refining nuances of the contribution will enable readers to register, beyond any populist repercussions, that globalists cannot be necessarily cold-blooded imperialists and that nationalists are not the last bastion facing capitalists, the way nationalists often want to be applauded. Globalists’ commitment to world peace cannot be reduced to an implicit hunger for profit. If profit is their sole driver, they can profit quickly from armed conflicts. Globalists are thus driven—Mullan tells us—by the need to ensure peace: their commitment for non-tariff protectionism, nonetheless exacerbates the already murky environment. Likewise, when they fail out of sheer malaise or in consequence of mistaking of cause-and-effect to act within their power, nationalists blame globalists.

Even within the present quagmire, Mullan underlines, there exists situations where elected politicians (nationalists) have taken policies that serve globalists’ projects and parallel cases where globalists have similarly served nationalists’ causes. Hence, the need for elected politicians and appointed officials of global institutions to abandon their feud and act from an internationalist framework. Similarly, both the nationalists and globalists’ penchant on trade instead of production is deemed by Mullan as fatally misleading. Indeed, he is right in noting that trade agreements remain but ink on paper if they are not activated via the exchange of products. Trump and other protectionists resort to preferential trade agreements less to produce value and more to market excess produce. And herein Mullan himself has his own share of mistaking causes with effects. Protectionist policies do not result from dysfunctionalities in management, and should a better management be put in charge, the dysfunctions just evaporate.

Still, if China and other countries of the so-called ‘Asian miracle’ and (this includes to a lesser extent Russia too) are scoring high GDP rates, it is simply because they are all relatively backward economies. By the time these economies will become as advanced as those of West Europe or North America, they will eventually experience the effect from stagnation-in-consequence-of-saturation, or what Mullan calls ‘the specific outcome from of the over-maturity of capital’ (157). China has still several years and probably decades ahead before reaching the saturation limit. By the end of Capital, Volume III, Karl Marx explains this stagnation in terms of a mathematically-proven law, ‘the tendency of the rate of profit to fall’ which no amount of effective or efficacious management can reverse. In order to dodge the effects of the law, both China and Russia (or any industrial power for that matter) will have to keep producing for two or three underdeveloped continents, not countries! Therefore, when the author presses production in lieu of trade, he is pointing at the right direction but Mullan hesitates to press further. The crisis is the one that no management can resolve because it lies at the heart of the mode of production, that is, in the production of production/value. It is fatal because capitalism produces essentially to make profit, not to satisfy human needs.

Closely considered, Beyond Confrontation emulates Pierre-Joseph Proudhon’s Philosophie de la misère (1846). That is how Karl Marx’s Misère de la philosophie (1847) remains a relevant tool to answer Mullan as he too tends to overlook that the capitalistic mode of production is a self-negation in movement, not an oversight that can be fixed. And this brings us to what is perhaps the most annoying aspect of this book. Mullan discusses the elites’ side of the impasse. It is true that these elites are not of the same caliber or opinion. Sometimes, they can even go to war against each other. But he thinks that the subaltern do not exist, which is by no means a small oversight. Appearance – Hegel reminds us – is never essence. Some ten years ago, who could indeed think that autocrats such as Mubarek, Ghaddafi or Bouteflika will be all gone?