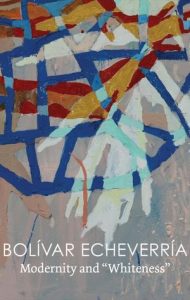 Kyle Proehl is a PhD candidate in Comparative Literature at UC Davis. He is working on a …

If it ever seems as though the activist demand to decolonize everything, as it advances through the rhetoric of academics and commerce, tends to sacrifice something of the difficulty of negotiating an identity in order to make it easier to choose sides, or purge a syllabus, or market a position, then the late Bolívar Echeverría may offer some tools for thought. Echeverría was a bit of an anachronism: a philosopher whose seminars on Capital at UNAM in Mexico City were attended by soon-to-be guerillas, including Álvaro García Linera, Raquel Gutiérrez Aguilar, and Subcomandante Marcos. Yet nowhere in his writings do you find recipes for how to behave – and it may be safe to assume that the students just mentioned were in the minority. Instead you find the essay form tracing images of nonidentity with which to face the mounting catastrophe of history.

Echeverría was also a contradiction. He was both a Latin American – with birth and youth in Ecuador, the bulk of education and scholarship in Mexico, not to mention several years of study between the two in Germany – and a philosopher who has been accused by lapsed Marxist Enrique Dussel, also a Latin American philosopher, of that sin of sins, Eurocentrism (Dussel 2014). In this first book-length translation of Echeverría’s work, a posthumous collection originally published in 2010 and now appearing in Polity’s Critical South series, the first nine out of twelve essays make little mention of Latin America or Global South or Third World. Instead we find Modernity, Enlightenment, Art, Walter Benjamin, Jean-Paul Sartre, America (as in the U.S.) and blanquitud, the latter receiving the unfortunate translation of ‘whiteness,’ with scare quotes to distinguish it from whiteness (blancura) pure and simple. This is unfortunate because, as Bruno Bosteels has pointed out (Bosteels 2019), the original word carries an implicit echo of négritude, the philosophy or poetics pursued and interrogated by Aimé Césaire and Léopold Sédar Senghor among others, a French neologism coined as a provocative reversal of insult that is pretty much never translated as ‘blackness.’ Echeverría’s blanquitud denotes an assemblage of compulsory behaviors recognizable as the character of productivity. As he explains in ‘Images of Whiteness,’ such behaviors’ casual emergence within a certain time and place linked them to a particular appearance, attaching a compulsory productivity to the racial image of blancura. One does not have look white to be ‘white,’ of course, a familiar enough diagnosis but given a reach here going so far beyond that of the ‘Uncle Tom’ as to expose the illusory appearance that is U.S. ‘diversity.’ The ethics of self-sacrifice demanded by the ‘whiteness’ of ‘American’ modernity, ‘a positivist, “realist,” acquiescent, and docile response to the “spirit of capitalism”’ (57) in its continual reconquest of everyday life, reveal a genocidal and suicidal internationalism. A better example than the globally savage neglect in response to the pandemic could not possibly exist, or at least not yet. Echeverría points to Nazi Germany’s absolute union of ‘whiteness’ and whiteness as the exemplary regression and lurking threat. He does not mention négritude, as is somewhat typical in his practice of allusion, but its obfuscation in translation severs the potential conceptual link to blanquitud with the latter’s implication of the category of surplus, or the split between value and the ‘excess’ value-producing population, capital’s production of the unproductive. Echeverría’s engagement with the critique of political economy is rigorous but sometimes subtle. He worked almost entirely in the essay form, and his essays often suggest a casual correspondence, an approach to representation that is suspicious of thought’s capacity to represent the social whole. We are encouraged to mine the gaps, making translation, a practice Echeverría understood as always potentially radical, a minefield.

The specter of Walter Benjamin, whose work Echeverría translated and often wrote about, haunts the collection beyond the one piece addressing him directly. In ‘Art and Utopia,’ Echeverría’s philosophy of history takes the shape of a history of philosophy. It is a rereading of Benjamin’s famous ‘Work of Art’ essay that trains its sights on its extemporaneous character, on how the author ‘proletarianized’ himself in its writing, and on how the argument anticipated its vindication in a revolution whose failure to arrive cleared the way for barbarism. This, Echeverría notes, was the occasion for Max Horkheimer and Theodor Adorno’s critical response to Benjamin in their essay on the culture industry in Dialectic of Enlightenment, which Echeverría also addresses in ‘Meanings of Enlightenment,’ where he attempts to draw out the narrative beneath the titular concept’s ambiguities and contradictions. In doing so Echeverría works back and forth between the language of critical theory’s ‘fight against a “depravity” in discourse’ (28) and that of Jean-Paul Sartre’s contemporaneous ontological phenomenology in Being and Nothingness. Echeverría’s ‘gratuitous, contingent act’ (32) of translation, with its veneer of exchange, produces odd mediations that may cause discomfort for partisans of either theory, as in the following on ‘trans-naturalization’: ‘As transcendence of the “natural” Other, and particularly as “trans-animalization” of the “proto-human animal,” this humanization of being in general or of the Other is necessarily a “determined negation”; it is a separation from the animal but it is also, in equal measure, an animalization of that which is separated from it: an animalization of subjectness,’ he writes. ‘It is a “re-formation” of the natural, but it is also a “naturalization” of form’ (30). This ‘trans-naturalization’ may be alternately termed Enlightenment or Freedom. At stake for Echeverría is the human being’s capacity to endanger its own identity in order to preserve its capacity to be human, a capacity continually suppressed by ‘actually existing capitalist modernity.’

Modernity, for Echeverría, following Lewis Mumford, Fernand Braudel, and others, is a set of behaviors in social life arising from a shift in the productivity of human labor aimed at the introduction of new means of production. Beginning around the eleventh century, Echeverría writes, this shift made possible a new relationship between the human and the natural, one based not on absolute scarcity of resources but on relative scarcity, not on enmity and conflict but on cooperation and mutual benefit. The appropriation of the new means by a social form based on the production of surplus value, capitalism’s successful imposition of a condition of false scarcity, is a repression of the potentiality of modernity. In ‘actually existing capitalist modernity,’ the ‘natural form’ of social reproduction, the process of production and consumption of use-values, is constantly being dominated or subsumed by the ‘value form,’ the limitless process of the valorization of commodity value. This contradictory unity of production and consumption is the commodity form in history, or history in commodity form. Echeverría’s turn toward use-value reorients the focus on value’s necessary compromises in its continuing, incomplete domination. As Echeverría understands it, there are four main modes of adaptation to subsumption, named to underscore a homology between art and practical life: realist, romantic, classicist, and baroque.

Echeverría’s entire project, especially after the more direct critique of political economy in El discurso crítico de Marx (1984), can be seen as an attempt to theorize this ‘natural’ form, a structuring principle of social life parallel and contradictory to that of the value form. Subsumption is the conceptual scythe wielded throughout. Here it does not simply refer to changes in the labor process, but to the perpetual reconquest of other possible forms of wealth and life. Things look different from the position of use-value. According to Echeverría, ‘Marx’s critical discourse’ is ‘parasitic and demolishing,’ evanescent and transitory; and subsumption cuts across a pair of transitions: ‘the transition from a theoretical analysis to a historical analysis’ (20) and ‘the transition “from pre-history to history”’ (117). The recognition that the ‘natural form’ precedes and determines the value form enables Echeverría to drive a wedge between the potential and actual in history that might open a path to a human future. In accusing Echeverría of Eurocentrism, Dussel also questioned his absence from Third World dependency debates (Dussel 2014), but what emerges in Echeverria’s acute thesis on ‘Technological Rent’ is that subsumption is prior to any question of development or under-development, both of which are rather forms of appearance, as seen from the viewpoint of political economy. The dead seize the living both in practice and in theory.

Against ‘American’ modernity’s ‘realist’ accommodation to capital stands the image of Latin America’s ‘baroque’ modernity. ‘Meditations on the Baroque’ describes Latin American history not as one of simple colonial domination but as ‘a civilizational feat of the highest order’ (134), whereby the indigenous survivors of colonization, recognizing the destruction of their civilizations and the decay of the Conquest, rescued social life in the Americas from barbarism by reconstructing the new civilization from within, undertaking a ‘baroque’ performance of Europeanness in which the latter became something else entirely. This performative reconstruction, somehow both spontaneous and civilizational, ‘re-actualized the greatest resource in the history of human civilization,’ mestizaje – which Echeverría calls ‘the universal and concrete mode of human existence’. ‘It gathers and multiplies every possible identity,’ he writes of mestizaje, breaking its possession by the Latin American nation, ‘it does not set as a condition of its own culture a closure to other foreign commitments, a rejection – a hostile or simply blind denial – of other different identities’ (137).

In the final essay, ‘Mexican Modernity and Anti-Modernity,’ Echeverría makes use of the four strategies or ethe of adaptation to capitalist modernity in an analysis that cuts through the stagnant categories of a political spectrum whose analytic power, from right to left, has withered along with what Gyorgy Lukacs described as ‘the era of the actuality of the revolution’ in which the spectrum was born, illuminating the nation-state’s conflicts as if to allow them once more to appear anew. It seems important to note that Echeverria does not place indigenous peoples under the category of the baroque. The ethos is not an exclusive property or tradition. Amidst the decay of ‘American’ modernity, as conditions around the globe force us toward retrenchment, toward fearful regression to the consoling familiar, some may recognize the challenges offered here as those that must be made our own.