Marx & Philosophy Review of BooksReviews‘No Bosses: A New Economy for a Better World’ by Michael Albert reviewed by Thomas Klikauer 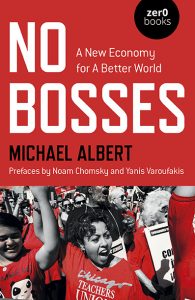 Michael Albert
No Bosses: A New Economy for a Better World

Recently, American economist Michael Albert published Occupy Theory (2013) and Practical Utopia (2017). Albert’s latest book is titled “No Bosses”. Furnished with a preface by Noam Chomsky and by Yanis Varoufakis, the book has ten parts starting with “Values for a better world”. This is followed by “Who owns what?”, “Who decides what?”, “Who does what?”, “Who earns what?”, “Who likes markets and central planning?”, and “Who allocates what?”. The final three chapters are about “The participatory economy”, “Winning a new economy”, and “Origins, prospect, and history of participatory economics”. Yet, Albert’s book can be seen in three ways.

In Envisioning Real Utopias (2010, p. 57), American analytical Marxist sociologist Erik Olin Wright suggests that much of our writings on the political economy fall into three categories. The vast majority of books not only analyse the problems and pathologies of contemporary capitalism – they challenge capitalism. The second group of books deals with, as Wright says, ‘What is the alternative to capitalism?’; and, the third group of books is about ‘How do we get from here to there?’.

The book starts with the ideology that neoliberalism appears as the only way. This is what the TINA (There Is No Alternative) doctrine (p. 4) promises. Ever since Thatcher introduced the term, TINA has mutated into one of the leading ideologies of neoliberalism, which Varoufakis argues, ‘have spread everywhere like a boisterous virus’ (p. 6).

Yet, neoliberal capitalism also means that people are forced to ‘live under the tyranny of market forces weaponised by cunning bosses’ (p. 7) those I have called “corporate apparatchiks”. Yet, this also includes line managers, supervisors, overseers, middle-management and CEOs. There are quite literally layers of bosses in a system that is entirely based on hierarchies. In management and business studies, the tyranny of cunning bosses and managerial hierarchies are camouflaged under the ideological motto of “flattening hierarchies” or, as the flagship publication of managerialism, the Harvard Business Review, says, Finding Innovation in the Flattened Organization (2011) and How to Successfully Scale a Flat Organization (2021).

To an overwhelming degree, No Bosses is not about ‘how [to] run a collectively operated firm or company [where] a workers’ assembly elect decision-makers’ (p. 9). Such elected decision-makers would only constitute another form of bosses. They would easily slip into a position of seeing and placing themselves as being above workers. This is not what Albert suggests.

Instead, the book goes to a considerable length in discussing the prevention of the emergence of a new class of self-appointed managers even when democratically elected. After all, democracy is not much more than moving from a club to a pen. In historical terms, democracy came from a time when men were hitting each other on the head until one remained standing – he was the leader. Today, the club has been replaced by a pen, the system is the same. Qualitatively, democracy has made no progress. Perhaps these bygone systems do indeed belong into ‘the Museum of Human Miseries’ (p. 12).

Albert is right when saying that much of what has been written about capitalism is about the misery of capitalism. He correctly says, ‘the resulting works are typically 90%, 95%, or even 99% about what we endure and barely at all about what we want’ (p. 17). On the question of what we want, Albert says ‘self-management becomes our first guiding value’ (p. 24). The term “management” is rather unfortunate, for four reasons: firstly, management originates form the French “manege” and the Italian “maneggiare” meaning the handling or training of a horse, horsemanship, and riding. In this context it also means to break in and domesticate a horse. In modern workplaces, it means to handle, train, break in, and domesticate workers. In terms of the history of factory work, E. P. Thompson’s The Making of the English Working Class (1963) has shown how this was done.

Secondly and not only because of the etymology of the word, management always implies top-down management. It implies managers and workers, underlings, and subordinates. It implies those who control and those who are controlled. It also implies hierarchy, authoritarianism, macho-management, despotism, and anti-democracy.

Fourthly and finally, using the term “management” even as “self-management” (as Albert does) buys into the ideology and propaganda of corporate capitalism and managerialism. Instead of using a term that cements the inhuman ideology of corporate capitalism, Albert would have been better off using a different term such as “organising”, as in “self-organising”, as suggested most recently, for example, by Marin Parker (2020).

In his chapter on “Who decides what?”, Albert returns to a time-honoured idea – ‘the workers council’ (p. 37). He argues strongly against the notion of, ‘let’s just let one person decide. It’s much less messy’ (p. 39). Set against this, Albert says ‘it appears less messy only if we don’t value the input that is excluded and don’t count the accruing damage’ (p. 39). Apart from the human and environmental damage that management causes globally, hierarchical companies and corporations are modelled on the army.

Set against militaristic management and deeply anti-democratic principles, Albert’s argument is that, ‘the workers council would … become the main repository of decision-making power within each workplace. Not an owner, not a boss. A collective of self-management’ (p. 40) – even though self-organisation would still be the better term. What this seeks is to prevent the re-emergence of a ‘professional managerial class’ (p. 47). Today, this class even sits separately from the rest of us – in the business class. On workers’ councils, Albert predicts, ‘five out of five employees … would be able to participate successfully in workplace decision-making’ (p. 54).

Albert also notes that, ‘the entire process would be collectively self-managed. There would be no elite eager or even able to bend everyone else to their will’ (p. 62). Nietzsche’s Will to Power (1880), that is deeply engraved into the ideology of Managerialism, would be replaced by what German contemporary philosopher Axel Honneth calls “recognition” (1995). It means that workers and managers will no longer recognise each other hierarchically and in a top-down relationship. Instead, producers and organisers would establish mutual and equal recognition. Mutual recognition would guide not only workers’ councils but also what Albert calls ‘participatory economy’ (p. 63).

This would, inevitably, also lead to a very different income structure – a structure in which the following would no longer be possible: ‘if Samantha, working for Jeff Bezos at a mid-level Amazon job, earns $50,000 a year, it will take her 1,000 years to earn what Bezos earns in one day’ (p. 70). It might also end the hallucinations that ‘we have to pay doctors vastly more than dishwashers because otherwise doctors would opt to wash dishes’ (p. 85).

In an economy, all of that also needs ‘participatory planning’ (p. 92) not Soviet Gosplan-like planning. Yet, top-down planning is part of every company and corporation. Management studies hide this behind the façade of strategic management. Strategic management is nothing but planning. Strategic management strongly believes in its very own dictum of ‘Planning can do no wrong!’. The ideology of a free market is a smokescreen for the fact that none of the Fortune 500 corporations makes a product, walks down to a romantic village market, and sees if it sells and for what price. These are fairy-tales from neoliberal economics textbooks. Incidentally, economics is great because it provides employment for economists. Beyond all that, the larger the corporation, the more planning that has to inevitably take place. Bezos’ Amazon is the ultimate planning machine. It has perfected planning using two things: big data and algorithms.

Despite, or better, because of the free market ideology, our so-called neoliberal free market economies and adjacent corporations show a very high degree of planning, at least when it comes to how actual corporations operate in the real world. A participatory planning economy would introduce the element of people and democracy into planning. In every large corporation, planning is happening on a daily basis. This sort of planning would then happen inside a ‘participatory economy’ (p. 185). With this, such a participatory economy would remove all class hierarchies from society. Albert closes his book by saying that the ‘participatory economic vision has just five core components’ (p. 209): commonly organised productive assets, ‘workers and consumer councils, balanced job complexes, equitable remuneration, and participatory planning’ (p. 209).

Overall, Albert’s book provides a sensible, well thought-out, richly illuminating, highly readable, and exquisitely structured argument for what he calls participatory economics. The book clearly and convincingly lays out what the values of a better world are. The arguments made in the last three chapters – often constructed as counterarguments against mainstream economists – are compelling, easy to comprehend, and plausible. Unlike the 99% of all books bemoaning the pathologies of neoliberal capitalism, Albert has succeeded in delivering a book that shows, in great detail and very successfully, what the alternative to capitalism is. Albert’s book is one of those very rare books that truly fulfill what E. O. Wright requested and Marx once outlined in his Thesis Eleven.