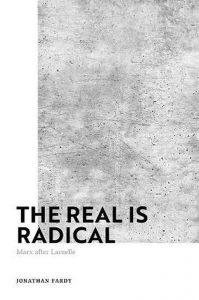 Jonathan Fardy
The Real is Radical: Marx After Laruelle

Jeremy R. Smith is a doctoral candidate at the Centre for the Study of Theory and Criticism at …

With The Real is Radical: Marx After Laruelle, Jonathan Fardy now has written three books on the work of French philosopher François Laruelle and the practice of non-philosophy and non-standard philosophy. Laruelle’s over fifty-year spanning corpus concerns itself with inventing a non-philosophical pragmatics that makes use of philosophical concepts, theses, and statements to transform them into tools that are rendered adequate for human use beyond philosophy’s conservative and authoritative governance over itself, other regions of thought, and reality. Fardy’s other forays into non-philosophy (Laruelle and Non-Photography and Laruelle and Art: The Aesthetics of Non-Philosophy) show promise towards the expanding scholarship of non-philosophy into domains such as aesthetics and art history.

The problematic of The Real is Radical is highlighted by the subtitle: how does one envision Marx and Marxism after Laruelle and his non-Marxist practice of Marxism in a conjuncture that Fardy calls, following Laruelle, supercapitalism? It is with the concept of supercapitalism that Fardy finds philosophy and capitalism unified in terms of the principles of exchange and equivalency. According to Fardy, capitalism ‘axiomatically assumes that things can always be exchanged for their equivalent in value’ and philosophy ‘axiomatically assumes that the Real can be exchanged for its equivalence in concepts’ as well (6-7). Fardy suggests that through his constellational method, inspired by the work of Theodor Adorno and Walter Benjamin, one can build relations between thinkers and concepts to be aligned in order to combat against both the exchange and equivalency that underwrite philosophy and capitalism as logical imperatives. The reader is presented an introduction, five chapters, and a summarizing conclusion with a coda reflecting on the role of theory in the times of COVID-19.

The chapters are titled ‘Stranger’ ‘Struggle,’ ‘Impossibilization,’ ‘Fiction,’ and ‘Metaphysics.’ Each chapter acts as a constellation that ‘encircles a set of problems and themes in Laruelle’s non-Marxist work’ (11). Fardy attempts to weave connections with various thinkers through these themes to be able to think Marxism ‘otherwise than philosophically in the standard sense’ (195). ‘Stranger’ takes us on a path regarding the young Marx, Louis Althusser, Georges Labica, and Michel Henry on the questions regarding estrangement and Laruelle’s notion of the Stranger-subject, to ‘establish a “stranger Marxism” radically estranged from the supercapitalist ideologies that haunt philosophical Marxism’ (15). ‘Struggle’ is situated in the context between the primacy of theory and the primacy of practice represented by Althusser and Mario Tronti respectively that may revitalize the question of the subject, now the ‘non-proletarian’ to use Laruelle’s term, as a subject-in-struggle who will struggle against philosophy and capitalism. By staging Althusser and Tronti in relation to Laruelle, Fardy finds this ‘useful for illuminating the stakes of Laruelle’s work in light of the dynamic debate between the primacy of theory and the primacy of practice’ (50). ‘Impossibilization’ frames a reading of Laruelle’s work as quasi-structuralist, seeing that the Philosophical Decision is a structuralist concept, and strives to find some affinity with Adorno’s negative dialectics and Laruelle’s non-philosophy to impossibilize supercapitalism. Fardy states that this comparative reading strives to show the affinity between ‘non-standard Marxism’s insistence on the non-commutability of concept and Real with that of Adorno’s project of negative dialectics’ (95). ‘Fiction’ deals with a reading of Laruelle’s philo-fiction and Jean Baudrillard’s theory-fiction to refashion Marxist theory in the face of the principles of exchange and equivalence. With philo-fiction, which is the experimental nature of philosophy stripped of and weakened of its illusory power of philosophical sufficiency, Fardy seeks to present a non-dialectical theory through philo-fiction that ‘amounts to a way of thinking that repudiates the logic of exchange and equivalence in order to think against capital in non-capitalist terms’ (131). Lastly, ‘Metaphysics’ deals with the so-called ‘Kolozovan variant’ of non-philosophy, demonstrating how the work of Katerina Kolozova presents socialist metaphysics as ‘structurally determined by instances of the real of physical life’ (191) grounded for a non-Marxist critique of capitalism, patriarchy, and philosophy.

One may expect to find a critical reading of Laruelle’s own non-Marxist writings such as Introduction to Non-Marxism when Fardy closes his introductory chapter with the following hope ‘that this book enables readers to engage Laruelle’s work (perhaps for the first time) and to grasp the importance of situating and contextualizing non-Marxism without reducing it to standard philosophy’ (14). The Real is Radical rather highlights the political stakes of non-philosophy and Laruelle’s work, all by being commensurable under the heading of non-Marxism.  In a book that maintains to center on Laruelle’s work, he largely looms sometimes as foil and sometimes as assistance in chapters coupled with and compared to other thinkers. The Real is Radical is not so much ‘Marx after Laruelle’ as it is in reality rather ‘Marx after everyone else and Laruelle.’

This book may not be suited for those who are unfamiliar with Laruelle. They may find difficulty with terms and may ask what standard philosophy consists of. They may also question how such ‘forms’ as the cogito, the noumenon, the absolute, différance, etc. constitute variants of the philosophical decision. Lastly, they may wonder what the Real is in comparison to Being or the Other and Laruelle’s notion of the One distinct from Greek and Judaic philosophies, when these can be considered the Real in other philosophies or practices, i.e., psychoanalysis. Further, the conceptual framework of terms is somewhat inconsistent with Laruelle’s own oeuvre. For example, whereas Laruelle speaks of occasional materials throughout his work, Fardy continuously uses ‘raw materials.’ The difference between the two is made in Laruelle’s writings (Laruelle 2018: 189). Another factor is the attribution of the conceptual statement ‘syntax of the Real’ to Laruelle, when this phrase appears nowhere except in the work of Katerina Kolozova in comparison to the syntax of a thought that thinks according to the real (Laruelle 2013b: xxiii). While this is a book ‘centrally concerned with explicating and developing François Laruelle’s “non-standard” approach to Marx and Marxism or what he calls “non-Marxism”’(1), it becomes difficult to perceive what distinguishes non-philosophy overall from non-Marxism.

By contrast, the familiar reader may be able to discern between what is said in terms of non-Marxism and other parts of Laruelle’s body of work. Different conjunctures, invariants, and concepts are present in separate books. However, it is a hassle to wade through the citational apparatus while reading The Real is Radical to determine whether one thing is specific to Introduction to Non-Marxism, or to Principles of Non-Philosophy, Struggle and Utopia at the End Times of Philosophy, General Theory of Victims, and so on whilst being concordant with non-Marxism. One consequence of this is the elision of non-philosophical ethics from the latter book towards the a priori and generic defense of victims against philosophical and worldly violence. Fardy remarks that these ethics are meant to prevent the victim being ‘accorded a profit/loss status’ and ‘is judged in terms of how it profits or fails to profit a philosophical position or posture’ (87). Fardy strives to demonstrate that this intersects with non-Marxism. However, Laruelle’s writings on ethics concern themselves with how an intellectual is determined by the victim’s suffering without speaking for them and striving to invent an ethics that is determined by their suffering to defend against the harassing violences of the world, capitalism, colonialism, imperialism, theodicies, and dominant Western practices of philosophy at large.

Largely because most works remain untranslated, Fardy’s argument could have been bolstered by drawing upon works where Laruelle asserts that philosophy is capital within thought and the capital-form of our general relations to the World and that a science of philosophy (non-philosophy) can suspend the mastery of its claims upon these relations (Laruelle 1991: 82). Fardy’s book may have also been supported with clarifying how Laruelle observes Greco-unitary philosophy as having become the dominant or standard form of philosophizing (Laruelle 2018: 4). Indeed, Greco-unitary philosophy has sought to make ordinary people the ideal subject to produce and reproduce the conditions of philosophical exercise through what Laruelle calls the matrix of anthropo-logical difference, that is, the mediated mixture of people and a universal or logos as that which forgets the real essence of people by positing ‘quasi-transcendental androids’ instead. (Laruelle 2018: 5-6). If Fardy sought to solely focus on the political components of Laruelle’s work irreducible to Marxism, then his argument may have also benefitted from works from Philosophy I where a Nietzschean political materialism is developed (Laruelle 1977: 31) or even ‘non-Rousseauism’ of Philosophy III (Laruelle 1995: 57). If the argument stated that capitalism and philosophy meet between philosophy as the capital-form within thought and anthropo-logical difference as a world-scale and violent phenomenon through capitalism, then it requires more than exchange and equivalency as underwritten principles, but a market, a division of labor, so-called previous accumulation, production, circulation, expansion – everything that defines capital as what emerges with blood and dirt dripping from head to toe and from every pore.

The Real is Radical may not be recommended to those who may desire a primer into Laruelle and his connection to Marx and Marxism through non-Marxism. Nevertheless, it is a welcome addition to growing scholarship into non-philosophy. It is a book with drawbacks consisting in confounding non-Marxism with the entirety of Laruelle’s translated writings and sticking to comparative approaches without teasing out what happens with Marx and Marxism ‘after Laruelle.’ Despite all that, one’s use of these ‘raw materials’ does not mean that they are freed from philosophical sufficiency and put into ordinary people’s hands nolens volens. As Laruelle declares (Laruelle 2013a: 230), invention is the only weapon of the poor stripped of everything and the philosophical All, and invention is necessary to bring about the emancipation of the proletariat by the proletariat’s own means.