Marx & Philosophy Review of BooksReviews‘Marx’s Experiments and Microscopes: Modes of Production, Religion, and the Method of Successive Abstractions’ by Paul Paolucci reviewed by Till Hahn 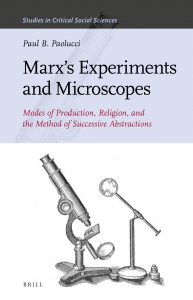 Paul Paolucci
Marx’s Experiments and Microscopes: Modes of Production, Religion, and the Method of Successive Abstractions

Reviewed by Till Hahn

Till Hahn is writing his PhD on Marx’s concept of form at Leuphana Universität Lüneburg, …

Paolucci’s book tackles the question of the ‘scientific character’ of Marx’s writings. It does so by referring to an old critique, mainly brought up by thinkers of positivist or analytical origin (especially the Popper School): that Marx’s dialectical method lacks scientific character, because his concepts are in constant change. Against this accusation of conceptual incoherence, Paolucci tries to revindicate Marx’s methods from a positivist point of view. This is what he calls ‘Marx’s microscopes’ and ‘Marx’s taxonomic method’: it is his declared goal to show ‘both that and how Marx bridged dialectics and conventional science’ as well as ‘how this approach translated into his use of the experimental model, sociological microscopes, and even taxonomic methods’ (2).  To reach this goal he introduces what he calls the ‘method of successive abstractions’: he argues that the key to understand the changes in Marx’s concept we need to crosshatch the ‘philosophical’ nexus of abstract and concrete with the ‘scientific’ nexus of general and specific. Thus, we have four positions: the general abstract, the specific abstract, the general concrete and the specific concrete (5). Paolucci’s book puts this method to work in the analysis of different modes of production and the critique of religion (10):

It is my goal in this book to reveal a piece of the Marxian methodological puzzle not yet placed on the board. I believe this piece has been hiding in plain sight and, once understood, it will become more apparent what Marx’s mature political economy is doing with its concepts and data.

It should have become clear by now that this book caters to a certain discourse of analytical and positivist descent that remains viral, especially in the Anglo-Saxon academic realm. Paolucci leaves no doubt of that, when he quotes a ‘dismissive analytical philosopher’: ‘What scientific method? Capital does not seem to follow any method I am familiar with. Dialectics? That is philosophy, not science. As a matter of fact, Marx follows no method at all as far as I can tell, especially with his terribly unsystematic writing’ (1). Paolucci’s situatedness in this sort of discourse becomes clearer, when one takes into account that he considers himself deeply indebted to the works of Bertell Ollman (ix), who – especially in the North-American context – is not without his merits, but sure enough, not without his perils either. It is thus worth noting that the ‘method of successive abstractions’ that forms the core of Paolucci’s book is of his own invention (19) and should be seen rather as a product of this very particular constellation in the (academic) philosophical discourse, than of Marxian origin.

In this particular setting (i.e. the positivist/analytical setting of the ‘North-American’ social science) the book can be considered rather meritable, as it tries to reintroduce concepts of dialectics, modes of production and especially class and class struggle into the field (cf. 272). From a strictly Marxist point of view, though, the method of ‘successive abstractions’ has to be criticized: For one, it seems to be born out of the dichotomy of the scientific and dialectical methods, as advocated by liberal and positivist thinkers of the early twentieth century with a clear anti-Marxist trajectory (i.e. Popper) (2, 8).

It is precisely this claim of revindicating the Marxian ‘science’ in the eyes of positivism, that lets Paolucci’s book fall short of the Marxist understanding of science. It does so for three interrelated reasons: First, its catering to this type of discourse lets it fall prey to an ahistorical idea of ‘scientific character’, that is unrelated to the social totality in which it is produced, and according to which history itself is just ‘the free movement in empirical matter’ (102). In his understanding history itself is just an arbitrary accumulation of facts, laid out in the past, waiting to be ploughed with the ‘method of successive abstractions’, may these facts be of economic, religious, or other nature. How (or even if) they are related to each other, how they bring about the social formation we live in today, and why understanding them is crucial for a materialist critique of capitalism, we do not learn. This ahistorical approach to the subject matter gets painfully clear in Chapter Six, where – to back up his critique of Religion – the author presents us with a thought-experiment: what if, instead of having been born in the Roman province of Judaea around 0 AD, Jesus would have been born in Peru the 1990s, and would have been called Larry, son to ‘Mongo, the one and only ruling Being’ (220). The result Paolucci wants to draw from this thought-experiment is: ‘However, these assertions appear so fanciful that it is hard to imagine anyone believing them today if introduced to that belief system as reproduced above.’ (222)

This thought-experiment shows that Paolucci’s thought is deeply ahistorical, for it is clearly not the mere fact of two thousand years having passed since the arrival of the Nazarene, that make people believe in Christianity: rather Paolucci ignores the material history of these two thousand years, the fall and decline of the Roman Empire, the feudalist systems of the Middle-Ages during which the Catholic clergy was the most influential intellectual power, the role it played during the Conquista of the Americas (which seems noteworthy, given that Mongo is supposed to appear in Peru), the Reformation and the armed conflicts it brought with it and finally the rise of the Bourgeoisie, largely influenced by Protestant ideas of Puritanism and the work ethic; in short the material and ideological role (Christian) religion played in bringing about capitalism as we know it today. This is, in a nutshell, the problem of the analytic/positivist approach (and, I think, why analytical philosophers rely so heavily on the ‘method’ of thought-experiments in general): it treats material circumstances (like the religious belief in the miraculous coming of Christ) as isolated facts, that can be reintegrated into different constructs at will, without paying attention to the historical conditions that brought them about.

This brings me to my second point of critique. The concept of abstraction that is at work in the ‘method of successive abstractions’ is a pre-Marxist one. It stays thoroughly within the realm of pure thought; the idea of ‘real abstraction’, an abstraction that takes place in social practice, that is at the core of Marxist thought, is not touched. That raises the question of the ‘position of thought towards objectivity’ that is at play in this method. While Paolucci claims for himself that his method of ‘successive abstractions’ has ‘bridged dialectics and conventional science’ (2), it runs the risk of losing both. While it is clear that he uses the term ‘scientific’ or ‘conventional science’ as synonymous with the empiristic gathering of data, the question of his understanding of dialectics is a more complicated one: although he employs much of the Marxian conceptual apparatus to justify his analysis of the categories and their production, in the end they tend towards a more Aristotelian model of the division and sub-division of categories. In his approach a broader catch-all general concept divides itself into ever more concrete sub-categories, while there seems to be no necessary relationship between these categories and the things they address (8). On the contrary: in his rather narrow understanding of thought as a mere epiphenomenon of language (5), his only question seems to be weather we have the right words for the empirical facts we randomly found.

Consequently, this makes the implementation of this method in the analysis of different modes of production and the critique of religion a rather exhausting exercise in the division and subdivision of categories. Why the ‘general abstract’ divides itself in ever more ‘specific abstracts’, ‘general concretes’, and ‘specific concretes’ and what the use is for the critique of these modes of production is seldom made clear. Also, the endless tables of different concepts and categories placed in this quadruple scheme make reading the book a rather tiring experience (cf. pp. 23 – 25, 90 – 93, 146 – 148, 156).

This finally shows the opposition between ‘science’ and ‘dialectics’ that Paolucci imposes, as a flawed one: it is rather the dialectical understanding of the sciences themselves (as embedded in a certain material, historical, economic, etc. social formation), that provides critical insight into the scientific mode of production and the specific ideologies it works under (the positivist school being one of the most notorious). Bearing this in mind it is especially noteworthy that none of the Marxist thinkers who throughout the twentieth century engaged in a deep criticism of the bourgeois ideology of the ‘scientific character’ are mentioned. No mention of Althusser and his critique of science as mode of production, no mention of Horkheimer and his critique of instrumentalist reason – not even Engels’s ‘Development of socialism from utopia to science’ (or his ‘Anti-Dühring’) are referenced. I do not say this to call out Paolucci for not having done his homework – he is and remains a leading expert on the relation between Marx and (positivist) social science. I rather mention this fact to illustrate the discourse this book addresses: rather than providing a broader insight into the question of the relation between Marx’s works and the idea of a ‘scientific character’ (of positivist or other origin) this book is directed at a very specific constellation of academic research practice, shaped by the divide between (empirical) sciences and (analytical) philosophy.  For the broader discussion on the Marxist critique of scientific practices (let alone ‘continental’ philosophers) this book bears little to no interest.