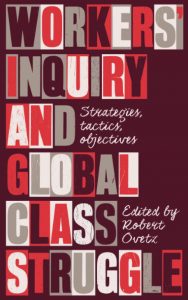 Katjo Buissink is a postgraduate student of sociology at the University of Waikato, researching …

Robert Ovetz begins this edited volume with a frank admission, that there ‘is little doubt that the global working class is on the retreat and has been for a very long time’ (1). Recognition of this might draw, and indeed has drawn significant parts of the left, into an inescapable pessimism about the future potential of class struggle and a militant workers’ movement. Workers’ Inquiry and Global Class Struggle, however, harnesses this sentiment to present a down-to-earth yet optimistic selection of case studies into the contemporary workers’ movement.

The title does not exaggerate, as the selection of case studies chosen is indeed a stunning sample of global class struggle today. The book includes studies from five continents, including prominent countries within the Global South such as China, South Africa, India and Mexico alongside the United States and the United Kingdom, both more commonplace in Western labour studies. With this selection covering a variety of socio-political situations from British neoliberal austerity to South African corporatism and the peculiarities of the Chinese ‘socialist market economy’ with its own capitalists, this geographic variety also allows readers to grasp how different political environments shape the strategies and tactics workers themselves are using in class struggle.

The case studies within Workers’ Inquiry and Global Class Struggle also vary, to its overall benefit, in several other ways. For example, it features several different scales of investigation, from a micro-level inquiry into a migrant worker in Italy to a meso-level discussion of Tümtis, the class-oriented Turkish affiliate union of the International Transport Federation, and a macro-level discussion of class and trade unions in several countries. The writers’ perspectives also range from Ovetz’ belief in a self-organised workers’ movement that does not rely on trade unions or collective bargaining, to Alpkan Birelma’s confidence in both the actuality and future potential of class-oriented trade unionism. This diversity of selection and presentation gives the pages of Workers’ Inquiry and Global Class Struggle genuine discussion, although each chapter stands alone, and accordingly, broad appeal amongst anybody interested in the present and future of the class-oriented workers’ movement, from the union rank-and-file to labour studies academics.

The most novel and engaging part of the book, however, is perhaps not the case studies it presents but the research methodology of ‘workers’ inquiry’ the book champions and presents through these examples. As Ovetz notes, ‘there should be no struggle before we know who we are, the conditions under which we work, how capital is organised, its weaknesses and choke points, as well as our sources of strength, power, and leverage’ (2). The book is ambitiously part of a new effort to conduct a global workers’ inquiry, which as Lorenza Monaco argues, should ‘embody the nature of global production’ and thus both go ‘beyond a traditional factoryism in order to embrace [both] non-production workers’ and ‘production workers, even if located outside of the now mostly deindustrialized capitalist core’ (244-5). Hence the selection of case studies is motivated not just by a scholastic desire for completion, but a political motivation to understand global class composition.

Ovetz and others who champion the workers’ inquiry claim for it a distinguished pedigree within a Marxian tradition going back to a questionnaire Marx published in the French La Revue socialiste in 1880, asking workers questions about their workplace and working conditions (for the curious, this was republished in volume 24 of the Collected Works). Reportedly, he did not receive a single response to this questionnaire, perhaps due to the somewhat arduous task of answering a one-hundred question survey. In any case, it was never a key component of Marx’s research and simply stands alongside other pieces, such as the ethnographic chapter 10 of Capital as glimpses of his theoretical interest in working class struggle.

A far more explicit connection is made with various twentieth-century socialist groups and publications, where the concept of workers’ inquiry was first seen in a more complete form, such as the Johnson-Forest Tendency and the Zerowork journal in the United States, or the Quaderni Rossi and Classe Operaia publications in Italy. While contemporary scholars such as Immanuel Ness have also influenced the modern workers’ inquiry, it is the latter Italian workerist (operaismo) or autonomist tradition that most clearly and directly shapes the concept of worker’s inquiry as presented in the book.

Ovetz follows Italian workerist Mario Tronti to argue the importance of ‘inverting capital’s perspective’ to look at how working-class struggle shapes capitalist development, rather than the conventional opposite perspective. As he proposes, ‘a workers’ inquiry into class composition provides us with confirmation that if there is no worker struggle then there is no need to innovate’ (6). The case studies that follow do indeed highlight how worker struggles have forced capital to adapt – whether that may be through accommodations or increased persecution of the workers’ movement.

In accordance with these political aspirations, a workers’ inquiry is presented as a somewhat-idealised ‘class science’ that is very firmly ‘not an academic exercise’ (8). This is not a kind of sociological Lysenkoism but rather a belief that a workers’ inquiry should be ‘by workers themselves or in collaboration with a co-researcher in order to understand the current class composition from the perspectives of the workers’ (11). Here it is uncertain how much of the workers’ inquiry as a methodology is practicable social science, and how much is perhaps an overly optimistic view of the working class’s potential for self-inquiry.

While some of the book’s contributors fulfil the requirement to be conducted by the workers’ themselves in a strict sense, such as Ovetz’s own chapter on the faculty union in the California State University system, many other chapters are not. For example, Jenny Chan, associate professor of sociology at The Hong Kong Polytechnic University authors the chapter on worker organising in China, and its counterpart on the Turkish militant union Tümtis is by Alpkan Birelma, an assistant professor of sociology at Özyeğin University. The standard of inquiry is high across the book, and a closeness to the conditions of the working class is felt throughout, although one obviously gains a better understanding of individual workers in the more micro-level chapters.

This is not designed to critique the authors’ efforts but rather to note the parallels with a far broader question that the workers’ movement has faced since its conception of how researchers and scholars should relate to the working class and its struggle. The workerist-inspired dedication on working class self-inquiry and self-organisation which Ovetz and others stand for is seemingly one of the main differentiating factors between the workers’ inquiry and the methodologies of other radical labour sociologists such as Michael Burawoy. Following from this premise, the question of how much of a role a researcher can have in a workers’ inquiry before it becomes simply an inquiry is unclear. It seems that even Marx’s original ‘workers’ questionnaire’ would not count by any provided measure.

There are immediate reasons why several of these case studies could not be researched, written and published by groups of workers themselves, e.g. industrial proletarians of a Jasic factory in southern China. Here the use of a ‘co-researcher’ (9) is understandable. But how can we reach a more general recognition of workers’ inquiry’s self-defined boundaries?

Lorenza Monaco, author of a chapter on Indian autoworkers, suggests we consider workers’ inquiry as either being ‘from below’, if initiated in response to ‘the needs of the workers themselves’, or ‘from above’, if the research is initiated by the ‘militant researcher rather than the workers’ (243). A similar above/below dichotomy is given by the editors of the journal Notes from Below in their chapter on class composition in the UK. This framing, while perhaps not perfect, is a useful step in deepening our understanding of the relation one should hold to class struggle and worker organisation as class-oriented researchers, whether institution-affiliated or independent.

Inquiries ‘from above’, i.e. ‘instigated from the outside’ (176), face unique issues due to these origins. Ovetz describes a workers’ inquiry in ten call centres which was suddenly brought to an end by the researchers’ dilemma of whether, after observing no discernible form of workers’ struggle, they should actively engage in a process of organising and fostering this struggle on the basis of the inquiry. They eventually decided in the negative and simply published the results. Given that the researchers actually found jobs in these call centres to facilitate the inquiry, the end result was a kind of purely intellectual ‘salting’, a term for when trade unionists get jobs at specific workplaces in order to facilitate their unionisation. The well-meaning efforts of the researchers to link with the working class and support militant class struggle ‘from above’ did simply end up another academic exercise absent a clearly perceivable ‘from below’ movement. This perhaps suggests the need for a more sophisticated framework where both co-research partners can coexist and form this partnership within an organised workers’ movement. Here inquiry ‘from within’ and ‘from without’ might be a better conceptual framework.

Both the example of the call centres above and the case studies in Workers’ Inquiry and Global Class Struggle highlight that, for researchers looking to partake in workers’ inquiry and to understand the current state of class struggle, pre-existing organisation and trade union presence makes for a more engaging and clear inquiry. This is the case for Ovetz’s own study looking at the successes and failings of strike preparation in Californian tertiary education and the California Faculty Association, as it is for Patrick Cuninghame’s chapter on the Coordinadora Nacional de los Trabajadores de la Educación dissident teachers’ organisation in Mexico, or Shawn Hattingh and Dale McKinley’s discussion of the Simunye Workers’ Forum in South Africa.

While Workers’ Inquiry and Global Class Struggle begins with a frank and negative judgement on the current state of global class struggle, it is difficult to remain as pessimistic as one makes their way through the book. All the case studies presented from Shenzhen to San José have no illusions about the relative strength of the capitalist class, but regardless show a global working class resisting the attacks of capital and creating a new class composition even when abandoned by social democracy and the remains of the ‘official’ workers’ movements from last century. This is possible thanks to the commitment all authors share to the (varied) practice of workers’ inquiry and critical documentation of the class composition.