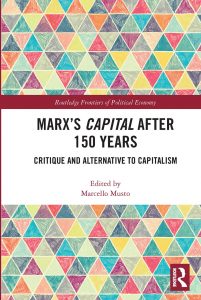 Marx’s Capital After 150 Years is collection of seventeen papers presented at an international conference of the same name hosted by York University in Toronto in 2017. A number of the presentations can be viewed on the YouTube channel Marx Collegium, along with presentations by other conference participants whose papers were not included in the book.

Immanuel Wallerstein, who is among the latter, began his talk on the contemporary relevance of Marx by noting that the presenters at the conference could be roughly divided into two groups: those who point out an overlooked idea of Marx and ‘berate others for not having noticed’ and those who point out that Marx himself had neglected something and ‘should be somewhat revised to improve that’. Such arguments, he observes, could go on ad infinitum, whereas it is a desire to know ‘what to do now about the bad state of the world’ that really draws people to Marx today.

Borrowing those two broad categories of the ‘misunderstood Marx’ and the ‘mistaken Marx’ seems a useful way to organise this review of a book that contains such wide-ranging content related to Marx by so many authors. The book itself is organised into three parts (I. ‘Capitalism, Past and Present’; II. ‘Extending the Critique of Capital’; III. ‘The Politics of Capital’), but the content of the chapters does not fit very neatly under those headings.

The highly readable and informative introduction by Marcello Musto that opens the book shows how different the real Karl Marx was from the dogmatic image presented by his ‘adversaries and self-styled disciples’ by tracing the evolution of his critique of political economy from the 1857–58 notebooks (later published as Grundrisse) to the publication of the first volume of Capital and the writing of the drafts for the other two volumes. The story of Marx’s continual struggle to refine his understanding of capitalism is skillfully interwoven with scenes of his personal battles to survive amidst constant health and financial problems.

An outstanding contribution that also examines an overlooked aspect of Marx’s thought is Bob Jessop’s chapter on how the discoveries in cell biology in the nineteenth century influenced the decision to begin Capital with the analysis of the commodity, which is described as the ‘economic cell-form’ of the capitalist mode of production. Jessop explores this analogy and its limitations, as part of a consideration of Marx’s method of analysis and presentation in Capital.

Pietro Basso, in the chapter titled ‘Had Capital been written today’, also considers the starting point of Capital, but argues that Marx made the book unnecessarily difficult by beginning with the commodity as the elementary form of capitalist wealth, which presents the reader with a challenge compared to scaling a ‘seventh-grade mountain face, with no warming-up in advance’. Basso sees the choice of such a difficult beginning as Marx’s attempt to ‘settle accounts once and for all both with previous economic theories and with the last great production of philosophy, the rational kernel of Hegel’s logic, by incorporating their highest achievements in a dialectical exposition of the material of economics’ (209). A more reader-friendly approach, Basso argues, would have been to position the historical passage on the primitive accumulation of capital as the opening chapter.

Another would-be editor of Capital, but one who demands even more of the reader than Marx himself did, is Bertell Ollman, who regrets that Marx downplayed his dialectical method and theory of alienation in order popularise his presentation in Capital. In his chapter, with the twisted tongue-in-cheek title ‘Toward a Marxist revision of Marx’s revision of Marxism in Capital’, Ollman explores the resulting gap between ‘what Marx came to believe’ about capitalism ‘and how much of it he chose – for largely tactical reasons – to present to the public’ (277).

Leo Panitch, in ‘The Challenge of Transcending Capital’, critiques Engels’ description of capitalism as a ‘mere passing stage in the economic history of mankind’ (83) and ponders ‘how Marx’s Capital needs to be transcending in order to help figure out how to eventually transcend capital itself’ (88). More specifically, Panitch suggests the need to supplement Capital with a ‘further development of [an] historical materialist theory of the capitalist state’ (89), stressing the ‘importance of a socialist strategy for entering the state to the end of transforming’ (90) it. Setting aside the feasibility of this gradualist strategy for socialism, it seems worth pointing out that Marx had in fact planned to write a separate book on the state as part of his critique of political economy, so that the absence of an elaboration of the subject in Capital was certainly not an oversight on his part.

Gary Teeple, in ‘The Neglected Chapters on Wages in Capital’, considers the centrality to Capital of the ‘dynamic and contradictory relation’ (232) between surplus-value and variable capital by examining the chapters dealing with wages and wage forms, countering the view of Capital as concerning ‘the political economy of capital alone as if separate from a consideration of labour’. From this perspective, he dismisses as ‘difficult to fathom’ the suggestion of Michael Lebowitz that there is a ‘missing book on wage-labour,’ (234) which Marx had originally planned to write. There does seem to be evidence in the pages of Capital itself, however, that the analysis of wage labour was only to the extent necessary to elucidate ‘capital in general,’ such as the passage at the beginning of the chapter on time-wages where Marx notes that he will only briefly describe the two fundamental forms of wages because an ‘exposition’ of all the different forms belongs to the special study of wage labour. In any case, Teeple calls for a reading of Capital that unravels the wage form that ‘obscures the real relations of production’ and the various forms of wages that are employed to ‘defraud the workers of the value of their labour-power’, against the backdrop of capital’s ceaseless effort to ‘maximize the surplus extracted at the expense of wages,’ which the author sees as the ‘main thread of the argument of Capital’ (241).

Kevin Anderson, in ‘Five Explicit and Implicit Notions of Revolution in Capital’, examines different passages in the first volume of Capital that present different conceptions of revolution, revealing both the diversity of Marx’s conceptions of revolution, which center on ‘capital and labour’ but do not adopt a ‘reductionist manner that excludes factors like race, ethnicity, colonialism, the state and the relationship of non-capitalist social structures to modern capitalist ones’ (206).

Richard Wolff, professor emeritus at the University of Massachusetts Amherst and YouTuber extraordinaire, discusses ‘Marx’s new concept of class,’ centered on the concept of ‘surplus’ (rather than surplus value) that he inherits from Paul Sweezy. Wolff argues that pre-Marxian concepts of class had centered on property or power relations instead of defining it in terms of the relationship to surplus production. Wolff says that Marx’s ‘new notion of class as a particular social process that occurs together with the physical labour process within the activity known as production’ (110) is identified ‘early in Capital, Volume 1’, but the chapter does not quote any specific passages from that work so it is difficult to know precisely what the author is referring to.

Another topic addressed in the book by multiple authors is gender. Both Silvia Federici and Himani Bannerji point to the limitations of Marx’s understanding of the sexual division of labour of his own time. As she has presented at length in her books and articles, Federici points to the ‘under-theorization’ of reproduction which was centered narrowly on waged industrial workers at the expense of considering household labour. Bannerji, similarly, takes Marx to task for a view of ‘women as essentially reproducers rather than producers’, as compared to men who ‘transform themselves and nature, develop productive forces and revolutionize society’ (154).

Étienne Balibar, in his chapter, considers the famous line in Capital about the ‘expropriation of the expropriators’, describing as one of the ‘great puzzles in the history of modern socialism’ that this ‘“revolutionary conclusion” which marks the ‘achievement’ of Marx’s argument is ‘not at the end of the book’ (41). Balibar speculates that it may have been concealed in the penultimate chapter as a way of not drawing the attention of government censors. Neatly summarizing his entire chapter, which aims to subject the famous passage in Capital to ‘an exegesis at the same time literary, philological, philosophical, political and even theological’ (39), is unfortunately beyond the allotted space of the present review.

In a chapter on ‘the persistence of Marx’s humanism,’ Mauro Buccheri adopts a similar free-ranging style as Balibar, but with rather less stylistic success, it seems to me, as a snippet of the opening 12-line sentence may demonstrate: ‘In the ubiquitous swamp of Neoliberal capitalism, a time of pestilence and plagues, of zombies, vampires and other monsters of the market, of fuzziness and uncertainty, of religious fundamentalisms and solitary atheism, of violence and repressive tolerance, of Empire and Multitude, of globalization and right-wing populism, of culture wars, and abject poverty, failed and failing states’ (247). Epic list-making seems best left to the masters of the genre such as Henry Miller and Walt Whitman.

In considering the book as a whole, my own preferences as reader and reviewer was for the chapters that set out to examine a clearly defined aspect of Capital, as Marx in that work was nothing if not scrupulous in the way that he posed his theoretical questions. Before raising the question of what Marx should have done, certainly one needs to first be sure that what he actually did is adequately understood. Yet some chapters grouped here under the ‘mistaken Marx’ category did not seem to take Marx to task without always clarifying the exact theoretical question at issue or dealing with too many different questions at the same time.