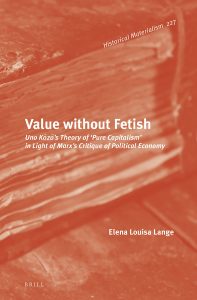 Elena Louisa Lange has devoted over 500 pages of text to a critique of the work of Japanese Marxist Kōzō Uno (1897-1977) and some of his disciples. The opening sentences of the introduction incisively summarize the agenda: ‘This book wants to put the critique of the fetishism of the bourgeois relations of production back into the Critique of political Economy. Its aim is to demonstrate that the disavowal of the critique of fetishism strips the Marxist project of its critical core, its raison d’etre.’ (3)

The only theoretical work by Uno available in English (leaving aside, as Lange does, a recently translated historical work on economic policies in eighteenth and nineteenth century Britain) remains the abbreviated edition of Principles of Political Economy: Theory of a Purely Capitalist Society (1980). Lange’s knowledge of Japanese has enabled her to read and summarize Uno’s collected works. One reason for the length of the book is that the author provides extensive quotations from Uno’s texts, frequently followed by equally extensive passages from Marx.

Uno is probably best known outside Japan for his three-level method which differentiates between a level of pure theory, the historical stages of capitalism and a level of analysis of ‘the actual phenomena’. Lange’s assessment does not address the differentiation of the historical stages. Her objection is to the criteria, or rather the lack of them, for which features of a capitalist society are included at the level of ‘pure theory’. Uno himself criticizes Marx for insufficiently differentiating in his work between supposedly ‘pure’ and ‘impure’ elements. But as Lange exposes, Uno’s own model of ‘pure capitalism […] oscillates between a non-historical, ideal-typological and radically abstract object […] and a historical one most paradigmatically linked to the era of industrial or “laissez-faire” capitalism in the 19th century.’ (78) The latter element in the model is also suggested by Uno’s dubious assertion in the Principles that states are ‘alien to capital’. This helps explain why some of Uno’s disciples, such as Robert Albritton, continue to argue that since 1917 the system has become progressively less capitalist, because it is supposedly less regulated by the ‘law of value’. Lange is absolutely right to respond that the world has never been as capitalist as it is now. (490)

However, Lange’s critical focus is on the theory of ‘pure capitalism’. Over two lengthy chapters she addresses first ‘Uno’s Theory of Value’, and secondly the proposed reconstruction of Marx’s Capital in the Principles. Her most distinctive contribution is her response to Uno’s proposed reconstruction of the opening chapters of Volume 1 of Capital.

Uno makes two arguments which have far-reaching implications for Marx’s value theory. Firstly, he argues that Marx’s introduction of ‘abstract labour’ as the substance of value in chapter one is ‘premature’ and based on a problematic claim that labour is the only ‘common property’ of two commodities in an exchange relation. For Uno ‘abstract labour’ is a property of labour which presupposes the sale of labour-power as a commodity and ‘mass production’ under capitalist control. Secondly, he claims that Marx’s analysis of the forms of value is deficient because it excludes consideration of the ‘subjective wants’ of the commodity owners for the use-values presented as equivalents. Chris Arthur, from a more explicitly Hegelian position, agrees with the first of Uno’s arguments, but not the second.

The most serious consequence of these moves by Uno is the separation of Marx’s derivation of money from its essential relation to abstract labour. As Lange correctly insists, money is the ‘explanandum’ not the ‘explanans’ in Marx’s analysis. (158) The whole purpose of the complex derivation of money in chapter one is to establish that money is the visible incarnation of social labour in general, and the expression of abstract labour in a material form. The section on the fetish character of the commodity, which follows the ‘forms of value’ section in later editions of Capital, derives from the inversion in which a social relation between private producers appears as a relation between things, money and commodities. Uno and his disciples having detached money from its relation to abstract labour, concluding with money as an autonomous fetish-object. The Unoists, like the classical political economists critiqued by Marx, remain ‘dazzled’ by money instead of explaining its necessity. Hence Lange’s well-founded charge that they present ‘value without fetish’ or as she states on the evidence of several quoted passages from Uno himself: ‘Uno’s momentous and decisive demarcation against Marx’s theory of value and money lies in suggesting the replacement of the notion of abstract labour with money itself as the “autonomous” existence of value.’ (222)

We have one fundamental disagreement over whether, as Lange claims in agreement with Arthur and other Hegelian readings, Marx presupposes a fully developed capitalist mode of production in the opening chapters of Capital. Marx evidently assumes a social division of labour with specialised private producers who can only survive by selling their product, but does not specify further at that point the class relations of production. As Engelskirchen proposes, following an Aristotelian rather than Hegelian procedure, this is a causally generative ‘structure of interdependent autonomy’ in which the producers could be peasant farmers, slaves on a sugar plantation or capitals employing wage-labour. That, I would argue, provides a firmer foundation for a critique of the proposed reconstructions of both Arthur and Uno.

In her more wide-ranging chapter four on Uno’s Principles, the exposition and commentary stretches over 164 pages, longer than the abbreviated edition translated into English. Lange relentlessly tracks the Unoists down a succession of paths which traverse the whole corpus of Marx’s work on Capital. One argument serves as a guiding thread. Uno presents Marx’s law of value as a ‘Law of General Social Equilibrium’ – similar, as Lange says, to Paul Sweezy’s interpretation. For Uno the law of value is inseparable from a theory of reproduction in which, as in Marx’s reproduction schemas, there is balanced growth and supply corresponds to demand. Lange challenges Uno’s appropriation of Marx’s schemas to support what she terms an idea of ‘pre-established harmony’. She also connects Uno’s ‘use-value based view of social reproduction’ to his earlier version of a value theory in which the goal is not the accumulation of surplus-value, but ‘the satisfaction of needs by use-values’ (308-9).

Lange is right to emphasize that for Marx the law of value is not primarily a theory of equilibrium prices but a law which asserts itself only in and through fluctuations and crisis. However, her own account of the law of value would have been clearer if she had connected it more precisely to the regulation of the competition between capitals by changes in the productivity of labour. Lange also counterposes Marx’s crisis theory to a theory of business cycles, although for Marx the two were interwoven – even though the weaving was left unfinished. Crises are cyclical not permanent in Marx’s account but their severity varies depending on the interaction of longer-term tendencies. There are, however, good grounds for a critique of the specific Unoist theory of crisis which proposes a profit-squeeze tendency as a function of a shortage of labour and ‘excess capital’. Regrettably, Lange ignores the work of the Uno-influenced Makoto Itoh, on the crisis period of the 1970s and 1980s, although this had more impact on Anglo-American debates at the time than Uno’s more general theory with its problematic ‘law of population’.

One problem of a presentation organised in response to the structure of Uno’s book is that Lange’s own position on specific questions of economic analysis is not always clear, or even consistent. An especially problematic example is her treatment of the notorious so-called ‘Transformation Problem’. To make the point briefly: Lange refers positively to work by both Michael Heinrich from 1999 and Fred Moseley in his recent book. But there is a fundamental difference between the two. Heinrich argues that Marx went wrong in his quantitative analysis and didn’t need to go there. Moseley argues that Marx got it right.

Another weakness is a tendency to overstate her case. To take only one example, from a cursory and unnecessarily dismissive commentary on Thomas Sekine, Lange quotes a passage in which Sekine refers to the formation of a general rate of profit through a process of arbitrage. She then concludes that he ‘ultimately discards’ Marx’s theory of surplus-value. But the passage quoted clearly refers to the process of equalization of profit-rates between sectors not to the underlying determinants of the general rate of profit which emerges from that process. Sekine, in his major work on the Dialectics of Capital, recently reissued by Lange’s own publisher, endorses Uno’s proposed reconstruction but he does not discard Marx’s analysis of surplus-value.

Lange’s scattergun approach in the final part of her book weakens the force of her earlier critique. It may also provoke howls of righteous indignation from surviving Unoists but hopefully they will respond to this critique with the seriousness it deserves. This is a significant contribution to an ongoing debate over value and crisis theory. It is also testimony to the continuing fertility of Marx’s texts at a time, however, when capitalism’s resilience as a global system is also very evident.