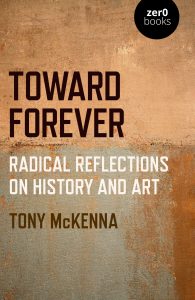 Tony McKenna
Toward Forever: Radical Reflections on History and Art

Fouad Mami is a literature scholar from the department of English, University of Adrar (Algeria). …

We live in highly counterrevolutionary times. The crushing of the hirak (popular uprising) in Algeria (2019-2021) and the late coup in Tunisia (constitutional or not) are examples in a long string of similar maneuvers, plumping the liberatory impulse and promise that started in the region a decade ago. Reading the eleven essays in Toward Forever, varying between reflections on current events or critical engagements with works of arts, recalls the Hegelian sense of the Absolute, specifying that people are determined – no matter the obstacles – for freedom. Thematically varied, McKenna’s volume spots the whereabouts of radical consciousness, those subversive and anticapitalistic moments in time that often stay under the radar.

The book’s central question teases out aspects and dimensions of the mundane that remain unnoticed in consequence of the real domination of capitalism, translating advanced levels of reification. McKenna stipulates that readers and people in general will not only be slightly mistaken but fundamentally wrong in failing to note that capitalism cannot degenerate every facet of history or culture. Despite the massive propaganda to the contrary, and provided one is theoretically armed and their senses are sharp, one can register that even under the reifying hegemony of capitalism, there exists several venues and chances to beat the monotonous and calcified interpretations, opening horizons for a world free from domination and exploitation.

Chapter one discusses the Syrian uprising, from 2011 to the present. Remarkably, McKenna qualifies it as a revolution because of the material conditions that made life next to impossible for the oppressed: the draught (2007-2010), the repressions, the abrupt neoliberal policies. Not for nothing counterrevolutionaries present the events in Syria as a senseless mayhem, a Hobbesian war of all-against-all, in order to abandon the class dimension and domesticate the oppressed both in Syria and elsewhere by selling the illusion that such efforts are doomed.

Chapter two traces the changing fortunes of the Sicilian Mafia ever since its emergence in the late nineteenth century to the early 1920s. It makes a lot of sense to register that the Mafia started as communal structure defending the rights of the peasants in general and the emerging rural bourgeoisie in particular (during a time when the bourgeoisie was a progressive force) from the inefficiency of the largely bypassed Bourbon monarchy. Later, the Mafia went to bed with capitalistic forces, pulling its energy to restrain the peasants’ access to ever-shrinking communal lands and silencing radical labor voices.

Chapter three offers a novel understanding regarding the alarming suicidal rate among Japanese youth. With deindustrialization spelling uncertainties for gaining a job-for-life, many youths blame themselves instead of pointing the finger at the political economy that dictate their misery. Just a generation ago, and despite the exploitative labor practices, shafu or the company spirit, used to mitigate the alienating effects among workers. With such structures gone, Japan becomes a suicide forest.

Chapter four argues for an anticapitalistic genesis of Islam. Here, Islam – the faith – not only stands against the anti-egalitarian ethos of Meccan capitalists but is founded to reverse intensifications of social relationships that destroyed ‘key elements of tribal egalitarianism’ (82). Recovering tribal egalitarianism, the ethos that had been predominate before the Neolithic Revolution, or some version of it, solidifies the revolutionary credentials of Islam.

Chapter five is an interpretation of Dan Brown’s novel Da Vinci Code (2003). McKenna notes that the simplicity of the plot and white-versus-black type of characters do not indicate the frivolity of its overall project. The encroachment of state logic on religion ends in having a state religion that barely, if at all, evokes the egalitarian attributes of the Early Christians. Only when Christianity becomes institutionalized as a state religion does the trinity start evoking an enslaving dynamic.

Chapter six reads a mid-Western fairy tale, The Wonderful Wizard of Oz (1900) by Frank Baum. It is a tale that McKenna finds brimming with the mirroring effects pertaining to the damages perpetuated by United States’ capitalism in the late nineteenth century. Still, he finds the film both a celebration and a critique, ushering in a possibility for an egalitarian, more inclusive approach to the American Dream.

Chapter seven takes a modern, even feminist, adaptation of a Greek myth in Madeline Miller’s 2018 novel Circe. Unlike Athena and Zeus, McKenna observes that Circe’s alienation from the realm of other divinities obliges her to undertake manual labor. Taking pride in manual labor runs parallel to the shunning off parasitic leisure. Both resonate with contemporary society, winning Circe to the side of the oppressed.

Chapter eight reflects on the movement of Conceptual Art and how it is ontologically embedded with finance capital in spite of its presumed experimentation. McKenna specifies that the measure for true and authentic art remains its ability to make the leap from the quantitative to the qualitative. In this respect, he finds that only the superrich or the pretentious bourgeois value Conceptual Art.

Chapter nine approaches Three Billboards Outside Ebbing, Missouri (2018). The film, according to the author, does not even begin sketching a closure to the bereaved Mildred, who has lost her child. She cannot reconcile with the decadent institution she works for and the world she lives in as justice remains denied. The deus ex-machina resolution underlines how the film fails to denude the socio-historical contradictions besetting contemporary US society, feasting on the sensational and discarding the rational. Similarly, chapter ten explains how the TV series The Sopranos (1999) testifies to the abuse of the quantifiable as it degenerated all communal values. As the hammer of modernity, the law of value spells a collapse into an ontological nihilism. The issuing violence comes to merely express this moral void, and certainly never as a fault of human character.

The last chapter reflects on a third phase, known as the black paintings in the career of the Spanish artist Goya. The transition from a court painter to a first-rate and world-renowned artist cannot overlook the violence that marked Spain’s peculiar way of entering modernity. The Napoleonic invasion, the absolutism of the anachronistic monarchy along with an inhibitive, if not defeatist, religiosity are key elements that synthesize the painter’s approximation how modernity had accelerated seismic changes in his country.

Perhaps the thread that connects all the chapters is class struggle. In his indebtedness to Marx’s vision, McKenna cannot pretend that class struggle has not been ossified in order to defuse the radicalism of the oppressed and drain them through pitiable worries that are often counterproductive for whatever egalitarian causes. The book is thus his answer to reviving the class dimension in issues pertaining to history, culture and art.

McKenna in this collection proves that there exist several openings for the oppressed to take and that capitalism, beyond appearances, is in essence no more than a bubble. In noting that in the absence of historical incentives humans cannot resort a priori to violence, and that violence as displayed in the case of either the Syrian Revolution, the Sicilian Mafia, alarming suicide rates in Japan or The Sopranos remains the exception than the norm, an expression of the violent structures and modalities inherent to modernity, McKenna’s project shows a deep affinity with the Hegelian-Marxist approach.

The ingenious insights aside, one can still note that McKenna entertains a liberal definition of revolution, one that is inclusive of reform and recovery projects. For in lauding the egalitarian ethos of Islam on the ground of a presumed predisposition to universalism, the author’s wishful thinking takes over the historically-entrenched method. The same observation applies to early Christians as the author’s project is bent on a recovery of the authenticity of the community of the faithful. Recovering the tribal tradition of yore or the community of the early faithful complicates one’s understanding vis-à-vis the ways the universal project of Islam accommodates or restrains the resulting intensities from abandoning nomadic life styles and adopting sedentary ones. As it cannot backtrack on the development of exchange value, one wonders if McKenna’s call stipulates that whatever is revolutionary about Islam lies in its firmly reformist agenda: always balancing the evil from excessive accumulation and never addressing the root of evil by calling to revoke money. In this way, Islam cares for the symptoms but leaves the cancer in place! Islam and the Roman Empire after instituting Christianity both agitate to dissolve tribal identity for a particular brand of universalism which first and foremost facilitates the opening of trade routes, thus accessing wider markets.

Regarding the other chapters, one cannot avoid that underneath the analytical tone, there exists a nostalgia for times immemorial where exchanges had been less complex, a romantic disavowal from the intensifications of social relations spearheaded by exchange value. In respect to the Da Vinci Code chapter, it is not the state that corrupted the simplicity of faith. Neither the state or faith has autonomy; they both subscribe to transformations in the mode of production. Only a market-driven monotheism can save the crisis-ridden Roman Empire and the solution comes in replicating the figure of the Christ along with the Emperor’s absolutism.

Regarding Conceptual Art, Mckenna does not specify that the urge for abstraction is dictated to ‘keep’ the lower classes outside history, and that art, very much like religion, testifies to humanity’s alienation from the ethos of a primordial order. Accelerating from this observation, one should not panic in the face of deviations either in art or religion since they register dialectically a negation of negation, stipulating a possibility for a non-alienated and non-alienating order à la Marx’s Gattunsgwesen. Likewise, McKeena overlooks how in accessing dignity through manual labor, Circe (Miller’s protagonist) practically endears slavery and enforces the exchange of value as the exclusive mode of production. The negation of the negation in Circe’s case does not synthesize an egalitarian order because the prevailing logics among the gods remains largely in favor of a hedonistic life style made possible by exploiting the oppressed.

Overall, the book is an excellent read for anyone open to challenge their sedimented conclusions vis-à-vis the role of class consciousness, be it in history, religion or art history. McKenna’s conversational style engages the reader and saves one from the stupefying influence of mainstream culture; it encourages one to seize the central role of class, by refusing to be drawn into identity politics in all its pathological instantiations.