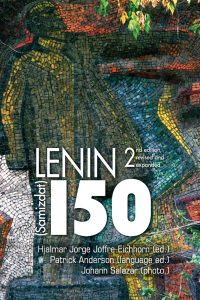 Yağmur Ali Coşkun is a teacher, labor and immigrant rights activist, and author. He currently …

April 2020 witnessed Lenin’s 150th birthday amidst the extraordinary times marked by the Covid-19 pandemic and popular revolts sweeping the face of the earth from Chile and the US, to Lebanon and Iraq. Lenin150 Samizdat, a collection of essays written and published to honor Lenin during the extraordinary year of 2020, definitely bears the stamp of both its subject’s and its contributors’ times.

In his introduction, editor Joffre-Eichhorn speaks of the tension between the (literally) monumental hope the name and statues of Lenin evoke – revolution, single-minded determination, undying energy – and the Benjaminian pessimism emanating from the damage the experience of defeat has dealt to this name: Stalinist terror, the collapse of the USSR, neoliberal onslaught, all embodied in the scars on the Lenin monuments of Kyrgyzstan (3-4). The result is a Benjaminian book on Lenin characterized by this tension: a mosaic-like collection of essays with different (sometimes contradictory) points of emphasis, problematics and political suggestions, each separated from each other with sometimes deliberately blurred but always skillfully taken photos in a montage-like sequence (308). A daring quote by the Andean indigenous leader Tupac Katari, a ‘poetic interlude’ by the Kyrgyz-Soviet poet (previously unknown to English-language readers) Bokonbaev (134-141), a revolutionary but melancholic poem by Brecht (313-315), and another daring quote by Lenin’s favorite author Chernyshevsky, embellish this book-length Lenin ‘montage’. As such, Lenin150 Samizdat emerges as one of those rare books with covers doing justice to the content: we are greeted with a Kyrgyz mosaic of Lenin pointing the way forward, which sums up the book’s approach to its subject matter.

This montage-like structure, very reflective of our confused and fragmented times, is both the greatest strength and weakness of Lenin150 Samizdat. It is a strength in so far as it allows each contributor to ‘have their own Lenin’, thereby revealing the concrete-universal nature of his thought, in which many concrete subjectivities can find something useful (as emphasized by Del Roio (89), and Mamedov (116)). Today, when Leninism is by and large discredited on the left, it is a relief to see that many different left intellectuals find value in Lenin’s thought. However, in so far as these subjective points of view aren’t enjoined in a dialectical synthesis that points a way out (that is, a politics in the profound Leninist sense, as elaborated by Badiou (16)), they remain precisely what they are – subjective points of view. Valuable as they may be in and of themselves, these various points of view cannot answer the famous question Lenin posed throughout his career as a Marxist strategist: what is to be done?

This admitted weakness shouldn’t blind us to the book’s great merit of gathering together a great variety of takes on Lenin, separated by time and place. The range of contributors is truly global in scope: other than famous European and North American writers (Badiou, Žižek, Dean, Anderson etc.), four Latin American, two South African, one Chinese and four post-Soviet country (two of whom are from the Soviet periphery) authors comprise the collection.

Of particular interest are essays by Georgy Mamedov and Molaodi Wa Sekake, both advocating creative returns to Lenin in a post-Leninist time and from post-‘Leninist’ spaces to solve quite strategic problems.

Mamedov, writing from the post-Soviet Tajikistan (his essay opens with a recollection of the Tajik Civil War that ensued after the Perestroika), tackles with the thorny issue of ‘identity politics’ in the field of gender and sexuality inequality. Quite unlike most of the ‘post-Marxist’ scholars in the field, he sets Lenin’s approach to the ‘nationalities question’ as an example of a Marxist approach to the problem. A concrete, proletarian internationalism was to be premised on ‘non-assimilation of minorities and the inequality of the oppressor nation’. A ‘dividing line’ between an (idealist) ‘abstract internationalism’ that demands the particularities of oppressed nationalities be submerged in the pseudo-universality of ‘equality’ and a ‘proletarian internationalism’ that ‘addresses the concrete contradictions of interethnic relations’ (116) was all the more necessary in the face of the problems of socialist construction.

Based on this Leninist ‘non-assimilation’ principle, Mamedov advocates a ‘revolutionary identity politics’ (117), in which the struggle against the universal (class) oppression will come together with that against specific forms of bodily oppression in a non-antagonistic relation (118-119). The concrete form of this joining together, according to Mamedov, can take separate women’s and queer political organizations in alliance with more traditional workers’ organizations (120). Mamedov is seeking Leninist solutions to (allegedly) post-Leninist problems. His willingness to continue the Leninist legacy against the grain of anti-Soviet tide and neoliberalized identity politics must be applauded.

Similarly, Wa Sekake calls for a return to Lenin against the left intellectuals of the past who ‘gave up the revolutionary combat gear and joined the merry-go-round of intellectual trend’” (218). Important as this Leninist criticism of the academic left is, Wa Sekake spares his hardest blows against those Third World liberation leaders and organizations who had claimed Lenin’s mantra in the past century. Having rallied millions against imperialism with hopes of freedom and equality by invoking Lenin’s legacy, these leaders have constituted themselves into ‘a decadent political elite […] neocolonial and neoliberal steroids’ (215). Against these corrupt national bourgeois who ‘resurrect’ Lenin to ‘kill [him] again’, to use his name to ‘pacify, not agitate’ the population (214), Wa Sekake invokes three constituent elements of Lenin’s thought and action: ‘clarity of thought [and] single-minded sense of purpose’ (219), we find his ‘thought from below’ in which the particularities of his own country ‘informed the international’ (219-220), and his consistent proletarian anti-imperialism (221).

There are three major shortcomings of the rest of the book. First, while each contributor has found something useful in Lenin’s thought, some essays tend to read almost exclusively subjective. Thus we read an entire essay by Timofeeva about witchcraft and its social stigmatization at the dawn of capitalism (149-160) to get to the notion of ‘collective miracle’ in Lenin’s praxis (156), premised on some rumor that one of Lenin’s ancestors might have been burned as a witch – a loose connection at best. Similarly, Hatherley’s intervention is less about Lenin or his possible relevance for today, but more about his recollections of his Trotskyist parents, and how they were politically wrong but ethically righteous (79-85).

This extreme subjectivism tends to reduce Lenin’s praxis to an abstract moral quality (hope in collective miracles in Timofeeva, resistance against individualist and competitive ethos in Hatherley) in place of concrete political strategy to achieve these ethico-political goals, thereby proving the Hegelian point that subjectivist stances are in fact abstractions par excellence. Correspondingly, there is surprisingly little amount of concrete political strategic discussion – the second major defect of the book. The little discussion that exists in this field comes almost exclusively from the Maoist and Third-World Nationalist authors (Sandoval Cordero, Boron, Hui) or contributors with reformist overtones (Brie, Huber). While, of course, these authors’ theses are valuable and open for discussion, it is strange that their potential left critics refrain from applying Lenin’s thought to today’s conditions and charting up an adequate program that would face up to new challenges.

One reason for this lack of strategic thinking might be an over-association of Lenin and the October Revolution with the Stalinist terror that reigned after Lenin died – the third shortcoming. It is true that some authors are cautious to make the distinction clear and not to attribute (all) crimes of the latter to the former (25, 200). However, most authors who declare their solidarity with Lenin often concede too quickly those aspects of Stalinism which grew out of Bolshevism (‘one-party state’ in Anderson, 101; ambiguity surrounding the meaning of communism in Lane, 167; ‘dictatorship and terror’ in Suny, 258; banning party factions in Suvin, 284). While Suny evokes Trotsky’s famous claim that Bolshevism and Stalinism are separated by ‘a whole river of blood’ in his essay’s title and main body (255-256), he almost immediately takes a step back and asks the left to ‘recognize the continuities’ between the two leaders. Thus, Lenin gets subsumed and buried under the Stalinist myth of ‘Marxism-Leninism’, captured perfectly by the photograph on page 254. Symptomatically, the Maoist-Third Worldist authors mentioned above are entirely silent on the question of Stalinism.

A partial but important exception to both the abstract-subjectivist and Maoist/Third Worldist creeds running through the book is the dense essay by Rudhof-Seibert (171-184). After proposing that ‘anarchism’ (excessive reliance on a militant vanguard), ‘social-democracy’ (spontaneist gradualism) and ‘communism’ (Bolshevik-type organizing, a dialectical unity of vanguardism and spontaneism) are ‘structural differences in all emancipatory actions’ (173), Rudhof-Seibert then claims that the Covid-19 pandemic has opened up a ‘Lenin moment’ pregnant with possibilities and that calls for a communist (Bolshevik) intervention (185). However, he also concedes that the original Bolshevism ‘led to a literally bloody failure’ (179), and therefore shouldn’t be repeated. His alternative, based on Sartre’s sketch on a revolutionary philosophy that would replace not only Stalinist dogmatism but materialism as such, is a return to ‘party in the broad historical sense’, where ‘all those who [are] “political” must unite with one another’ (183). Rudhof-Seibert doesn’t specify the form this ‘ultrabolshevist’ party would take. Yet, the extreme broadness of admission and Rudhof-Seibert’s rejection of the objective place (182) of the proletariat as the main driving force brings to mind the humiliating experiences of NPA in France, SYRIZA in Greece and Podemos in Spain. Once again, insistence on the abstract comes at the expense of turning one’s back to the concrete lessons of failures.

This criticism shouldn’t be read as a mere dismissal of the book, however. Lenin 150 Samizdat is delightful in form and very rich in content. Just as each contributor has found something of value in Lenin, each reader will find a fresh breath in Lenin for today’s struggles. As Joffre-Eichhorn writes in his introduction, ‘no breath, no revolution’, so ‘let’s strap [Lenin] on our backs and go on marching’.