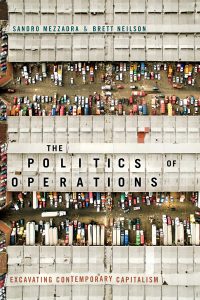 Burç Köstem is a PhD candidate in Communication Studies at McGill University. His doctoral …

The Politics of Operations is a book in transit. Throughout the book one finds oneself on the streets of Sao Paolo, Ferguson and Istanbul, in an airport in Bangkok, a bus in the Argentinian pampas and the slums of Mumbai. This spirit of heterogeneity derives from how Sandro Mezzadra and Brett Neilson (2019) construct their object, the extractive logics that have come to characterize contemporary capitalism and the horizons of struggle against and through which these logics act. Mezzadra and Nielson’s analysis of contemporary capitalism proceeds by bringing together three strands of literature. First, the book builds on empirical and situated studies of capital’s operations, across the disciplines of anthropology, feminist theory, geography, infrastructure studies, media studies and postcolonial theory. Second, the book stages an engagement with debates within and outside Western Marxism, particularly around the themes of uneven development and the state. Last, the authors demonstrate a commitment to the legacies of post-autonomist thought, reinvigorating this theoretical toolbox to grapple with the “infectious rhetoric of big data” that traverses the fields of extraction, logistics and finance (2). Rather than provide a chapter-by-chapter breakdown of the book, in this review I attempt to provide a précis of some of the main concepts developed by Mezzadra and Neilson. I end by offering a critical evaluation of the main themes and suggest ways in which these could be developed.

Broadly construed, the term “operations” is Mezzadra and Neilson’s answer to the vexed question regarding the relation between capital and difference. In Mezzadra and Neilson’s view, capital is a “difference machine,” which operates by mobilizing the open flux of heterogeneity into “specific differences” which can then be leveraged for capital’s benefit (37). Thus, while capital is characterized by totalizing tendencies, by a drive to reorganize the whole social fabric according to the logics of its valorization, it also structurally depends on continuously discovering new frontiers with which to expand the horizon of valorization, which exposes capital to conditions of temporal and spatial heterogeneity (65). For Mezzadra and Neilson, outlining a theory of “operations” becomes the hinge between capital’s workings in heterogeneous social and material circumstances and its articulation into wider arrangements of capitalism. To describe the term “operation,” the authors provide the reader with an image of capital “hitting the ground” (3). This image is used, not only to describe the ways in which capital vertically inserts itself in and complicates particular social relations, but also to focus attention on the material qualities of the grounds on which the interventions are being carried out. This characterizes their overall approach in the book, which, on the one hand exercises attentiveness and care towards the particular operations of capital and on the other focuses on the articulation of these operations into larger and changing social formations (around ideology, the state or the cultural dynamics of hegemony) that make up capitalism as a whole (70-71).

A key proposal of the book is that capital has become a “political actor” in its own right, “understood as an aggregation of forces” (6). Mezzadra and Neilson draw on Marx’s distinction between capital as personified in the individual capitalist (industrial capitalist, finance capitalist, merchant capitalist etc.), versus capital as describing the set of legal and political arrangements without which capitalism could not reproduce itself. They utilize this contradiction between capital as lodged into coagulated legal and political arrangements and capital concretized as individual interest, to outline a theory of “aggregate capital” (59). Drawing on Marxist sources, they explain how, under a previous social formation, the state had come to harmonize and represent the interest of aggregate capital by intervening in the processes of social reproduction through policy (62).

Yet Mezzadra and Neilson argue this is no longer the case (93). Aggregate capital, they claim, now operates at the level of the world market. This change is attributed to the emergence of extractive operations enabled by the sociotechnical inventions in fields such as finance, logistics and energy which originate in the 1970s. Crucially, this shift corresponds to how aggregate capital transforms from a surface of inscription upon which particular operations of capital mark their interruptions (say the stock market), to a “spectral body” that is itself “in excess of the parts that compose it” (70). Aggregate capital now “presents itself as always in excess over the action of specific capitalist actors, its power is rooted in abstraction” (57).

The term extraction sits at the heart of how Mezzadra and Neilson understand contemporary processes of capital’s valorization and accumulation. What is extraction? Mezzadra and Neilson only briefly gesture towards the history of this term, noting the violent colonial practices of extraction of rubber and minerals in South America (142). However, they instead prefer to “expand” the term, using it to name “the forms and practices of valorization and exploitation that materialize when the operations of capital encounter patterns of human cooperation and sociality external to them” (44). Thus, extraction, for Mezzadra and Neilson, is less about mining per se and more about data mining practices, financial schemes and logistics. In this sense, Mezzadra and Neilson situate their analysis of extraction within the proliferation of new media platforms and technologies. Yet their understanding of extraction is also broader, including, for example, how the self-organizing activities in slums, shantytowns and “peripheral” spaces can be colonized by financial logics.

Situated in this empirical setting, Mezzadra and Neilson also perform a reading of extraction based on familiar accounts of social cooperation and the social factory. Mezzadra and Neilson note the “radical split” that separates the subject of factory work: On the one hand, workers strip off the fetters of their own individuality, working at the level of general human potentialities, such as language and cooperation. Yet on the other hand, this gives rise to a collective body (the body of capital), which appears as the powerful will of a being outside them (178). This then gives Mezzadra and Neilson an analytic with which to outline the relation between exploitation and extraction, rooted in their account of politics and subjectivity. To do so, Mezzadra and Neilson artfully fuse insights from postcolonial theory and feminism with their understanding of extraction. For them, exploitation refers to the expropriation of the inherently productive capacity of subjectivity. Yet subjectivation is not only productive but also is produced, alongside the irreducible logics of gender and race, in ways that help sustain exploitation. Exploitation, then, is located at this tension between the “individual dimension of labor power and the collective use of it in the labor process” (204).

This long detour through subjectivity helps distinguish what Mezzadra and Neilson think is novel about the contemporary operations of capital. Contemporary practices of extraction refer to how the productive potential of social cooperation is appropriated outside the factory. Extraction helps characterize how finance, logistics and data mining are able to appropriate value from the social fabric directly, without the need for an individual capitalist orchestrating the process. Mezzadra and Neilson bring attention to the way in which financial schemes can insert themselves into informal economies, or algorithms are able to capitalize on patterns of human communication, to capture value. Ultimately, Mezzadra and Neilson explain they want their account of extraction to contribute to a theory of the “common” as the “main productive force that is exploited by capital” (208). Yet they argue that this common is not homogenous or freely at our disposal but has to be produced through the contingent struggles of the exploited.

Mezzadra and Neilson claim that this articulation makes it increasingly difficult to govern wage labor through reformist policies, since labor itself is immediately implicated in extractive dynamics that operate beyond the state. That so many states have found it difficult to govern even their own institutions and that demands such as providing healthcare or raising the minimum wage are interpreted as revolutionary in Europe and Northern America, helps lend some credibility to Mezzadra and Neilson’s account. This brings the book to a discussion of revolutionary politics in the face of contemporary conditions. Mezzadra and Neilson diagnose the legacy of the 2007-2008 economic crisis as a deep entrenchment of neoliberalism, through the types of extractive operations they analyze in the book. They are convinced that both the figure of the “citizen” and that of the “waged worker” are “incapable of furnishing a subject who can politically contrast the differential workings and specific interventions of capital today” (245). Their political prescription is to pursue a strategy of dual power, matching popular politics, resistance, and protest, with the promise of constituting autonomous counterpowers (242). The historical experiences of the Black Panthers or the Argentinian neighborhood assemblies that emerged in 2001, as well as the more recent and short-lived assemblies in Gezi Park, Cairo and Occupy are examples.

Despite the book’s achievements, there is nonetheless room to build on Mezzadra and Neilson’s work. First the book seems too quick to jump to subjectivity as a concrete site of struggle, given that the systems they are most interested in such as logistics, finance and extraction seem to operate on sociality in their most concrete, informal, infra-individual and undercommon forms. Considering this, one wonders, what modes of belonging and desiring beneath and above subjectivity will the extractive logics of aggregate capital attempt to capture, expropriate, or render commensurable? What does the becoming-logistical of friendship, of solidarity, or the universities look like at the level of desire? And how are these relations lived otherwise, in ways that complicate contemporary operations of capital and its embeddedness in regimes of colonialism and heteropatriarchy?

More importantly, however, for a book that is so focused on extraction, the terms ecology and environment rarely enter Mezzadra and Neilson’s account, beyond capital’s “impingement” on them. This is not merely accidental. As others have pointed out (Nelson 2015, Tola 2015), by attributing to human sociality such a productive force, post-autonomist thought seems to inflate the concept of “the social” in untenable ways. At its worst, this mode of theorizing treats everything as another avatar of the self-causing force of “the multitude”. Perhaps this is why Mezzadra and Neilson are able to so smoothly transition between mining and data mining. While the empirical attentiveness and care with which Mezzadra and Neilson approach their work helps assuage some of the worst examples of this flattening gesture, key theoretical questions remain about a sense of disparate orders and uneven distributions across the broader reproductive milieu of capitalism. How might we come to an understanding of ecology and environment beyond capital’s “impingement” on them? What irreducible dynamics are operative in more-than-human environments that impinge on the operations of capital? And how does this force us to revise foundational questions regarding the theory of value, our understanding of reproduction, our thinking around the term commons and our view of technology? While Mezzadra and Neilson provide plenty of material with which to begin thinking about these problems, they shy away from answering them directly.