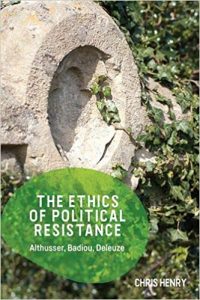 If wrong life really cannot be lived rightly, then for that very reason there can be no correct
consciousness in it either.

It is not altogether uncommon for those of us on the left to be drawn, by curiosity or by dread, to a series of intractable questions regarding the value of our praxis: Will our resistance ever be successful? Is our resistance in fact a mere facet of capitalism’s functioning as usual? What does it mean to effectively resist capitalism? Rather than placating inquiry in this direction, Henry addresses these trying questions frontally, dredging up the assumptions implicit in them and replacing them through a series of strategic, theoretical ‘sutures’. The Ethics of Political Resistance is a synoptic and masterful treatise on theoretical practice. However, at times the author’s attempts to construct a linear narrative that runs via Badiou to Althusser and Deleuze seems an overly-ambitious undertaking. The reader might be surprised to discover after having perused Henry’s book that Badiou, Althusser and Deleuze were contemporaries, actively engaging with each other’s work, and closer textual examination is needed to support many of Henry’s claims regarding the philosophers. I would suggest that these exegetical deficiencies are partly responsible for the disappointing view of political resistance ultimately endorsed.

Grounding the critical portions of the book is Henry’s definition of dogmatic idealism, which he uses to debunk Badiou’s and Althusser’s philosophies. He defines this, following Kant, as ‘the use of an idea without prior understanding of its function’ (2). Applying this to Badiou in Chapter 1, Henry identifies three dyads as central to the latter’s philosophy – truth/doxa, intelligible/sensible, and is/is-not (42-5) – which can only be sustained by a dogmatic idealist separation between theory and practice. The purpose of this chapter is twofold: on the one hand, Henry’s excursus on Badiou is intended as an introduction to the area of philosophy to which this book is devoted; on the other, it is to provide novel insights into the practical failures of Badiou’s philosophy. His criticism of Badiou is indeed already implicit in his initial presentation of Badiou’s thought, for which ‘it is impossible to form a truly revolutionary political movement from any position that is connected to forms of knowledge that are themselves connected to the state’ (14). However, Badiou’s attempts to sever the connection between knowledge and the state, specifically through the formulation of a mathematical ontology, leaves the militant with knowledge of their oppression, but in a form which is impossible to deploy in the world. In a phrasing that will be central to Henry’s argument later, Badiou separates epistemology and ontology, whereas epistemology is always-already ontological.

In Chapter 2, Henry compares Badiou’s philosophy with Althusser’s, specifically with respect to their conceptualisations of the event, ideology and the subject. Here Henry shows that, while Badiou idealises the separation between science and ideology, thereby inoculating any form of praxis issuing from his work, Althusser idealises the ‘void’ of chance, making persistence (of ideology, of the state, or of capitalism) literally unimaginable. Otherwise put, his theory is one which ‘prioritises [chance] but which thence can discern no patterns in the chaos’ (82). I have strong doubts regarding the veracity of Henry’s reading of Althusser: the claim that ‘encounters between atoms occur due to shifts in their vectors within the clinamen’ (81) attributes to Althusser a literal belief in Epicurean physics, but such a reading of Althusser is surprising indeed. Henry proceeds by proposing that a suture be made at this point, injecting Hume’s empiricist philosophy to overcome Althusser’s supposed idealism. The critical element of Henry’s analysis is his attempt to show that, like Badiou, Althusser has failed to grasp the true relation between epistemology and ontology: ‘genesis is misunderstood as a principle that determines a relation between knowledge and an object’ (88). Hume’s philosophy restores the organic connection between knowledge and its object, identifying it as one of habit whereby the subject’s access to concepts comes from its constant and inescapable interaction with the external world. Henry astutely recognises that this does not give the subject faultless predictive powers regarding the future – that any estimation it makes of how to engage with the world by means of political resistance will be based on an inference from past experiences (90). If Althusser is right, ‘why should anyone else – or activists for that matter – commit to action in the knowledge that tomorrow everything could change for no reason whatsoever?’ (135) But even if we cannot know what the outcome of our actions will be, we can have enough certainty to get started with them: it is not all just down to chance.

Chapter 3 works to conceal the scar tissue left by Henry’s surgical manoeuvre of grafting Hume’s account of persistence onto Althusser’s political philosophy. This is also framed by Henry as a part of his ongoing effort to abolish idealism in its every form from our thinking about political resistance (124), now by revealing the idealism of Hume’s account of human nature (as habit and inference). Hume’s idealism is overcome by the final of the book’s sutures, that of Deleuze onto Althusser-Hume, although one might rightly wonder what, since the reading of Hume used is one developed by Deleuze (87), would be lost by going directly from Althusser to Deleuze without an intermediary. By the introduction of Deleuze, the fissure separating ontology and epistemology is overcome, since ‘rather than delimiting the extent to which thought can think the world, Deleuze invites individuals to be free through posing and solving problems they find interesting or useful’ (161), thereby rendering the very practice of knowing also a practice of critically intervening upon one’s social and political milieu. This change, from Althusser’s theory of knowledge as the construction of the scientific object of knowledge to Deleuze’s theory of knowledge as a practical manoeuvre meant to guide future action, hangs on Deleuze’s philosophy of individuation. Henry’s reading of Deleuze is for the most part textually convincing; but little is done to justify using Deleuze in the first place. Althusser most certainly does have a theory of persistence, developed in his Sur la Reproduction, originally written between 1968-70. Henry addresses this in passing, commenting that Althusser’s book is ‘sociological, not philosophical, and taking it for philosophy would be to mistake it for the materialist philosophy underpinning Althusser’s social theory’ (82). However, as early as Chapter 1 of Sur la Reproduction Althusser openly rejects the distinction Henry makes between sociology and
philosophy.

Chapter 4 is where I think Henry’s argument is the weakest. He tries to show here that, based on the sutures already performed, only an understanding of political resistance grounded in J.S. Mill’s non- normative concept of ‘genius’ is adequate. This concept is supposed to valorise the attempts of individuals to engage with their political situation in a way that makes the most sense to them, exercising along the way both creativity and openness in their approach. Henry defines it accordingly, as ‘a function that all individuals can express, which facilitates individuals developing both themselves to the best of their ability and an awareness sensitive to social challenges that might occur’ (195). Henry also devotes significant effort in this chapter to proving that Deleuze’s philosophy lends itself best to a utilitarian ethics. I was left with the impression from these passages that ethics, for Henry, amounts only to the centuries-old debates between deontologists and utilitarians. Greater familiarity with contemporary ethics might show Henry that his use of Mill is not at all utilitarian, but is virtue-ethicist, and that Deleuze and moral particularism were practically made for each other. Moral particularism is neither deontological nor utilitarian, but maintains, like Deleuze, that what is good cannot be determined universally or outside of a concrete situation. Indeed, there is something profoundly un-Deleuzian in Henry’s celebration of consequences over principles in ethics (199), whereas a Deleuzian perspective might better maintain the fluidity of their value relative to the demands of a situation. For a Deleuzian, sometimes principles will guide us the right way, and sometimes consequences will.

By the end of the book there remain several unresolved tensions which a further work might attempt to address. Primary among these is the apparent contradiction between Henry’s pioneering project of circumscribing ethical practices of resistance under the auspices of Mill’s ideal of genius, and his non-judgemental attitude toward the plurality of putative practices of resistance. About the latter, he has the following to say: ‘there is no suggestion that Nietzsche’s bird of prey is morally superior to the lamb, and indeed there is no comparison of one against the other. … The bird of prey will be itself, as the lamb will be a lamb’ (213). Should genius be as Henry understands it, does it not thereby negate the view that moral comparisons of individuals are pointless? Certainly, as Henry insists, ‘genius is not a regulative dogma by which to comparatively appraise an individual’s course of action. Rather, genius is an impetus, a necessary corollary to ethical action that demands of individuals that their actions are oriented to actively develop themselves’ (195). Yet within the ambit of genius, it may still make sense to say that, with respect to the particularities of individual lives, some individual has better engaged in ethical political resistance than has another; what Henry’s addition here really requires is that we build greater sensitivity to individual circumstances into our ethical comparative norms. Lastly, should we take such a permissive stance towards political resistance, it becomes difficult to adjudicate between effective and ineffective practices of resistance, only inventive and banal ones. However, such a distinction is imperative to make, and a greater sympathy to Badiou’s philosophy, in which it is a central theme, could certainly help to establish it. In the end, Henry’s highly ambitious work deserves to be praised for all of its novelty, incisiveness and rigour; but the occasional over-zealousness leads Henry to stumble in places as well, leading in the end to an overly-permissive view of political resistance.