Marx & Philosophy Review of BooksReviews‘Learning from the Germans: Race and the Memory of Evil’ by Susan Neiman reviewed by Kevin E Dodson 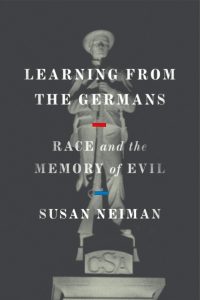 Susan Neiman
Learning from the Germans: Race and the Memory of Evil

Susan Neiman’s latest book is both brilliant and timely. Currently the Director of the Einstein Institute in Berlin and a distinguished Kant scholar, Neiman continues her engagement with the concept of evil that she began in her work Evil in Modern Thought (2002) by examining and comparing two different national responses to a country’s legacy of extreme human oppression – Germany and the United States. However, this is not your typical philosophical treatise; instead, Professor Neiman deftly blends personal recollections, interviews with a wide range of intellectuals and actors, and philosophical reflections on histories that continues to haunt us. By approaching her subject in this way, she has written a significant work of public philosophy that addresses the legacies of anti-Semitism and white supremacy in a philosophical rigorous manner while speaking in a personal voice as a Jewish woman raised in Georgia.

Learning from the Germans is divided into three parts. In Part One (‘German Lessons’), Neiman examines Germany’s Vergangenheitsaufarbeitung, or working off of the past, in response to the Holocaust, a response that transformed Germany into one of Europe’s leading recipient of Muslim refugees in the past decade. In Part Two (‘Southern Discomfort’), she uses her discussion of Germany’s approach to suggest a model for the United States’ own confrontation with its history of slavery and racial terror. This comparative view is a unique contribution. Finally, she concludes in Part Three (‘Setting Things Straight’) by applying the lessons drawn from the first two parts to the issues of memorials and reparations. Given the events of the past four years, from Charlottesville through the Black Lives Matter protests after the police murder of George Floyd and now to the January 6th storming of the Capitol, this book is an invaluable contribution to clear thinking about moving forward on a number of fronts.

Though not intended to be an exhaustive accounting, Neiman identifies five elements that she considers essential to an effective working off of the past. Countries need to construct an accepted national narrative that takes responsibility for past crimes. That national narrative needs to be manifested in symbols and mold the history curriculum in schools. National anthems, official or otherwise, need to be appropriately reconstructed. Finally, a country needs to hold perpetrators accountable and pay reparations to the victims or their descendants. Neiman develops our understanding of these five elements in the many narratives that follow throughout the book.

In West Germany, the initial response to the defeat of Nazi Germany among ordinary citizens was to suppress memories of the past and get on with life. In fact, the generation of West Germans who lived through the war often described Germany itself as a victim, particularly among those whose formative years were spent under Nazi rule. Efforts on the part of the Western allies to confront Germans with the horrors of the Nazi regime and their own complicity in those horrors were often dismissed as ‘victors’ justice’, while any blame was confined to the leadership of the country. Martin Heidegger and Carl Schmitt are both notable in having seen themselves as the true victims. Neiman characterizes this overall response as a ‘great whining’, into which the empirical work of Theodor Adorno and Max Horkheimer on the post-war attitudes of the German populace provided considerable insight. In his seminal work on German guilt, Karl Jaspers fully recognized this resistance to the acceptance of responsibility and effectively addressed it at the intellectual level, though with less than satisfactory practical results. Of course, Vergangensheitaufarbeitung proceeded rather differently in the divided Germany of the immediate post-war era.

Throughout the fifties, former Nazis continued to occupy positions within the West German government under the Chancellorship of Konrad Adenauer. Their children, the sixties generation, pushed the issue into the public eye and asked the critical questions that forced the initiation of the process. The critical breakthrough was the Wehrmacht exhibition organized by Jan Philipp Reemtsma in the eighties. Through its use of the photographs, journals and letters of ordinary soldiers, the exhibition shattered the myth of the Wehrmacht by documenting the complicity of the regular army, and by extension German society, in the atrocities of the war. West German President Richard von Weiszäcker’s declaration that Allied victory was liberation assisted in the reconceptualization of fall of the Nazi regime.

As opponents of the Nazis, Communists were subjected to political persecution and either consigned to concentration camps or forced to flee the country; thus, anti-fascism was encoded in the DNA of the East Germany’s communist regime. De-Nazification was far more robust and extensive in East Germany than that undertaken by the Allies in West Germany with approximately twice as many trials despite the much smaller population, while anti-fascism and the Holocaust were woven into school curriculum. The obvious response here is to challenge the human rights record of the Stalinist regime, which improved over time, but as one of Neiman’s interlocutors points out, Communists pursued a universalistic agenda of equality and solidarity that was perverted, whereas Nazism was committed to genocidal tribalism.

In Part II, Neiman turns her attention to the issue of white supremacy in the United States, not just slavery, but the regime of racial terror by the Klan and other persons and groups as well as the imposition of a form of neo-slavery in the form of the convict-lease system imposed after the dismantling of the legacy of Reconstruction. After the abandonment of Reconstruction, the North, which had won the war on the battlefield, slowly lost it in in the arena of culture, politics and national memory to a neo-Confederate understanding of the American Civil War as ‘the lost cause’, along with efforts to discredit the actual administration of Reconstruction in the South in the form of a neo-Confederate school of history, which W.E.B. Dubois wrote his magisterial Black Reconstruction to refute. This understanding of the war was valorized in the form of Confederate monuments and war memorials throughout the South many decades after the war in the early twentieth century.

Though there has clearly been significant and valuable movement in the elimination of these monuments, we also need a new narrative. In her travels to explore sites involving Emmitt Till, slave dwellings and big houses, and civil rights museums, Neiman takes us on a journey through the Deep South, introducing the reader to James Meredith, community members involved in racial reconciliation and persons devoted to unearthing the physical remnants of life under slavery. Through this process, Neiman constructs an alternative narrative along with indicating its physical instantiation as memorials and museums. As Neiman points out, monuments are values in stone, but also stories in stone, so that the memorials and museums tell a story and valorize elements and actors within that story.

For Part III, Neiman synthesizes the lessons offered in the two preceding parts with a focus on monuments and reparations. In her discussions of the Stumbling Stones of Germany or the National Lynching Memorial in Birmingham, Alabama, Neiman is attentive to the questions of whom and what we memorialize, but also considers how we do so; in particular, she points out the risk of aestheticization of atrocity by making memorials beautiful, however unintentionally. Her approach to reparations is similarly thorough, as she carefully considers objections and mechanisms, coming down against a social democratic approach that emphasizes universal social programs without coming to terms with the unique burdens imposed by historic crimes.

While there may be no final reckoning with the past, our efforts to work it off and achieve a more just society is a continual struggle of preserving the memory of the persecuted against forgetting by some and willful rejection by others. Memory serves as a warning, reminding us of how fragile human existence can be and the dangers that threaten it. However, we thus find ourselves with a program of action in building the institutions and symbols of what is essentially a narrative aiming at emancipation, while dismantling those of the narrative of white supremacy. But this places us within the domain of practical reason and raises from that point of view the question of whether the practical effectiveness of memory so conceived requires that it be situated within the more comprehensive context provided by what used to be called the speculative philosophy of history in analytic circles, namely in this case, that of Kant or Hegel. As Kant understood, we need to discern the possibility of success through our agency. While we can no longer assert that we must make progress, it still remains a need of practical reason that we can make progress. In other words, we need a revitalization of the Enlightenment metanarrative of emancipation.

Susan Neiman’s Learning from the Germans is a rich work of philosophy that combines both rigor and accessibility. She is also a master storyteller as is demonstrated by the many stories she conveys in this work. It is difficult to do full justice to a work like this, so I will only say that I wish more philosophers wrote books like this.