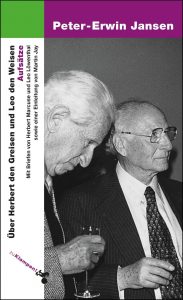 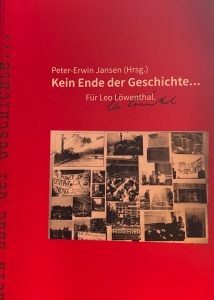 Charles Reitz is emeritus professor of philosophy at Kansas City Kansas Community College. He is …

In Germany Peter-Erwin Jansen has just published two volumes on the lives and the works of two notable philosophical companions from within the Frankfurt School’s founding generation: Leo Löwenthal and Herbert Marcuse. These remarkable figures have long captured Jansen’s interest and empathy. The title of the first volume, a collection of Jansen’s essays, Über Herbert den Greisen und Leo den Weisen could be loosely translated as: Herbert the Senior and Leo the Sage; or even, Herbert Grown Older and Leo Grown Bolder.

These English-language non-equivalents nonetheless attempt to capture something of the author’s emphasis on the gentle humor and friendly irony that always characterized the word play that transpired between Marcuse and Löwenthal. They communicated over the course of forty-five years (1934-1979) in letters in their native tongue. We read early on, for example, that Marcuse refers to Löwenthal (with a play on both Leo and Löwe [lion]) as a dear Beast [Untier] and Löwenthal returns the courtesy by calling Marcuse (who had warts on cheeks and chin) an old Warthog, who had better just wait!

Jansen is a German scholar and charter member of the International Herbert Marcuse Society (IHMS). He highlights the value of the bi-annual conferences organized by the IHMS, where he first presented several of the studies now published in this volume. Years ago Jansen was a student in Frankfurt working with Jürgen Habermas; he is also close to Axel Honneth. He has spent decades examining unpublished materials from the Frankfurt Marcuse archive, and has previously published a six-volume series of Marcuse’s hitherto unknown lectures and papers. He has published several essays on Löwenthal as well, and a volume of Löwenthal’s letters to Siegfried Kracauer. Jansen writes about Marcuse and Löwenthal with an insider’s insight, given his long-standing friendship with the Marcuse and Löwenthal families, who have lived in the US since their exile from Nazi Germany.

Jansen has visited the Marcuse and Löwenthal families frequently in New York City and in California. Suzanne Löwenthal, widow of Leo, has been open and sharing of materials and anecdotes over the course many years. Herbert’s son Peter and grandson Harold have long relied on Jansen, a current resident of Frankfurt, to oversee the holdings of the Frankfurt Marcuse Archive and to assist those visiting it with their research.

The volume currently under review offers a collection of the German-language correspondence between the two fast friends, Herbert and Leo. Jansen adds notes to these letters where needed to elucidate otherwise opaque abbreviated references and add context. Martin Jay’s introduction to the volume develops the genial thesis that the life-long friendship and playful banter between Marcuse and Löwenthal prefigure the very idea of utopia!

Jansen engages Marcuse in detail and at length on technology, fascism and here on the contradictions of utopia:

‘In nearly every one of his writings Marcuse was searching for an alternative concept of utopia – one that could repel any hasty rejection of its supposed utopianism. Marcuse was much too great of a social theorist, with practical political experience, to allow his concept of a societal alternative to be dismissed as utopianism or burdened with the charge of irrationality. He tied his reflections therefore to a concept of reason that was not deformed by instrumentalism, but rather extrapolated from human desires’ (87).

Essays in the volume also examine Löwenthal’s personal intellectual development, his literary criticism and his critical theory. Jansen includes a brief lecture given by Löwenthal on the ongoing relevance of Shakespeare. Because the Bard’s dramatic poetry presents every type of person and gets us to reflect on this diversity in tragedy and comedy, Shakespeare’s works, according to Löwenthal, may be compared in a way to vivid proceedings before a world tribunal where each of us can be the judge. The comedies are recommended especially, Löwenthal emphasizes, not just because they bring us laughter in the current moment, but because they convey a sense of humor for the future – where he says, we are really going to need it.

Jansen’s second book is a 2021 reprint of a 1990 Festschrift he edited in honor of Löwenthal’s ninetieth birthday. This tribute was conceived during and just after the 1989 fall of state socialism in East Germany and the USSR and during the period of the unification of the two former Germanies as a newly unified nation. As per usual, several different commentators on Löwenthal’s work are included. What is unusual is that remarks from nearly each of the contributors occur in conversation with Jansen.

The volume’s title, Not the End of History, indicates that it sees Löwenthal’s intellectual work (and that of others done in his critical spirit) as a challenge to Francis Fukuyama’s ‘end of history’ thesis. This celebrated the (ostensibly) final victory of the neo-capitalist West, and in doing so charmed the mainstream press and the establishment political voices of that time. Jansen’s reprint of these essays now shows that he is legitimately worried that similar historical dynamics are in evidence today, especially during the right-wing political triumphalism of the Trump/Bannon years.

Neo-fascism continues as a growing threat. Jansen and co-authors bring to mind the ‘Historikerstreit’, an academic historians’ dispute in Germany, in which a reactionary re-interpretation of Nazism and World War II, highlighting the plight of German soldiers as ‘A Second Kind of Suffering’ was compared to the misery of the Holocaust. This launched the German version of right-wing culture wars there. Jansen is concerned that the racism and antisemitism this represented would find an echo also in the United States.

Jansen reminds us in an essay of his own of Herbert Marcuse’s ongoing relevance given his ‘critical theory of emancipation’. Jansen quotes Marcuse: ‘That which began as terror in concentration camps has transformed itself into a policy through which men are trained for abnormal circumstances’ (39). This is all the more harrowing after the disclosures of the U.S. military’s use of torture and prisoner abuse at Abu Ghraib and Guantánamo.

Martin Jay’s assessment of Jansen’s work on Marcuse and Löwenthal is that it reminds us of the most pressing problems of our day and the righteous indignation critical theory voices against the unnecessary injustice and pain in the period of later capitalism. The moral edge and revolutionary solidarity of Frankfurt School philosophizing are the crucial sources of its power as ‘a prefiguration of utopia’.