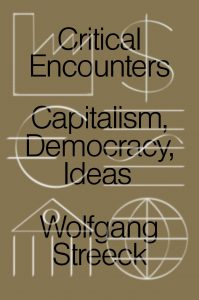 Producing a critical review of a scholarly book is often a daunting prospect, given the responsibility placed on the reviewer to give a fair representation of the author’s work and to find ways to criticise it productively. It is more daunting still when the book under consideration is itself an omnibus collection of critical reviews, and even more challenging when the author is one of the most important voices in debates over the state of modern capitalism. The author in question is the German economic sociologist Wolfgang Streeck, formerly director of the Max Planck Institute for the Study of Societies in Cologne, and the book is Critical Encounters: Democracy, Capitalism, Ideas, a collection of fifteen separate reviews released previously in such publications as New Left Review and the London Review of Books. Perhaps anticipating a review such as this, Streeck prophetically offers some guidance in the introduction on how he approaches the task. Reviewing a book, he says, ‘requires deep reading, beginning usually with the last chapter, then the introduction, then several expeditions into the interior’ (ix). He continues:

‘During reading sessions, I highlight what I find remarkable and sketch my own emerging views in the margins, or on the last pages where the publisher advertises other, often related, books. When I am finished with a book, it looks little deranged. Having let it sit for a while in this condition, I return to it and read my notes. Where they yield a pattern, for example by repeating themselves, is where the reading has left an impact. Then I begin writing.’ (ix-x)

I confess that I tried to follow Streeck’s advice, but I was defeated by the book’s structure. Critical Encounters is not a linear book, and, as Streeck himself recognises, one can read the chapters in any order. Although the reviews are organised into sections under three general themes – capitalism, democracy and ideas – these distinctions are somewhat arbitrary, as all the books under discussion (with the exception of one) are concerned with political economy in the broadest sense: the interaction between spheres of politics and economics and how one comes to dominate the other. In particular, they are concerned with the transformations of the European economies over the past several decades, including the rise of financial capitalism, the advent of the European monetary union, the implementation of so-called ‘austerity’ fiscal policies in the aftermath of the financial crisis of 2007/8, and the decline of traditional modes of worker organisation and party representation. The authors with whom Streeck engages tackle these issues in terms of history (Joshua Freeman, Quinn Slobodian), politics (Yanis Varoufakis, Peter Mair), economics (Martin Sandbu, Mark Blyth) and philosophy (Perry Anderson, Jürgen Habermas). Of course, these categories are far from mutually exclusive, and many of the authors range over diverse terrain. The only book reviewed by Streeck which stands apart from the rest is Charles Darwin’s On the Origin of Species, which nevertheless offers a fascinating insight into Streeck’s own discipline of social science and reflections on how processes of institutional change may be analogous to those of complex biological organisms. The result is that the reader of Critical Encounters comes away armed with an enormous list for future reading. The collection ends with a series of ‘Letters from Europe’, published in the online Spanish journal El Salto between December 2019 and May 2020, just as the coronavirus pandemic was sweeping across Europe.

Although Streeck asserts that Critical Encounters does not offer ‘a “theory” of anything’ (xviii), it does provide a window into Streeck’s thinking on political and economic questions which have come to define the past decade, particularly with regard to German politics and political economy. This is especially true in the choice of books to be reviewed, which have a distinct focus on the transformations of the German economy within the global capitalist system. And almost without exception, they are books that have something to say about the crisis of democratic capitalism in the modern era and the concomitant crisis in political legitimacy. Streeck has elsewhere remarked that this period of multiple crises is an ‘interregnum’ period, to use Antonio Gramsci’s memorable formulation; that is, a period in which ‘the old is dying and the new cannot be born’. During this period ‘a great variety of morbid symptoms can appear’, symptoms such as the rise of populism and reactionary nationalism in both Europe and the United States (Streeck 2018). Following Karl Marx, Streeck thinks of capitalism as a discrete historical phenomenon which has a beginning, a middle and an end. But rather than end with a bang, according to Streeck, capitalism will simply lumber on, refusing obstinately to leave the stage, and blocking any attempt to experiment with new forms of economic organisation.

The real antagonist of Streeck’s writing, however, is not capitalism in either its post-war or neo-liberal formations, but Angela Merkel, who appears time and again as the handmaiden and the enabler of the EU’s integrationist vanguard. This points to Streeck’s strength as an analyst of contemporary German politics and political economy, so central to any understanding of the problems of the European economic union, both structural and contingent. The transformation of the German economy under Gerhard Schröder and then Merkel is the theme which most preoccupies Streeck, and for an outsider to German politics these are the most instructive dimensions of the book. Indeed, Streeck is at his most cutting when writing about authors who get Germany wrong, either in a lack of detail or for falling back on unhelpful stereotypes, such as Germany’s supposed aversion to inflation thanks to mythical Teutonic prudence, and its strong position in the European economy owed to contemporary Germans finally escaping the shadow of Nazism and being allowed to experience national pride once more. Such clichés fall wide of the mark, and do not account for the complex structural forces at work in the modern German economy. One thing is for certain: if the EU is indeed a ‘liberal empire’ with Germany as its core, then Streeck’s analysis is indispensable for any cogent criticism of the bloc. (Indeed, rather than ‘democracy’, ‘capitalism’ and ‘ideas’, the book’s chapters would have perhaps been better organised as ‘German capitalism’, ‘European democracy’ and ‘Anglo-Saxon ideas’.)

The second theme that emerges from Streeck’s reviews is an extension of the first: namely, the project of transforming the rest of Europe into a Greater Germany by means of a monetary union, and the catastrophic failure of the Eurozone. We should not, according to Streeck, ascribe sinister motives to such a project; it was the inevitable outcome of both the disciplining effects of the single currency and the ease with which it has turned the Eurozone into a captive market for German exports. The interplay of the French and German political elites in constructing this regime is interesting insofar as the German project is economic, with an interest in staving off stagnant growth after taking their turn as the ‘sick man of Europe’ at the end of the 1980s, while the French project is political: that is, to use the single market to amplify French geostrategic ambitions. These respective projects found their most natural figureheads in the forms of Emmanuel Macron and Angela Merkel. Any attempts to reform the EU in a more democratic direction – or, more plausibly, to scale down the ambitions and scope of the EU’s competencies, which the pandemic has both provided an opportunity to expand and exposed as severely incapable of meeting structural challenges – must wrestle with these realities of elite politics.

This points to a recurrent mode of analysis in Streeck’s thought – as with any thinker who takes his cues from Marxian social theory, he is much more interested in the structural forces at work in shaping our material reality than with talk of ideologies or individual agents. There are no stringent ideologues at work in politics (or at least very few of them), merely people with economic interests to be advanced. This is a strength of Streeck’s thought – it is refreshing to read an observer of contemporary politics who is not fixated on the personalities of politicians and various palace intrigues, much of which amounts to little more than gossip – as well as a possible weakness. Contingencies and leadership (or the lack of it) do matter in politics, as demonstrated in the book’s most amusing chapter: Streeck’s review of Adults in the Room, the now infamous memoir of the former Greek finance minister Yanis Varoufakis, dealing with the negotiations of the Greek bailout during the Eurozone crisis. On the other hand, given the failure of the Greek government to develop a credible threat to leave the monetary union as a negotiating tool, as well as the punishment meted out to Greece by a concert of EU member-states, including a ‘socialist’ French government and ‘social democratic’ Italians, one sympathises with Streeck’s hesitancy to put much stock in these categories as explanatory factors.

Critical Encounters provides a collection of critical essays remarkably rich in scope and detail, though the selection will be no surprise to those familiar with Streeck’s formidable body of work. However, unlike Streeck’s previous books, this has the advantage of being readily accessible to the reader for whom time is a limited resource; each chapter is short enough to be read independently and provides a prism through which its subject may be viewed. Moreover, each reader can approach Critical Encounters according to their own preferences. I read the book three times: the first time focussing on reviews of books with which I was already familiar and then moving on towards less familiar territory, the second from cover to cover, and the third after having refreshed my memory of Streeck’s two most recent works: Buying Time (2014) and How Will Capitalism End? (2017). Each reader will find their own way, though the most rewarding aspect for this reviewer was gaining insight into works previously unknown, particularly those of Germanophone authors such as Bruno Amable and Helmut Willke. I must dissent from Streeck’s modest claims that book is a ‘mixed bag’, and that there is ‘no need to read it in once piece, from cover to cover’ (xviii), for the cumulative effect is that of acquiring a multi-faceted portrait of the development of capitalist society and its political excrescence over the course of the past century. Our future may be to simply live among the ruins of that undead world.