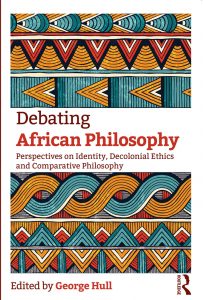 Haythem Guesmi holds a PhD in English from Université de Montréal. His research interests and …

Considering these suggested goals, I approached Hull’s book with a set of hopeful expectations. First, the title suggests an active and multiple engagement with African philosophy and the most urgent debates in African studies in general such as intellectual decolonialization and racial and ethical dimensions of social justice. Second, the description “African” that qualifies and distinguishes the philosophical tradition under study in this recently published volume signifies that North African contributions to African philosophy will eventually be articulated instead of another Eurocentric restrictive attention to sub-Saharan Africa as a monolithic entity and its emphasis on African discourse in English that is largely influenced by Western-trained philosophers. Third, the seminar papers that were turned into chapters in Hull’s edited volume, hosted by the Philosophy Department and the Centre for African Studies at the University of Cape Town and coincident with the events of the Rhodes Must Fall, the protest movement that demanded the removal of Cecil Rhodes’ statue at the University of Cape Town and later the decolonization of education in South Africa, would translate some of the original and transformative energies that characterized that student-led movement. And finally, since the topics under discussion have been well explored in recent years, I hoped that Debating African Philosophy would suggest new contributions to the field.

Hull outlines in his introduction the common threads that unite the various contributions together, namely the decolonization of the discipline of philosophy in Africa, the marginalization of African philosophical problems in Western discourse, the importance of indigenous African knowledges and languages, and the interconnections between racial, ethnic, linguistic identities and social justice in modern African philosophy.

The debate on the nature of African philosophy and the importance of intellectual decolonization occupies a center stage. Bruce B. Janz’s important chapter for instance argues against the standard use of mainstream Western philosophy and advocates instead for a reimagination of an African philosophy that asks questions, makes new concepts, dares itself to take new paths. Oritsegbubemi A. Oyowe sees the place of the university in African philosophy as a regulative idea that ensures inclusivity beyond race, gender, and ethnicity and also as playing a vital role in African liberation politics. In the book’s first part on decolonizing philosophy, Robert Bernasconi argues that contemporary scholars should elevate to a canonical status the work of such African philosophers as Ottobah Cugoano, the 18th-century West Africa-born former slave and writer, as a decolonizing gesture that addresses the moral question of slavery and the willingness of canonical philosophers like Immanuel Kant and John Locke to defend slavery in Africa. Mogobe Ramose in the third chapter insists on the role of the memory of past wrongs to redress the epistemic injustice by decolonizing African philosophy and empowering social and epistemic justice. Rebecca Bamford applies these concerns to the field of biomedical ethics to further support the case of decolonizing bioethics and challenge its ‘moral neocolonialism’ (44) that continues to harm African people.

Moral debates take up much of the most engaging discussions on the method of African philosophy. Thaddeus Metz conceptualizes an African ethic on the issue of survivor’s guilt by questioning Western moral theories of utilitarianism and Kantianism and its judgement of exhibiting this kind of guilt as unreasonable. He claims instead that in Sub-Saharan Africa “to feel bad in these situations is reasonable insofar as it is an emotional expression of a person being bound up with, and committed to, other persons.” (161) Responding to Metz’s philosophical reconstruction, Tom P. S. Angier criticizes Metz method for being selective about the content of the African ethical folk beliefs, with an overwhelming emphasis on ubuntu whose construction is closely linked to Western liberal values of egalitarianism and individualism. Instead, Angier suggests a more adequate reconstruction of a distinctively African ethic that is both ‘truer to the cultural and philosophical resources of Africa’ (207) and builds on such values as seeing the ethical being infused with the aesthetic, affirming value and dignity in poverty, and safeguarding human life. Edwin Etieyibo further reconsiders African ethics and specifically the question of the moral status of nonhuman nature by arguing that, against claims of anthropocentrism, African philosophy is more engaged with biocentrism or ecocentrism and that in African metaphysical worldviews “intrinsic value is not human centred but is either the individual beings or the community or beings in community” (164). The challenge against homogenizing stereotypes about method in African philosophy is also discussed in Dorothea Gädeke’s chapter when she explores converging relational features of normative thought in the southern African philosophy of ubuntu (based on Ramose’s and Metz’s accounts) and on Neo-republicanism as developed by Philip Pettit to argue that relationships, rather than individuals or communities, are the relevant subject matter of normative thought in both traditions. On cultural universals and particulars in African philosophical accounts of morality, Uchenna Okeja revisits this topic by re-examining Kwasi Wiredu’s claim about sympathetic impartiality and the insufficiency of his response to Odera Oruka critique of his view. Okeja supports a stronger version Oruka’s discussion to argue that sympathetic impartiality is a principle, rather than a fundamental and biological human presupposition, of morality.

Several contributions have paid particular attention to the role of decolonization as a method within African philosophy and African liberation movements to highlight the issues of race, justice, and identity. In the book’s second part, Hull discusses how the non-racialism of the Unity Movement, South Africa’s anti-apartheid political organization, and their dismissal of the categories of race and nation illuminate new approaches to demands of liberation and justice. The following two chapters discuss the importance of the interconnections between intellectual decolonization and racial and political justice in the theory of the South African anti-apartheid activist Steve Biko. Brian Epstein argues that Biko “aims to show how we can transform an existing set of oppressive social categories in the world into new social categories.” (98) Sergio Alloggio and Mbongisi Dyantyi’s chapter and Barney Pityana’s postscript expand the engagement with Biko’s writings through a discussion of its connections with the work of the French poststructuralist philosopher Jean-François Lyotard on the “discursive wrong” imposed upon Black people and activism under apartheid and the extent to which discourse can be a decolonizing force. Racial inequality is also explored in Samantha Vice’s concluding chapter on impartiality and partiality in terms of moral demands of restitution and redistribution in post-apartheid South Africa and its inevitable failure because of the lack of a strong institutional support.

Debating African Philosophy succeeds in covering a large array of themes, methods, and articulations in contemporary African philosophy. The multidisciplinary discussions on such topics as racism, ethics, cultural universals, and language further our understanding of the depth and rich traditions of African philosophy and its openness to other traditions. Also, contributions in Hull’s book are standalone chapters that would work well in undergraduate and graduate courses on African philosophy whether in Africa or abroad. Indeed, the inclusion of critical analyses and comparative perspectives from international scholars is a welcome addition in the book.

After reading Hull’s volume, a familiar disappointment sets in. It remains unclear, and even disregarded, what motivates the emphasis on Africa in the volume’s title. Most of the theory and concepts that are discussed in the book are closely linked to debates within South Africa. Africa is often presented as a monolithic space, either to claim the presence of salient features across the continent or to frame it in opposition to the West. While Hull acknowledges that “what is new” about the call for intellectual decolonization is a palpable mood of soul-searching and self-criticism in parts of the North American and European philosophical establishments” (3), it remains unclear how his volume contributes to a different approach to this lingering issue since most contributions reflect a limited and essentialist view of African philosophy that centers those who specialize in sub-Saharan African philosophy in English. Another notable absence is the role of African philosophy not only in the process of decolonizing itself but also in decolonizing the African university, especially that the book coincided with the radical and transformative events of Rhodes Must Fall and therefore a timely engagement with such a relevant topic would have benefitted readers and activists.

As many contributed in Debating African Philosophy have argued, a relevant and vibrant African philosophy needs to be theorized and practiced in relation to the social, cultural, and political demands and objectives of its individuals and communities, but also, I want to add, in relation to urgent topics such as science and technology, African Marxism, and revolution. All in all, it is testament to the growing scholarship in African philosophy that, while it does not engage with these debates, Hume’s volume covers a wide array of traditions and themes and invites scholars, researchers and readers to reconsider new and significant articulations in contemporary philosophy in English-speaking Africa.