Marx & Philosophy Review of BooksReviews‘Dialectics of Revolution: Hegel, Marxism, and Its Critics through a Lens of Race, Class, Gender, and Colonialism’ by Kevin Anderson reviewed by Yağmur Ali Coşkun 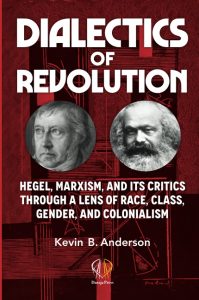 Kevin Anderson
Dialectics of Revolution: Hegel, Marxism, and Its Critics through a Lens of Race, Class, Gender, and Colonialism

Yağmur Ali Coşkun is a teacher, labor and immigrant rights activist, and author. He currently …

Kevin Anderson’s latest book is a staunch, comprehensive and accessible defense of dialectics. With the rise of popular and revolutionary upsurges in the last decade, a renewed interest in Marxism has been going on hand in hand with the lack of guiding material for dialectics, a vital component of Marxism. Anderson’s Dialectics of Revolution constitutes an important step towards filling this gap.

The reader should be warned, however, that they will encounter uneven and sometimes repetitive treatments of certain themes, sometimes even the same quotes from certain authors (Dunayevskaya, Goldmann and, of course, Hegel and Marx). Given that the book consists of a collection of articles spanning across four decades, this unevenness is understandable, though it does undercut some points Anderson makes.

In a brief introduction, Anderson claims that he shall attempt not only to excavate dialectics as a ‘key to understanding Marxism’, but also ‘to its rethinking’ (3). Accordingly, the essays in the book are grouped under two headings: ‘Marxism and Hegel’ and ‘Dialectics Today’. A polemic against the dialectic’s critics and non-dialectical Marxist thinkers (most notably Bukharin) underlies both sections.

The essays grouped under ‘Marxism and Hegel’ both clarify dialectics as developed by Hegel and Marx – the very first essay in this section, ‘Dialectics in Brief’ (13-20), is an encyclopedic entry penned for this purpose – and engage with authors in the Marxist tradition who have contributed to this method. Especially Lenin, Marcuse and Lukács are each treated at essay-length, while Dunayevskaya appears prominently as an intellectual guide. Furthermore, Anderson has chosen to engage with the less popular, sometimes obscure works of these authors (Philosophical Notebooks, Reason and Revolution and The Young Hegel, respectively) instead of re-working on already well-known works.

Basing himself on the ‘concrete’ negation between ‘real social forces, as well as ideas’ (13-14) from which the Hegelian dialectic flows, Anderson makes the convincing case that the dialectical method was already grounded in the flow of human history in Hegel. Whether it is the conflict of the ‘master and slave’ in Ancient Greece (14) or the ‘highly abstract, dehumanized form that the spirit takes […] during absolute Freedom and Terror’ (25), the categories of the dialectic express real human conflicts and yearning for ‘absolute liberation’, though in an abstract way that is confined to consciousness. Marx, in his turn, attacks this privileging of ‘consciousness […] over the fullness of human praxis’ (15), while retaining the core concepts and workings of the dialectic. Viewed this way, the dialectic and its final aim, absolute liberation or communism, emerges not only as a method with which to analyze history, but the very pulse of history itself.

Anderson himself gives fine examples of dialectical criticism by assessing relative strengths and weaknesses of various works. For instance, he stresses the originality of Marcuse’s Reason and Revolution as the ‘first systematic published analysis of Hegel’s major works from a Marxist standpoint’ (85) and the work’s ‘radical conception of the Subject’ (87). At the same time, however, he criticizes Marcuse’s undialectical pessimism in the latter’s 1960 preface, where Marcuse declares: ‘the power of negative thinking is condemned’ (102). For Anderson, Marcuse himself couldn’t draw the ultimate conclusion from engaging with Hegel in Reason and Revolution. Falling short of engaging with the Hegelian absolutes, Marcuse was led to extreme pessimism on the one hand, and imposing a ‘Great Refusal’ as a guiding principle in an abstract, Kantian manner on the other (101, 106, 184). It is precisely when all contradictions seem to be resolved in the Absolute (for Marcuse, total technocratic control) that, in the words of Dunayevskaya, ‘the lifeblood of the dialectic – absolute negativity – pour[s] in’ (113) and opens new departures. Dunayevskaya, on the other hand, saw not only points of departure within the post-World War II world order, but also identified concrete, potentially revolutionary subjects who would break that order apart.

The second part of the book takes on a polemical tone, since it engages with the critics of dialectics head-on. While pseudo-biological (Dawkins & co.), structuralist (Bourdieu) and pragmatist (Dewey and Rorty) criticisms from the right and the liberal center are briefly taken on (156-162), Anderson’s main focus is poststructuralist critiques from the left. In his view, the poststructuralist left took on the task of ‘preserv[ing] leftwing thought in the face of neoliberal hegemony’ (218). However, it did so at the expense of giving up on the goal of emancipation, and over-emphasizing the theme of ‘resistance’ instead.

Particularly interesting are his defenses of dialectics against Derrida. Anderson vehemently opposes Derrida’s hollowing out of anti-capitalism by rejecting Marx’s ‘historico-dialectical analysis’ (175). For Marx, aspects of capitalism that Derrida critiques, such as the fetish-character of the commodity, are of a specifically capitalist social formation. Further, they create not only alienation and misery, but also ‘subjective yearnings for freedom on the part of the oppressed’ (76). Derrida opposes these aspects only by trans-historicizing them to a level of ontological conditions without an objective, ‘rational basis’. As such, Derrida’s critiques ‘amount to nothing more than an attempted exorcism of the fetish’ (174). Thus, Anderson finds another occasion to emphasize the tight connection between Marxism’s revolutionary goals and its dialectical core.

Despite his keen observances and explications of the dialectic, however, Anderson mentions that other famous dictum of Marxism, materialism, only cursorily and dismissively. Without citing much textual evidence, and forgoing entire works – The German Ideology or The Holy Family – that would contradict his view, Anderson declares that Marxism consists of a ‘mixture’ of idealism and materialism, and uses this unfounded Dunayevskaya-esque belief as a yardstick to measure all major Marxists from Engels onward. His sole engagement with these authors’ materialism is only to dismiss it as ‘vulgar’. Accordingly, Lenin’s call for a ‘militant materialism’ is summarily dismissed (64), and he is reproached for not pursuing the alleged ‘unity of materialism and idealism’ (45).

This criticism is all the more strange given Anderson’s meticulous analysis Lenin’s reading of Hegel and the connection between his dialectical studies and his stance on the wars of national liberation (53). Further, Anderson rightly contrasts Lenin’s (and Gramsci’s) dialectical standpoint with Bukharin’s mechanistic materialism (63-64). Lenin’s strategy of the vanguard party, itself based on a meticulous materialist analysis of the Russian and world proletarian movement, is struck out without any meaningful engagement or offering any alternative (79). One feels that Anderson rejects Lenin the materialist-strategist to make room for Lenin the Hegel scholar.

Anderson’s extremely selective reading of Marxists and his idea of Marxism as a ‘mixture’ of idealism and materialism, severely limits his strongest points. At an epistemological level, he inadvertently reintroduces dualisms (subjectivity – objectivity, active engagement – passive materiality) that Marx and his followers have sought to overcome through a materialist critique of idealist dialectics. Anderson interprets the famous first thesis on Feuerbach in a non-dialectical fashion, as a simple counterposing of ‘active’ idealism versus ‘passive’ materialism. He selectively quotes the thesis’s praising of idealism having developed the ‘active’ side of human experience, leaving out the part where Marx condemns this conception of activity as abstract and non-sensuous (15). Thus, he ipso facto assigns subjectivity, activity and liberation to idealism; and objectivity, passivity and oppression to materialism. Anderson cannot conceive a materialist conception of an active subject rising out of the objective conditions of the given world; this theory would entail a critical, materialist and conflict-ridden relationship with Hegel, not a simple ‘mixture’. Anderson never once engages with authors who have tackled precisely this problem (Ilyenkov, Badiou, Timpanaro, etc.).

At an empirical level, Anderson’s understanding of materialism leads him on occasion to substitute concrete analysis with schematism. Embracing Hegel (via Lukács) nearly uncritically, Anderson announces that the ‘relationship between brothers and sisters […] remains one of the most equal relationships between men and women’ (144), without citing a single piece of evidence to support this claim. As there are still societies where brothers kill their sisters at the command of their parents in the name of protecting family honor, the argument is hardly convincing. Likewise, his almost verbatim acceptance of Hegel’s criticism of the French Revolution as an imposition of an abstract ‘general will’ (24-25) allows Anderson to see the same scenario acted out in all successful revolutions from Russia to Grenada (32), on occasion adding Nazi Germany in the mix (191).

At a political level, Anderson’s shying away from materialism undercuts his own boldest and strongest claim: that Marxism provides a dialectical unity of an increasingly universal wage labor, with the capital relation at the highest level of abstraction and more particular struggles around racial, national and gender oppression in more concrete instances (202-205). This claim is based solidly on textual evidence from Marx and Engels’s correspondence, polemics in the First International, and Marx’s non-published studies on primitive-communist societies. However, a reluctance to engage with the material conditions and configurations of the forces of capital and those ‘subjects’ who would oppose it prevents Anderson from advancing any strategic positions.

Without a strategic, unifying perspective, all revolutionary subjects Anderson notes remain in a loose conjunction, without any clear path towards unity beyond individual grievances against this or that aspect of capitalism. As such, Anderson himself deserves the very criticism he directs against Deleuze and Cohn-Bendit: ‘How the various spheres of the Left […] could eventually come together with enough force to challenge the rule of capital is probably not advanced by such formulation’ (160).

The title of Anderson’s book promises theoretico-logical edification (‘dialectics’) directly tied to strategic orientation (‘of revolution’), but ends up delivering clearly only the first half. As such, Dialectics of Revolution is a masterful and clear study on dialectics, and a great guide for students of this vital component of Marxism. However, if the reader expects any political-strategic insights, their hopes will be frustrated.