Marx & Philosophy Review of BooksReviews‘How We Cooperate: A Theory of Kantian Optimization’ by John E Roemer reviewed by Martina Valković 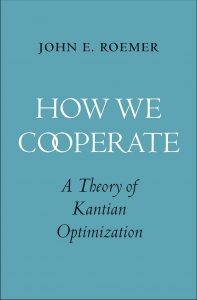 John E Roemer
How We Cooperate: A Theory of Kantian Optimization

Martina Valković is a Research Assistant and a doctoral candidate at Leibniz University Hannover, …

Working together is arguably the defining feature of human sociality and the condicio sine qua non of human societies. Simply put, without cooperating people would be unable to live together, communicate, trade or indeed, in most contexts most of the time, survive. A brief look at humans in their environment, at any historical period and anywhere in the world, seems sufficient to establish this simple truth. Nevertheless, economists, including game theorists, often seem either oblivious to this fact, or unwilling or unable to give it a proper treatment. Their focus has overwhelmingly been on competition rather than cooperation, on situations where there is a conflict of interest between agents rather than its congruence, and the prevailing image of human agents, accordingly, has been that of homo economicus, rational, self-interested and working alone.

Roemer’s How We Cooperate, as the title suggests, is an outlier. The main trigger behind the work is Roemer’s recognition that economists have largely neglected cooperation in favour of competition, even though humans are a ‘cooperative species’, meaning that we largely cooperate because we understand the value of doing so, rather than because we are afraid of sanctions. And, indeed, this includes cooperation in great many economic contexts, by which we achieve better results than through competition (think of taxation or public goods provision). Roemer considers it fairly obvious that cooperation, in our everyday use of the word, does not exist in economic theory, nor does anything that could count as social action. Therefore, he concludes that general equilibrium and game theory are not designed to deal with the distinct human ability to cooperate, and proposes an alternative to the standard Nash optimisation in the form of Kantian optimisation.

For Roemer, to cooperate simply means to work together towards a goal, without assuming that individuals care about each other – cooperation could just be a way to satisfy one’s self-interested preferences (4). The necessary conditions for cooperation are solidarity and trust, which is established by observing others taking cooperative action, or by the knowledge of them having taken it in the past. Solidarity, on the other hand, is a union of purpose, sympathies or interests among group members. That is, it is a characterisation of the individuals’ objective situation: that they are all in the same proverbial boat and understand that fact. This does not mean, however, that they are altruistic toward each other.

Roemer’s claim is that the ability to cooperate for reasons of self-interest is less demanding than the prescription to care about others, and that it is easier to explain the many examples of human cooperation by assuming that people are aware that cooperation can further their interests rather than by assuming that they are altruistic. His key point is that ‘extensive’ cooperation can be undertaken because it is in the interest of each agent, not because each agent cares about others. Roemer is sceptical about the possibility of humans having deep concern for strangers on a mass scale, and deems this psychological capacity for altruism a risky base for humanitarian projects. On the other hand, he believes that humans generally have common interests, and that it is natural to pursue these cooperatively. This suggests that the safer strategy in general is to rely on the motive of self-interest, rather than love for others. Roemer’s approach, thus, contrasts with some influential views on cooperation (e.g. Bowles and Gintis (2011), de Waal (2016)) that emphasise the role of altruistic inclinations.

At those rare times when they did discuss cooperation, Roemer writes, economists did so in two different ways, both of which he deems inadequate. First, some game theorists tried to model cooperative behaviour as the Nash equilibrium of a multistage game, a move that Roemer finds unconvincing. He deems this equilibrium in which cooperation is maintained by a chain of punishments too fragile to explain ‘the real thing’, and takes the explanation to be a Ptolemaic effort to fit an observed phenomenon into a theory that cannot simply account for it. Second, some behavioural economists attempted to tackle the issue by replacing self-regarding preferences with ‘more exotic’ (in Roemer’s words) ones, spanning from the concern for fairness or for the welfare of others to ‘seeking a warm glow’, while still relying on the Nash equilibrium as their main tool. Roemer rejects these approaches as ‘too easy’, in the sense of being impossible to falsify, in addition to only producing the cooperative Nash equilibria in very simple problems (those with only a few strategies and an obvious cooperative strategy). Roemer argues against the idea that cooperation is usually achieved in a way that is best modelled as the Nash equilibrium of a game, no matter whether the preferences are standard self-regarding ones or not. This is because in a Nash equilibrium one treats other players’ actions as a part of her environment, asking herself something like ‘Taking the actions of others as fixed, what is the best action for me to perform?’. Instead, Roemer believes that a model of cooperation should show how each individual in the group contemplates on how others will coordinate with her, meaning that those others have to be viewed not as a passive part of the environment but rather as a part of the action itself, which in turn means that optimisation must be done in a non-Nash way. Enter Kantian optimisation.

Kantian optimisation is the main idea of the work and its main original contribution. In simple symmetric games, a Kantian optimiser in a cooperative situation asks herself something of the sort, ‘What is the strategy I would like all of us to play?’. Against the objection of irrationality of this sort of optimisation, Roemer counters that it is difficult to judge a kind of behaviour irrational if the results for agents are better than they would have been otherwise. Roemer terms this optimisation Kantian because it ‘seems like a natural interpretation of Immanuel Kant’s categorical or hypothetical imperative: take those actions that you would will be universalised’ (viii). However, it needs to be pointed out (as Roemer does in a footnote) that the label ‘Kantian’ should not be taken to imply that there is a deeper Kantian justification of Roemer’s idea.

In chapter thirteen, Roemer applies his Kantian optimisation into designs for market socialism. His proposals are motivated by observation that ‘the ethos of socialism is cooperation’ (178), and that models of market socialism that he is familiar with limit the socialist part of their proposals to changes in the property rights in firms, making the income distribution more equal than it is in capitalist economies. Roemer goes on to claim that these market-socialist models pay only lip service to cooperation, while not including any cooperative protocol in the agents’ behaviour. Roemer believes that this approach ‘underplays the importance of the cooperative ethos that must be a key element of socialist design’, and considers the lack of cooperative behavioural protocol to be ‘a serious lacuna, since the theory of socialism emphasises that socialism will replace the ethos of individualism, characteristic of capitalism, with an ethos of cooperation’. Cooperation should, therefore, ‘appear more robustly in our models of socialism and not be limited to a new design of property rights’ (179). Here, Roemer aims to do so by embedding cooperation in the form of Kantian optimising into two models of market socialism, the first of which considers profit-maximising firms (partly citizen- and partly state-owned) in which citizens provide their labour to firms in a Kantian manner, while the second introduces Kantian optimisation in citizens’ investment decisions but not on the labour market. Roemer points out that, unlike previous market-socialist models, his relies on the income taxation as means of equalising income, rather than on equality in the distribution of profit shares in the population, making his model a conceptualisation of a social democratic version of socialism, instead of a Marxist one (206).

Even though the book is generally written in a clear and accessible style, large sections of it (e.g. in chapters three to five and eleven to twelve) are not suitable for non-specialists in economic or game theory. It also needs to be remembered that Roemer’s position is less radical than it might initially appear – maybe unsurprisingly for an economist, he retains belief in the overall primacy of self-interest over concern for others, and his view on solidarity may not completely overlap with what we typically mean by the term. Nevertheless, his is an important and original contribution. Its central topic, cooperation in economic contexts, is usually treated with neglect, and putting it in focus is therefore always a welcome move. Equally welcome is Roemer’s bypassing of altruism in favour of solidarity, another notion that has yet to receive much attention recently.

Furthermore, Roemer introduces a new way of optimising in games that provides an alternative to the standard Nash optimisation, and thereby makes possible a novel view on cooperation in these contexts. Instead of taking Nash optimisation as the only rational way to optimise in a game, and constructing various multi-stage games to explain cooperation, Roemer reconceptualises optimisation itself as a cooperative endeavour, while remaining firmly grounded in the tradition of methodological individualism. His model of cooperative equilibrium can help emphasise the significance of cooperation in economic situations and dethrone competition from the privileged position it currently occupies. Combined with the insight that altruism can be replaced by solidarity as a basis of cooperation, this work promotes a currently underrepresented angle on cooperation. It will be useful to those interested in economy, sociology, philosophy, and more generally to anyone interested in how we work together, and why it may not be irrational to do so. After all, as Roemer reminds us, we must all hang together or we will certainly all hang separately.