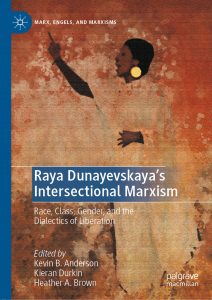 Raya Dunayevskaya is one of the most underappreciated Marxist writers of the last century and this book seeks to redress the imbalance through a series of essays covering her contributions to areas announced in its subtitle: Race, Class, Gender, and the Dialectics of Liberation. Raya Dunayevskaya’s Intersectional Marxism succeeds remarkably well in making her thought insistently relevant in the drawing of road maps for the future of the intellectual left.

Part 1 dives into the deep end with three essays setting out her understanding of Hegel’s Absolute as a philosophical gateway to liberatory political struggle. She hears ringing in the Absolute a death knoll to prescriptive, totalizing teleologies of the traditional Marxist kind; just as resolutely, she embraces the contingent nature of revolutionary events. What will happen the day after the revolution, she accedes, is something that no one could know (41). In the negation of the negation she finds a theory of the human subject’s freedom to challenge the ascendancy of capitalism. The enthusiasm with which she reads the last chapter of the Science of Logic is clear in the second chapter of her The Power of Negativity: Selected Writings on the Dialectic in Hegel and Marx (Dunayevskaya, 2002). What she finds in Hegel’s dialectic is the dynamism of thought and its constant ability, as she puts it, to come into ‘head on collision with its opposite’ and develop anew; ‘Hegel’s LOGIC moves’(144).   Situating her reading as a political intervention in the American left is the concern of Part 1’s concluding essay by Peter Hudis. In the 1950s, Dunayevskaya was collaborating with C.L.R. James and Grace Lee to break the stasis induced by Stalinism. They sought to reinvigorate the notion of class by positioning it as a subjective force capable of engaging with racial and gender contradictions within the working class. Dunayevskaya’s particular Hegelian turn, analogous to Lenin’s immersion in the Science of Logic after the catastrophic embrace of nationalism by the German Social Democratic Party in 1914, came with her translating into English Lenin’s Hegel Notebooks and parts of Marx’s Economic and Philosophical Manuscripts. She was able to marry abstruse philosophy with a revolutionary humanism, seeing negation as the space for political action by groups of workers, women and blacks whose cognitive and affective scope for change cannot be solely configured by the term class consciousness. Her conviction that a matrix of factors accounts for a revolutionary potential, says Hudis, is a characteristic of her writings from the 1960s to the late 1980s.

Part 11, ‘Gender, Race, and Revolution’, looks more closely at such a range of ideas,, beginning with a chapter from a book by Adrienne Rich, Arts of the Possible (Rich 2002). Rich draws attention to the way Dunayevskaya admired Rosa Luxemburg while also lamenting her failure to recognise the revolutionary capacity of people of colour. Similarly, Luxemburg was seen as downplaying the importance of women’s struggles because of the priority she accorded to economic class conflicts. Dunayevskaya looks to oppressed groups like women and black Americans in the light of Marx’s accounts of how relationships are transformed through struggle. Far from being contained by the notion of a young Marx who advances beyond it in his later writings, she sees the humanism of the Economic and Philosophical Manuscripts as central to the enduring importance of the revolutionary subject, the agent of change who challenges the status quo.

Lilia D. Monzó’s essay instructively connects Dunayevskaya’s perspective with Marx’s remark in a letter about how the capitalist class knowingly benefits from the mutual distrust between English and Irish workers, comparing it to the racial hostility of ‘poor whites’ towards blacks in the southern states of the US (165) Emulating the attention Marx gave to the Civil War in the US, Dunayevskaya attends to social fractures of her own time affecting women and blacks; Monzó, updating this point of view with contemporary references, mentions how the Black Lives Matter movement touches on the mistreatment of other identities, like those of LGBTQ. Addressing the tension between organization and spontaneity in such struggles, she looks to Dunayevskaya as a teacher of the need to unite philosophical theory with political action. It is, she says, not just a question of the ownership of the means of production but also ‘the social relations that define gender relations, race relations, and ultimately, all human relations’ (152).

The third part, ‘Connections and Debates’, draws out the wider landscape for positioning and appreciating the reach and value of Dunayevskaya’s heterodox thought. Paul Mason points to the flawed teleology that invested working-class struggle with an inevitable drive towards overthrowing capitalism. It went hand-in-hand with a crude valorizing of economic determinism, a prioritizing that has faltered in the face of neoliberalism’s battery of means for corralling labour. Social existence, quite apart from the effects of coerciveness in the workplace, is becoming increasingly commodified and atomized; ideologically subjected, instances Mason, to mobile digital devices ‘which three billion people on the planet now possess, and which barely existed on the day Lehman Brothers went bust’ (202). Resuscitating the humanist heart of Marxism becomes a rescue mission when subjectivity’s colonization by capital layers itself ever deeper. A Marxism that speaks of liberation – of the self and of earth’s ecosystem – needs to be articulated and Mason finds this in Dunayevskaya’s ability to network apparently disparate areas of personal and public experience.

Dunayevskaya may not have been marginalized in histories of twentieth-century Marxism, but she remains a relatively unknown figure. This makes welcome a sketch by David Black of Dunayevskaya’s trip to Europe after the publication of her Marxism and Freedom (Dunayevskaya 1958). She boards a boat for Genoa and studies Hegel on the deck; meets with and addresses the Italian left in Milan; travels on to London. She seeks to make contact with as many radicals as she can in Britain, attending meetings in Glasgow organized by Harry McShane and, in London, talking at a meeting organized by the editors of the emerging New Left Review. The editors are less than enthusiastic and she is equally unimpressed by them as an ‘elite’ who ‘almost boycotted the event’ (247).

The final section of the book looks at the theme of liberation that so distinguishes her writings, opening with Paul Mason putting in another appearance by way of an article he wrote for the New Statesman in 2018. It kicks off from a 1937 photograph of Trotsky, Frida Kahlo and Dunayevskaya (she was Trotsky’s secretary for over a year, until the Molotov-Ribbentrop pact divided their opinions of what the USSR had become), but its journalistic tone and content culminates by associating Dunayevskaya with a clarion call more befitting an Height-Asbury hippy – ‘Fuck the vanguard party. The revolutionary subject is the self’– than a Marxist activist and thinker, a woman who was the first to translate into English parts of Economic and Philosophical Manuscripts of 1844.

The remaining three contributions, looking in more detail at Marxism and Freedom, make clear Dunayevskaya’s concern – contra what would be asserted by Althusser – to separate Marx’s emancipatory concerns in the Economic and Philosophical Manuscripts from traditional liberal humanism. The needs of the sensuous individual are not to be seen through the optics of human rights but as arising within the exploitative nature of capitalism and its wasting of people’s lives. Alienation, not as a philosophical conceit but a material reality grounded in the disciplining of labour, is seen as foundational for both the early and late Marx. The alienation that Marx writes about in 1844 becomes the fetish-character of the commodity of Capital and Dunayevskaya refers to a passage in the third volume of Capital where the reification of social relations that is highlighted in the Economic and Philosophical Manuscripts is explicitly reformulated in economic terms: ‘The way in which surplus value is transformed into profit via the rate of profit is but a continued development of the perversion of subject and object taking place in the process of production’ (291).

The penultimate essay, by Kieran Durkin, in Raya Dunayevskaya’s Intersectional Marxism is particularly helpful to readers unacquainted with Marxism and Freedom and the arguments and political positions that she developed and found validation for in Marx. Discussing the 1957 school desegregation conflict in Little Rock, Arkansas and the Montgomery bus boycott in 1956, she looks to the importance Marx attached to campaigns for the eight-hour day and the Abolitionist movement in the United States; the bonding of racial and labour issues becomes for Dunayevskaya as vital as it was for Marx and she quotes his observation in the first volume of Capital that ‘labour with a white skin cannot emancipate itself where labour with a black skin is branded’ (302). Dunayevskaya would come to look at anti-colonial struggles in Africa and the women’s movement in the 1960s with a similar wide-angle lens that sees a hegemony of class, race, gender and sexuality framing the need for acts of liberation at both a societal and individual levels.

Marxism and Freedom is also at the heart of this collection’s final essay, by Kevin Anderson, and he makes a convincing case for regarding it as Dunayevskaya’s most important book and the one most relevant to the political challenges of current times. She points the way to an affirmative place that does not exist as yet but, uncertainties and risks notwithstanding, does not escape the space of the reachable.