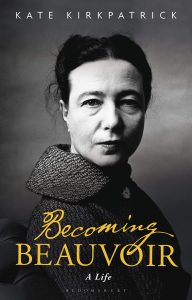 Thomas J. Mann is a PhD Candidate at the Johns Hopkins University. He is currently writing a …

There are few philosophers of the twentieth century more well-known, and who have a more complex legacy, than Simone de Beauvoir. Her own work, which conformed to few disciplinary boundaries, has been praised and reviled, eclipsed and rediscovered. She wrote great works of fiction such as She Came to Stay and the Prix Goncourt-winning The Mandarins. Her greatest achievement, The Second Sex, remains an unavoidable touchstone for anyone interested in the lives, experiences and the formation of women and contemporary feminism. Beauvoir also wrote on the difficulties and social perils of ageing in her late philosophical tome translated as The Coming of Age. And, of course, she wrote thousands of pages of memoir. Her life has already been the subject of some exhaustive intellectual-personal biographies, most notably Dierdre Bair’s Simone de Beauvoir: A Biography and Toril Moi’s Simone de Beauvoir: The Making of an Intellectual Woman. Combined, it makes for an intimidating reading list.

We may justly wonder, then, whether another long book on Beauvoir’s life is appropriate. Kate Kirkpatrick is well aware of the risk of superfluity. Much of what Kirkpatrick hopes to bring to the new biography synthesizes some of the letters and diaries which have only been recently published for readers, among them Beauvoir’s allegedly scandalous letters to Nelson Algren and Claude Lanzmann. As Kirkpatrick argues, ‘this new material shows that Beauvoir omitted a great deal from her memoirs – but it also shows some of the reasons behind her omissions’ (9). If the new details from these sources reveal anything, it must be said, they are not much of an aid in understanding her as a thinker. Indeed, it would be understandable if the reader of Becoming Beauvoir became rather impatient with the flood of friends and lovers who arrive on and leave the scene, make little intellectual or personal contribution, and are almost never heard from again.

Dierdre Bair said that she ‘found it impossible to write about Beauvoir without referring to Sartre on almost every page from the time they met until her death in 1986 (not his in 1980)’ (18). Kirkpatrick takes a different route. She insists that ‘evaluating Beauvoir’s life seem[s] to require the forcible displacement of Sartre from the centre’ (8). Sartre therefore fades in and out of Kirkpatrick’s narrative, and usually emerges because he was having another obnoxious affair or becoming addicted to mescaline or corydrane, or drinking too much or nearly having a heart attack or suffering a stroke or recovering (or not recovering) in the hospital. There is not much for readers to love about Beauvoir’s ‘essential love’ in this book, and in this sense, it is hard to sympathise with a great many of Beauvoir’s choices. Indeed, it often makes it more difficult to understand parts of her life, except perhaps for her contingent love affairs (with Jacques-Laurent Bost, with Algren, with Lanzmann, and others) – a theme which, in my view, dominates a bit too much of the book. Thus, for example, as the gangrenous corpse of Sartre lay in the hospital bed, Beauvoir, inconsolable, fell beside him until she slept. It is a scene which is so personal and affecting that one wishes to close the book and apologize for intruding. And yet, the reader may feel baffled. The scene, I have long felt, requires some amount of reflection or commentary on the themes Beauvoir herself reflected on for a lifetime: being-with-others, death and the strange and conflicting nature of love. They are precisely the philosophical skills Kirkpatrick could have brought to this book. Nevertheless, she makes quick work of the scene and we are left wondering in silence about such ultimate questions (377).

One may be disappointed that for someone as philosophically skilled as Kirkpatrick (she has written her own books on the thought of Sartre and existentialism) there is, relative to its length – some 400-pages – precious little in-depth discussion about the ideas in Beauvoir’s works themselves. Kirkpatrick prefers broad summary, reviewing a work’s publication history, and discussing the public and intellectual response to Beauvoir’s texts. This partly works, for it shows without a doubt that a primary source of frustration for Beauvoir was the unfair treatment she received in the press and among her intellectual associates. Kirkpatrick delights exposing critics for refusing to engage with Beauvoir intellectually, attacked her ad feminam, or saw her as unoriginal or simply considered her as Sartre’s most loyal (or most attractive) disciple. French public reaction was often set in extreme terms: when Beauvoir was read as a success, it was an enormous professional triumph and sales burst expectations. For example, The Mandarins won France’s most prestigious literary award and, in 1960, The Prime of Life – her memoir which recounts the years between 1922 and 1944 – was considered among her best writing and gained her a wide audience among ordinary people (316). And yet, The Second Sex had been met with scorn. Albert Camus, for example, said that the book made French men look ‘ridiculous’ and the Vatican put it on the list of forbidden books (261). As Kirkpatrick retells well, ‘[w]ith a population depleted by war France needed citizens – so Beauvoir was accused of being a traitor to her sex and to her nation’ (256). It would not be the only instance Beauvoir was considered a traitor to France; she would again face accusations after her public denunciation of French colonialism in Algeria along with her fellow editors of Les Temps Moderns (292).

Regrettably, Kirkpatrick frequently does not put Beauvoir’s intellectual development adequately in her historical context, though the book best succeeds when she does. There is, for example, no real discussion about World War II or its aftermath nor French colonialism in Algeria – both of which constitute the basis of a great deal of Beauvoir’s writing (e.g. in powerful passages in The Ethics of Ambiguity) which continue through her later political activities (e.g. 340, 383-384). Kirkpatrick is content to say that the Algerian War ‘was raging’ (292), or that ‘the Algerian War had intensified and Beauvoir became so obsessed with it, so disgusted to be French, that she couldn’t sleep’ (297), and after a 1962 referendum, Sartre and Beauvoir ‘were disillusioned by the way France had desperately clung to colonialism’ (321). Though Beauvoir wrote an enormous amount of anti-colonial political analysis, especially in Force of Circumstance, Becoming Beauvoir leaves us to wonder what it was, specifically, about French colonialism that Beauvoir found atrocious while so many of her fellow French citizens did not. Why had she and Sartre agreed on this denunciation, while for much of the book, as Kirkpatrick reminds us, Beauvoir was all too willing to disagree with him, especially about his most radical political positions (345)? This results in a similar lack of discussion about the impact of comrades such as Frantz Fanon. Though Beauvoir would go on to write a preface to Gisele Halimi’s Djamila Boupacha at the same time Sartre wrote the preface to Wretched of the Earth, readers are left wondering what influence anticolonial politics in general and Fanon in particular had on Beauvoir – and vice versa. This seems to me to have been a missed opportunity to discuss such a long-neglected topic. Lewis Gordon, for example, has criticized Fanon for ‘attributing to Nietzsche ideas clearly drawn from Beauvoir’ (Gordon 2018). Kirkpatrick says that ‘Fanon left her with a strong impression, long after they said goodbye’ (320). Whatever the impression was – whether it was direct or by detour, or if it subsequently manifested in her work, letters or politics – Kirkpatrick does not say.

Nevertheless, when Kirkpatrick succeeds, she does so magnificently and combines, almost cinematically, Beauvoir’s life, history, loves – her situation. In my view, two of the most successful chapters in the book (the eleventh and thirteenth) meet Beauvoir around the publication of The Second Sex. She flew to Chicago to see Algren despite how difficult their relationship had become (271). She met famous artists and writers and subsequently published her travelogue as America Day by Day, which was censored for its frank discussion of American racism (234). She began relying on amphetamines to finish her novel (The Mandarins), and when she arrived back in Paris, she had begun to really experience politics and culture, from the live music of Miles Davis to the newly published writings of Aimé Césaire. One missing component, however, was the influence of the French Communist Party (or Marx himself) on Beauvoir, which had so dominated left politics. Kirkpatrick, on the other hand, does spend many pages detailing Beauvoir having truly become an engaged intellectual, championing the cause of women the world over and cementing her legendary figure status (especially among the younger generation) in the process.

Kirkpatrick seems to be deeply hesitant to criticize Beauvoir and saves her harshest words for Beauvoir’s sometimes strange and oftentimes deceitful polyamorous relationships (154-155). It is a decision which is both welcome and frustrating. On the one hand, for a long time Beauvoir has been the victim of bad faith attacks – one can hardly call them criticisms at all – and Kirkpatrick is wonderful at highlighting how frequent and unfair such attacks have been. Even in the Anglophone sphere, it is still only a relatively recent development to consider Beauvoir on her own terms, as an independent philosopher, thinker, theorist or writer. The work of Sonia Kruks, Toril Moi, Nancy Bauer, Judith G. Coffin, Nathalie Nya, Laura Hengehold, Lori Jo Marso, Elaine Stavro, Meryl Altman, and many others illustrate this important scholarship.

On the other hand, we ought to be wary of going too far into the direction of critique-less praise. It is part of a loving relation to critique; none understood this better than Beauvoir herself. Kirkpatrick quotes Sartre in an interview with Michel Contat which illustrates that Beauvoir pulled no punches for her essential love. Contat asks if Sartre had to defend himself against Beauvoir’s criticism. He replied: ‘Oh, often! In fact we have even insulted one another. […] But I knew that she would be the one who was right, in the end. That’s not to say that I accepted all of her criticisms, but I did accept most of them’ (370).

I have emphasized some disagreements with Kirkpatrick’s book, but I ought to close by emphasizing that hers is very much a welcome addition to the relatively small amount of high-quality material found in the Anglophone world on Beauvoir (and, for that matter, on Sartre). It succeeds in the task of bringing an enormous amount of information to a new generation of readers in a highly accessible but not over-simplified manner.