Marx & Philosophy Review of BooksReviews‘How the World Works: The Story of Human Labour from Prehistory to the Modern Day’ by Paul Cockshott reviewed by Katie Jones 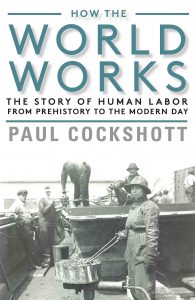 Paul Cockshott
How the World Works: The Story of Human Labour from Prehistory to the Modern Day

Katie Jones (@cartesian_split) is a post-doctoral researcher at Swansea University. She specialises …

Work: we all have to do it – or do we? A momentary reflection on such conventional wisdom would tell us that many people do not work. Some live off inherited wealth or receive a passive income, whereas others are not admitted into the labour market and live precariously due to a lack of work – if ‘work’ is defined as waged labour, that is. Paul Cockshott’s How the World Works: The Story of Human Labour from Prehistory to the Modern Day considers the nature of ‘work’ from a Marxist-materialist perspective via an historical examination of work from ancient to modern times.

The title playfully implies the ambitious task the author sets himself, though occasionally the myriad graphs and equations feel that the title might be less tongue in cheek and more a claim to authoritatively know how the world does indeed work. That said, the book is good-natured and readable, if somewhat surprising at times: it opens with a meandering extended metaphor describing termites, their ‘work’ habits, fixed roles and their toil in service of the ‘huge mother or “queen,” a sort of yellowish pulsating sausage’ (16). Initially surreal, this opening gives the impression of a kind of cinematic frame that zooms outwards from the swarming termite nest to the sweeping view of history the author wishes to portray. The interest in the animal kingdom – we learn – also has the purpose of encouraging us to question our own social organisation and economic norms (19), however such analogies that rely upon projections and constructions of the animal world are apt to lead to ‘common sense’ generalisations, as opposed to insight.

The appealing breadth of the book helps to demonstrate the entanglement between technology, economy and social organisation for a general – non-specialist – reader. For readers with a limited understanding of popular economic theory, criticisms of its clichés feel lively and informative. For instance, the reader learns the problem with the oft-cited and well-worn ‘law’ of supply and demand: ‘the theory is unfalsifiable. It makes no specific predictions about prices and quantities. It is true by definition and vacuous by definition’ (68). ‘Peasant Economies’ – the third chapter – was particularly interesting in its careful tracing of the transition from slavery to feudalism, and indeed the comparisons made between the modern era of debt. This chapter creatively exposes the relation between ordinarily compartmentalised times and economic systems to encourage readers to query what are presented as ‘fair’ transactions between the individual and the bank.

Given the mammoth task of describing the history of employment, the reader should inevitably expect to discover some generalisations with which to find fault, and the authoritative style can be jarring at times for a reader familiar with divergent perspectives left unmentioned. While not a dominant feature of the book, Cockshott’s approach to sex work – which the author does not treat as work ‘proper’ – fails to engage with any feminist literature of the last decade on this topic. According to How the World Works, to define sex work as work is monolithically neo-liberal: ‘since the ideological dominance of neo-liberalism in the 1980s, there has been a move to re-label prostitution as “sex work”’ because under capitalism ‘any transaction in which money changes hands is made to seem like labour’, reflecting what Marx calls the fetish-character of the commodity and Joseph Schumpeter called the ‘veil of money’ (190-191). The problem with refusing to acknowledge sex work as work is that it is a lived reality, and without conceptualising it as work, the people performing this labour (not only women, as seems to be an assumption) are less safe while society criminalises either sex workers or their client base. This does not mean an uncritical acceptance of what Molly Smith and Juno Mac critique and identify as ‘The Erotic Professional’ in their tour de force Revolting Prostitutes (2018), but rather a recognition that conceptualising sex work as work steers the conversation away from the mainstream dualism of either moralising opposition or free-market / neo-liberal accounts, and allows us to start talking about workers’ rights – the right to be paid fairly, the right to refuse to perform certain acts, protection from violence or workplace harassment that is upheld by law. While many socialist-feminists would likely agree that there is a neo-liberal narrative that dominates conceptualisations of sex work, there is also a deep well of nuanced and powerfully political writing that addresses sex work as work – and these are missing from Cockshott’s critique.

For this reader, Cockshott’s sixth chapter, ‘Socialist Economies’, is the most illuminating and important, as he responds to the way in which society tends to judge socialism against an ideal, as opposed to observable tenets of socialism (208-210). This chapter identifies and isolates the particularities of socialist societies that have existed, while challenging conventional arguments against socialism’s feasibility – for instance, by querying the notion that the USSR constituted state-owned capitalism, as opposed to a form of socialism. Some argue that the USSR was not socialist because it did not create a new mode of production – or indeed have a mode of production. To the contrary, Cochshott suggests that the USSR’s mode of production was ‘electrified machine industry’ – the same as the USA at the time – but rather than socialist societies requiring their own mode of production, ‘different economic forms of society are distinguished by the means by which surplus is produced’; ‘socialist society must have its own form of surplus extraction’ (248-249). This chapter also expands and builds upon previous chapters that explore pre-monetary societies by exploring alternatives, such as labour time accounting.

The final chapter – ‘Future Economies’ – continues to speculate on the challenges of the future (such as climate change, food provision and global health) and asks: ‘is there anything about the transition to a post-fossil fuel economy that would favour communism over capitalism?’ (275). The author considers trends relating to materials, transport and technology to speculate on how the future might look if we continue along on current trajectories, and poses possible alternatives, while tempering our optimism regarding technological advancement. The ultimate proposal made in this chapter is a transition away from a monetary economy, with goods priced in hours worked in order to de-fetishize the relationship between goods and labour.

In Post-Capitalism: A Guide to Our Future (2015), Paul Mason dubs Cockshott a ‘cyber-Stalinist’, and this latest account of work does little to challenge this reputation. How the World Works is a mix of precision and generalisation that makes it both informative and lively. However, Cockshott’s account rests on an assumption that has been widely challenged. His book opens with the statement, ‘[h]uman society has to work to survive’ (15). The problem and apparent necessity of work is the same subject explored in Kathi Weeks’ The Problem with Work (2011), though she opens with the question: ‘Why do we work so long and so hard?’ (Weeks 2011: 1). Weeks uses Max Weber’s critique of the Protestant work ethic to examine contemporary working culture and challenge the notion that to criticise work is to devalue and criticise workers: ‘The value of work, along with its centrality to our lives, is one of the most stubbornly naturalised and apparently self-evident elements of modern and late, or postmodern, capitalist societies’ (Ibid: 43). The historical breadth of Cockshott’s work occasionally comes at the cost of engaging with such important criticisms of work culture. This said, How the World Works nonetheless holds appeal for those with a special interest in socialist writing and the general reader alike (regardless of political affiliation), and makes practical arguments that respond to the question of what a socialist society looks like or could look like – and whether the reader agrees with Cockshott’s vision or not, the arguments are undeniably intriguing.