Marx & Philosophy Review of BooksReviews‘Critique On The Couch: Why Critical Theory Needs Psychoanalysis’ by Amy Allen reviewed by Ali Sadeghi 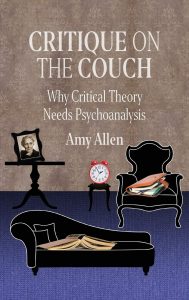 Ali Sadeghi obtained his PhD in international relations from the London School of Economics. He has …

Amy Allen is Liberal Arts Professor of Philosophy and Women’s, Gender, and Sexuality Studies and head of the Philosophy Department at the Pennsylvania State University. She is one of the most prolific critical philosophers in the United States today. In her previous books she concentrated on discussing various aspects of critical theory in the wake of postcolonial and feminist discourses. In Critique On The Couch, Allen poses the question of why she thinks critical theory needs psychoanalysis.

The book consists of an introduction, five chapters and a conclusion. However, one may be struck by a certain ambiguity in the title of the book itself. On the one hand, it is titled ‘Critique on the Couch’ suggesting perhaps, that the book aims to psychoanalyze critical theory itself. Indeed, there are passages in the conclusion that warrant this reading. But on the other hand, the subtitle of the book reads ‘Why Critical Theory Needs Psychoanalysis’. This seems to point to the argument that ‘only by engaging with psychoanalysis can critical theory address some of its problematic tendencies and blind spots.’ (26) So, it is not critique that is on the couch, but rather modern society.

Allen begins by saying that the early Frankfurt School thinkers tried to bring Marxism and psychoanalysis together to present a more nuanced picture of the modern society. The revisionist psychoanalysts, however, tried to sociologize psychoanalysis and abandoned the earlier marriage with critical theory. Fromm abandoned Freud’s drive theory and was driven out of the Institute for Social Research. Later on, Habermas dropped psychoanalysis from his research program.

In a sense, the whole of the book aims to argue these three points.

Chapters one and two deal with the first of these points. Allen argues that psychoanalysis is a much-needed check on the tendency of critical theory towards excessive rationalism and idealism. Critical theory is in many ways a child of the ideas of Hegel and Marx and therefore, a child of the Enlightenment, with its emphasis on rationalism and utopianism. After Auschwitz it becomes exceeding difficult to believe in either and psychoanalysis helps us avoid these pitfalls.

For Allen, though, it is not Freud but Melanie Klein who provides a realistic conception of the self. One problem with the marriage between psychoanalysis and critical theory has always been the ahistorical nature of the former and the importance of history to the latter. If drives are natural, then, they are ahistorical and fixed. This poses a challenge to critical theory with its connections to Hegel and Marx for whom history was of central concern. Allen, however, believes that Klein’s commitment to primary aggression as well as her emphasis on the subject’s need for socialization means that her version of psychoanalysis is not incompatible with critical theory’s commitment to history. Allen tries to prove this by discussing Klein’s theory in some detail, but the jury is still out on whether she succeeds or not.

Developmentalism refers to idea that developed in the eighteenth and nineteenth centuries and argued that societies progress from lower forms of social, political and economic structure to higher forms. History is linear and Europe leads the world by being the most advanced part of the globe. Other societies will follow Europe’s example by becoming more and more modern and rational in time. Europe and modernity stand for rationality and science, whereas other societies and cultures are enmeshed in servitude and myth. Such was the Eurocentric and developmentalist mindset of those centuries.

Allen, who in previous work has dealt with the idea of progress and critical theory, takes issue with Habermas, who she says, believes in societal development in a cumulative and progressive manner. Accordingly, the modern view represents an advance over the mythical worldviews. It is this that Allen finds unacceptable.

The third point raised in Critique On The Couch is what Allen calls ‘psychoanalysis as critique’. Arguably, this is the most interesting and original part of the book, but it is also the most contentious. Recall that the early years of the Frankfurt School coincided with the rise of utopianism. Not only Marxism, but even fascism and Wilsonian liberalism preached the coming of utopia. It was in this historical context that the Frankfurt School theorists tried to connect the psychoanalytic unconscious to the problem of utopia.

The demise of the lure of utopia leads to a move away from psychoanalysis in contemporary critical theory. Already in the 1950s and 1960s, Adorno was ‘suspicious of utopian speculation that rest on false promises of reconciliation.’ (20). Allen however, argues that ‘critical theory needs psychoanalysis in order to articulate a meaningful conception of resistance to social norms and the prospects for emancipation without falling into problematic forms of utopian thinking or false models of reconciliation. Psychoanalysis thereby offers critical theory a way of rethinking the aims of critique’ (22).

Allen emphasizes the concept of transference as the key to helping critical theorists understand societies. ‘Taking seriously the way that the analyst is necessarily implicated in the transferential relationship suggests by analogy a view of the theorist as an engaged participant in ongoing social and political struggles’ (175).

It is in the conclusion that Allen finally addresses the central question of the book, i.e. how can psychoanalysis help critical theorists better understand social and political phenomena. ‘In Kleinian terms, we might say that our politics is more and more often conducted in a paranoid-schizoid mode. The idea here is not to diagnose particular individuals, groups, or political movements or parties as being stuck in the paranoid-schizoid position. Rather, the suggestion is that Klein gives us a rich and resonant vocabulary for talking about certain logics that continually reemerge in and shape politics in the present’ (193).

In the end, Allen argues in favor of what she calls ‘democratic politics in a depressive mode’ (196). By this she means that politics has to abandon utopian dreams and be content with trade-offs and compromises. Those who, in the past, tried to create heaven on earth ended up by creating hell and this not because they were insincere and dishonest, but for the simple reason that the road to hell is paved with good intentions. Having good intentions is never enough, for people live not by intentions but by the consequences of other peoples’ actions. ‘From the Kleinian perspective, we will never be rid of the paranoid-schizoid mode of politics entirely. The paranoid-schizoid mode is a permanent possibility, always waiting in the wings, ready to return particularly under conditions of heightened anxiety and stress’ (197).

One is left feeling that Critique On The Couch ends abruptly. Some of the theses discussed in the conclusion could have provided material for one or two additional chapters. Most of the chapters deal with psychoanalysis and show how its different stands have developed over the past century. Yet not enough attention is paid to critical theory and how it can benefit from psychoanalysis. For example, the issue of the rise of right-wing populism that is mentioned in the conclusion should perhaps have been more fully discussed in a separate chapter. Afterall, it was the rise of right-wing politics that, in an earlier era, provided the background for the rise of critical theory in the 1920s and 1930s in Germany. Does the resurgence of right-wing populism mean that we need to go back to critical theory to gain a fuller understanding of present-day events? Is critical theory better able to explain current world trends than say, neo-liberal or Parsonian theory? And in what ways and how?

Allen’s Critique On The Couch is clearly timely. If nothing else, the worrisome events of 6 January 2021 on the US Capitol showed the importance of the issues discussed. However, it can be suggested that Allen’s project is unfinished. More work by her or others writing within the field of critical theory is needed to address questions and issues raised in the book.