Marx & Philosophy Review of BooksReviews‘Makers of Worlds, Readers of Signs: Israeli and Palestinian Literature of the Global Contemporary’ by Kfir Cohen Lustig reviewed by Alexander Worsfold 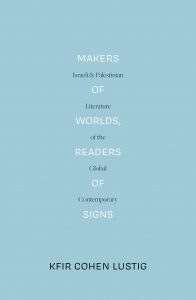 Makers of Worlds, Readers of Signs presents a new approach to understanding changes in literary production, particularly the movement from ‘World Literature’ to ‘Global Literature’. This ‘Global Literature’ is defined by equivalence in the origin of literature produced all over the world due to a common local experience. This work is also a critique of the liberal understanding of literature production and how power, capital and aesthetic production are intertwined. With a materialist analysis, Lustig seeks to understand how the spread of globalization, a new stage of capitalism, across the global periphery has created the material conditions for an equivalent but not equal space for aesthetic production. The book utilises Palestinian and Israeli literature as a case study to synthesise a largely structural analysis for understanding changes in literature brought about by the development of capitalism. Structurally, the work is split into four chapters, two focused on Israeli literature and two on Palestinian, following his periodisation of literature in relation to the global capitalist ‘moment’ in history. The core of Lustig’s structural theory is confined to a dense extended introduction. The monograph is then completed by a relatively short conclusion, which mainly rehashes points made in the introduction and throughout the core of the book.

Due to the centrality of the structural analysis put forward in the book, it is important to properly outline its structure here. Lustig identifies a series of associated factors that mark the global capitalist ‘moment’ – that being the time when ‘modern’ market capitalism fully permeates a society. This happened unevenly across the world, and Lustig makes a strong example of European transition in the nineteenth and early twentieth century, before remarking about how Israel and Palestine as part of the global periphery underwent these changes later. The first of these factors is the abstraction of the economic limit from the local and immediate reality. The use of ‘limit’ here is directly drawn from Hegel, but reapplied effectively for understanding the factors that dictate aesthetic production – this is not a border with which to interact, but rather makes up the experiences, history and social structure of any particular author in a given time. Lustig is careful to specify that this ‘limit’ is not an external factor with which a novel interacts but rather a ‘shared historical ground’. In his example of Western Europe and specifically Britain, he argues that the increasing integration with Empire shifted the economic limit of the average person. This limit originally relied on their local or regional economy, but gradually became dependent on events in India and other parts of the Empire, thus becoming abstracted from their lived, physical and social limit. This shared historical ground becomes the basis for the argument that equivalence exists in literary production across the world due to a shared ‘limit’ reliant on global capitalism. This is one of the most effective arguments Lustig makes throughout the book – building on concepts introduced by Franco Moretti, but expanding his scope, arguing that the forces of capital have erased distinction between states as well as social groups.

The second factor is the transition from heteronomous production to an apparently autonomous form of aesthetic production. The forces directing aesthetic production in the first heteronomous, pre-global moment period are clear – institutions such as the Church or a monarchy clearly influenced literary production. The advent of global capitalism separates art from its institutional moorings and removes its social function, shifting the source of artistic creation into the space of the individual. The autonomy in aesthetic production is therefore derived from following its own immanent set of rules. This autonomy, Lustig argues, is only an illusion, since the systems of power in a capitalist system still exert control over aesthetic production, they are simply more diffuse and harder to discern. As a result of this transition, literary works from before the transition to supposed autonomy are deemed ‘non-aesthetic’ in a Kantian sense, since they are not derived from a purely artistic origin. This argument fits into to a wider discussion about the way in which capitalism legitimises itself and with ideas about capitalist realism as described by Mark Fisher, where non-capitalist forms of literary production are somehow deemed ‘less artistic’ due to their obviously heteronomous source of origin.

The theoretical framework Lustig lays down at length in his introduction is cohesively and effectively applied throughout the work. In the first chapter, which evaluates and critiques Israeli literature in the heteronomous pre-global moment, Lustig effectively demonstrates how the Israeli state building project and its principles determined literary production. I draw particular attention to his analysis of Yizhar’s Midnight Convoy, despite its shorter length compared to the other works Lustig approaches. Identifying Yizhar’s attempt to create an ‘independent sphere’ parallel to the statist project, the strength of Lustig’s theory becomes apparent. Prior to the global capitalist moment in Israel, the creation of an ‘autonomous’, private reality is only possible through an abstract negation of the ‘heteronomous’ state project. This is not a new notion – particularly in scholarship on Yizhar’s work, which focuses on its rejection of ‘Israeliness’ whilst simultaneously failing to adhere to western secular ‘novel’ forms. The effectiveness of Lustig’s analysis is in tethering this so gracefully with a larger transnational structure to understand global capitalism’s impact on literary production.

Lustig periodises these changes separately for both Israeli and Palestinian literature. He argues effectively that the integration of Israel into the global capitalist system occurred sometime around 1985, and that the Palestinian shift happened in the wake of the Oslo Accords in 1993. This particular period is termed as the ‘global capitalist moment’, describing the point or period at which the material conditions change along the lines Lustig explains. Lustig does not dedicate much more than a page or two to economic analysis to substantiate these dates, but they are not paradigm changing concepts. They are particularly useful at challenging the internal periodisation of Israeli literature into ‘eras’ largely centred around a generation or conflict, instead identifying trends in Israeli literature before and after the sweeping privatisations in Israeli society through the 1980s. It must be said that there is more focus on Israeli literature throughout the piece. It is clear that Lustig has an exceptionally deep understanding of Israeli literature, particularly during his first period (pre-1985), and the strength with which he analyses and compares a wide breadth of novels and short stories is very impressive. However it serves the second unfortunate purpose of making the analysis of Palestinian literature appear shallow by comparison. The final chapter, for example, is mainly comprised of an extensive and fascinating examination on Selma Dabbagh’s Out of It – but this contrasts with the breadth of case studies used in earlier chapters, particularly in the first chapter. The analysis itself cannot be faulted, but its specificity feels out of place in the rest of Lustig’s work which is trying to substantiate a comprehensive new structure with which to approach ‘Global Literature’, and the argument would have benefited from a greater range of works examined.

Thus the title may suggest a regional focus on Israel and Palestine, but this is really a work looking at international aesthetic production and the global impact of capital – the use of Israel and Palestine is just a convenient and well applied case study in which literature production so visibly changes along the fault lines Lustig describes in his theory. In Palestine and Israel there are very clear and obvious changes in a relatively short period of time – particularly Palestinian literature is abruptly altered in the wake of the Oslo Accords, a phenomena that leads to the rapid penetration of international NGOs into the Occupied Territories, particularly the West Bank. The process of ‘NGOization’, a word that leaves a lot to be desired, is very applicable to Lustig’s theory. Building on the work of Arundhati Roy as well as Aziz Choudry and Dip Kapoor, the diffusion of power and political action into ‘apolitical’ NGOs is a prime example of the diffuse and abstract heteronomy that continues to exist after the global capitalist moment. The evidence of the heteronomous mode of literature production that Lustig uses to define aesthetic production in the pre-global capitalist moment is made more obvious by the crucial role of nationalism in Israeli and Palestinian literature. The Israeli statist novel and the Palestinian resistance novel are indisputable examples of aesthetic production serving a cause, and this is why Makers of Worlds, Readers of Signs utilises them, since they make such an indisputable groundwork of which to build a structure to understand the more intangible effects of global capitalism.

Makers of Worlds, Readers of Signs is ultimately a very effective foundation for a new historicised structural analysis of global literature in the context of globalisation. Fundamentally, Lustig argues that literature production transforms with the material conditions that moves aesthetic production from being a process of ‘making’ and changing the world, to ‘reading’ a modern capitalist world from a uniquely individual perspective. The work is exceptionally well written although it is very dense throughout its introduction, and the case study of Israeli and Palestinian literature is largely well applied and concisely thought through. It is an excellent basis upon which future case studies of other aspects of global literature could be conducted to further understand how late-capitalist conditions affect aesthetic production.