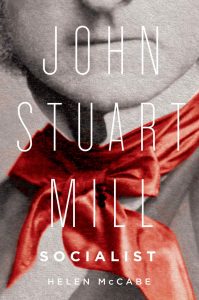 ‘If one knows anything about John Stuart Mill’, writes Helen McCabe, ‘it is probably that he is revered as one of the “founding fathers of liberalism”’; consensus has it that Mill is a paradigmatic liberal (3). According to McCabe, however, this is an erroneous view. Mill was a socialist – a liberal socialist, but a socialist nonetheless.

The purpose of John Stuart Mill: Socialist is to reconstruct Mill’s utopia. Deploying the tools of both the history of political thought and analytical political theory, McCabe meticulously lays out the content of Mill’s socialism, piecing together the disparate passages relevant to such an endeavour from across Mill’s sprawling oeuvre. The result is a book of staggering insight and importance.

John Stuart Mill has two intended audiences. The first is scholarly: painstakingly researched, the book engages with the various extant positions on Mill’s relationship to socialism, taking up debates including the question of the longevity of Mill’s socialist commitment and the role played by his wife Helen Taylor Mill in shaping his socialist ideas. Secondly, and no less consequentially, McCabe intervenes in a wider public discourse around what socialism and liberalism mean. Seeking to recover what she regards as a peculiarly useful body of ideas, McCabe rightly argues that there is more to socialism than Marx. Similarly, neither libertarianism nor Rawlsianism, on McCabe’s view, ought to have a monopoly on what it means to be either liberal or liberal socialist.

The point at which Mill begins to amend the philosophic radicalism he inherited from his father James Mill and godfather Jeremy Bentham is in 1826-27, following the nervous breakdown Mill suffered that winter. McCabe shows us how, under the influence of Saint Simonian ideas, Mill adopted a philosophy of history which foregrounded the notion of progress and therefore opened up space ‘for an age of future improvement beyond Mill’s contemporary age’ (28). Likewise, because of the Saint-Simonians, Mill came to recognise that ‘private property was not necessarily fundamental to securing utility’ and that the ‘laws of distribution are man-made’ (29).

Mill was sympathetic to socialism and socialists. During the 1810s and 1820s, he was familiar with the work of Owen and several leading Owenites; the Christian socialists Frederick Maurice and Edward Vansittart Neale were on his radar; and Mill met Saint Simon in 1820 and Barthélemy-Prosper Enfantin and Amand Bazard ten years later. Mill did not, however, actively identify himself as a socialist until the mid- to late-1840s. Nonetheless, Mill still criticised capitalism. He did so, on five grounds: its inefficiency and wastefulness, the constraints it placed on liberty and individuality, its inequality and injustice, its relentless pursuit of growth, and the poor quality of human relationships it fostered.

The term ‘radical meritocracy’ does not accurately describe Mill’s mature vision of the good society. Yet Mill thought that the system of individual property could and should be reformed in radically meritocratic ways. Ever the pragmatist, both before and after he became a socialist, Mill advocated a stringent inheritance tax, a peculiar tax on the ‘Future Unearned Income of the Rent of Land’ (which effectively brought land into public ownership), state and municipal ownership of natural monopolies such as railways and utilities (gas and water, for example), and profit sharing in industry. However, McCabe argues that, while Mill regarded these reforms as expedient, Mill’s normative preferences were actually for something far more transformative.

When Mill did eventually call himself a socialist he used the qualifier ‘qualified’, not because he wanted to ‘show that his commitment was only tentative’ but because Mill embraced ‘an individual and original form of socialism that differed in significant ways from other existing forms’ (242). McCabe errs somewhat in recycling the language of ‘utopian’ socialism, meant pejoratively, that we inherit from Marx and Engels, yet she is undoubtedly right to assert that we ought not to see Mill’s socialism as in any sense utopian. Besides the socialists already mentioned, Mill was also familiar with Charles Fourier, Victor Considerant, Étienne Cabet, Louis Blanc and the other French cooperative socialists. Just how much Mill knew of Marx – little or nothing – is open to question. But what we do know is that Mill reserved his harshest criticism of socialism for its revolutionary type.

In Mill’s lifetime, socialism, as McCabe succinctly puts it, ‘could either be “communist” or “non-communist”; state-scale or small-scale; “evolutionary” or “revolutionary”; and […] “self-sufficient” or “interactive”’ (100). Mill consistently favoured small-scale, evolutionary schemes, rejecting statist, revolutionary socialism as a threat to liberty and stability. The widest breech between him and other socialists occurs over Mill’s defence of competition. All the same, it does not ‘separate him from all contemporary socialists’ (106). On the contrary, McCabe records how Mill spoke highly, in particular, of Fourier’s cooperative scheme which accounted for incentives to labour and envisaged individual cooperatives and the workers within them engaging in ‘friendly rivalry’ (106).

That is not say that Mill ruled out entirely the possibility of a society free from private property, only that he thought it required a degree of moral and intellectual education lacking in most people at the time. Taking these feasibility constraints into consideration, Mill, then, encouraged small-scale ‘experiments in living’ by those willing and able to live communistically – i.e. the formation of intentional communities – and, more immediately practical for society as a whole, consumer and producer cooperatives that would transform a system of individual property into a communal one from within.

Mill used the metaphor of the ‘North Star’ to describe his relationship to socialism. Even if we do never reach it, he reasoned, we ought to use the socialist ideal ‘as a navigational guide’ (115). McCabe is an excellent guide in her own right in elucidating these issues. Where the book really excels, however, is in its final two chapters, where McCabe intervenes in the debate concerning the nature of Mill’s egalitarianism and maps the content of his utopia in the round.

Mill was a utilitarian. Underpinning the realization of the overarching principle of maximizing utility, he cleaved to five ‘secondary principles’: progress, security, liberty, equality and fraternity (141). Among those secondary principles, McCabe argues that Mill’s commitment to fraternity has been largely ignored in existing accounts. Dismissing the label ‘communitarian’ as anachronistic, McCabe nonetheless shows how Mill valued a particular social ethos that was ‘not just tolerant and open, but communal, and concerned with the common good’ (184, 140). Mill’s commitment to fraternity ‘was one of the things’, McCabe convincingly claims, ‘that made him a socialist’ rather than a liberal (184). It is a mistake, she goes on, relatedly, ‘to link Mill to luck egalitarianism except as a short-term means of moving toward something better’ (177).

On McCabe’s compelling reading, Mill was a relational egalitarian. What that means is that Mill saw justice as a less a question of what people are owed, but rather, centrally, a question of how people are treated. Emphasis here is placed on egalitarian social relations as opposed to ‘the equal distribution of something’ (178). McCabe expertly shows how Mill, in consequence, endorsed ‘the Blancian idea “that all should work according to their capacity, and receive according to their wants”’ (162). In an immensely skilful analytical manoeuvre, McCabe thus proceeds to defend Mill from the charge of unreasonable ‘elitism’ in relation to his advocacy of plural voting by arguing that it can be seen as a specific example of Blanc’s principle, since ‘the demand that we treat one another as equals, and see one another fundamentally as equals, also entails a demand that we acknowledge where we are not, in fact, equals’ (226).

Here, as elsewhere, McCabe’s analysis is devastatingly deft. The book, indeed, abounds with material dealt with in subtle and cogent ways: Mill’s Religion of Humanity, his ‘proto-environmentalism’, his belief in gender equality and alternative family structures, his debt to Hobbes and his views on the public ballot.

A somewhat churlish critic might charge John Stuart Mill with being both insufficiently historical and insufficiently presentist. We hear nothing, for instance, about Mill’s British interlocutors, Charles Dilke and John Morley, nothing about Mill’s influence on British liberals and socialists like L. T. Hobhouse, J. A. Hobson, William Morris, Oscar Wilde and H. G. Wells, or the speech acts Mill performed in his writings. And we do not hear anything about platform capitalism which Mill would no doubt have abhorred or real examples of cooperative socialism outside of Victorian Britain: Yugoslavia or Mondragon Corporation, perhaps.

McCabe notes a conservative strain in Mill and mentions briefly Thomas Carlyle and Samuel Taylor Coleridge. There is, also, more to be said on this issue, I suspect. But, more importantly, what McCabe neglects to engage with in John Stuart Mill is anarchist ideology, for in many ways Mill has more in common with that ideological tradition than socialism. Mill’s clearest successor in the twentieth century in the field of political thought is Bertrand Russell, his godson, who sailed closely between liberal socialism and anarchism, reconciling the latter with realist thinking. With his emphasis on decentralisation, liberty, prefiguration and opposition to an overbearing and oppressive state, it is a strain of thought that Mill, perhaps, originated.

At any rate, whatever describes Mill best – liberal socialist or realist anarchist – when McCabe writes that ‘it is time we paid due attention to his ideas’, she is unequivocally right (18). John Stuart Mill is a marvellous book, industriously researched, skilfully argued and delivered in elegant prose. Essential reading for specialists and non-specialists alike, what McCabe succeeds in showing us is that Mill provides a practical form of socialism concerned with freedom, equality, cooperation, diversity, human flourishing and the environment, entirely free of the ressentiment which typifies much of what passes for left-wing theory today.