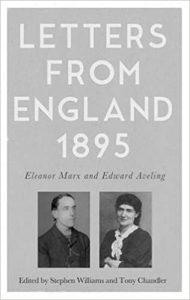 The 1890s was one of the all too frequent periods of turbulence on the British Left. The still embryonic labour movement was riven with sectarian divisions – plus ça change – and the shadow of Karl Marx (who had died in 1883), and the influence of the now elderly Friedrich Engels (who died in 1895), loomed large.

But there were also other major labour movement figures with high profile presences in the 1890s: amongst them, John Burns, Keir Hardie, and pre-eminently, Eleanor Marx and Edward Aveling (hereafter Marx and Aveling). The ‘1895 letters’ (seven of them) from Marx and Aveling, which are the subject of this book, are thus of intrinsic interest to those concerned with the history and evolution of the British Left.

The ‘letters’ – better described, as the editors observe, as ‘articles’ – were written by Marx and Aveling for a Narodnik journal (Russkaye bogastvo), which, by 1895, was under the influence of the dynamic Nikolai Mikhailovsky. Marx and Aveling, like Karl Marx and Friedrich Engels, had ‘a firm conviction that internationalism was central to the socialist cause’. (editors’ Introduction, 14) Their interest in writing these ‘letters’ for a Russian journal, to describe and analyse contemporary British politics from a socialist perspective, is one example of this commitment. What is perhaps more surprising is that they chose a Narodnik journal. Mikhailovsky, although initially ‘sympathetic to Karl Marx in the 1870s’, became increasingly ‘hostile to what he saw as the inhuman indifference of the Russian Marxists to the suffering wrought by the famine of 1891-92; the determinism of “scientific” Marxist philosophy … and the Marxists’ overt support for the growth of capitalism in Russia.’ (Introduction, 2)

However, the content and overall approach of the ‘letters’ were not recognisably Marxist. They certainly reflect a generally socialist perspective on ‘the disputes churning in British socialism … (Introduction, 21), but they are much more a lively commentary on current affairs than they are theoretical, still less ‘revolutionary’, analyses.

The editors, Stephen Williams and Tony Chandler, have provided a substantial (43 page) Introduction, which gives a detailed, authoritative and accessible context for the ‘letters’ that follow. (It would, incidentally, have been helpful to have brief information about the editors themselves.) They describe, in an appropriately detached tone, the ultimately tragic relationship between Marx and Aveling, and analyse too the specific background to the publication of the ‘letters’, suggesting that Nikolai Danielson, translator of the first volume of Capital in Russian, was the most likely intermediary with the Russian journal.

Aveling had charm and eloquence; he was also an able and charismatic public speaker. However, few would disagree with the editors’ damning judgment that he was a ‘scoundrel and worse’, having both a ‘propensity for getting into debt’, borrowing indiscriminately from both friends and working-class socialists alike; and a scandalous record of extreme promiscuity – with a particular predilection for young girls – and an alleged rape. They conclude ‘that towards the end, Eleanor “was so repelled by him … that he used chloroform to have relations with her. It is easy to understand why she took her own life”’. (Introduction, 27, citing a letter from Maria Mendelson to Vera Zasulich, 1898)

The Introduction provides a succinct summary of both the complex political landscape of the British Left in the last decade of the nineteenth century, including the development and ideologies of the Democratic Federation, founded in 1881 (Social Democratic Federation, from 1884), the Fabian Society, founded in 1884, and the Independent Labour Party (ILP), founded in 1893; and the ‘relentless squabbling’ ( Introduction, 6) amongst all the leading figures in the socialist movement, including Marx and Aveling, but also Engels.

The editors also provide detailed and informative references/footnotes, both to the Introduction and to the ‘letters’ themselves. Although I am not qualified to judge the accuracy of the translation, by Francis King, this too would appear to be professionally undertaken and accurate: he has certainly rendered the text of the ‘letters’ both readable and accessible.

But what of the ‘letters’ themselves? What are the main topics of concern and, more importantly how significant are they in the overall development of British socialism? The first ‘letter’, January 1895, sets the tone by plunging straight into the detail of the London School Board elections, and the nature of the debate over ‘religious instruction’ in schools. The discussion then moves on to consider the contrast between the school leaving age of 13 for working-class children, with the fact that upper-class children began their public school education at the same age; the poor equipment provided at Board (state) schools, and their wholly inadequate sanitation and ventilation; and the absence of mixed sex educational provision. Important as these issues were for those active in British socialist politics, it is surely debateable whether even the most Anglophile of Russian readers would have found such ‘parochial’ matters of riveting interest. Indeed, the authors themselves seem to recognise this. As they observed: ‘In case English political events are not of all-consuming interest …’ (69) There then follows a very positive review of Thomas Hardy’s Life’s Little Ironies. (This was almost certainly written by Marx, Hardy being one of her favourite authors.)

Similar events, interesting enough in themselves, but hardly of major significance for the international socialist movement, were described and analysed in subsequent ‘letters’: the elections to Parish Councils, and the welcome ‘disappearance from rural life, as far as it is reflected in parish council elections, of the clergymen who had previously played such a prominent part in village affairs’. (letter two, February 1895) After condemning the rise in both child mortality and local government corruption in London, resulting in slum dwellers being ‘both physically and morally sick’, and detailing some examples of ‘depressing and horrific’ conditions in the workhouses, the authors nevertheless claim that the London County Council (LCC) ‘has to an extent tried to relieve poverty’. (82)

In the same ‘letter’, they also discuss the continuing problems of poverty and famine in Ireland; and the death of Robert Louis Stevenson, aged 44, ‘an incomparable storyteller’, who was ‘close to genius’. (91-2) A similar mixture of content is evident in letter three, April 1895. A discussion of the LCC elections, and the iniquitous role of the City of London, is followed, inter alia, by an account of the struggle to gain public access to Lincoln’s Inn Fields; the Harcourt Inquiry into unemployment; and the minimum age at which children should be allowed to work in factories.

Letter three concludes with an extended discussion of the Oscar Wilde trial. The authors note that the notorious Marquis of Queensbury, Wilde’s antagonist, was known not only as ‘a sportsman who laid down the classical rules of boxing’, but also as ‘the only titled agnostic’. In this latter role, the Marquis interrupted a play which he considered to be mocking agnosticism, causing something of a fracas. Marx and Aveling were in the audience and noted that they were ‘quite unable to say which we enjoyed the most – the stupid play or the impromptu protest from the box and the subsequent undignified scene.’ (120) Such ‘light relief’ items are scattered throughout the seven ‘letters’ and, whilst often entertaining, underline the point that the ‘letters’ are more a fairly superficial survey of current affairs than serious political analysis.

Another theme running throughout the ‘letters’ is the polemical criticism of not only Conservative and Liberal politicians and policies, but of other figures prominent in the socialist movement. In particular, the authors attacked Keir Hardie and the ILP, and Annie Besant, often unfairly, as the editors indicate in some detail in their perceptive footnote comments. There are some vivid observations about the turbulent, day-to-day politics of the mid 1890s, including the blatant nepotism evident in Lord Salisbury’s administration in 1895. However, of greater significance in the longer term was the authors’ analysis of the increasing divisions in the Liberal Party, between the old, aristocratic Whigs, and the younger Radicals, amongst whom the young Asquith was prominent. (201ff)

Of particular relevance to contemporary concerns are the authors’ observations on two issues: immigration; and feminism and the ‘women’s question’. Comments on the latter are almost certainly those of Marx. On the question of the immigration of ‘destitute workers’, it is noted that many working-class people would like Parliament to enact legislation ‘forbidding what they call the immigration of paupers’. However, the authors strongly oppose such solutions, arguing that ‘the most enlightened and far-sighted workers object on the basis of their class interests to such measures’. Rather, ‘the real way’ to deal with these problems is to secure ‘greater justice in relations between employers and their employees, whether natives or foreigners’. (224) The authors went on to note approvingly that the Sailors and Firemen’s Union had adopted a ‘completely opposed resolution’. (225)

Marx made several references in the ‘letters’ to the ‘women’s question’, and more generally to women writers. (on the latter, see in particular letter five, 189-91) In general, her view was that of the traditional socialist: social class was the determining factor in the political struggle. To advocate a feminist perspective, even to foreground the ‘women’s question’, was at best diversionary. ‘In art, as in sociology, there must not and cannot be “a woman question”’. (189) Whilst such an approach jars with contemporary feminist perspectives, it is noteworthy that some prominent ( female) left-wing socialists of the twentieth century have held similar views – Joan Maynard, the leading left-wing Labour MP and champion of the agricultural workers, for example.

What then, finally, is the value and significance of this publication? Certainly, it adds to our understanding of both the day-to-day affairs of ‘formal politics’ in the England of the 1890s, and it rehearses the colourful lives and personalities of Marx and Aveling. Moreover, as noted, the book is well-edited, with scholarly and informed footnotes; and it is ‘a good read’, conveying something of the atmosphere on the political left of the time. However, it adds little to our understanding of ‘post-Marx’ Marxism, nor does it provide political, theoretical or philosophical insights into the more general development of socialist thought and action. It is thus an interesting but minor addition to the history of the British Left in the late nineteenth century.