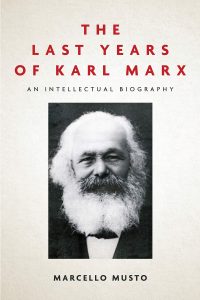 There has been a gaping hole in studies of Karl Marx leaving out the last few years before his death in March 1883. Despite the recent revival of Marx studies, this ‘forgotten chapter’ of his life has remained in the shadows, until now with Marcello Musto’s informative and well-crafted book, The Last Years of Karl Marx. (This English edition is an excellent translation, by Patrick Camiller, ‘with new sections and some changes’ (xii) from the widely translated Italian original of 2016.)

Musto’s book is an intellectual biography that fills gaps in Marx’s thinking, prompting new ideas, appreciation and understanding of Marx in his late life, while also casting light on important parts of his earlier work. Marx was not, as is often thought, a great man who withered away because of ill health and family deaths, but a genius who could not stop pursuing old ideas, sometimes in unchartered territory, in spite of those troubles. The book is about an ‘unknown Marx’ but also about an enriched and more fully understood Marx, whose lifelong intellectual work was, as Marx said, in the pursuit of ‘struggle’. (9) Musto does admit that his own work has ‘limitations’ because of the ‘complexity’ of Marx’s work in his final years.

Materials that have lately become available are used to advantage by Musto, but mostly he has used what has long been available to us all. There is no excuse for the neglect of this critical period in Marx’s research and thinking. (Musto does note, however, that ‘these new materials definitively refute the idea that he was mainly driven by a new philosophy of history, or that he had obsessive recourse to the dialectical method’ (151, n86).)

In The Last Years, we learn about Marx’s opposition to Eurocentrism, racism, rigid theorizing, economic determinism and historical schemas. Marx had a lively and intense way of thinking about the material world and diverse societies. As Musto observes, ‘[t]he critical spirit with which Marx composed his Capital reveals just how distant he was from the dogmatic author […] that many presented to the world.’ (93) What can seem a kaleidoscope of thoughts comes from a constancy of thinking about human diversity, as we can see in this investigation of Marx’s late researches into the richness of science and the development of foreign countries.

The interest of Marx’s late intellectual life is heightened by Musto’s clear and sympathetic portrayal of the troubles and turmoil of Marx’s last years, including death and illness in the family. ‘The last period of Marx’s labours was certainly difficult, and often tortuous, but it was also very important theoretically.’ (137, n73) We hear about Marx’s desk and his study filled with books, notebooks and manuscripts; about his walks and visitors; and about his demeanor and personality (cf. 11-19). These interwoven observations of a personal biography provide a backdrop to the account of Marx’s intellectual vitality and depth.

Musto sets out to show that ‘Marx thought the study of new political conflicts, new themes, and geographical areas to be fundamental for his ongoing critique of the capitalist system. It enabled him to open up to national specificities and to consider the possibility of an approach to communism different from the one he had previously developed’ (5).

For Marx, the study of society was a science, an historical science. His ‘unquenched intellectual curiosity’ led him to extensive studies of chemistry, physics, physiology and geology (23), as well as his continuing investigations of political economy. But it was his interest in the social sciences that drove him to study the ways and developments of sciences generally. The perceived success in the nineteenth century of the natural sciences spurred on his investigation of the material world of society through political economy and history, following his materialist conception of history.

As Musto observes, Marx ‘escaped the trap of economic determinism’ and ‘did not share the rigid schemas suggesting an inescapable sequence of stages in human history. Marx spurned any rigid linking of social changes to economic transformations alone.’ (32f) Ideas from British, or even European capitalism, were also not to be simply transferred to India, Russia or elsewhere.

Musto is firm, but perhaps too cautious, in remarks against the strong currents that reject Marx’s nineteenth century materialist and scientific aspirations, apparently on the basis of pre-nineteenth century conceptions. What is shown is that Marx was strongly focussed on the material conditions, especially in production, for individual freedom and collective agency that drove the struggle for change. He studied the data about the economic conditions that provide ‘[s]cientific insight into the inevitable disintegration […] of the prevailing social order’ (37), as Marx said in correspondence in 1881.

Musto has many interesting observations in ‘New Research Horizons’ (ch. 1) about Marx’s prodigious work during his last years. He was thinking about international orgnizations and about a variety of countries, including the United States, Britain, France and Germany. There are also attacks on ‘panacea-mongers’ (39) and ‘stupidities such as a minimum wage fixed by law’ (45). There was familiar rhetoric right to the end.

His well-known and little understood interest in Russia was a central topic in his last years and is rightly given an important chapter in Musto’s study. We learn a lot about Russia in the late nineteenth century and about what Russian socialists were then thinking. Some of that thinking was misled by what became canonical, and allegedly, ‘Marxist’ thinking about Marx’s materialist conception of history. Marx, according to Musto, does not depict a methodology or schema or system – these were alien to Marx.

The canonical, so-called, ‘theory’ came from over-extending the use – not by Marx nor by Engels, but by others – of the ‘guiding thread’ that Marx mentioned in reflections on his work, which had been focussed on Europe. The guiding thread was a schema of progressive epochs with their distinctive structures of the base, the relations and politics. Marx was explicit about the five stages – Asiatic, ancient, feudal, modern bourgeois capitalism and then communism – while also being clear especially about the structure of bourgeois capitalist societies.

Marx regarded himself as engaging in a scientific analysis of Europe, and especially England, up to the mid-nineteenth century. He did not always say, but he was frequently explicit, that he was writing about Europe and not producing a system that would apply to all history and all societies. Marx’s materialist conception of history was not a theory, but an approach to history through material beings in the material conditions of their society. Not even the guiding thread for the studies of Europe was a theory but simply, and importantly, a suggested direction for those investigations.

In his last years, Marx looked at the literature on Russia in terms of his scientific investigation. This was not a shift to something like anthropology or journalism or just simple reading. Throughout his life he pursued scientific studies with a materialist conception of history and whatever guiding thread might fit the new material. There were not changes in Marx’s work, except for the change of application to other societies using the same materialist conception of history and perhaps different guiding threads.

There were those who agreed generally about Marx’s account and then supposed a small change in the canonical ‘theory’ with its path of history in five stages. At least three variations can be considered. One change is that the penultimate stage of capitalism could be greatly sped up, shortened and thus less damaging, because of lessons from developed capitalism elsewhere. This was probably Lenin’s view about Russia. Russia’s early phases of capitalism, in Lenin’s view, could be sped up to late capitalism and then early socialism.

Another change that has been contemplated is that a whole stage could be passed over and thus totally avoided. This might be thought of as a Maoist position about China jumping from agricultural feudalism to early socialism, avoiding altogether the intervening stage of capitalism. Stages can be sped up or completely eliminated.

A third change that can be contemplated is a change in the path itself. It appears, following Musto, that this was something that Marx contemplated. Some societies, Marx thought, may take the different path from collectivist economies (as in Russia) to modern collectivist production on a large scale.

The question from Vera Zasulich in 1881 that prompted this thinking engaged Marx in a variety of thoughts worked on in the multiple drafts of a letter of reply, as Musto relates in detail. Marx considered the possibility of a society with people’s communes (the obshchina) moving to a society with socialist or communist structures. Such possibilities would clearly also depend on the people’s relations and ideas. The very concepts of class, association and struggle would probably have to be adjusted to the times and conditions. Russia would not advance in the image of England, in the way that Marx seemed to have thought that Germany would.

This is a richer materialist conception of history in a way that is true to nineteenth-century (as well as, modern) scientific ways, not using Hegel’s (or other philosophers’) schemas, but instead collecting data and developing ideas. There may be some inevitability, but not rigid thinking. Like a true scientist, Marx constantly had doubts, not because he wanted certainty, but because he pursued clarity and depth of understanding.

Musto’s book is a valuable resource about Marx and his thinking in the early 1880s. But we also learn, in the course of this study, more about Marx’s earlier and most read work. Moreover, as Musto concludes, ‘[t]hose who look through Marx’s writings […] today […] cannot but be fascinated by the capacity of his socio-economic analyses to explain the world. Nor can they fail to be impressed by the message that radiates incessantly from the whole of his work: organize the struggle’ (125).