Marx & Philosophy Review of BooksReviews‘Georg Lukács’s Philosophy of Praxis: From Neo-Kantianism to Marxism’ by Konstantinos Kavoulakos reviewed by Sean Ledwith 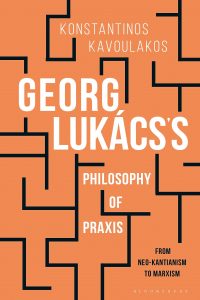 Three years ago, the quasi-fascist government of Victor Orbán in Hungary approved the removal of a statue of Georg Lukács from an urban park in Budapest. Shortly after, a priceless archive of the great philosopher’s correspondence and notes that had been stored in his riverside flat by the Danube was rendered inaccessible, also on Orbán’s orders. The fact that one of the most notoriously reactionary and racist regimes in Europe should see fit to vindictively move against the legacy of one of the great intellectuals of the last century is a stark reminder of both the threat from the right and the potential value of Lukács’ ideas in fighting back against Orbán and similar politicians around the world.

The great Hungarian philosopher’s legacy has been discussed within the revolutionary left since the publication of his pivotal volume History and Class Consciousness in 1923. In his lifetime, Lukács was subjected to denunciations from the Stalinist establishment in both his own country and the USSR, matching the ravings of Orbán in terms of hostility and vitriol. In this highly stimulating volume, Konstantinos Kavoulakos cites the attack on History and Class Consciousness at the 1924 Comintern Congress that described the work as guilty of a deviation that should not be ‘tolerated without punishment’ (4). Even among more sanguine commentators on the left, such as Adorno and Habermas, Lukács has been called out for allegedly propagating a messianic idealisation of the working class that lacks grounding in the materiality of social and economic conditions (6).

Kavoulakos summarises the pejorative assessment of Lukács’ legacy among many other Marxist thinkers: ‘Lukács’ theory of class consciousness is unavoidably led to a metaphysics of history, to a purely idealist […] approach to society and history, whose characteristic autonomisation of consciousness and subsequent voluntarism are totally incompatible with orthodox dialectical materialism (165). History and Class Consciousness is conventionally interpreted as one of the pioneering texts of Western Marxism from the 1920s that utilised Hegelian dialectics in an attempt to turn away from the economic determinism which had characterised the Second International and increasingly came to infect the Stalinised Comintern. The author sets out here to reclaim Lukács from the persistent accusations of messianism and voluntarism that are aimed at History and Class Consciousness. Kavoulakos innovatively suggests that although Hegel was indubitably a major influence on the young Lukács’ conversion from romantic anti-capitalism to Marxism at the end of the First World War, an equally decisive role was played by the South West German school of Neo-Kantianism in which the philosopher was immersed beforehand.

Sustained analysis of the role of thinkers such as Heinrich Rickert and Emil Lask on the pre-Marxist Lukács, Kavoulakos posits, have been neglected in previous commentary and is essential to an updated, more nuanced reading of arguably the greatest Marxist philosopher of the twentieth century. In the author’s words: ‘The aim of this book is to show that a more charitable approach to Lukács philosophy of praxis is much more interesting, coherent, and fruitful than the unfounded and theoretically unproductive prejudice that prevails in a great part of the critical intelligentsia today’ (9).

As well as underlining the contribution of the Neo-Kantian school to the politics of History and Class Consciousness in the first section of the book, the author also explicates on other contentious aspects of Lukács’ oeuvre, such as the seminal concept of reification, the dialectical qualities of nature and the role of the revolutionary party. The result is an outstanding defence by Kavoulakos of the ongoing power of the Lukácsian perspective on contemporary processes within capitalism and a compelling re-assertion of how it can help us grapple with the crises of our time. His characterisation of the mind-set many feel during the current conjuncture is painfully apposite:

All too often we react as if everything that is happening is nothing but a bad dream or as if it did not concern our own life. After all the dominant thought and science, but also the established political discourse and social and political practices keep repeating the sane story; What is happening is inevitable, it is the result of objective necessities, there have always been difficulties or even; we have already seen worse (225).

Bourgeois politicians in Lukács’ time and ours have consistently peddled the reified notion that capitalist relations of production are irreversibly embedded in society. Kavoulakos persuasively argues that the philosopher’s engagement with pre-WW1 critiques of Kantian epistemology emerging from the influential Heidelberg school of thinkers paved the way for the theory of reification as outlined in History and Class Consciousness. Kant famously sought to differentiate the immutable and transcendental categories of understanding from the fluctuating content of cognition as we experience it in our everyday interactions. Two of Lukács’ fellow academics at the time identified significant antinomies in the Kantian paradigm. Heinrich Rickert rejected the problematical bifurcation of the form and content of our experience of the world by arguing the categories must be intrinsically attached to ethical values.

Emil Lask took an alternative direction and developed a response to Kant’s delineation of the thing-in-itself as a perpetually inaccessible realm of knowledge by focusing on the historicised nature of so-called objectivity. Kavoulakos makes the case that these two critiques of the Kantian transcendental subject inexorably led the young Lukács towards Hegel’s theory of knowledge in which form and content are entwined in a dialectical unity. The author does not claim that Lukács uncritically absorbed these Neo-Kantian perspectives, but he does assert their influence on History and Class Consciousness has been underestimated by previous scholarship. The critiques developed by Rickert and Lask in the years before 1914, the author states, played a crucial role in Lukács’ later theorisation of how capitalism inculcates in the minds of subjects in all social classes a reified notion of its own immutability. The South West German school set Lukács on the path to constructing his own critique of Kantianism which would be accelerated by the social and political radicalisation that accompanied the outbreak of war: ‘By turning to the post -Kantian attempts at classical German philosophy to transcend the antinomies of bourgeois philosophy Lukács did not search for an insuperable model of thought but […] he attempted to locate the shortcomings of even these attempts in order to find a possible alternative’ (3).

In the second section of the book, Kavoulakos excavates other influences from the pre-Marxist phase of Lukács’ career on the notion of reification. Georg Simmel and Max Weber were also key influences on his thought while studying literature and philosophy in Germany. The former developed a conceptual critique of how money erodes social relationships in capitalist society, while the latter developed an even more influential analysis of how the rationalisation associated with modernity effected the decline of pre-industrial notions of community and enchantment. Kavoulakos argues Lukács’ radicalisation by the Hungarian Communist Party at the end of the First World War provided the additional intellectual ingredient that allowed him to supplement these non-socialist critiques of capitalism to the one provided by Marx and construct the theory of reification: ‘He thus attempts to synthesise Marx, Weber and Simmel’s theory of social rationalisation. In Lukács’ eyes, what these three theories of modern society have in common is the attempt to analyse it with respect to the predominance of a formal, calculative form of rationality that abstracts the particular, qualitative, individual nature of things and subjects’ (122).

The contribution of these critical but non-Marxist commentators to an understanding of the processes of capitalist society enabled Lukács to crucially avoid the economic reductionism that had taken over the upper echelons of the Second International on the eve of the catastrophe of 1914. The notion of reification was crucially orientated around how all aspects of consciousness under capitalism are permeated by commodification, not just those explicitly affected by economic considerations. The Neo-Kantians in Heidelberg, along with Simmel and Weber in Berlin, collectively led Lukács towards his pivotal focus on totality as the defining feature of Marxism, rather than the economistic caricature that was associated with the more influential socialist thinkers of the era such as Karl Kautsky and August Bebel.

Remarkably, Lukács developed the concept of reification with its revolutionary analysis of how even our psychological and social interactions are saturated with commodified modes of thinking before the publication of Marx’s 1844 Manuscripts which contained the comparable concept of alienation. This shift away from purely economic explanations of capitalist crisis is Lukács’ greatest contribution to Marxist philosophy and the reason he received the ire of the Stalinist hacks of the Comintern. As Kavoulakos puts it in his rigorous analysis: ‘Thus, instead of a mechanistic explanation of the genesis and functioning of capitalism, in Lukács we have a holistic presentation of the fundamental form of objectivity that permeates the relation of bourgeois society to nature, the relations between men, as well as the relation of man to himself’ (118).

In the third part of this sophisticated re-evaluation of the Lukácsian paradigm, Kavoulakos confronts a familiar criticism from within the revolutionary left that History and Class Consciousness posits an idealist agenda that suggests the mass transformation of proletarian consciousness alone provides sufficient cause for socialist revolution. The author carefully dissects how Lukács’ discussion of the operations of reification implies no such thing and that his famous exhortation for the actuality of revolution is entirely compatible with materialism: ‘Only now, the issue is no longer about the individual but the collective praxis; the only one that allows the possibility of a harmonisation of subject and object, form and content, freedom and necessity. The mystical ethics has now been replaced by a theory of the conscious political practice of the self-determination of a collective subject’ (160).

Contrary to the accusations of thinkers such as Althusser and Adorno, Lukács does not argue socialists merely need to generate anti-capitalist ideas among the working class for a revolution to occur. The transformative praxis of such a political moment must also be aligned with economic and social ruptures developing immanently within the capitalist mode of production. Kavoulakos also helpfully brings this robustly dialectical aspect of Lukács’ thought to the fore by noting that the multiple crises that the ruling class are now inflicting on humanity in the twenty-first century makes the great philosopher’s perspective even more relevant. To conclude in Kavoulakos’ own words: ‘It has been further enriched through dimensions that were not central or even present at the time of the first great socialist revolutions: ecological demands for the preservation of the biosphere, feminist and antiracist initiatives, antiwar movements and groups for the defense of otherness in all its forms that acquire new significance in view of unprecedented immigration currents’ (236).