Marx & Philosophy Review of BooksReviews‘Philosophers on Film from Bergson to Badiou: A Critical Reader’ by Christopher Kul-Want (ed) reviewed by Eduardo Frajman 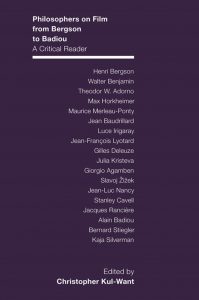 Christopher Kul-Want (ed)
Philosophers on Film from Bergson to Badiou: A Critical Reader

This collection was conceived and edited by an experienced teacher with the classroom in mind. Though the volume should be of interest to ‘those who want to know what philosophers have said about cinema and film’ (1), its target audience is primarily philosophy students. For the rest of us, interested lay readers not under the tutelage of editor Christopher Kul-Want, this is both a bad and a good thing.

Bad, because the pedagogue presents the material with the expectation that the reader/student cannot understand it without help (as a teacher of philosophy and humanities, I can attest that, for most students, this is a completely legitimate expectation). Kul-Want offers much help, perhaps too much. In a thorough introductory section, he lays the contextual groundwork for an understanding of films not simply as works of art, but as reflections of the times and social milieus in which they are made. He expounds on the changing philosophical approaches to film as the social role of the form mutated throughout the twentieth century, from its genesis as the quintessential ‘public entertainment’ (3) to its sidelining by television, to the present time, in which (even before the Covid-19 pandemic) most film watching occurs at home and in private. Kul-Want takes the time to explain the interests and theoretical approaches of each author, which is useful, but then repeats much of the same information at the beginning of each individual chapter. Some of the chapter intros go to painstaking lengths to clarify any possible source of confusion that may arise from, say, the opaque prose stylings of Jean Baudrillard or Slavoj Žižek, thereby obviating the need to read the primary texts at all, and somewhat robbing the reader of the pleasure of discovery.

Good, because the pedagogical approach gives the collection a clearly defined shape. The essays collected here were all penned by thinkers ‘informed by the continental tradition of philosophy [of] Germany and France’ (1) and especially by Immanuel Kant’s Critique of Pure Reason and Critique of Judgment, most of whom ‘either belong to, or have helped shape, the intellectual movements […] known variously as postmodernism, poststructuralism, and postphenomenology’ (2). Leaving aside the somewhat grudging inclusion of an excerpt from Henri Bergson’s Creative Evolution in the leadoff position, the works form an ongoing conversation that stretches from Walter Benjamin’s ‘The Work of Art in the Age of Its Technological Reproducibility’ (chapter 2) to Alain Badiou (chapter 16) and Bernard Stiegler (chapter 17), with two excerpts from Gilles Deleuze (chapters 8 and 9) as the clear midpoint (The last chapter, by Kaja Silverman, engages in this conversation as well, but feels tacked on and minor compared with the lineup of heavy hitters that precedes it.). These authors discuss almost exclusively European and North American films, though ‘global’ masters such as Akira Kurosawa and Abbas Kiarostami are occasionally brought up. Kul-Want claims he made his selections ‘as much for their ongoing currency as for their historical significance’ (2), but the book shows no interest in the significance of the era of the blockbuster or the current moment, when the film industry is dominated by fantasy fare and superhero adventures. For analyses on Bollywood or the Hong Kong film industry, and on how non-Western philosophical approaches may or may not affect the construction, content and understanding of cinema, the reader has to look elsewhere.

The texts can be roughly divided into three categories. There are those that theorize on film as either (or both) a representation of how human beings experience the world and a potential tool to transform such experience. Benjamin begins by positing that ‘social reality is entirely coexistent with, and interpenetrated by, technology’ but also proposes ‘that such reality can be freed from the oppressive uses of technology.’ ‘In this respect’, as Kul-Want summarizes Benjamin, ‘film has various roles to perform with respect to technology: it has the capacity to capitalize on the decay of the fetishism surrounding the work of art’s aura and to liberate new forms of reception and expertise among the masses the counter ideological repression’ (45). Clearly inspired by Benjamin, Maurice Merleau-Ponty (chapter 4) proposes that ‘film has the capacity to create affects that transcend its material substance and narrative content that audiences respond to at intuitive, phenomenological levels issuing in the body rather than cognition and understanding’ (100), while Luce Irigaray (chapter 6) hopes that film can ‘open up to reflection and thought in the spaces between the characters, isolated each of them in their moments of pause, waiting, or perplexity, and revealing, often despite themselves, their inconsistencies or capacities for transformation’ (125). For Deleuze, ‘cinema decenters space to the point that a direct expression of time is produced’ (152), while for Giorgio Agamben (chapter 11), ‘both cinema and philosophy have a duty to awaken’ a ‘gesture’ that opposes ‘the paralyzing power of the auratic image’ (209). Jaques Ranciére (chapter 15) sees in film the potential ‘to create a resistant – that is, dissenting – otherness beyond prescribed forms of identity and reason’ (272), much as Badiou sees the potential for films to be ‘of such maximal intensity that they can overturn the prevailing order of discourse, in turn, inaugurating new and unforeseen worlds of experience and knowledge’ (291), and Silverman (chapter 18) identifies its power to ‘disclose the rationality of the world through form of analogy’ (329).

A second category includes those essays more heavily influenced by Theodor W. Adorno and Max Horkheimer (chapter 3), who maintain that all ‘cultural production […] is an integrated component of the capitalist economy’ and that film, especially, constitutes ‘an industry that no longer has any pretense to art and which obeys the same rules of production as any other producer of commodities’ (81). Baudrillard (chapter 5) continues this line of analysis and concludes that ‘Marx’s theory of alienation is no longer relevant for theorizing the subject under capital today. The marketing power of consumerism has become absolute, with the consequence that the metaphysical dichotomy of a false self alienated from an authentic self [is outdated] for contemporary purposes’ (114). Both Jean-François Lyotard (chapter 7) and Stiegler engage in Marxist analyses of the ‘culture industry’, but they offer more optimistic assessments than their predecessors. While Lyotard is quite aware of film’s role as a tent pole of the ‘entertainment industry’, he nevertheless argues that it is possible to engage in ‘a critical reevaluation of film in terms of its approach to the issue of movement, [which] should take precedence over’ political concerns (137). In a similar vein, Stiegler admits that films work ‘largely in the interests of instrumental Capitalism as controlled by U.S. global industries’, but believes that the form occasionally can also be ‘an inspirational force of life’ (309).

The third category includes those works that essentially engage in philosophically-minded film criticism. Julia Kristeva (chapter 10) is interested in film not as political tool but as representation of political mood in her analysis of Hiroshima mon amour. Žižek (chapter 12) considers the nature of horror in Alfred Hitchcock’s Psycho, Jean-Luc Nancy (chapter 13) the ‘phenomenology of deferral and becoming’ (242) in the films of the Iranian director Abbas Kiarostami, and Stanley Cavell (chapter 14) the representations of women in the Hollywood comedies and melodramas of the 1930s and 1940s.

The collection indubitably accomplishes its main goal: to encourage a philosophical approach to film, one that urges skepticism and criticism of what one is given onscreen, but at the same time curiosity and even awe at what this advanced technological way of making art can come up with. On the other hand, given its almost complete disinterest in our current age of popular moviemaking, it is unlikely to engage with a younger audience raised on Netflix and Disney Plus. It is admirable that Kul-Want wants his students to know the names and work of Orson Welles, Jean-Luc Godard and Federico Fellini, but it is somewhat off-putting that a book on film published in 2019 does not contain the names Scorsese, Coppola or Spielberg in its index, not to mention Paul Thomas Anderson, the Cohen Brothers or Bong Joon-Ho, or any single female filmmaker, for that matter. The collection risks making film seem like a historical relic, rather than a living art form, perhaps the only art form that is still capable of capturing a truly global audience, a fact that indubitably has both philosophical and political import.