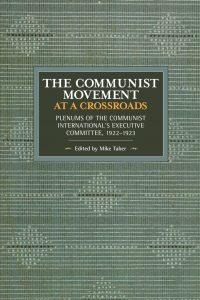 Mike Taber (ed)
The Communist Movement at a Crossroads: Plenums of the Communist International’s Executive Committee, 1922-1923

The Communist Movement at a Crossroads documents discussion of the fundamental issues of revolutionary strategy and tactics, many of which are still relevant today including the question of the United Front, Workers Governments and the fight against fascism. The plenums documented in the book are meetings of an enlarged executive committee of the Communist International that were held between the main World Congresses, the first four of which (when V. I. Lenin was alive) have been documented in English in John Riddell’s series. The plenums described by Grigorri Zinoviev as ‘small world congresses’ are of equal interest to the main congresses predominantly organised by the Russian Communist Party, debating and taking important decisions that directly shaped the practice of Communist Parties (and other forces) around the world.

Large parts of the plenums are taken up with discussions around the United Front, an alliance between workers’ organisations, usually reformist parties with Communist parties for the purpose of initiating common struggle. The proposal to form a United Front should be addressed to the leaders as well as members of these parties. If accepted, Communist parties would gain access to a wider audience within the working class and should be able to demonstrate the superiority of both their politics and practical leadership of struggle. If the offer for an alliance is rejected by reformist leaders, this demonstrates to the working class that the Communists are interested in unity while the reformist leaders are putting their own narrow interests above working class needs. A United Front in no way entails fusion with reformist parties or a reduction in the ability of Communist Parties to put forward independent politics. The United Front was originally portrayed primarily as a defensive tactic to fit a period in which the revolutionary wave had receded, and the ruling class was on the attack. In these plenums, the United Front is put forward as a general tactic to gain majority working class support for Communist Parties. Communist leaders were conscious that many working class people had a spontaneous desire for unity and that the Communists, having split away from previously unified parties, would appear as sectarians. Far from being an invention of the Communist International’s leadership, the United Front can be found throughout Bolshevik history. The temporary alliances between Mensheviks and Bolsheviks, Soviets being multi-party organisations of the working class and peasantry, the Bolsheviks key role in organising the resistance to the Kornilov military coup against the provisional government (despite the same government jailing Bolsheviks), are all examples of the United Front in practice. Use of the United Front led to growth in size and prestige of most parties within the Communist International. A unified conference even took place in Berlin in 1922 involving representatives of the three Internationals: the second, third and what was known as the two and a half international of centrist organisations that balanced between the established reformist and revolutionary forces. Implementation of the United Front was uneven and various issues arose when turning theory into practice.

The Communist International by default contained Communist Parties of varying sizes and implantation within the working class, operating in varied political terrains regarding both the form of the state and their left wing ‘rivals’. At one end of the spectrum was the Bulgarian Communist Party that was declared to have majority support of organised workers, and at the other end the British Communist Party had around 10,000 members and was just beginning to win respect in the wider working class. The majority of the parties fell in between these two polls. Opposition to implementing the United Front came predominately from the French and Italian sections. The French party claimed, as they were substantially larger than their reformist rivals the Socialist Party, that they did not need an alliance with them. Rather, the only alliance favoured was a ‘revolutionary front’ with the Syndicalists. The French and Italian parties emerged from reformist parties worried about being contaminated with ‘opportunism’ if they were to form an alliance with these forces. The debate highlights the balancing act of relating to large radical left-wing forces and those currently to the right of the Communist Party simultaneously. The danger of failing to apply the spirit of the United Front is highlighted by the case of the Bulgarian Communist Party taking a disastrous stance of ‘neutrality’ between a reformist peasant party government and a right-wing military coup, describing the situation as one of inter-capitalist rivalry.

Some confusion around the United Front policy was created by the Communist International itself. The creation of the Red International of Labour Unions (Profintern) helped to organise opposition to attacks on the Soviet Union and win over individual anarcho-syndicalist leaders to Communism and draw closer large syndicalist organisations. On the other hand, the Profintern could be portrayed relatively easily as an attempt to split trade unions despite the intentions of the Communist International leadership, allowing the Second International to capitalise on the ambiguity of this organisation.

Flowing from the United Front policy, the Workers Government slogan featured heavily across the plenums; it was proposed and discussed in an often contradictory manner. For some, the Workers Government slogan meant a call for workers parties to form a government which the Communist Party would critically support from without, the main example being the German Communist Party’s (KPD) support for a government made up of the Social Democrats (SPD) and Independent Social Democrats (USPD) in Saxony and Thuringia. For others, the slogan meant a parliamentary coalition in which the Communist Party would take part while maintaining its independence. Lastly, Zinoviev called the Workers Government a more popular way of describing the Dictatorship of the Proletariat, something he would later retract from reports of speeches. Most of the debate seemed to miss the ambiguity in how the slogan was presented, instead focusing on whether the slogan was applicable at all for certain countries or the necessity of changing the slogan for a Workers and Peasant government to for a Workers and Poor Peasant Government.

Despite somewhat strangely appearing in the trade union section of the agenda, the two most astonishing contributions were made by Karl Radek and Clara Zetkin on fascism. Radek’s speech focussed on the death of the German nationalist martyr Albert Leo Schlageter, a member of the Freikorps that was charged with blowing up a railway in opposition to the French occupation of the Ruhr. Despite its criticism of Schlageter, the speech portrays him as a misguided youth too late to save, however future Schlageters can be won over to Communism from German nationalism. The speech is complete with calls for German patriots to form a front against the French occupation, rhetorical sympathy for the beaten imperialist power Germany and a bid to portray Communists essentially as the real fighters for the nation. This misguided approach of undercutting nationalist appeal by attempting to outdo it led to the short lived ‘Schlageter line’ of joint meetings between German nationalists and KPD members. Zetkin’s speech in comparison is a masterful combination of analysis and concrete proposals. As the editor of the collection, Mike Taber points out that this ‘plenum should be recognised as the site of the first major discussion in the international Marxist movement on the causes and nature of Fascism’ (21), pre-dating Leon Trotsky’s classic analysis by some years. Zetkin points out the mass character of fascism as contrasted to other forms of authoritarian regimes, describes the social forces involved and its appeal to sections of the working class without ever losing sight of the sheer violence of the movement. Particularly interesting is Zetkin’s description of fascism’s appeal to some of the most ‘energetic forces’ (603) within the intellectual community, something that must be countered with the ‘overriding grandeur of Communism as a world outlook’ (603). Zetkin calls for an ideological, political and military struggle against fascism, central to which is a United Front of armed self-defence groups based in the factories and the wider working class. Throughout Zetkin’s speech runs the idea that Communism must have greater vision and initiative than its deadly enemy fascism, a theme taken up by Zinoviev as central to the whole plenum and summarised in the concept of ‘Will to Power’.

Nietzsche’s concept of ‘Will to Power’ seems a strange slogan to raise within the Communist International. Zinoviev was not arguing that intellectuals and then humanity on a whole has a desire to dominate or that existence is determined by a vital energy. Nor is Zinoviev arguing for a reformist notion of gaining parliamentary power, a fraction of the power within capitalism, by seeking a coalition government or even a parliamentary majority. Rather, ‘Will to Power’ in this context can be seen as an earlier conception of Antonio Gramsci’s version of hegemony. Zinoviev calls for Communist Parties to abandon the posture of an ‘extreme proletarian opposition’ (653) within bourgeois society and adopt the mentality of a movement coming to power to found society anew. Gramsci’s concept of hegemony means working class leadership of society, incorporating the demands of allied classes (usually the peasantry), the military defeat of one’s enemies and the resolution of the multiple crises of capitalism. It is not an accident that Gramsci’s journal was named New Order (L’Ordine Nuovo). Similarly, Zinoviev’s ‘Will to Power’ is based on seizing the initiative and the dynamism of Communism as a movement. Through tactical shifts and temporary defeats, Communist Parties must never lose sight of the aim of the seizure of power by the proletariat. The Communist Movement at a Crossroads is a vital edition to our understanding of the International Communist movement at its revolutionary height.