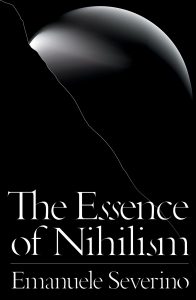 Emanuele Severino
The Essence of Nihilism

How does one write a review for a book such as The Essence of Nihilism? Within the author’s home country of Italy, the book is considered a philosophical classic, akin to Hegel’s Phenomenology of the Spirit or Heidegger’s Being and Time; and like these works, The Essence of Nihilism will be studied by generations of philosophers. Within it lies a uniquely original and compelling philosophical discourse, and because of this, it can receive high recommendation. Emanuele Severino is a philosopher par excellence who stands alongside the brightest philosophical minds. Yet attempting to read The Essence of Nihilism without familiarity with classical/Pre-Socratic philosophy or ontology, will undoubtedly result in a struggle, and as such a little preliminary research is highly encouraged. It is also very unfortunate that this translation has opted to remove the sections ‘Reply to the Critics’ and ‘Reply to the Church.’ Given that at present there are no English translations of these sections, Verso has done a little bit of a disservice for those interested in the full work. The restoration of these sections in a second edition, or have them available online, would be an amendment worth pursuing. But what are the contents of The Essence of Nihilism and why should Marxists read it?

The Essence of Nihilism is, after an introduction, divided into three parts. The first consists of Severino’s foundational essays ‘Returning to Parmenides’ and its ‘Postscript’. This section is the most important of the book and lays down the foundations of Severino’s ontology. Part Two is comprised of four essays that broaden the implications of the first and demonstrate how Western civilization has alienated itself from what Severino designates as the ‘Truth of Being’. Part Three consists of one essay titled ‘Aletheia’ which ties together many of the themes from Parts One and Two and deals with the non-contradictoriness of Being and self-contradiction. The book then finishes in a concluding remark indicating how certain topics, such as Severino’s thoughts on human freedom, evolved throughout the course of his career. But what is it about Severino’s thought that makes him such a philosophical force? Unlike Heidegger, who saw in ancient Greek philosophy an interpretation of Being as presence, Severino, through an investigation of Pre-Socratic philosophy, comes to a radical interpretation of Being that unravels the ontological foundations of philosophy and stands in total opposition to Western thought. Severino’s philosophy turns on the original meaning of Being and nothingness that was bequeathed to the world by Parmenides: Being is, while nothingness is not (36). For Severino, this is both the supreme law of ontology and the law of non-contradiction itself. Being for Severino is a force that absolutely repels non-Being; at no point does that which ‘is’ become that which ‘is-not.’ Thus, all Being exists by necessity. But Severino does not make the same fatal mistake as Parmenides by stating that only Being exists, while the world of becoming does not. Instead, he attempts to solve the Parmenidean problem of the One (immutable Being) and the Many (determinations of Being) without abandoning the original meaning of Being. Severino exhaustively argues how both Plato and Aristotle betray the original meaning of Being to salvage the Many from the One. Here, it is the great Plato who committed a great parricide of Being by only allowing the forms to exist by necessity, and thus rendering all other aspects of the determinations of Being consumed by time and become nothing. Severino argues that all philosophy since Plato, with the belief that Being is susceptible to time, has been constructed with the conviction that Being can become nothing. For Severino, this is the very essence of nihilism.

To overcome the nihilist conviction that Being can become nothing, Severino understands Being as the totality of differences. All manifest determinations, i.e. all that ‘is’ (every idea, feeling, object, person, etc.), is Being; and if it is Being, then it must exist by necessity, i.e. it is eternal. Being for Severino is the positive which can never become the negative (nothing). Thus, becoming cannot be an oscillation between Being (positive) and nothingness (negative) as other philosophers have maintained, but is instead an oscillation between two positives: Being as immutable and Being as it is manifest as coming-to-be. For Severino, all the eternal manifestations of Being dwell eternally within a transcendent immutable realm which abstractly manifest themselves within this universe which he calls the ‘horizon of appearing’. Being is not created or destroyed but is perpetually appearing and disappearing, forever maintained within the hospitable immutable realm. Severino identifies this transcendent realm as God and this horizon of appearing as God’s reflection. But do not be thrown off by the theological language. God for Severino is not a divine intelligence that creates, but is instead the totality of differences. All that appears, no matter how large or infinitesimal, is an eternal limb and part of God. Thus, all that exists is sacred and eternal.

But why should this philosophical discussion be of interest to Marxists? If Severino is correct, then Marxist ontology is built on the false conviction that Being can become nothing. In Capital, Vol. 1, labor, in its metabolism with nature, leads things from non-Being into Determinate Being. Marx gives us examples such as wood, gaining its Being from the chopping of the tree by the woodcutter, or the mineral extracted from its vein by the miner. Labor for Marx confers ‘the form of Being,’ and this conferring identifies Being with nothingness. This is because, without the efficient cause of labor, the manifest determinations which appear from human activity would not-be. For example, the wedding band which now rests on my finger is-not (is nothing) before labor conferred Being upon it. Without labor, this wedding band would not be. The Being of the wedding band in the instance of its creation is emerging from non-Being into Being. For Marx, labor can as well confer non-Being. If, for example, I decided to melt down my wedding band, my labor would bestow non-Being upon it since the unity of the band would be no more. The Being of the wedding band in its destruction becomes non-Being. Determinate Being in Marx’s thought is identified with Nothingness because 1.) Marx posits that without the efficient cause of labor its ‘products’ would not be; and 2.) Marx understands that Determinate Being dwells solely within time. Thus there is a time when its Being is not (the past) and then there will be a time where its Being will not-be again (the future). Marx then understands the becoming of Being as an oscillation between Being and Nothingness. For Severino, here lies again the fatal mistake. If something exists, it is Being; and if it is Being, it is eternal, i.e. exists by necessity. So, to posit that there is Being which is dependent on an efficient cause is to betray the very meaning of Being, because it posits a type of Being which does not exist by necessity. This is both an ontological and logical contradiction for Severino. Thus, to posit a determinate Being dwelling solely within time is absurd because that would mean there is Being which becomes nothing, i.e. Being which is consumed by time. Therefore, all the manifestations of determinate Being must dwell eternally outside of time since they cannot not-be. The becoming of Being then cannot be between Being (positive) and Nothingness (negative) because this is ontologically impossible. Instead, for Severino, if becoming is to be understood, it must be as Being that is manifested as coming to be (positive) and immutable Being (positive). To return to our previous example, the wedding band resting on my finger appears within this horizon of appearing. It is not as it is in-itself as immutable, but as manifest as coming to be. Every moment in which this wedding band appears already eternally dwells within the transcendent hospitable realm of immutable Being and is abstractly appearing and disappearing from the horizon in which Being appears manifest as coming-to-be. The wedding band is not then brought forth from non-Being into Being but is being ‘reflected’ from the immutable realm of Being. It is appearing within this horizon of appearing as an abstract manifestation of Being which comes-to-be. Thus, nothing can confer Being or non-Being, not God, nor labor. Labor then is not a conferring of Being and Non-Being. Instead, it must be understood that each act of labor which abstractly manifests and disappears is an eternal act that necessarily brings about the appearance and disappearance of every eternal determination of Being which ‘belong’ to it within this horizon of appearing. This means that every act of labor, like every act, has already been committed insofar as it dwells within the transcendent realm of immutable Being and every product of labor already exists insofar as it dwells within the transcendent realm of immutable Being. Every act of labor and every ‘product’ of labor is Being, and their becoming, like all Being, is an oscillation between immutable and coming-to-be. One could point out the plethora of work by Marxists who have criticized eternal formalizations of labor, but one must understand that these past formalizations commit the same ontological mistakes that Severino is criticizing. Labor in these cases is an eternal immanent activity which confers Being and non-Being. Thus, one cannot use these critiques to discredit Severino’s position, since it is a position already critical of these formalizations.

But why should Marxists take Severino seriously? Since time immemorial philosophy has understood that the status of Being governs the status of truth. Severino exhaustively shows how philosophy since Plato has been operating on a false interpretation of Being, which has guided Western civilization into its furthest alienation from the truth of Being. Like Galileo, Severino stands in opposition to the madness of a mistaken belief by which the world has been consumed, and with the full might of philosophy shows that Being cannot become non-Being. This should be sufficient reason on why Marxists should take seriously the ontological stakes of The Essence of Nihilism.