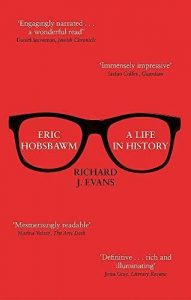 It is entirely fitting that a life as long, productive and interesting as that of Eric Hobsbawm – the renowned Marxist historian who died in 2012 – should be celebrated with a biography that is certainly long but also fascinating and illuminating. Late in his life, Hobsbawm wrote an autobiography that is full of details about his voluminous works but said little about the man himself, his motivations and his inner emotional life. As Evans notes, Interesting Times, Hobsbawm’s commentary on his own life, has been described as ‘a curious hybrid, an impersonal autobiography’ (ix). By contrast, this biography focuses particularly on his inner life and the experiences that were associated with them, while in no way neglecting his intellectual and political development. Hobsbawm certainly lived through some interesting times and witnessed first hand some of the most important events of the twentieth century, and this encouraged him to see his life as being shaped by the times he lived through. But this biography seeks to explore the ways in which his intuition as a historian was shaped not only by the political and historical context but also by his own circumstances, commitments and passions. By the time of his death at the age of ninety-five, Hobsbawm was the most widely read historian in the world, not only in the English-speaking world, but in many other countries. His books have been translated into some fifty languages – with sales in Brazil alone reaching close to one million – and almost all of them remain in print to this day. He was also an important spokesman for the left, not only in Britain but also in countries such as Italy, Brazil and India, and for many years his political activities resulted in continuous surveillance by MI5. This biography is rich in its exploration of his works, their influence in various quarters, the controversies that they engendered and the criticisms that were made of them, but also succeeds in allowing us to see how they grew out of the man and his lived experience. Evans, a Regius Professor Emeritus of History at Cambridge, also provides an instructive commentary on the role that the study of history can play in the development of ideas and political movements.

Eric Hobsbawm was born in 1917 in Alexandria, Egypt, where the British-run Egyptian Postal and Telegraph Service employed his father. But by the time he was 14, both his parents had died, and he went to live with members of the extended family, first in Vienna and then in Berlin. Evans’ account of this early chapter in Hobsbawm’s life is valuable because it allows the reader to understand the process by which a young radical developed a set of beliefs and passions that were to guide him throughout the rest of his life. In Berlin he saw first hand the rise to power of the Nazis and like many who lived through those events, he became convinced that the only force capable of countering this evil was the Communist Party, and so began an association that survived until the final breakup of the British Communist Party. This was also a period in which the families supporting Hobsbawm experienced bouts of real poverty, and this also haunted him throughout his life. Later, the need to provide adequate support for his own family and children became a very powerful motivator: the choice of topics for his books was certainly based on his own intuitions but was influenced by what he thought would sell well and thus provide a steady stream of royalties. Similarly, he was also dogged in his search for foreign publishers who would translate his work for a wider audience, and took a particular interest in the percentage of sales that they were willing to hand over.

If Hobsbawm’s movement into the Communist Party is easily understood, his later relations with British Communism were more complex, and this biography sympathetically counters some of the – to my mind – unfair judgements that have been made about Hobsbawm’s moral stances, or lack of them. It is often asked why he remained loyal to a Party with which he had such a stormy relationship. Always critical of the Stalinist positions adopted by the Party, Hobsbawmwas faced with particular moral crises after the Soviet invasions of Hungary in 1956 and of Czechoslovakia in 1968. Large numbers of members left the Party in protest, and many people criticised Hobsbawmfor his refusal to follow them. He never resigned, but the Party itself was dissolved, having already split into Eurocommunist and Stalinist groupings. This biography spends quite a lot of time seeking to understand the reasons for this dogged loyalty in spite of everything. In an interview with the BBC, Hobsbawm asserted that he did not want to be associated with the sort of people who had left the Communist Party and become anti-Communist: to leave would be to betray his old friends and comrades, many of them now dead, and some killed by their own side. Communism had been for him and these friends a dream of the liberation of mankind, and of the poor in particular. This was a worthy aspiration, one worth fighting for, and he was reluctant to be branded as someone who had lost the faith. Not everyone will agree with this logic, but it does have a certain strength of purpose and one that certainly fits with the man that emerges so vividly from this biography.

Indeed, he was not entirely sorry to see the end of the Soviet system, about which he felt that all illusion had long gone. Rather, he lamented the end of the dream of which the Soviet Union was ‘the nightmare version’ (547). He believed that the fall of the Soviet system had marked the end of Leninism, not the end of Marxism in which he never lost faith, but in the British situation of that time he favoured a broad alliance of the left to counter the neoliberal agenda of Margaret Thatcher: indeed, for much of his later life he worked closely with the Labour Party.

Two particular fears for the political future of the world were to motivate much of his work in his later life, and both the emerging contexts for these concerns – both of which are related to the fall of the Soviet Union – are explored in fascinating detail. In what Evans claims has proved to be one of his most prescient predictions, Hobsbawm was convinced that it was highly unlikely that in Eastern and Central Europe the end of Communism would herald the rebirth of liberal democracy, but rather the rise of authoritarian regimes – and so it has proved in Hungary and Poland in particular. He was also fearful that nationalism – which he vigorously opposed – would also emerge strongly. Much of his earlier work had been criticised for its lack of adequate attention to the importance of nationalism: for example a review by the eminent American economic historian David Landes of The Age of Revolution, which Evans quotes at some length and describes as both ‘brilliant and combative’ (475), lamented that while Engels had explicitly recognised the impact of nationalism, Hobsbawm had underestimated its force. Meeting such criticisms head on, Hobsbawm published in 1990 Nations and Nationalism Since 1780, which proved to be one of his most popular and influential books. Earlier in life he viewed nationalism as a form of bourgeois class politics, but he now saw it as a kind of identity politics, ‘reflecting the breakdown of class allegiances rather than articulating them’ (552), and as Evans notes, the events since 1990 have again proved him right. In this book, Hobsbawm seeks to entirely dismantle the case for nationalism. Its rise in post-Communist Eastern Europe demonstrated in his view that crude identity politics appealed to a population that had been denied political education and experience by years of repressive rule and were searching for some sense of certainty in a disoriented world. He argued that it might be possible to derive something positive from the undoubted force of nationalism, be he refused to be a nationalist.

As the title of the biography emphasises, Eric Hobsbawm’s life was very much a life in history, and it is very instructive in various parts to understand how he saw the role that history, and historians, can and should play in society. As a committed Communist he felt in the early part of his life that he should take part in revolutionary activities, but as he matured he recognised that he did not have the requisite organisational skills, nor in fact the physical courage required for leadership. However, he felt that in his role as a historian he was able to make an important contribution: he described himself as a ‘guerrilla historian’ marching directly ‘behind the artillery fire of the archives’ armed with ‘the Kalashnikov of ideas’ (658)! Some commentators have questioned whether the influence of his Marxist beliefs can really be detected in his writings and more general approach to history, but as someone who has read and learned from Eric Hobsbawm over many decades, I certainly have no doubts. Not only did he write beautifully, and in a clear style accessible to the general reader, but his breadth of vision and his unerring ability to see how individual events fitted into a much larger picture bear witness to his learning and skills as a Marxist intellectual, and this splendid biography illuminates his truly enormous contribution.