Marx & Philosophy Review of BooksReviews‘Changing the Subject: Philosophy from Socrates to Adorno’ by Raymond Geuss reviewed by Adrian Kreutz 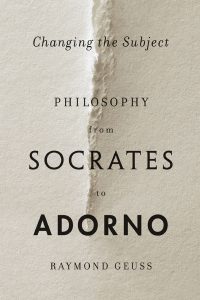 Raymond Geuss
Changing the Subject: Philosophy from Socrates to Adorno

A grizzly bear attacks you. How do you react? Of course, you do your very best to defend your life and wellbeing. But at what moral cost? Imagine you have good reason to think that the bear won’t let go unless you cause it considerable pain. Perhaps you may even need to kill the bear in order to save your own life. Prudence demands you killing the bear – imagine it is the only effective way of protecting yourself. You may however think that killing animals is morally wrong per se. You now enter a philosophical dilemma: the moral ought tells you to refrain from hurting the animal; the prudential ought tells you to protect your own life and wellbeing; the two oughts are in conflict. How do you resolve this conflict? Some philosophers have argued that only an external ought can make a definite statement to the effect of deciding whether one must, when in a situation of metanormative conflict, heed morality or heed prudence. We can call this, the ought-simpliciter (cf. Baker 2018 and Copp 1997). The ought-simpliciter is a higher-level ought and thus cannot be identical to either the moral or the prudential ought. But in order to explain why the ought-simpliciter has normative supremacy it seems like we must again refer to yet some higher-level normativity. This, i.e. philosophy, will lead us nowhere.

We could of course try to resolve this philosophical conflict by extra-philosophical means. We could for instance study the biology or psychology of our actual ad hoc reactions to grizzly bear attacks. This however comes down to changing the subject, leaving the precincts of philosophy behind. Raymond Geuss disagrees: changing the subject, ‘that is what––or at any rate that one thing that––philosophy has been.’ (xiii)

Geuss’ definition of ‘philosophy’ reminds me of Saussurean semiotics: philosophy is what emerges when something transitions from one system to another. Here is an example: Saussurean interpreters of Das Kapital think that surplus value is what is created by the transfer of a commodity from one system of exchange to another system of exchange (cf. Karatani 2020). Philosophy is like surplus value. ‘Philosophy takes place’ where there is a ‘change in the subject’ (5).

As systems change or, rather, historical situations change, philosophy changes with them. The problems of philosophy are not eternal questions, but social problems thrown up by history itself, Geuss argues. Philosophical theories are ‘connected to the societies in which they arise and flourish’ (204). For Geuss, the great were subject-changers of old were Socrates, Plato, Lucretius, Augustine, Montaigne, Hobbes, Hegel, Nietzsche, Lukács, Heidegger, Wittgenstein and Adorno. To be a philosopher is to be a subject-changer. In Changing the Subject, Geuss devotes a chapter to each one of those subject-changers.

The chapter on Augustine makes clearer the idea of philosophy being a ‘change in the subject’. Augustine famously followed Plato in his commitment to natural law: law stands in an intimate relationship to morality – ‘unjust laws are no laws’ is a well-known slogan. Morality itself, Augustine thought, is an opaque metaphysical notion to which mortals have only limited epistemic access. Unlike Plato, however, Augustine payed attention to actual historical events when making this claim. He moved away from the ahistorical subject of the Republic and towards ‘the constitutive role of history in human life’ (102). According to Geuss, this change in the subject is where philosophy ensued.

Changing the subject is sometimes (but not always) a matter of responding to predecessors and departing from their positions. Departure (of whatever kind) is in the essence of philosophy. Departing is to challenge the assumption that previous philosophers have taken ‘relatively firm’ (252). Wittgenstein prominently departed from his own earlier assumptions. His early work, the Tractatus, makes an apodictic statement of language being #the picture of the world’ (255). In his later work however, Wittgenstein changed the subject. He departed from the everything-can-be-said-clearly approach and moved towards the messy reality that is ordinary language philosophy.

What Wittgenstein did to language, Nietzsche did to ‘the self’. According to Geuss’ rendition, Nietzsche departed from preconceived Cartesian wisdom: the self is not a ‘psychic unity’ but rather ‘a mass of constantly shifting’ impulses (192). The contingency that emerged from Nietzsche’s definition of the self, which made possible the solitary will-to-power, positions him in stark opposition to Montaigne, says Geuss, for whom the community is constitutive of the self, and for whom there could never be something like a solitary will-to-power.

Hegel shattered the naiveté of Montaigne’s communalism. Hegel changed the subject – he philosophised – when he turned Montaigne’s system towards actually existing communities, says Geuss. Adorno, roughly one hundred years later, philosophised once again when he criticised Hegel for not having been capable of bringing the material and conceptual into a stable relationship that serves human emancipation. Adorno changed the subject once again; away from Hegel’s unexamined holism and towards what is in fact a ‘false’ totality (282).

Each of those subject-changers discussed established a new system of thought on top of another system of thought, making significant changes to the old system. Whenever a question could not be answered with the (philosophical) tools available at the moment, either some spatial or temporal fix­­ – a change in the subject – did the job, kept philosophy alive, or, as Geuss would put it, established the preconditions of philosophy itself.

The bar for ‘changing the subject’ must however be rather low. In various ways, Geuss’ renditions of Socrates, Plato, Lucretius, Augustine, Montaigne, Hobbes, Hegel, Nietzsche, Lukács, Heidegger, Wittgenstein and Adorno each address the issue of how to conceptualize a well-ordered mode of existence, which is conductive to social cohesion and stability. In other words, each and every subject-changer addressed is described as facing Bernard Williams’ ‘First Political Question’ (Williams 2005). Each subject-changer is portrayed as a political thinker. The fact that politics somehow binds together this illustrious circle of thinkers can make us wonder if Geuss might have been a little too quick to conclude that all philosophy is about ‘changing the subject’.

Geuss’ discussion of Lukács provides yet another noteworthy perspective on the philosophy-qua-subject-change thesis. He describes Lukács’ perspective on the Leninist vanguard as follows: in a world of conflict, one must choose sides­­ – ‘no one should expect either side to be without guilt’. If the proletarian vanguard is the only place where ‘coherent social thought and action’ is possible, then one must be a member of the party, ‘even if this requires heroic sacrifice.’ (223) To call the emancipatory endeavours of the proletariat and its (vanguard) party ‘irrational or even arational’ would be, according to Lukács, ludicrous. Individuals may step outside history, says Geuss, but if they do ‘it was a decision arising from desperation and leading nowhere’ (224). Stepping outside history, which we might say is a way of changing the subject (the burden of proof is on Geuss to say why it is not, if it is not), must thus be considered an a-philosophical act, according to Geuss’ logic. Unless, of course, philosophy is actually leading us nowhere. Is it?

Geuss opens Changing the Subject with a reference to Ingmar Bergman’s historical fantasy film, The Seventh Seal. There we learn of a knight who upon returning from the Crusades awaits his death from the plague. When the personification of Death arrives, the witty knight challenges him to a game of chess, gambling for his life. The knight first tries to checkmate Death, but he fails. When Death checkmates the knight, the knight ‘accidentally’ knocks over the pieces on the chessboard. Death, however, knew about this feeble strategy, replaces the pieces on the board in right order, and wins the game. Philosophy, says Geuss, is knocking over the pieces on the chessboard, changing the whole framework of the game.

Death, we can take from this parable, is nonetheless inevitable – and taking this parable seriously, so is the eventual death of philosophy. Geuss’ history of philosophy is yet another of those clichéd, prophetic ‘end-of-philosophy’ narratives. What is worse, Geuss’ history of philosophy can itself be straightforwardly read as a philosophical hyperbole of philosophical nostalgia, a longing for a time and place when philosophy (as Geuss’ conceives it) had a distinctive role to play in world-history. Nineteenth century France, says Geuss, was a time and place in which philosophy didn’t prosper (although a time and place of great advances in the arts). The anglophone world of the twenty-first century (since 1968) is yet again a slice of space-time in which philosophy does not thrive, Geuss laments (clearly haunted by the spirit of Adornoian negativity).

Geuss’ original question, which gives the whole book its overarching Adornoian ambiance, is asking: ‘Is it better to be satisfied in Santa Barbara; or to be dissatisfied in Leipzig?’ Adorno would have rejected this question as ill-formed. ‘In the modern world, although you may not realise it yet, there is no cure and no escape: everywhere is California”. This is a bland, classic Adorno, but Geuss here makes an invigorating remark: the question is ill-formed not only because California-is-everywhere, but also because of its ‘Eurocentrism­––something that would not actually have been of concern to [Adorno] but which might bother us’ (293.).

If Marx seemed too obvious a choice for Geuss’ defiant cause, why didn’t he introduce Marxist thought through Rosa Luxemburg (rather than Lukács), discuss Hannah Arendt (rather than Heidegger), or Nagarjuna (rather than Socrates)? The idea that ‘if Socrates had died during the retreat at Amphipolis, […] there might well have been nothing like what we know as “philosophy”’ (298), conceals the fact that, not long after Socrates, in the golden age of Indian philosophy, for instance, people practiced something surprisingly similar to ‘philosophy as we know it’. If philosophy is really all about ‘changing the subject’, future histories of philosophy would benefit from, well, changing the subject.