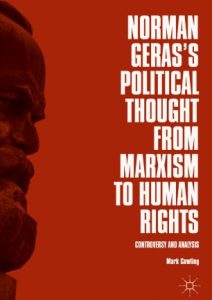 William Hebblewhite is an independent researcher. He received his PhD from Macquarie University in …

Norman Geras (1943-2013) was a prolific author, activist and cricket fan. He wrote widely on a variety of topics including Rosa Luxemburg, Trotsky, Marx, justice, human nature, liberalism, post-Marxism, the holocaust, torture and humanity. He was on the editorial board of New Left Review between 1976 to 1992 and also Socialist Register from 1995 to 2003. His contribution to Marxist theory cannot be understated. Yet, in later years he felt a growing distance between Marxism and his outlook. This is captured in a short self-reflective essay entitled ‘What does it Mean to be a Marxist?’, published shortly before his untimely death in 2013. In this essay, Geras identifies three ways by which someone could identify themselves as a Marxist: personal, intellectual and socio-political. Geras informs his reader, that to be a socio-political Marxist, as he puts it, ‘to belong to the Marxist left’, is no longer ideal. He writes: ‘here is a way of being a Marxist that no longer recommends itself – I am sorry to say that to be a member of the Marxist left today is to be part of something, a body of opinion, a political current, that is accursed’ (Geras 2013: 18).

For Geras, the values of international Marxism were no longer his values. Marxist organizations, today, grip tenaciously to an ideology that stands shoulder to shoulder with anti-democratic, reactionary and oppressive organizations, all in the name of dogmatic anti-imperialism. For Geras, Marxism today overlooks the barbarity with which it aligns itself, as if one of its central tenets is to uncritically accept the adage that the enemy of my enemy is my friend. Geras’ brutal assessment of the Marxist left reveals a difficulty that many academic-types have in being members of Marxist organizations, simply, how do you balance the critical endeavor of philosophy – and the implicit ideal of moral progress that is at its core – with a political ideology which identifies the history of the world with the struggle for dominance. This critical question presents us with a prism with which to read Mark Cowling’s Norman Geras’s Political Thought from Marxism to Human Rights. It is an exacting analysis of Norman Geras’ work, from his early treatments of Rosa Luxemburg and Leon Trotsky, to his critiques of Althusser, Richard Rorty, Ernesto Laclau and Chantal Mouffe, as well as his analyses of the concepts of justice and human nature in Marx’s work. Cowling provides an exhausting reconstruction of Geras’ arguments, which in a sense, may help us come to terms with how one of Britain’s great theorists moved away from Marxism.

The book consists of twelve chapters, each focused on a singular aspect of Geras’ work. After a short introduction that offers nothing more than a direct summation of each chapter, the book deep dives into Geras’ most important contributions, all presented chronologically. The content of each chapter differs widely. We are treated to chapters detailing Geras’ analysis of figures such as Luxemburg (ch. 1), Althusser (ch. 3), Ernesto Laclau and Chantal Mouffe (ch. 8) and Richard Rorty (ch. 9); to Geras’ interpretations of Marx and human nature (ch. 4) and justice (ch. 6), as well as broader topics of Trotskyism (ch. 2), morality (ch. 7), modernity (ch. 10) and crimes against humanity (ch. 12). The book presents a critical analysis of the total of Geras’ contributions to political theory – and that alone makes it an important contribution to our understanding, not only of Geras’ journey but the journey of Marxism in the twentieth and twenty-first centuries. That someone so invested in the minutiae of Marxist theory could become so despondent with its practical message in his later years may hold lessons for what we as Marxists today ought to be doing and thinking about. This however is not the point of Cowling’s book. Rather, his is a critical exposition of Geras’ most prominent pieces, and each chapter works to a rhythm presenting an exposition of Geras’ position before Cowling presents his own critical analysis.

While Cowling presents a significant analysis of Geras’ intellectual contributions, there is a real lack of critical assessment of the latter’s treatment of thinkers such as Althusser, Laclau, Mouffe and Rorty. Occasionally, we might like to give Cowling the benefit of the doubt and assume that the focus ought to be entirely on Geras. But in many ways, Geras’ work in the 1980s and 1990s culminated in a defense of Marxism and enlightenment values against what he saw as the postmodernist incursion. The chapter on Althusser is a case in point. Cowling demonstrates quite well Geras’ reconstruction and critique of Althusserian Marxism. He notes that Geras’ gripe with Althusser’s anti-humanist interpretation rests on whether Marx produced a theory of human nature. Geras had previously argued in Marx and Human Nature (1983) that those who oppose the humanist reading of Marx tend to focus on a few subtle lines in Theses on Feuerbach. Geras himself argues that the sixth thesis on Feuerbach, on which most anti-humanists focus, could possess a variety of meanings, none of which entirely make sense if read in isolation from Marx’s other work. For Geras, one needs to turn to The German Ideology to place Marx’s theses in their proper context. Whether Geras or Althusser is correct in this regard might be a matter of a certain form of Marxology. The concern however is that Cowling presents Geras in this regard as the only reasonable interpretation. There is very little discussion of whether Geras’ claims pass his test for textual supportability – and critical analyses, which would include assessing Althusser’s claims, is not present. Cowling himself makes the case that ‘it would be possible to say a very great deal more about Geras’s criticisms of Althusser’ (83), but that such analysis would be ‘exceedingly lengthy’. The same can also be said of the chapters on Laclau and Mouffe, and of Richard Rorty; though in defense of Cowling he cites Laclau, Mouffe and Rorty in those chapters – whereas poor Althusser’s work is only mentioned vicariously through Geras’ writings. This may be because Laclau and Mouffe took the time to respond to the criticisms mounted by Geras. This leads to what we can take to be the major pitfalls of Cowlings’ book. While an excellent examination and analysis of Geras’ work, it does little to engage in critiques of Geras from others. There is the strong assumption, perhaps unfairly, in Cowling’s words that Geras could do no wrong, and that any criticisms of Geras merely reinforce Geras’ claims – rather than contribute to a wider discussion regarding the pathways that Marxism and social democracy might take.

At the end of the book, Cowling notes that ‘Geras essentially ended up as an egalitarian liberal. There is nothing wrong with being an egalitarian liberal, but there is a much greater distance between this and his youthful Trotskyism than Geras perhaps realized’ (201). The difficulty in this statement is that it underlines a particular issue regarding the unity of Geras’ thought and the unity of Cowling’s book. It is difficult to assess what ties together Geras’ prodigious body of work, from his exegetical accounts of Luxemburg and Trotsky, to his critical encounters with Althusser, Laclau, Mouffe and Rorty, as well as his work on justice, morality and human nature. By extension, it is difficult to assess how Cowling’s book can be read as a cohesive whole. Indeed, Cowling makes no such attempt to think in these terms. Each chapter is presented as a singular aspect of Geras’ intellectual career. There is little to suggest, besides some cursive remarks regarding justice, why Geras went from a particularly astute reader of Luxemburg and Trotsky to abandoning Marxism wholesale. Perhaps this search for a unifying philosophy within Geras’ work is not what Cowling is looking for with the publication of his book. Perhaps the goal is rather to assess each of Geras’ encounters on its own merits. Readers should not then feel bad about picking and choosing which aspects of Geras they align with – and leaving the rest by the wayside.

To end on a more positive note, Cowling’s book contributes to the small, but growing and much-needed emphasis on contemporary figures of Marxist thought. Marxist scholarship tends to look to the past for its theoretical inspiration, rather than the here and now. But perhaps what is needed is to take more seriously the contemporary discussions of Marxism, and its relation to the rest of the political milieu. And on that account, the book is a success. It is an informing, critical and balanced assessment of Geras’ philosophical excursions, if nothing else. While critical of Cowling’s approach, this reviewer thinks such assessments of contemporary figures are important for discussions of how Marxism has developed, and why so many of our leading lights gave up on the project. Norman Geras’s Political Thought from Marxism To Human Rights does exactly what it says on the cover, and perhaps that is all we might ask of it.