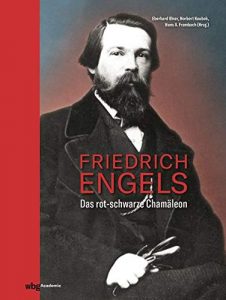 This lavishly illustrated volume celebrates Engels’ recent bicentenary in 2020 and also the 125th anniversary of the death in 1895. The wealth of illustration is astonishing and very much in the grand tradition of German colour-publishing. However, its pricing, while not at paperback levels, is not far off. WBG Academic is a noted scientific publisher, though also a book club for subscribers. So with that background and that kind of specialisation we are offered a view of Engels’s world not hitherto available to English readers.

Indeed I am rather tempted to describe the book as a breakthrough precisely because of its panoply of visual content, far in excess of what we usually see in the Marx-Engels world. Until this volume there has been little curiosity to go much further than the few contemporary images of the two, and then only to portraits of associates, a wife or mistress, very occasionally to ancestors, and in Marx’s case, to descendants, and then contextual excursions to shots of a house or two. Most of the images here are unfamiliar, and all are beautifully reproduced.

This substantial volume is more closely aligned with exhibition catalogues than art books, except that – over and above the descriptive captions – we get twelve very substantial scholarly essays. The textual content of these chapters is such as one would find in a first-rate scholarly collection, covering a wide range of topics, each in great detail. The research ranges from Engels on warfare at sea (‘General’ to ‘Admiral’) to his editing of the second and third volumes of Das Kapital, and an overview of his lifework as publicist and agitator based on a holograph handlist of 1891. We get exceptionally thorough accounts of economic theorising before, during and after Engels’ early essay, but from the (and indeed his) German perspective, as well as a run-through of his views on all aspects of American society, industry and politics as he encountered them. I am hopeful that an English translation can be arranged for the scholarly chapters at least, if not for all the images, given the volume of permissions that republication would require, as well as the expense of producing a book to a similarly high standard.

As the editors explain, the book emerged from a lengthy cooperative and collaborative project based at the Bergische Universität-Wuppertal, which enjoys a campus perched on a hill high above the river valley so familiar to Engels. However, the editors take the illustrated-curated format somewhat for granted. That is probably because for many years the Engels-Haus Museum in Wuppertal also housed the local museum of industrialisation. Thus for many locals or visitors, the substantial houses of the Engels family clan, occupied over quite a number of generations, are not themselves the major sight to see. In that context Friedrich Jr. didn’t fit himself into the community and remain there, as his forebears and relations and their descendants had generally done. Hence he didn’t contribute properly to the intergenerational cascade of entrepreneurial wealth creation and industrial development. His birth house isn’t extant, having taken a direct hit in World War Two. In the local context, moreover, the Engels clan were not the only or the richest Bürger in town, or all that especially significant. They were just another washing/dyeing/spinning little enclave of constantly made-over factory operations that grew up along, and still operate beside, the otherwise unremarkable River Wupper.

This book shows very excitingly how English language studies need to move on. Because the volume proceeds from locally based interests in industrial history, we get a vivid picture of the world that Engels lived in throughout his life. That lifespan was twelve years longer than Marx’s, so we get taken through the 1880s and 1890s with considerable vigour. And because the book focuses almost exclusively on Engels, we engage with his particular lifelong interests in technology and science, industry and urbanisation, presented in the book as something of a visual avalanche. From its pages we can walk with Engels through sights familiar to him, and we can see them through his geeky interests and obsessions. In that way we are liberated from tying illustrations to what he mentions in his texts. This volume is not insisting that the texts determine what we see. Engels’ field of vision informed his published works, unpublished manuscripts and notebooks, and certainly his letters, not the other way round. He could see, hear and smell a lot more than he wrote down, and visually we can now share this.

While the visual material in this volume follows the content of the scholarly chapters, it also breaks out into really helpful contextualisation of the subject-matter, political issues and relevant personalities. Thus we get a much wider framing through which to understand what is being said by Engels and by his scholarly commentators. The numerous images of factories, workers, industrial districts, transport, even engineering diagrams and drawings, swamp the portraits and occasional book covers to which even illustrated biographies stick. This tactic also bursts out of strictly biographical chronology, because Engels understood his industrialising world in historical, indeed developmental terms. We can sum that up as technological progress and class struggle politics, but having it laid out visually – from Arkwright and Stephenson to Taylor and Ford –the reader really gets a sense of what Engels’ world looked like, and of his mind’s eye in making sense of it.

The various types of images curated for the volume mirror this revelatory eclecticism in what we see there, including etchings, engravings, early types of photography, photographs and paintings. Paintings, of course, are dramas, and highly germane to the aestheticised and politicised vision that shines through Engels’ work. These views are integrated with twentieth century reception when the great men were fictionalised visually by the Soviet and East German regimes. In all these illustrations, Engels’ field of vision stretches from his early teenage mention of an exciting ride on the then very new Liverpool-Manchester railway – the world’s first steam-hauled, passenger train, inter-city service – to his personal visit to newly operative hydro-electric plants at Niagara Falls very late in his lifetime.

The editors have curated a mixture of contemporary genre painting, especially German and French, that is fascinating, evidently chosen for contextual interest, rather than sifted by later hierarchies that would cut Engels’ visual world to fit our later tastes. It’s great to see Degas’ view of the New Orleans cotton exchange, painted from personal experience, but even better to see Hübner’s ‘Silesian Weavers’, reproduced here in colour. Engels saw it and mentions its emotional effect in political terms. For him Hübner is ‘one of the best German painters’, and his work is ‘more effective in socialist agitation than 100 flysheets’ – which is really the theme of this review: meaning-making is powerfully visual.

Intellectually the volume captures the sweep of Engels’ experience, looking back to Hegel, Smith, Ricardo and Owen, who were very present in his world, and ahead to Hilferding, Sombart, Schumpeter and Adler, where he was part of theirs. The physical remains of what they were all talking about– generally known now only as industrial archaeology – really comes to life in the dozens of factory scenes and scores of technical diagrams, done at the time with exquisite artistry. Those images might whizz by us in a TV documentary, but with this volume one can really stare at ‘machinery and modern industry’, in Marx’s purely textual phrase, with Engelsian enthusiasm for the real thing.

Moreover there are sometimes clues to biographical work on Engels that hasn’t really been taken up. One of the very standard contextualisations of the early Marx informs us that Rhenish Prussia had been under Napoleonic occupation and thus subject to its liberalising rollback of medieval hierarchies, institutions and exclusions. I found it striking that this book tells the same story about Engels but with an image – we see the printed cover of ‘Napoleon’s Law Book’, published in its official 1810 edition for the Grand Duchy of Berg. The teenage Engels was fiercely liberal in that mode, but unlike the young Marx – in relation to his future father-in-law and others in Catholic Trier – the young Engels had no chance to absorb any of that (quite the opposite) in his sternly Pietistic community and under his family’s stifling anti-intellectualism. Even strictly Lutheran Prussians were appalled at the sect’s fanaticism and intolerance. Engels’ biographers have been in a hurry to get him out of there and away from home, so that he can move on to his destiny, which is to meet up with Marx and make that a success. But clearly there was something going on in the Wupper Valley that wasn’t all authoritarian monarchical-Christian fundamentalism. When young Friedrich at seventeen got to Bremen, the free city and commercial port, he was more than ready for revolutionary liberalism, celebrating annually the very recent French revolution of 1830.

In sum I highly recommend this volume even for those with little or no German – just look at the pictures! It’s another world, but it’s Engels’.