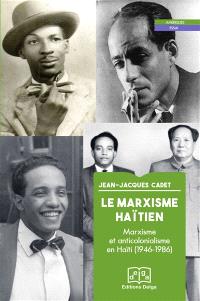 Emmanuel Chaput is a PhD Student in Philosophy at the University of Ottawa, Canada. He has …

Le Marxisme haïtien (Haitian Marxism) is the result of a doctoral thesis and can be seen as the first general introduction to the main Haitian Marxists from 1946 to 1986.

Two things should be taken into account. First, considering the time-period, the author will only incidentally consider Jacques Roumain, author of Gouverneurs de le rosée (Masters of the Dew) and co-founder of the Haitian Communist Party who died in 1944. Nonetheless, as the “first Haitian Marxist” (83), Roumain remains a central figure for all those to come after him. Accordingly, Cadet discusses Roumain more as a forerunner for those who came after. Second, the thinkers considered in the book: Étienne Charlier, Jacques Stephen Alexis, René Depestre, Gérard Pierre-Charles, Yves Montas (aka Jean Luc) and Michel Hector “are all males: it is impossible to trail a feminine presence aside from Ghislaine Rey-Charlier – Étienne Charlier’s wise – whose works are untraceable” (47). The relation between Haitian Marxism and Feminism is not discussed for this reason, even tough Cadet highlights the Feminist inclination of Charlier and Alexis (52). The issue will not be discussed, not because of a lack of interest, but because of the difficulty to gain access to the works in question. Even for Yves Montas (aka Jean Luc), the author underlines the difficulty to find texts other than his main work of 1976: Structure économiques et lutte nationale Populaire en Haïti (Economic Structure and Popular National Struggle in Haiti) (53). Considering those difficulties, the endeavour to present a general synthesis of a Haitian Marxist theory is all the more commendable.

It would however be inaccurate to reduce the Haitian Marxists discussed in the book to mere thinkers. Although Cadet focuses on their theoretical contributions, they all remain first and foremost political activists in a broad sense (from Party and Union leaders to engaged intellectuals). Besides, Cadet’s own time-period is established on political events rather than publication dates, which shows that practical issues overstep theory for Haitian Marxism. Cadet first underscores the role the Communists in the events of 1946 which overthrew Lescot’s government and lead to the rise of Noirisme, the idea that political power should be exercised by the black majority against the ‘mulatto’ elite. Both those who knew and worked with Romain and those who came later were scarred by these events which, while shaking the power in place, ended up promoting a certain populism more divisive than unifying for Haiti. For the Haitian Marxists, “a ‘black leader’ in power does not necessarily imply a left-wing politics for the benefice of the working masses” (138). An assessment in terms of class and social relations must then be set against the impact of a populist rhetoric exploiting the divisions based on a difference of skin tones. History will in a sense prove them right with François Duvalier’s dictatorship which relied on the ‘noiriste’ ideology. The end of the Duvaliers (1986) marks the end of Cadet’s timeline, which is justified since Haitian Marxism established itself theoretically as well as politically in opposition to the Duvalier regime which was so repressive toward communism and union activism. Jacques Stephen Alexis was in fact murdered by the Duvalier regime, Étienne Charlier, driven underground and died suddenly in 1960. For the others discussed in the book, exile became the only option.

From the forced distance of exile, the Haitian Marxists tried to understand the nature of Haiti in Marxian terms, while rethinking Marxism in light of this peculiar case. This is what the author graphically calls “distilling Marxism” (10). It implies taking from Marxism the relevant theoretical components in order to understand a certain specific situation while refusing the elements deemed irrelevant. It also implies to rid Marxism from certain imperfections. In the case of Haitian Marxism, this takes the form of a confrontation with a certain Western Marxism which focuses only on Western industrial capitalism, while neglecting the specific dynamics and implications of colonialism, slavery, racism and peripheral economies.

Cadet establishes three main spheres in which Haitian Marxism ‘distills’ Marxism. The first pertains to the mode of production of the Haitian society; the second, to the issue of colonialism and the Eurocentrism of a certain Western Marxism; and third, to the concept of alienation.

With their attempt to establish the nature of the social configuration of Haiti, the Haitian Marxists tried to complement Marx’s model which focused mainly on Western industrial capitalism. How should we understand the relation between Haiti’s predominantly agrarian economy and international capitalism? The economists among the Haitian Marxists (Charlier, Montas, Charles and Hector) consider Haiti as a “semi-feudal-semi-colonial” society (178). As Cadet writes: “Haiti lacks the necessary institutions to speak of a feudal society according to the proper Marxian terminology […] Nonetheless, it remains dominated by agrarian work” and land rent (191). This is why the Haitian Marxists consider it as a semi-feudal structure. Likewise, although not a colony in any formal sense, Haiti’s “local capitalist economy is nothing but ‘a furnisher of raw materials for capitalist countries.’ Hence its semi-colonial character” (195). In light of Haiti’s socio-economic structure, the Haitian Marxists, partly inspired by dependency-theory, called upon a renewal of Marx’s taxonomy of modes of production which would take into account the role of peripheral societies in the development of international capitalism.

Moreover, they call into question a certain Eurocentrism that Western Marxism was unable to avoid and which subordinates the issues of colonialism and racism to a critique of capitalism essentially understood according to a specifically Western perspective. For this critique, the author underlines the significant importance of both the négritude movement and Castroism. Along with the movement of the négritude, Haitian Marxism highlighted the double oppression endured by black people as they are not only deprived of their means of production, but also suffer from colonial oppression and racism. This is what René Depestre called an “epidermal alienation” (342). On that topic, Depestre’s thought is especially interesting as it shows why “the black man being a twofold victim, deserves a special attention” (337). Négritude’s input, for Depestre, is “the realization of this double alienation and the historical necessity to overthrow it through a revolutionary Praxis” (337-38).

Nonetheless, Depestre remains critical of a certain trend within the movement and goes after “Senghor’s definition of the movement” as he “suspects a certain essentialism in Senghor” (328). The critique is all the more important for Depestre as he observes the political instrumentalization of the movement by Duvalier in Haiti (329). It was as if the noirisme which Depestre had always criticized for its harmful effects for the Haitian society tried to gain a layer of respectability by purportedly anchoring itself in the négritude movement. A travesty of the movement that was, in Depestre’s eyes, made possible by Senghor’s essentialism. Depestre’s ambivalent attitude toward the movement was also influenced by his relation with Castro and Guevara. In Cuba, Depestre discovers a version of Marxism anchored in a “colorless humanism” (27) which nonetheless rejects the Eurocentrism of Western Marxism. As Guevara once said to Depestre: “It is neither in Paris nor in Rome that the important events will unravel: the fate of decolonization will be played right here” (27). The struggle for decolonization will be lead from the periphery, from Latin America to the Congo and Viet-Nam, and this solidarity of the global South should transcend colors. Without denying the West’s historical racial oppression of the black people, the aim was to reconfigure new solidarities beyond the barrier of color differences from the margins throughout the world without resorting to any central (i.e., Western) authority (29).

Finally, Haitian Marxism breaks new ground with respect to Marx’s concept of alienation. Not only do they, as we saw briefly, expose the black man’s double alienation, they also study, inspired by Fanon’s works, its impact of his psyche and behaviour. But what is perhaps the most interesting contribution on the topic is probably Depestre’s concept of ‘zombification’ (362). Not only do we grasp with the concept of zombification the specific character of alienation within a colonial context historically anchored in slavery, but the terminology itself is in a way decolonized since it rests on a term derived from Haitian culture itself (361, 386).

Not only is the zombie deprived of the results of her work and of the ability to decide for herself the purpose of said work, which, following Marx, implies that she becomes estranged to herself, to her fellow man and generic being, she suffers furthermore from “a mental degradation and a physical forfeiture which deprives [her] of [her] very subjectivity” (358). Besides, it is significant that in Haitian culture, the figure of the zombie is intimately associated with the work in the plantations: “In Haitian popular culture, when a plantation is flourishing, we allude to the presence of zombies” (358). With zombification, we would thus have a notion closely related to Marxian alienation, but qualified to account for the specific experience of slaves and colonized people.

This is a significant contribution to Marxism which cannot cloister itself in a dogmatic stance consisting in superimposing a conceptual grid on empirical reality. The author, however, often seems torn between the idea that Haitian Marxism actually establishes itself in opposition to certain blind spots in Marx’s own theory and the idea that it rather seeks, in keeping with Marx, to maintain the dialectical aspect of his thought which implies the need for a constant actualization in light of empirical reality against a dogmatic interpretation of Marx’s theory. It leads to certain inconsistencies in the author’s reading of Haitian Marxism which are at time puzzling. It is all the more problematic since, Cadet never truly confronts his critique of Marx to the latter’s texts on slavery in the Southern States of the U.S. during the Civil War, on the economical function of colonialism for capitalism, or his ‘Letter to Otechestvenniye Zapiski’ on the traditional Russian commune (mir) in which Marx rejects the idea that the transition from capitalism to socialism in Western Europe should be a universal model for the rest of the world, etc. An explanation of Marx’s vision on the role of slavery and colonialism in the development of capitalism and on the possibilities of socialist transition in predominantly agrarian societies would have been welcome to really ground the theoretical and empirical contributions of Haitian Marxism.

The idea is not to downplay the contribution of Haitian Marxism, but on the contrary to highlight how much it remains in tune with Marx, who accused the ‘true socialists’ of forgetting the real human being in the name of an abstract conception of ‘Man’. Similarly, Haitian Marxism seems to make an analogous critique against Western Marxism which implicitly made of the white industrial worker the paradigmatic figure of class struggle against capitalism, and neglected all other forms of struggles for liberation which brought in their wake the possibility of a true critique of capitalism.