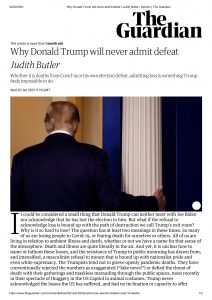 To make my argument more inclusive I will read in this review a series of articles by Judith Butler on the pandemic, beginning with her recent article in The Guardian. Here Butler argues that COVID-19 is not a class issue that effects all workers who must work to live and lack workplace protections and health care, but a racial one as ‘communities of color are most adversely affected’ because ‘white supremacy has now resumed an open place in US politics’. This is a reiteration of her anti-transformative social theory, the basic elements of which she articulated in her essay ‘Merely Cultural’. In that essay she argued that class is not the primary source of social relations but race is. Class, she argued, is ‘lived’ (i.e. it is basically a subjective fact) through ‘race’ (1998: 38). In this familiar narrative, the class politics of the pandemic are racialized and the recognition that white working class people die in the same way and for the same reasons as workers of color is taken to be a denial of the difference of black lives that underwrites an hysterically racist fear of whites ‘being “replaced” by black and brown communities, by Jews’. Butler’s ‘solution’ to the social inequality she has racialized is to psychologize it and in a pop-Freudian language she says that whites must learn to properly ‘mourn’ the ‘historical reality’ of the death of white supremacy and give up the ‘political fantasy’ it represents.

But clearly Butler’s own argument perpetuates the ‘fantasy’ of ‘white supremacy’ by psychologizing it as a racist refusal to face the ‘reality’ of the death of whiteness. Neither ‘blackness’ nor ‘whiteness’ are ontological conditions (essences), but are produced historically under specific material relations through which they come to appear as ‘natural’ and essential justifications for unequal access to the conditions of life. Unequal access to social wealth between whites and blacks in the US are due not to ‘extra-economic’ factors such as ‘white supremacy’, but by the economics of production for exchange in which technological innovation cheapens the value of labour by putting workers in competition with each other over fewer jobs at less pay. The cause of the disparities of outcome in the market is not explained by race but by the rule of profit over production which insures that not everyone will have access to the means to live.

Because the social labour of workers is appropriated by property owners in the form of profit and workers are forced to compete with each other for access to wages to live, not all can be provided with jobs despite the democratic promise of equality and opportunity for all. The capitalist system therefore requires an explanation for why, despite everyone not being able to be given the same opportunity, the wages-system is still the best possible system. Such an apologetic must be grounded in an ‘extra-economic’ reason for it to justify the class structure of the wages-system and in effect must blame the workers for the failures of capitalism. Racism is one such non-explanatory ‘explanation’ for why in a society where there is no objective reason why everyone’s needs could not be met, for health care, housing, physical and cultural sustenance, etc., there is yet mass hunger, mental and physical suffering, and millions go houseless, which says some are more deserving than others because they are made of better ‘stuff’. This ‘stuff’ is the ontological ‘matter’ whose origin is made ‘extra-economic’ in bourgeois theory – whether the essentialized ‘blackness’ of the afro-pessimists (Wilderson, Hartman), or, the mysterious ‘objects’ of the object-oriented ontologists (Harman, Morton), or, the microbial ‘actants’ of the transspeciesists (Latour, Haraway) – to argue for the incoherence of social explanation.

Recently when Butler has turned to address Marx’s theory of class, which it has become impossible to ignore any longer, she makes Marx speak Freud to justify her performative theory of ‘class’ as ‘lived’ (race). She hollows out Marx’s theory of class as the exploitative social relation inscribed in the production process by turning the proletariat, which is the ‘special and essential product of modern industry’ that explains the source of profit and the end of capitalism (1976: 494), into the ‘precariat’, which is a merely descriptive sociological category for ‘the collective for whom work is elusive, temporary, and debt has become unpayable’ (2019). Here again cultural differences among workers that have arisen in the market are used to obscure the social being of the proletariat as the propertyless class which must sell its labour for wages to live so as to increase the value of capital. Despite what Butler says in defense of critical theory against Latour et. al. in this essay, she reconfirms their anti-critical social theory with her own descriptive cultural theory which remains on the surface of the social as ‘lived’ while refusing to inquire ‘into the hidden abode of production’ (Marx 1983: 186), what Latour dismisses as ‘the deep dark below’ (2004: 229). One of the consequences of her rejection of Marx’s critical theory, which explains the experience of oppression in relation to its roots in the daily exploitation of working people, is a surface theory of capitalism. For example, in ‘Capitalism Has its Limits’ (2020), she argues that because ‘the virus demonstrates that the global human community is equally precarious’ it shows that the ‘limits’ of capitalism are ‘spatial’ (i.e. demographically discriminatory). There is in short no core problem with capitalism as the root cause of inequality in production relations (class), only local problems in its unequal distribution of outcomes in the market (race). The unequal distribution of ‘life chances on the market’ (Weber) do not of course have an extra-economic source in ideology (‘white supremacy’), but an economic cause in the logic of exploitation – the law of profit – of class relations.

At the core of Butler’s recourse to universal precarity and mourning lessons is the ontologizing of ‘loss’ that is produced in the relations of wage labour. The only way to adequately respond to the present crises, she suggests, is to accept the loss of ‘white privilege’ as part of the wider ‘precarity’ of ‘all.’ There are those who ‘accept’ loss and appropriately ‘mourn’ and those who do not and are filled with resentment. Loss, however, is not ontological or psychological but historical and material. People lose family and friends unnecessarily due to COVID-19; they lose the ability to pay their mortgages and feed their families; they are deemed ‘essential’ workers and then denied the basic safety equipment to protect themselves as they save the lives of others, etc. – not because loss is the condition of life, as in religious discourses, but because life is conditioned by material relations (property). The people who lose are working people, what they lose is an outcome of their relation to the means of production. Under the relations of wage labour, the lives of those who do not own the means of production are put at the material mercy of those who do. Butler’s gospel of mourning preaches acceptance of economic precarity to the white working class as the precondition for social justice among the already equally immiserated.

Butler’s story in The Guardian about the racial fragility of the white precariat is part of the manufacturing of the new affective condition of capital in crisis. Her writing absorbs class relations into moods and feelings, and reproduces class divisions in its mood(y) cultural politics. It divides the social not according to a material logic (class, exploitation, profit, etc.), but according to an immaterial desire (affect, values, race); between those who attend to and ‘affirm’ their moods (i.e. accept ‘loss’ by reaffirming faith in bourgeois democracy’s commitment to diversity) and those who refuse to do so, ‘negate’ them and become ‘destructive.’ In the new moody cultural divisions, mourning, joy and reconciliation represent the progressive moods, while anger is a right-wing mood. There is no place for class critique in Butler’s woke capitalism except as a form of white ressentiment (Nietzsche). No basis, in other words, for grasping class as an objective social category that explains the universal interest of the global working class in ending their common exploitation by capital.

Butler explains Trump’s fascism in terms of Freud (libidinal economy) not Marx (political economy) because Freud psychologizes class contradictions and turns them into the human condition beyond history, beyond transformation and preaches abnegation and mourning, which sells at a time of crisis when millions are forced into poverty, hunger and death so as to profit the few. But affect has in Butler’s recent writings become even more spiritual – less ‘bodily’ and more ‘ambient’ – it is ‘in the air’ she says – the ‘atmospheric’ condition of ‘spirit’ that mediates the social. She has moved from Bodies That Matter (1995) – the matter of language and signification – to bodies that feel – the matter of sensation and impression – now that the old discourse theory has lost its cachet with the fading of neoliberalism. The discursive play of what ‘matters’ that traces itself through Butler’s writings are badges of class distinction that are taken as signs that she is a ‘subtle’ and above all ‘non-dogmatic’ thinker which shows that she can be reliably called upon to provide the up-to-date ideological cover for what capital requires. Butler’s recent writings on the pandemic therefore display her class allegiance by refusing to penetrate to the root of the issues in class – the economics of the pandemic and the fascist policy of ‘herd immunity’ – and instead set the requisite tone of mourning and melancholia in the lite tabloid style of the popular genre of ‘woke storytelling’.