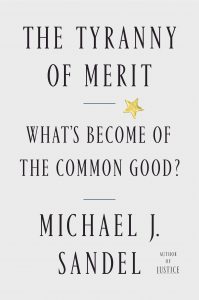 Michael J Sandel
The Tyranny of Merit: What’s Become of the Common Good?

Do I have a right to the wealth I have won through my talents and hard work? Where does that leave those who lost?

In The Tyranny of Merit, Sandel offers a new narrative of the cultural hegemony seen in the USA and the UK today: the meritocracy. While meritocracy has almost become a cliché as an ideal society, it is actually a relatively modern concept. It is often attributed to Michael Young’s The Rise of Meritocracy (1958), which imagined what society would look like if the meritocratic dream were fully realised. Far from an ideal, Young’s dream is a dystopia wherein a meritocratic elite govern as a ruling class, mandated by their superior intelligence and work ethic.

In the 60-year period since the publication of Young’s work, Sandel believes that dream has come to fruition. In the last three decades, parties on both the left and right have embraced globalisation and unfettered economic growth, shifting their traditional project away from equality of condition towards equality of opportunity. However, this shift has not created a more economically equal society: since the 1980s, the higher income percentiles have experienced substantially greater growth than those lower.

Attribution of wealth inequality to the rise of neoliberalism has been well explored in recent years, but Sandel’s novel contribution lies in the examination of the consequences of a meritocracy to social esteem. Beyond the struggle for wealth inequality, Sandel believes that the deeper threat to the common good is that it fosters hubris among the successful and humiliation among the failures.

Sandel presents a thought experiment to illustrate this. Suppose you could choose whether to be born into an aristocracy or a meritocracy with equivalent levels of wealth and inequality. If you knew whether you would be rich or poor in advance, which society would you choose? We may be tempted to assert that the choice does not matter, as our economic status will not change in either. However, when we view the question in terms of the consequences on our own self-perception, an interesting insight can be drawn. An aristocracy is an explicit lottery of birth, and as such, the rich have not earned their wealth. But in a meritocracy, the rich have succeeded through their own merit. Thus, a meritocracy provides validation to the wealth of the rich. On the other hand, the poor in an aristocracy might be comforted in the knowledge that they could have been more successful if they were more lucky, but in a meritocracy, they are compelled to blame themselves for their economic position.

Sandel argues that growing working class humiliation and resentment have led to the rise of populism in recent years. Despite the fact that around two thirds of the populations of the USA and UK lack a four-year college degree, their governments almost entirely consist of graduates from prestigious universities and colleges. Existing narratives that purely focus on the alienation of populist voters due to modernity and globalisation overlook the role of a governing educated elite who have assisted in bringing it about. These are the same elite who have championed equality of opportunity and the platitudes of social mobility and rising. Sandel argues that this rhetoric no longer inspires as it once did, as inequality has only worsened since its introduction. Instead, the disenfranchised have turned to populists such as Trump, who speak bluntly of ‘the little guy’, distancing themselves from the technocratic language of the governing elite.

Capacity for moral decision suffers under a meritocracy. If I know that my success is all my own doing, and that you are wholly responsible for your situation, why should I feel inclined to share my wealth? Compassion and humility come from an awareness that my lot in life results from contingency. The education I receive, the work ethic passed on to me through my upbringing and the innate talents that are valued in an information age capitalism are all subject to the lottery of birth. Rising income inequality in a society of equal opportunity is testament to the fact that success is never down to hard work alone.

The Tyranny of Merit is not an academic work: this would perhaps be contrary to its own thesis. The book calls for an inclusive society that does not restrict political and ethical discourse to those most educated. It uses simple language and is presented with lucidity, drawing evidence from a wide variety of sources including research studies, the frequency of language used by certain politicians and anecdotal experience of an author born in 1953 who has experienced the shift in paradigm first hand.

While Sandel is clearly left leaning, The Tyranny of Merit seeks to be accessible across the political spectrum, attempting to find common ground among concerns by the left and the right on changing values in the era of market globalisation. When Sandel calls for debate on the dignity of work, he appeals to criticism of the free market agenda from a conservative standpoint and the dominance of the financial sector in political decision-making from a progressive standpoint.

But the universal appeal of The Tyranny of Merit is not without issue. It seems at times that Sandel actively attempts to appear uncontroversial. This potentially hides bias and can brush past contentious topics which may have been of importance.

The question of free will particularly stands out as something lacking in exploration. Sandel frequently talks of the allure of meritocracy in that it offers a ‘dizzying’ form of freedom: that we are wholly in charge of our fate. But for half of the book, it is merely asserted that this freedom does not exist. Sandel only briefly touches upon his belief that we are not responsible for our innate talents. The question of the role of effort in success is then designated to being subservient to talent, as he makes comparisons with world-class athletes who owe their success more to natural gifts than simply to hard work.

Freedom is crucial to Sandel’s arguments, more than he gives credit. Sandel focuses almost exclusively on the negative consequences of meritocratic notions of freedom, without exploring whether these notions align with the human experience. But this is incomplete reasoning: the argument that ‘it would be good if X were not the case’ is rendered meaningless if ‘X is necessarily the case’.

The question of free will is controversial, which may be why Sandel did not wish to delve into it. Granted, this could have unnecessarily lengthened and digressed his key theses. However, this does not mean that Sandel should not have declared his bias. The reader can only speculate as to Sandel’s position in the free will debate. It would appear that Sandel maintains freedom and responsibility in moral decision-making, but freedom is at least severely limited in life choices. This is far from an uncontroversial position however, but the reader is implicitly assumed to be in agreement.

Sandel also appears to avoid the language of the left, despite sharing many of their main concerns. We could speculate that Sandel feared that the mere mention of particular thinkers would be likely to scare off any conservative readers. However, I do suspect the similarities between key Marxist concepts and Sandel’s appear a little too uncanny to be a coincidence. The feeling of disenfranchisement felt by the working class is all too similar to Marxist alienation; the meritocratic elite that hold wealth and power are the bourgeoisie class with their principles in competition and striving; Sandel’s solution to meritocracy of contributive justice mirrors the ultimate realisation of man as producer rather than consumer. It can even be argued that The Critique of the Gotha Programme indicated that the movement from socialism to communism is one that abolishes meritocracy: as the distribution according to contribution, seen in socialism, is replaced by distribution according to need in communism, and work becomes ‘life’s prime want’. Yet Marx appears nowhere in the book, and Sandel only very briefly credits Hegel’s struggle for recognition in his discussion of the dignity of work.

Regarding style, The Tyranny of Merit’s clarity does come across as repetitive at times and has some structural issues. A large proportion of the book focuses simply on the diagnosis of the prevalence of meritocracy, which is perhaps less important than the actual critique of the paradigm. Sadly, as with many books of this genre, Sandel’s solutions to The Tyranny of Merit appear only in the closing pages. Sandel’s ‘contributive justice’ as an alternative to the models of societal value posed by Rawls, free market liberals and the Luck Egalitarians, is left largely unexplored.

Nevertheless, Sandel might argue that the principal intention of the book is not to present a manifesto for a replacement society, but to show how deeply meritocracy is entrenched in our culture today and keep possibilities open. Sandel’s book might be better understood as a hermeneutical process, as the same concepts and themes are examined and re-examined to awaken understanding and critical thought in the reader. Sandel calls for reflection and debate over the validity of meritocratic thought: to do this we must first disclose its ubiquity.

Overall, The Tyranny of Merit is a thought-provoking polemic against the growing tide of individual responsibility for economic position. Sandel is primarily motivated by a strong sense of compassion and what is right, which one cannot help but feel compelled towards. For Sandel, the good can only flourish while I show humility in the lot I have in life. To show empathy for my fellow man is not simply to feel pity for him, but to value his contribution to the well-being of all.