Marx & Philosophy Review of BooksReviews‘What Is To Be Done?’ by Louis Althusser reviewed by Constanza Filloy 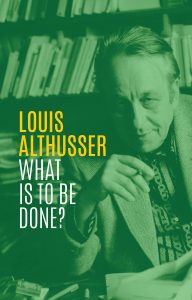 Louis Althusser
What Is To Be Done?

Constanza Filloy is PhD student in philosophy at the National University of Córdoba, researching …

Originally published in French by Presses Universitaries Françaises in 2018, What Is to Be Done? constitutes an unfinished manuscript written by Louis Althusser in 1978, and integrates an important collection of posthumous works deposited with the IMEC (Institut Mémoires de l’Edition Contemporaine). The book, translated and edited by G.M. Goshgarian, contains four chapters which are organized and accordingly entitled by the editor: ‘The “What” in the “What Is To Be Done?”’; ‘The Absolute Empiricism of Antonio Gramsci’; ‘Gramsci or Machiavelli?’; and ‘Gramsci, Eurocommunism, Class Dictatorship’. Following a unified thread, the volume re-examines the 1901 Leninist question (posed by the classic text What Is to Be Done?) by articulating a critical reading of Gramsci’s absolute historicism and its strategic consequences via an analysis of both the Italian philosopher’s theory of hegemony and his reading of Machiavelli’s The Prince. Presupposing the primacy of political practice over theory and underscoring the figure of Lenin’s immense significance for the task of philosophy, the book aligns perfectly with Althusser’s texts written in the 1970s, such as Lenin and Philosophy, How to be a Marxist in Philosophy, and Philosophy for Non-philosophers.

Althusser first analyzes the Leninist theme of ‘the concrete analysis of the concrete situation’(2) to underline the extent to which it is insufficient for the working class to know itself in order to understand the conditions of its exploitation, since Marxist theory must understand the systematic dimension of the labor process to address situations in particular branches of production. Althusser insists on the importance of capturing the ideological struggle operative within the working class for the concrete analysis of the concrete situation. To intervene correctly, says Althusser, one must be able to read the effects of ideology and the existence of ideological class struggle between the dominant ideology and the dominated ideologies in different practices, and in the ‘ideas’ that subsist in the material body of the workers. This orientation seeks to grasp the role that is played by the two poles of the antagonism of class struggle and permits Althusser to pose Lenin’s question in terms of strategy or a political line. Challenging the thesis according to which the immediate concrete situation requires the application of theory regarded as an external element, the concrete analysis of the concrete situation remains an immanent element within the theoretical and ideological means necessary for political struggle.

As the Leninist theme of the ‘concrete analysis of the concrete situation’ becomes relevant, so does a reflection upon history and the concept of the ‘concrete’. The Leninist theme gives Althusser the opportunity to address Gramsci’s absolute historicism and to elaborate his critique of Gramsci as an empiricist. Although Althusser had already been consistently dedicated to delimiting his own concept of history from historicism – specifically in Reading Capital – what we find here is a concise critique of historicism as an empiricist position, and an examination of the implications of such a critique for the concept of history and, above all, for political strategy.

According to Althusser, empiricism states that the object of knowledge coincides with the real object, and identifies the order of genesis in the real with the order of genesis in knowledge (Althusser and Balibar 1977: 40-41). This identification thus fails to provide a proper scientific object of knowledge. In a similar vein, Althusser discloses Gramsci’s empiricism: the Italian philosopher seems to fall into a set of descriptions which do not provide a concept of the mode of production (35). Historicism attempts to focus on ‘concrete’ change, but does not elucidate the conditions of stability – the structures – on which change is possible in the first place (28). The former critique provides the framework for Althusser’s argument throughout the rest of the text: since no precise concept of the mode of production is provided, no positive concept of the ‘infrastructure’ is elaborated. Given this deficiency, Gramsci neglects the question of reproduction, that is, of how the superstructure is connected to the infrastructure in terms of how it reproduces relations of exploitation in the capitalist mode of production. The result is that Gramsci is unable to produce a proper concept of the superstructure, and is therefore unsuccessful in fully grasping what seems to be in the center of his own theoretical concern.

In this analysis of Gramsci’s absolute historicism, Althusser deals with key implications that the concept of ‘passive revolution’ (40) has in the Italian philosopher’s concept of history. Even though ‘passive revolution’ seems to describe heterogeneous processes like the popular Risorgimento, Nazism and Fascism accurately, Althusser claims that it presupposes a difference between the active and the passive in history and an identification of the former with the normal, and the latter with the abnormal. If the concept of passive revolution allows an understanding of how the dominant classes accomplish tasks that the popular masses could or should have developed, Althusser remarks that it may lead to a normative perspective of history.

Additionally, the text delves into the Althusserian controversy with absolute historicism that pertains directly to Gramsci’s political thought. This is perhaps one of the book’s most crucial insights, since Althusser introduces the stakes of his polemic against the Gramscian concept of hegemony. By aiming at the reduction of the problem of class struggle in the state to the struggle amongst hegemonies, and through a bold analysis of Machiavelli’s figure of the Prince, Althusser maps out a set of problems in the Gramscian concept of hegemony concerning the concept of ideology. Althusser points out that by identifying all ideological functions with private institutions in civil society, the concept of hegemony underestimates the ideological effects required and performed by the state apparatus. Nonetheless, the figure of the fox in Machiavelli highlights that the Prince needs to create an ideological representation of himself which is constitutive of state power. Althusser challenges the Gramscian reading of the Prince to find in the figure of the fox the means through which a concept of the ideological state apparatus can be shaped. In other words, this reading of Machiavelli provides a key to deciphering the function of the state through an expansion of the theory of ideology that integrates an analysis of ideology’s productive character, that is, of the positive effects ideology introduces for the category and production of the subject.

While Althusser’s claim that Gramsci does not provide a theory of the infrastructure is accurate, the requirement of providing a theory of the mode of production in order to be included within legitimate Marxist theory is decisively excessive. Namely, the thesis according to which Marx’s Capital and a theory of the mode of production provide the single basis for a contemporary Marxist position seems reductive, regardless of the theoretical vitality and actuality of Capital. Furthermore, the theme of the concrete analysis of the concrete situation and the question of strategy – two of the principle concerns of the book – appear to demand a construction of a contemporary critical position that is based on a contextualised analysis of different moments in Marx’s theoretical production outside of the focus on Capital and would suggest an openness to contributions from other fields of study.

Finally, the book offers some remarks on the concept of the war of position as a strategic consequence of the Gramscian concept of hegemony. The Gramscian idea of war of position follows the thesis according to which working class ideology must become hegemonic before taking power, winning ‘one position after another’ (80), side-stepping a frontal assault on the state. Althusser finds this intuition to be the source of inspiration for a strategy for a democratic transition to socialism in the prevailing tendencies in the French Communist Party. Having built a strong groundwork with the theme of the concrete analysis of the concrete situation, as well as its connection to long and short-term goals in political struggle, Althusser emphasizes that no elements in the conjuncture had yet to justify ‘the war of position’ as an adequate political strategy. This allows Althusser to reflect on the current conjuncture and situation of the Communist International, affirming that it was due to its crisis and to mass uprisings that the war of position had found widespread usage.

There can be no doubt that What Is To Be Done? stands as an important building block in Althusser’s understanding of political theory and as a central text for exploring his divergence with historicism. By analyzing the concept of hegemony as an inflated concept which replaces that of class domination and class dictatorship, this book constitutes an important contribution for current debates surrounding Althusser and Gramsci’s theoretical production, but also for the broader field of contemporary debates concerning the concept of hegemony and political strategy. This remarkable effort indeed contributes, in a robust fashion, to both the formulation and to the response to this perennial Leninist question.