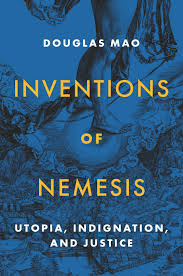 In the introduction to Inventions of Nemesis, Douglas Mao describes the eponymous Tess of Thomas Hardy’s Tess of the d’Urbervilles as ‘halfway to utopian thinking’ (2). The reason he gives for this is Tess’ verdict that she has the misfortune to occupy a ‘blighted’ world instead of one of the other ‘sound’ and ‘splendid’ planets (1). Mao then invites us to consider Samuel Beckett’s one-act play Endgame, where a temporizing tailor shows disdain for the poor quality of a world created by god in six days. It is an original opening to an original book.

What Hardy’s Tess and Beckett’s tailor have in common is that they both show signs of indignation at shoddy craftsmanship, and it is this observation that forms the crux of Mao’s thesis: indignation is a driving force of utopian speculation. The precise kind of indignation Mao has in mind, namely ‘outrage at wrongness in human arrangements’, he calls nemesis – a word which, historically, has been bound up with the ideal of justice (4). Rather than the provision of universal happiness or some other principal aim – ‘comprehensive material well-being, full employment, absolute equality, unbroken public order, and unimpeded freedom of lifestyle’ – Mao posits that ‘the achievement of justice is utopia’s essential project’ (5).

Inventions of Nemesis has three main, interconnected, themes: the relationship between indignation and utopia; the relationship between the concept of justice and utopia; and mobility in work in utopian thought. The book, Mao explains, is ‘essentially descriptive’. Which is to say, its themes ‘emerged’ from Mao’s reading in the literature (10). They were not formulated in advance.

The word utopia is used by Mao to name ‘a much better society that might (vaguely or meticulously) be limned in a prose narrative, poem, screed, theoretical foray, dialogue, daydream, or other form’ (11). It is a broad definition and Mao’s analysis ranges commensurably widely, taking in a huge number of literary and non-literary utopias, canonical texts and many less widely read utopias, emanating primarily from the ‘global North’ – anything from Thomas More and Francis Bacon’s efforts to Ursula Le Guin, Octavia Butler and Chang Rae-Lee’s (10). If the book, however, is explanatory rather than normative, Mao does seek, at the same time, to ‘push back against certain critiques of utopianism’, which he argues are ‘grounded in a simple mistake about utopia’s character’, namely the idea that utopia is about the totality, society itself, rather than the individuals or groups of people who compose it (12, 15).

In order to make this claim Mao argues that for justice to exist, there must first be recipients of justice. If utopia is centrally about delivering justice, giving people what they are due, it is about delivering justice to determinate subjects of one kind or another. The radically conditioned societies imagined by critics of utopia reverse, in other words, ‘the relation between utopia and persons that gives utopia its rationale’ (136).

Mao’s discussion of the concept of justice is perspicacious and he sees ‘the kind of passion for justice in an expansive sense that animates’ John Rawls’ staggeringly influential nonrealist work of political philosophy, A Theory of Justice, as indistinguishable from utopian endeavour: not simply because Rawls’ ‘original position’ of a ‘veil of ignorance’ is ‘extravagantly utopian’ in its sweep and difficulty of realization, like the ‘difference principle’ which arises from it, but because it also ‘points to a correction of wrong arrangement by a means of a redesign of the social mechanism’ (46, 46-7).

Following J. K. Fuz’s distinction between ‘utopias of measures’ and ‘utopias of men’, Mao divides utopias into two types: managerial utopias and transformative utopias (7). The first devise new social arrangements taking human character as it is, or as the author finds it. The second takes for granted the malleability of human nature and devise their plans accordingly with fewer self-imposed feasibility constraints. Most utopias, Mao observes, ‘mix the two styles’ (88). Yet it is possible to discern nonetheless a trajectory from managerial to more transformative utopias, reaching a high water mark with B. F. Skinner’s Walden Two.

The term Mao uses to describe the outrage at the ostensible hubris of utopian thinkers is counterindignation. The transformative utopia, he rightly remarks, has been particularly inflammatory to antiutopians and his discussion of counterindignation yields some of the book’s most interesting and relevant analysis. By way of Aldous Huxley’s Brave New World, via Hannah Arendt and The Matrix, and through to Robert Nozick’s Anarchy, State, and Utopia, among other sources, Mao considers questions concerning the fate of authenticity under the kind of utopia advocated by Skinner: where human spontaneity is absent, so, too, is utopia, on Mao’s idiosyncratic reading.

Mao thus exonerates transformative utopias from the accusation that they compromise freedom. A utopia that predetermines its inhabitants’ life courses in an effort to attain perfection is not a utopia at all. He also contests the charge of futile eccentricity levelled at some utopian inventors by Fredric Jameson, arguing that ‘aesthetic admiration’ and close attention to detail are not in conflict with the impulse of utopian indignation, but are instead a manifestation of a utopian visionary’s ‘outrage at injustice’ (58). The ‘follies thrown up by utopian Fancy’ ought not, in other words, to be lampooned automatically (67).

Inventions of Nemesis is a well organised book, and Rawls, Nozick and Jameson all reappear in its final chapter. Taking Plato’s Republic as a starting point, Mao shows how ‘utopian writing has not always ascribed great value to the freedom to switch occupation’ (150). Yet utopias, according to Mao, have been just as concerned with ‘the distribution of roles in production and administration’ than with a proper distribution of goods (150). Where utopian thinkers like William Morris, H. G. Wells and Aleksandr Bogdanov have endorsed variety of occupation, what this involved, in turn, was freedom of movement, and Mao charts the rise in the nineteenth century of the world-state-sized utopia.

Aided by the fall of the Soviet Union, globalization, and the emergence of identity politics, Mao argues that the character of utopian fiction shifted again in the 1970s. For Mao, Nozick and Jameson are exemplars of this turn, each arguing, from different perspectives, that ‘utopia will consist of utopias’ (190). In the 1970s, globalism and centralisation gave way, in short, to localism and decentralisation, to postmodern decentering and a growing sensitivity to horizontal power relations. Yet Mao skilfully shows how the retreat from visions of a world-state was not a retreat from cosmopolitanism. On the contrary, with the rise of global justice theory – the attempt, according to Mao, ‘to scale up to the level of the world the principles Rawls enumerates for a just society’ – cosmopolitanism received a new lease of life (204). If this kind of utopian thinking was less concerned with choice of occupation, its notion of justice was grounded in absolute freedom of movement.

As the above summary demonstrates, Inventions of Nemesis is undoubtedly an extremely interesting book. It is, however, replete still with inconsistencies, weak argumentation and omissions. The claim Mao makes, for example, for the centrality of indignation as a source of motivation in utopian and antiutopian thinking is simply asserted, rather than empirically demonstrated. Mao constructs his argument on the basis of what he finds in the various texts he examines, rarely making recourse to other sources of evidence that might have provided better insight into such matters: correspondence, nonutopian texts, and other marginalia. Thus Mao confidently situates Brave New World squarely within the tradition of counterindignation that he has invented, whereas Huxley himself described his younger self, the author of his fable, as an ‘amused, Pyrrhonic aesthete’. One can only wonder how atypical this discrepancy is.

Staying with Huxley for a moment, Mao fails to mention Island, a text which complicates his argument concerning a movement towards transformative utopias. Other major absences include a proper discussion of Cold War liberals such as Isaiah Berlin, Karl Popper and Judith Shklar’s objections to utopianism or the more recent reconciliation between strands of realism and utopian thought. It would be true to say that Mao is notably defective on the question of unintended consequences, stating that ‘no utopias have yet existed’, whilst acknowledging at the same time the ‘irony’ in Bolshevism’s proclaimed anti-statism and the state’s actual exponential growth after the October Revolution of 1917 (88, 178). Again, one suspects that a greater familiarity with liberal critiques of utopia would have provided a more nuanced account, and later Mao himself refers to the ‘Soviet utopian experiment’ (194).

Finally, then, another major flaw in Mao’s thesis, connected to this one, concerns his treatment of Marx and Marxism. Here, above all, perhaps, Mao’s argument is at its weakest. For if utopia is about the realisation of justice, then Marx is not a utopian thinker. Marxism, as construed by Engels, was famously scornful of utopian speculation, adopting the view that solutions to social problems are delivered by history rather than designed by individuals or groups. But, more importantly, Marx and Engels did not condemn capitalism in the light of a principle of justice. It is a complicated issue, but, broadly speaking, Marx and Engels thought of themselves as merely engaged in disinterested analysis, yet Mao neglects to attend to this aspect of Marx’s thought and its vast scholarly literature. For similar reasons, we are offered only superficial analyses of thinkers such as Morris and Wilde. Mao deals clumsily, for instance, with the former’s relation to the concept of human nature, and the latter’s strident antiauthoritarianism is, likewise, not brought out where it should be (31, 108).

Inventions of Nemesis is an unconventional book. It is at once both profoundly under-researched and spectacularly erudite, both astoundingly ambitious and not ambitious enough. Mao, certainly, cannot be faulted for his knowledge of the literature on justice. From Aristotle to Elaine Scarry, Mao is remarkably well-informed. When it comes, however, to the broader literature on the various utopian texts he discusses, Mao often comes up short. Given, then, that Mao’s appreciation of utopian literature so frequently lacks nuance and does not advance our understanding of the individual texts, it should not be surprising to find that his meta-argument, lacking a firm foundation, is ultimately unconvincing. A less abstract approach would no doubt yield somewhat different results. That said, for its verve and novelty alone, the book has much to recommend it and should be widely read.