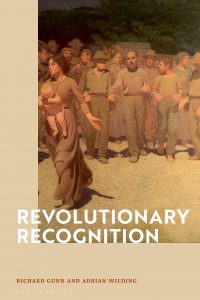 Terence Holden is a lecturer in humanities in the core program of Kadir Has University, Istanbul. …

We are presented here with a work which makes a timely intervention within our contemporary political and philosophical landscape. It in essence proposes an idea, mutual recognition, as a potential rallying cry for the global left. In seeking to bring this potential into sharper relief, Wilding and Gunn undertake a project of retrieval, reconstructing a novel understanding of this idea from within a highly contested tradition.

We are guided in the first chapter back towards the work of a younger Hegel harbouring the vision of an anarchist concept of recognition prefigured in the reciprocity and unconstrained interaction of the revolutionary crowd. To arrive here, we are encouraged to abandon an interpretation of Hegel’s corpus as a harmonious whole, a perspective which has typically favoured ‘reactionary’ reconstructions. The counterpart of this revolutionary concept of recognition is Hegel’s critique of the different forms of ‘contradictory’ recognition or ‘misrecognition’, which likewise come into focus once holism has been jettisoned. Most strikingly, the critique of ‘institutional recognition’ is foregrounded by the authors, a gesture rendered possible only once we turn from the Philosophy of Right as privileged angle of approach.

The second chapter unfolds a narrative whereby Marx enriched this Hegelian undercurrent of anarchic or revolutionary recognition, rather than rebelled against recognition as part of a package which comes with the later Hegel. Recognition is used as an interpretative key this time for bringing out the underlying unity between the earlier and later work of Marx. Indeed, the bold claim is made that recognition serves as a fulcrum upon which the whole of Marx’s work turns and it is used to reframe key concepts. Exchange, property and class relations are put through its filter: all become symptoms of ‘contradictory recognition’ or components of a realm where ‘behind a relation of apparent recognitive equality lies a relation of recognitive inequality’ (36).

By this stage in Revolutionary Recognition we have a theoretical standard for critiquing subsequent contributions for their divergence from the anarchist strain of recognition present in early Hegel and Marx. The prime targets in the third chapter are Honneth and Taylor: the multiculturalist background which informs the interpretation of both, we are told, results in an impoverished view of recognition as a finite and quantifiable resource to be shared equitably, rather than an ever-present underlying social reality. From here we arrive at the familiar complaint of the blunting of the critical edge of recognition and the confinement to a merely ameliorative horizon within which it is no longer possible to rethink fundamentals. The distinct contribution of Revolutionary Recognition lies in the sense it gives of what is thereby lost. The model espoused by Taylor and Honneth does not simply cut itself off from the full potential inherent to the concept itself, Gunn and Wilding argue; it latches onto a form of recognition within the social world which is alienated or contradictory in essence: to be precise, it latches onto the ‘institution recognition’ targeted by the early Hegel, which is to say recognition based on membership of a group, or participation within reified institutional structures and social spheres.

In chapter 4 we are given a foothold within the contemporary for the empirical prefiguration of the anarchically inflected model of recognition elaborated in this work at a philosophical level. The authors are of the firm opinion that the most potent expression of the dynamic of revolutionary recognition is to be found in the recent spontaneous uprisings which have taken place across the globe: ‘the movement of the squares’, which share amongst other features a transcending of institutional hierarchies and cultural allegiances. Recognition is, accordingly, recast less as a fundamental preposition underlying the cycle of social reproduction, as it is in the work of Honneth for example, and more as a fulguration which fleetingly makes its appearances in such radically democratic and non-hierarchical emancipatory movements. This reorientation has important practical consequences: revolution, we are told, must prefigure from within what it aims towards, and as such must itself be non-hierarchical in its organization.

Chapter 5 shifts the ground towards ecological considerations, where we find a somewhat precarious balance between ‘red’ and ‘green’ politics proposed through the prism of recognition. No recognition-based model for our relation with the environment is, or perhaps could be, elaborated. Instead, the knock-on effect of a society which has overcome relations of ‘one-sided’ and ‘unequal’ recognition will be a transformed relation to nature freed from domination. The practice of ‘commoning’ concomitant with the demise of private property, viewed as the mode of production which gives most natural expression to mutual recognition, is conceived as the tertium quid where the emancipatory relation to others and to nature come into greatest proximity.

The clarity of purpose of the authors is one of the most admirable qualities of this work, and amidst a diversity of engagements with philosophical traditions the reader is never unclear as to how it all fits together. There is, nevertheless, a confusion over terminology. We are presented with both the idea of ‘contradictory recognition’, a recognition which ‘does not and cannot achieve what it seeks’ (22), and ‘misrecognition’. In places it is suggested that these terms are interchangeable (23); at other moments, however, a distinction and indeed hierarchy begins to emerge. Contradictory recognition appears to imply above all relations of inequality for which the master-slave dialectic serves as archetype, whereas misrecognition lends itself more naturally to the critique of institutional recognition and the reification or installation of a second nature which it implies (26): were the dangers of the former to be neutralized, the dangers associated with the latter would still exist; ‘reciprocity’, we are told, ‘is a necessary but not sufficient condition of mutual recognition’ (27). More work is needed to draw out the specific sense of each form of inadequate recognition, and the dynamic across which they are mutually reinforced. I would suggest that ‘misrecognition’ is a more promising candidate for drawing out the full implications of the lineage intimated in this book which passes from Hegel to Debord.

Further uncertainty arises over how the rapprochement effectuated between the mutual recognition of Hegel and the communism of Marx produces a definition of freedom ‘in and through relation with others’, differing substantially from the definition of social freedom which Honneth’s proposes in Freedom’s Right. Is it simply a question of the conditions under which recognition is to be realized or is there something fundamentally different about the nature of this recognition to begin with? Pursuing principally the former interrogation, the authors propose a recognition which takes place outside any institutional framework or social sphere in the sense of the Geistigen Massen imbued with a pejorative sense in the Phenomenology of Spirit. Yet if freedom is essentially social in nature then why should it be inherently antithetical to integration within institutional frameworks? What exactly is the concept of the social which is implicitly brought into play here? Greater attention should be accorded to what it is in the dynamic of recognition which privileges expression through collective uprisings rather than institutional forms: in other words, it requires a deeper phenomenological analysis of the nature of social freedom beyond the mere invoking of the inherently ‘unpredictable’ character of recognition (106).

Misgivings can also be given over the one point on which Gunn and Wilding concur with Honneth. It is not clear why the authors any more than Honneth should opt for a ‘monism’ of recognition: that ‘there is nothing social that is not in some way an issue of recognition’ (79). They like him pay the price for this stance in the somewhat constrictive anthropocentric approach adopted when seeking to engage normatively with the non-human world. Given that it is the climate crisis which demonstrates most vividly just how out of sync the capitalism system is with the needs of our time, surely we can do greater justice to nature’s intrinsic value while also valorizing the rallying potential contained within the idea of recognition.

Yet on the whole the shift in perspective proposed by Gunn and Wilding is more than welcome. One cannot help get the impression that Honneth is clutching at straws in his normative reconstruction of the institutional landscape of modernity, a suspicion echoed in numerous works over recent years. If recognition is to do the work that anyone who invests in the concept believes it should, then a surplus which carries us beyond this horizon is certainly required, and Gunn and Wilding give us some valuable insights into what this surplus might be. My instinct would be to follow the authors in placing the locus of recognition in the more ‘fluid’, incendiary and incandescent forms of dynamics such as protest movements, the ‘sunbursts’ of recognition, rather than seek a solid social ontological foundation as Honneth does when seeking to engage directly with the contemporary in all its ambivalence.

Debates over recognition often assume a markedly genealogical character, the occasion for a memory war over the reimagining of the tradition of critical theory. For some recognition amounts to no more than a distraction or capitulation to liberal society, indeed some kind of social illusion embedded within it: recognition from this perspective should be rejected out of hand, and we should instead seek to recover from the roots of the revolutionary tradition an alternative arch-concept. While being strongly critical of certain interpretations of recognition, Revolutionary Recognition traces a more delicate path, identifying important ways in which the recognition paradigm may recall and advance moments within this tradition. Connections such as those suggested between Hegel, the early Marx, Debord and Bauer provide highly stimulating prompts which are well worthy of further exploration. Its deft negotiation of the space of experience inherited from the past in turn serves as the basis for a clear-sighted projecting of the horizon of expectation for future political engagement.