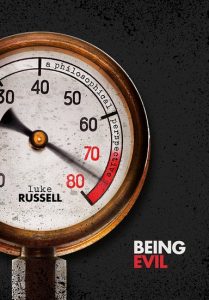 Perhaps no character in the works of William Shakespeare better personifies our conception of evil than does Richard III. Yet if we examine the way in which Shakespeare employed the term ‘evil’ in this play, we can see that this word has never been exclusively attached to matters considered the ‘worst of the worst.’ For example, Richard, in the very first scene, says of his brother, the king, ‘O, he hath kept an evil diet long, / And overmuch consumed his royal person.’ Here, we may simply substitute the word ‘bad’ and achieve the same meaning. Never is Richard himself, despite being the object of so much hatred in the play, described as evil. In fact, the application of the word ‘evil’ to an extreme moral wickedness does not arise in the English language until the eighteenth century. There is some irony in this, given how we project this sense backward in time, especially in popular culture, with a common trope of horror movies consisting of hapless individuals unleashing ‘ancient evils’ upon the world. Likewise, when we employ the word to describe more modern atrocities, such as the Rwandan Genocide, we still reflexively conceive of their perpetrators as representing the spirit of an earlier time, something more akin to the state of nature than civilization under the social contract.

Suffice to say, the term ‘evil’ is wrapped up in numerous contradictions as regards to its own history and how we employ it at present, leaving us with an ongoing debate not only about what actions or individuals deserve to be described as evil, but whether, in fact, the term describes anything at all or should best be dispensed with. As Luke Russell writes in Being Evil, ‘[a] philosophical analysis of the concept of evil must be able to make sense of the fact that some intelligent and well-informed people believe that evil is real, while others believe that evil is a myth or dangerous fantasy’ (6). Russell’s book offers a very brief overview of the chief debates confronting philosophers surrounding this very complex issue, addressing such issues as the viability of the concept, the role of psychological states as being determinative of evil, and the ongoing debate over the idea of the ‘banality of evil.’

Russell does not indulge in any of the ‘unconstrained metaphysical theorizing’ that surrounds the subject of evil, especially as represented by the theologians, but instead insists upon drawing his examples from real-world events that often attract the label of evil. Thus, he insists, those ‘who are sceptical of the existence of evil must also be willing to point to real acts of terrorism, serial killings, and war crimes, and explain why none of these count as evil’ (16). In his second chapter, he lays out the challenge of formulating an account that addresses the unique quality of evil actions: ‘A good philosophical account of evil action will consist in a definition of evil action that is both true and explanatory; a definition that accurately describes the nature of evil actions, and allows us to see how they differ from actions that are not evil’ (23-4). Is evil merely an extreme wrong? Must evil evoke a response of moral horror? Must the motives underlying such deeds be unfathomable to most people?

Russell addresses these and like questions, beginning with a focus upon the psychology of the agent as the possible distinction between evil and non-evil acts. While many wrong acts are not necessarily malicious and would not count as evil, Russell notes, ‘[w]hen an act is malicious, the agent wants the victim to suffer not merely as a means to producing some outcome that is good for the victim. Rather, the malicious agent simply wants the victim to suffer, or wants harm to come to the victim for its own sake’ (49). Malice, however, is not sufficient to ascribe evil to an action, given, as Russell observes, that extreme moral wrongs can be perpetrated for purposes non-malicious, such as the board of a pharmaceutical company marketing a drug with potentially lethal side effects simply to increase profits, not because they bore a special ill-will toward their consumers. Neither is outright sadism sufficient to ascribe evil to a particular action. Russell concludes his survey of ostensible psychological hallmarks thusly: ‘If the concept of evil action is supposed to capture the class of most extreme wrongs, then there is significant cost to including specific motives in the definition of evil action’ given that ‘we can always find examples of extremely wrong actions that lack one of the purported hallmarks of evil’ (66-7).

Next, Russell devotes a chapter to the challenges posed by Hannah Arendt’s concept of ‘the banality of evil,’ as developed during her observation of the trial of Adolf Eichmann in Jerusalem. First, Russell corrects Arendt’s representation of Eichmann, noting that ‘the public face that Eichmann presented in the trial was a carefully cultivated image of the obedient bureaucrat,’ whereas he had previously expressed undying satisfaction at his role in the death of millions of Jews and only regretted that he had not been able to kill more (75). However, this alone does not undermine Arendt’s core concept, for it does remain that extreme moral wrongs can be committed thoughtlessly by ‘people who are not radical outliers in terms of human psychology,’ so that a determination of evil need not necessarily be predicated upon motive (77). As he delves into the issues raised by Arendt’s challenge to more traditional definitions of evil, Russell formulates his own final view: ‘An action is evil if and only if it is a wrong that is extremely harmful for at least one individual victim, where the wrongdoer is fully culpable for that harm in its extremity, or it is an action that is appropriately connected to an actual or possible extreme harm of this kind, and the agent is fully culpable for that action’ (86-7).

As a definition goes, it certainly attempts to cover all the objections one might throw its way, but by so doing, it ends up a bit overwrought. Moreover, Russell devotes significant space to what exactly it means to be ‘culpable’ of an evil act, engaging with the views philosopher Claudia Card presented in her 2005 book, The Atrocity Paradigm: A Theory of Evil. However, responding to the criticisms her book attracted, Card moved on and, in her 2010 book, Confronting Evils: Terrorism, Torture, Genocide, offered an altered definition of evil as consisting of a reasonably foreseeable intolerable harm produced (maintained, supported, facilitated, tolerated, etc.) by inexcusable wrongdoing. The shift from culpability to inexcusability was a tremendous advance in theorizing about evil, given that one can be fully culpable in committing an act of wrongdoing but still have a moral excuse. In fact, Russell’s definition seems to mirror Card’s, with the phrase ‘fully culpable for that harm in its extremity’ being relatively equivalent to something like ‘lacking a moral excuse.’ But his focus upon parsing out the necessary level of culpability required to make an action evil means his definition is much less concise than Card’s revised one – and much less usable for analyzing what Johann Galtung dubbed ‘structural violence,’ or the evils that are part and parcel of the systems that underlie our civilization.

Russell missteps somewhat in his next chapter, too, when he asks the question of whether or not we can speak of not just evil deeds but evil people. Here, he writes, ‘[e]vildoers have shown a lack of humanity in the sense that their actions revealed a lack of kindness and respect for their fellow human beings’ (93). In her 2018 book, Down Girl: The Logic of Misogyny, philosopher Kate Manne critiqued this sort of humanist fallacy by noting that leveling extreme wrongdoing against another need not require conceiving of that person as somehow less than human. In fact, violence and oppression can be justified by an understanding another’s humanity. After all, recognizing another as fully human is not simply embracing them as a potential friend – it is also recognizing them as a potential competitor for resources or a rival for affection. Recognizing them as fully human means acknowledging that they possess internal states in which they may hold similar views of you, too, and might it not be best, in this case, to strike first?

In the end, Being Evil, while not the most fully satisfying account of its subject, does nevertheless offer a brief overview of some of the core issues that confront philosophers and other thinkers who attempt to tackle the matter of evil. Moreover, his own conclusions speak to certain truths about individual and collective psychology that we are sometimes loathe to engage. ‘By becoming aware of our susceptibility to authority figures and unified mobs,’ he writes, ‘we can guard against our own worst tendencies.’ But not all of us, for some people ‘give us clear evidence that they are unrepentant, that they remain strongly disposed to perform the morally worst kinds of actions, and that they are highly resistant to our best attempts to lead them to a process of moral reform’ (124, 125). Too great a skepticism of the concept of evil would remove from our moral vocabulary an important descriptive tool for capturing the nature of those, be they serial killers or CEOs, whose lives are consciously devoted to wrongdoing. Whatever the shortcomings of the book, Being Evil nonetheless makes a cogent argument for preserving the concept for our own collective and individual moral betterment.